Curing malignant carcinomas is a grand ambition in the development of human health. Over the past decades, targeted therapies have become one of the most successful ways of achieving this. Of these approaches, small molecule inhibitors and monoclonal antibodies are two major methods, however several barriers to their development and clinical use still exist. PROTACs (proteolysis targeting chimera) induced targeted protein degradation has emerged as a novel therapeutic strategy in drug development and attracted the favor of academic institutions, large pharmaceutical enterprises, and biotechnology companies. PROTACs opened a new chapter for novel drug development.

Comparison of PROTAC and Other Therapeutics

The mechanism of action of PROTAC is different from traditional drugs. Most small-molecule inhibitors and antibody drugs are competitive- and occupancy-driven process, that is, by binding to the active site of the target protein, or by competing with the endogenous substrate to play the role of inhibiting the function of the protein or enzyme. This has higher requirements on the affinity between the drug and the target protein and the half-life of the drug. Small-molecule interfering RNAs play their roles by gene silencing to regulate genes. However, RNA has a short half-life and is easily degradable. Although GalNAc-coupled RNA technology in recent years has successfully achieved liver targeting and improved the escape rate of RNA, in general, the delivery of RNA drugs is still a problem.

The History of PROTACs

PROTACs technology was first proposed in 2001. The research group of Crews and Raymond Deshaies synthesized the first batch of PROTACs bifunctional molecules to induce the degradation of MetAP-2. The E3 ligase recognition ligand is a decapeptide. This laid the foundation for the first generation of PROTACs - PROTACs designed based on peptide fragments. Following MetAP-2, Crews' research group has successively designed PROTACs that target the degradation of MetAP2 and androgen receptors. After microinjecting these molecules into cells, they found that they could specifically bind to the target protein and degrade the protein. And they also found that the target protein recognition ligand is not limited to inhibitors, agonists can also play the role of degradation of the target protein. However, it is not satisfactory that the first-generation PROTACs contain peptide sequences, resulting in relatively high molecular weight, labile peptide bonds, poor cell penetration, and low potency which was typically in the micromolar range. These shortcomings make peptide-based PROTACs poor pharmaceutical candidates.

To avoid the weaknesses of peptide-based PROTACs, all small-molecule-based PROTACs, in which E3 binding ligands are also small molecules, were created. The first small-molecule PROTAC was reported in 2008. This PROTAC includes a non-steroidal androgen receptor ligand which is a selective androgen receptor modulator (SARM), a MDM2 ligand known as nutlin, and a PEG-based linker. The SARM-nutlin PROTAC triggered the ubiquitination and degradation of androgen receptor.  Cell-level experiments show that the PROTAC molecule can effectively degrade androgen receptors at a concentration of 10 μmol/L. Although the drug activity is not high, compared with the first-generation PROTACs, the drug-forming property is improved. In 2012, Crews' research group designed a series of hydroxyproline derivatives based on HIF-α1. These molecules can bind E3 ligase VHL with high affinity. The molecular weight of the optimized ligand was reduced to 400 Daltons, and the drugability was further improved. In 2013, the first discovery of a PROTAC molecule that can efficiently degrade the target protein in the cell at 1 nM. In 2015, Crews' research group and GSK developed a PROTAC molecule that targets the degradation of serine/threonine protein kinases, and uses a small molecule VHL as a recognition ligand for E3 ligase to degrade target molecules at low nanomolar levels. In addition, the James Bradner team found that thalidomide can bind to the E3 ligase CRBN, and they designed a PROTAC molecule that targets the degradation of the BET family based on this. These molecules have been shown to effectively degrade target proteins at the level of humanized tumors in cells and mice. So far officially set off the R&D boom of PROTACs.

Recently, light control PROTAC technology has also become a research hotspot. Achieve the time-conditioning control of the PROTAC molecule by manipulating the light. In 2019, an article on JACS successfully constructed the light-regulated PROTAC molecule, which can effectively control the degradation of Brd4 and BTK under 365nm light. In 2020, light-controlled PROTAC molecules were designed in two back-to-back articles on Science Advances. By adding a photosensitive group on the ligand, the degradation of ALK fusion protein and BRD can be achieved under visible light/UV irradiation. 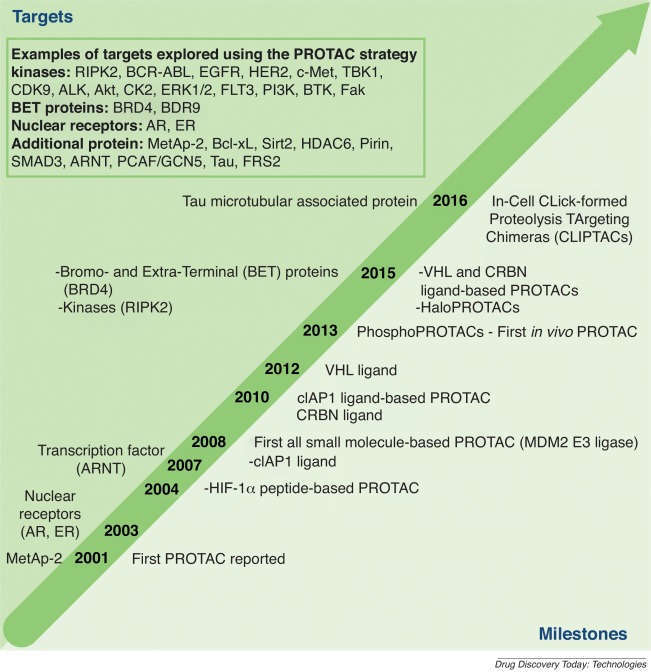 As of today, the research of PROTACs not only targets classic drug targets (estrogen and androgen receptors, protein kinases, etc.) but also includes transcription factors and protein skeletons. In the future, it is expected to play a role in the treatment of various diseases, of which the treatment of cancer is most worth looking forward to. In addition, PROTAC is also involved in virus infection and immunity.

PROTACs have opened a new chapter for the development of new drugs and novel chemical knockdown tools and brought unprecedented opportunities to the industry and academia, which are mainly reflected in the following aspects:

At present, traditional small molecule drugs and antibody drugs can only work on about 15% of protein targets, and the remaining 85% of protein targets make scientists helpless and difficult to design effective drugs. The reason why these targets are undruggable is mainly due to their structural limitations. Their active sites and their nearby surfaces are smooth and flat, and they lack pockets that are conducive to the binding of small molecules. Moreover, many proteins are located inside the cell, and it is difficult for macromolecular drugs to enter the cell. PROTAC is expected to break this deadlock thanks to its unique mechanism of action. As mentioned above, the role of PROTAC is different from that of traditional drugs that rely on the tight binding of molecules and target proteins, which mainly depends on the ligand-induced proximity of E3 ligase and target protein.

The emergence of targeted drugs prolongs the survival time of cancer patients and improves the quality of life of patients, but these drugs can cause acquired resistance problems, resulting in poor treatment of patients with the disease. A part of the resistance comes from the mutations generated during the treatment, such as EGFR produces T790 mutation, BTK produces C481S mutation. Although drug developers are constantly designing a new generation of targeted drugs for these resistance mutations, it is difficult for new generation drugs to avoid the emergence of new drug resistance. The characteristic of PROTACs degrading target protein provides a new idea for solving the problem of drug resistance. Taking the example of overcoming drug resistance caused by ibrutinib, 80% of patients with chronic lymphocytic leukemia will develop C481S mutation after receiving ibrutinib treatment. In 2018, Crews' research group developed the PROTAC molecule MT-802, which can effectively overcome the C481S resistance mutation produced by ibrutinib. In 2019, Rao Yi and other scholars designed a protein targeting BTK based on CRBN ligands that can effectively degrade various clinical mutant BTK proteins and overcome the resistance to ibrutinib caused by BTK mutations.

3) Eliminating both the enzymatic and nonenzymatic functions of the kinase.

PROTAC's ability to degrade proteins gives it the ability to clear target proteins, which means it not only affects not only the enzymatic activity of the protein but also nonenzymatic activity. For example, in addition to the kinase domain, the FAK protein also has a scaffold region, which in addition to participating in the exercise of FAK kinase activity, also affects the function of the plasma membrane and plays an important role in the process of tumor invasion and metastasis. In 2018, Crews's research group designed a highly efficient and selective FAK degrading agent. Compared with devatinib, PROTAC molecules can simultaneously clear the kinase activity and scaffold function of FAK, which significantly reduces the ability of cancer cells to move.

Although PROTAC technology has a bright future in drug development, it also has many challenges as follows:

1) Expansion of E3 ligase and its ligand.

The length of the linker and the site of attachment to the ligand will affect the selectivity and degradability of PROTACs. An article published by Pfizer in PNAS shows that BTK protein degradation can be achieved by regulating the length of the linker. This may be due to the change in the linker resulting in the change in the contact interface between the target protein and E3 ligase. In addition, linker may affect PROTAC's cell permeability, tissue distribution, metabolism/elimination. Therefore, it is very important to optimize the linker to maximize the synergy with the ligand, but there is currently no theoretical basis to guide the design. Based on the length and connection position of the eutectic linker, it is possible to provide direction and basis for the linker design.

The commonly used linkers in the development of PROTACs are PEGs, Alkyl-Chain and Alkyl/ether. Biochempeg provides multi functionalized PEG derivatives as PROTAC linkers. The following products can act as PROTAC linkers.

The formation of ternary complex is the key to PROTAC degradation of target protein, but the Hook effect will occur when the concentration of PROTAC molecule is high. PROTAC can interact with E3 ligase ligand and target protein ligand to form a binary complex, resulting in a decrease in degradation activity. Therefore, the drug concentration of PROTAC should be regulated.

For traditional small molecule drugs, the five principles of drugability can be used to make a preliminary judgment, but for PROTAC, this rule is no longer applicable. PROTAC is equivalent to a dual-target drug. The molecular weight of the drug is larger than that of ordinary small molecule drugs, which can be more than 700 Daltons, and some can even exceed 1000 Daltons, which may affect the water solubility and permeability of the molecules. However, some studies have shown that PROTAC has excellent solubility and can even cross the blood-brain barrier.

In addition, traditional PK and PD properties may not be suitable for PROTAC. The catalytic properties of PROTAC and the relatively complex triplet structure may make the tissue distribution not follow the traditional pH distribution theory, and there may be target-mediated drug disposal (TMDD) phenomenon that leads to the complexity of PK/PD. However, there are few relevant in vivo tests, and the PKPD model for PROTAC has not been established.

Off-target is the biggest concern about PROTAC's safety. The mechanism of action of PROTAC is to use the ubiquitin-proteasome pathway to clear proteins. If non-target proteins are unfortunately cleared, serious adverse reactions may occur. And experiments have proved that the PROTAC molecule based on CRBN can induce the degradation of zinc finger protein.

In addition, ubiquitination markers not only play a role in protein degradation, but also participate in methylation, acetylation, and phosphorylation processes. Whether the removal of the target protein will create new safety hazards, and whether the cells can still perform normal physiological functions require our attention.

All in all, the PROTAC molecule looks modular, but it is not simple to design a drugable PROTAC molecule. The three components need to be continuously optimized to achieve the best combination. In addition, the adverse reactions that occur in preclinical studies should be closely monitored. Basic research on E3 ligase is expected to help PROTAC's drug development.

The commonly used linkers in the development of PROTACs are PEGs, Alkyl-Chain and Alkyl/ether. As a reliable PEG derivatives supplier, Biopharma PEG provides multi functionalized PEG derivatives as PROTAC linkers.