Nano Drugs: Let The Blood-Brain Barrier No Longer Be A "Barrier"

Release date：2020/7/16 11:15:44
The blood-brain barrier (BBB) is the most sensitive and complex organ in the human body, protected by the BBB membrane. The BBB membrane protects brain neurons from harmful and toxic substances present in the blood, and also affects the diffusion of drugs into brain tissue.

Including nanoparticles (NP) and their combination with polymer coatings can overcome BBB and promote drug delivery to the CNS. This technology has been gradually applied in the diagnosis and treatment of neurological diseases, brain cancer, and trauma. Nanocarriers can effectively inhibit the progress of central nervous system diseases such as malignant brain tumors due to the characteristics of promoting the targeted delivery of chemotherapeutic drugs. Many therapeutic polymers used to treat cancer and other diseases are being studied in clinical use. 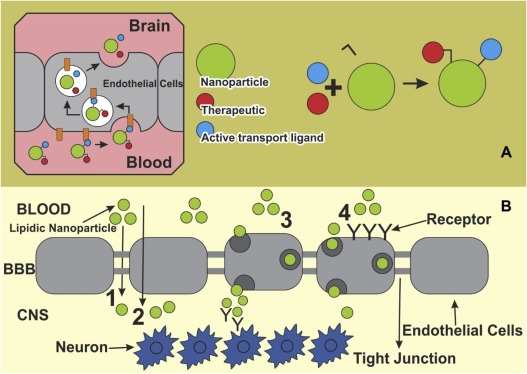 Figure 1. The main way for the nanosystem to cross the blood-brain barrier, Image source: sciencedirect.com
A: The therapeutic ligand that is actively transported on the blood-brain barrier (BBB) is bound to the nanoparticles and then transported into the BBB.
B: Schematic diagram of various pathways of NP passing through BBB to the brain. 1) Paracellular pathway 2) Transcellular pathway 3) Endocytosis 4) Receptor-mediated endocytosis

Highly lipophilic and small molecules can diffuse passively in BBB. The lipophilicity is usually closely related to the permeability and solubility of the compound. However, lipophilicity is a double-edged sword. Certain drug parameters are affected by lipophilicity. High lipophilicity may lead to the formation of compounds with a fast metabolism, low solubility and poor absorption. In this case, nanotechnology can be used for drug delivery. NP and nanostructures must have certain properties before they can be used to deliver drugs to the CNS. 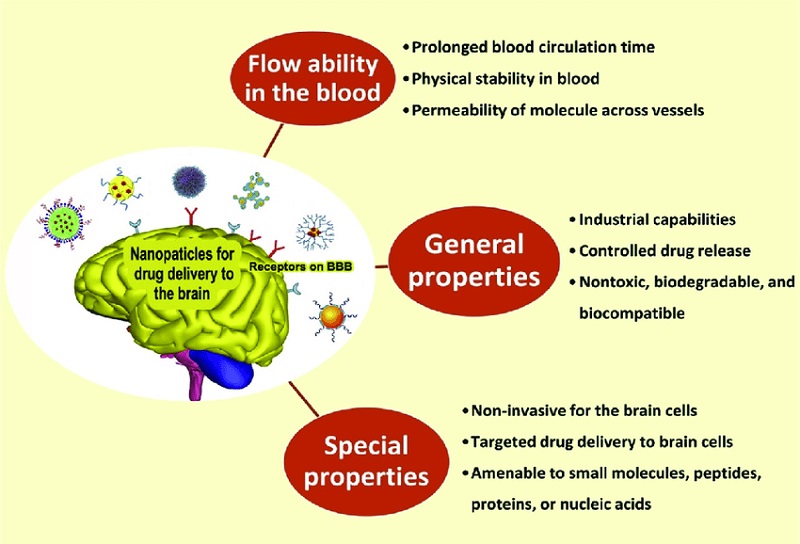 Lipid NP was discovered by Müller and Gasco in 1961. These NPs include solid lipid NP (SLN), nanostructured lipid carriers (NLC) and liposomes. Lipid NP can be used as a carrier for drug delivery systems. Compared with other colloidal carrier systems, they have many advantages, such as drug encapsulation, prolonged drug release, improved physical and chemical stability, and the effective incorporation of lipophilic drugs in the lipid cores of SLN and NLC. Many studies have focused on the use of liposomes. The surface of liposomes is modified with polyethylene glycol (PEG) and will not be recognized and eliminated by the mononuclear phagocyte system in the liver and spleen. The biological half-life of pegylated liposomal doxorubicin in the human body is close to 50 hours. Liposomal doxorubicin is authorized to treat ovarian cancer, AIDS, cocci sarcoma (multicentric tumor angiogenesis) and metastatic breast cancer. The encapsulation of the drug in lipid NP prolongs the distribution time of the drug in the blood, reduces the side effects of the drug, and increases the therapeutic effect on CNS diseases.

NP is being developed to control drug release and protect it from enzymatic or chemical degradation to enhance its therapeutic efficacy, such as gentamicin calcium carbonate nanoparticles, ciprofloxacin hydrochloride calcium carbonate nanoparticles. There are also several types of NP that can be used to deliver drugs and genes to the CNS. NP pharmaceutical preparations have been greatly developed to promote effective delivery of insoluble drugs to brain tumor cells. In addition, the surface of NP is often modified with PEG to enhance the stability of the colloidal solution and prolong its maintenance in the body.

In recent years, polymer micelles have been developed for drug delivery. These micelles spontaneously form in the amphiphilic copolymer solution and show a shell-core structure, which is composed of a hydrophobic block polymer as the core (for example, L, D-lactopolycaprolactone) and a hydrophilic block polymer as the shell (usually PEG). Polymer micelles are characterized by a particle size of 10-100 nm. The core can be loaded with water-insoluble drugs. These structures improve the stability and bioavailability of the drug. The micelle shell protects the drug from interacting with serum proteins and non-target cells. The loaded drugs are released through the diffusion mechanism after reaching the target cells, which makes the system useful for delivering drugs to the brain and CNS.

Nanogels are nanoscale polymers that can form ionic or nonionic chains, such as polyvinylamine and PEG, or polyacrylic acid and polyoxyethylene-polyoxypropylene-polyoxyethylene triblock copolymers (Pluronics). Due to the characteristics of both hydrogel and NPs, hydrogel NP belongs to a specific drug delivery system. The main advantage of these nanogels is their high loading capacity (40–60%), which other NPs cannot usually achieve.

Modifying the surface of the nanogel with transferrin and insulin can enhance the distribution of the blood-brain barrier. According to in vivo studies, nanogels increase the absorption of oligonucleotides in the brain while reducing their absorption in the liver and spleen. Nanogels are usually promising drugs for transport, which can deliver drugs to the central nervous system.

Nano-level modification of the physical, chemical and biological properties of many drugs makes them suitable for the treatment of diseases of the central nervous system. Carbon nanotubes (CNT) are cylindrical nanostructures based on carbon with one or several layers of carbon, which are classified as single-wall and multi-wall CNTs, respectively. These carbon-based NPs are valuable in medicine. Carbon nanotubes have special chemical, mechanical and electrical properties.

CNTs in pure and modified (through various polymers) forms have been evaluated. The formation of nanotube-neural hybrid network can promote neuron activity, signal network communication and synapse formation. The maintenance of the interaction between carbon nanotubes and stem cells introduces a new perspective to the application of these carbon-based nanoparticles in the design and manufacture of neural tissue through cell simulation.

NP is very suitable for the diagnosis and treatment of brain diseases due to its physical, chemical and biological properties. The ability to use this technique to treat and diagnose central nervous system diseases is promising. Using polymer-based technology and nanomaterials, several nanosolutions are being focused on improving drug delivery to patients with central nervous system diseases.

Biochempeg, as a leading PEG supplier in the USA, provides high purity PEG derivatives for researchers to modify the nanoparticles, micelles and more to help the drug delivery to the central nervous system.