So far, small molecules and macromolecules, including antibodies, have become the most pursued substances in drug screening and development efforts. Although they have many advantageous characteristics as drugs, these molecules still have limitations and are not complementary in many regards. Recently, peptide-based chemical structures that lie between these two categories in terms of both structural and functional properties have gained increasing attention as potential alternatives. In particular, cyclic peptides provide a promising scaffold for the development of a novel drug class owing to their adjustable and expandable ability to bind a wide range of target molecules.

Cyclic peptides are polypeptide chains taking cyclic ring structures, which plays a very important role in natural products. Cyclic peptides are a class of peptide molecules with stable and uniform conformation. They have a high selective affinity for receptors, strong metabolic stability, and high oral availability. As a drug molecule, cyclic peptide has a wide range of biological activities such as anticancer, antiviral, antibacterial, antifungal, and enzyme inhibition. In recent years, as the discovery and synthesis technology of cyclic peptide molecules has become more and more mature, the drug development of such molecules has also attracted more and more attention, and certain progress has been made.

Cyclic peptides have achieved great success in drug therapy. Common cyclic peptides include hormones and hormone analogues Oxytocin, Octreotide and Vasopressin; antibiotics such as Vancomycin, Daptomycin, and Polymyxin B; immunosuppressant Cyclosporine, etc. So far, there are more than 40 kinds of cyclic peptide drugs in clinical applications. On average, about one cyclic peptide drugs enter the therapeutic market every year. The reason why cyclic peptides show their talents in the field of drug research and development is related to several characteristics.

In 2006-2015, the FDA and EMA have approved nine cyclic peptide drugs, which account for only 3% of the new drugs that entered the market in this time period. Four of these cyclic peptides, telavancin, dalbavancin, oritavancin, and anidulafungin, are employed in bacterial and fungal infections. Three peptides, lanreotide, romidepsin, and pasireotide are oncology drugs, and one, linaclotide, is specific for gastrointestinal disorders. The last drug, peginesatide, was approved by the U.S. FDA on March 27, 2012 for the treatment of anemia during dialysis. Structurally, the drug achieves dimerization through PEG molecules, thereby increasing its affinity with proteins and the half-life in the blood. Regrettably, it was withdrawn one year after approval due to safety concerns. Unlike all other drugs mentioned above, Peginesatide is the first cyclic peptide drug to adopt a de novo strategy.

Among the 9 approved cyclic peptide drugs mentioned above, eight have similar mechanisms of action to established drugs and only one, linaclotide, is a first-in-class drug. In addition to being highly innovative and applicable to large patients, Linaclotide is also eye-catching in terms of sales. It generated revenues of 460 million USD, improving upon the already impressive sales of 140 and 300 million USD in the two first years after approval. Lanreotide and Romidepsin are two other drugs that perform equally well, with sales reaching 440 million and 70 million US dollars in 2015, respectively. 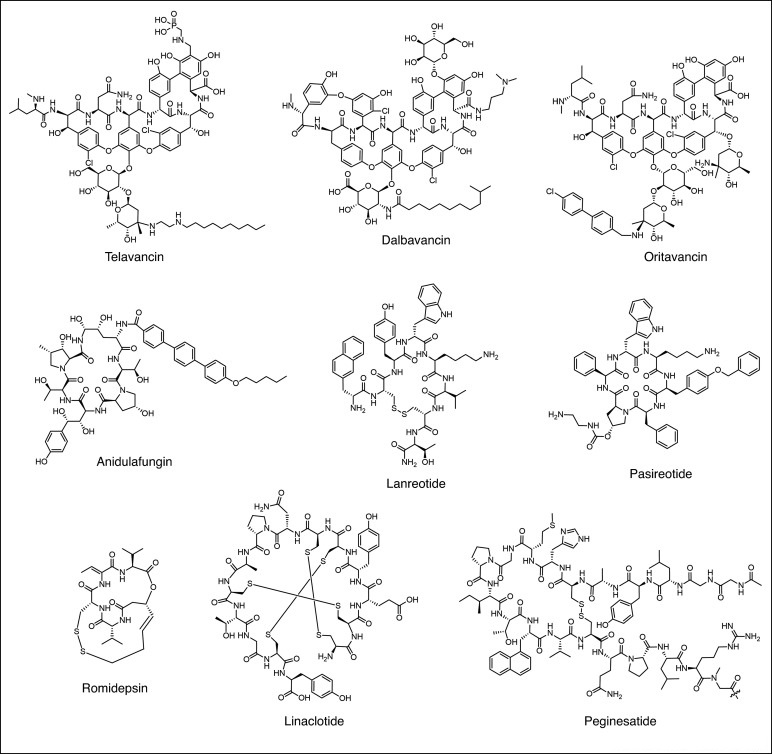 There are several cyclic peptides currently in clinical development for a variety of indications as highlighted in Table 2 below.

VyleesiTM (bremelanotide) is a cyclic peptide derivative being developed by Palatin Technologies for female sexual arousal disorder (FSAD). Vyleesi is a synthetic analog of the naturally occurring hormone α-Melanocyte-Stimulating Hormone (α-MSH) which targets the melanocortin 4 receptor. In 2018, Palatin’s North American licensee for bremelanotide, AMAG Pharmaceuticals, submitted a New Drug Application (NDA) to the U.S. Food and Drug Administration (FDA) for Vyleesi for the treatment of hypoactive sexual desire disorder in premenopausal women.

Apellis Pharmaceuticals is developing APL-2 for the treatment of paroxysmal nocturnal hemoglobinuria, geographic atrophy, autoimmune hemolytic anemia and other indications. APL-2 is a cyclic peptide conjugated with polyethylene glycol (PEG) polymer that can target complement factor C3 (a protein of the immune system). In 2019, the FDA granted APL-2 fast track designation for the treatment of patients with paroxysmal nocturnal hemoglobinuria.

BioMarin Pharmaceuticals is developing BMN 111 (vosoritide) for the treatment of achondroplasia (the most common form of dwarfism). Vosoritide is an analog of a small cyclic peptide called C-type natriuretic peptide (CNP), which is a positive regulator of bone growth. The analog peptide is an atrial natriuretic peptide receptor 2 agonist. BioMarin expects that by the end of 2019, their current phase III study of vosoritide in children will have the top-line results.

For the application of cyclic peptide drugs, there are still many challenges, the two most important of which are oral availability and cell permeability. The introduction of some innovative research strategies in recent years has partially solved the above-mentioned challenges, including including the application of cell penetrating peptides, the stabilization of peptides in -helical conformations with nhydrocarbon linkers, or the in vitro evolution of N-methylated peptides. In order to develop cyclic peptide drugs that have good oral availability and can efficiently enter cells through passive diffusion, it is necessary to consider selecting molecules with smaller molecular weight and fewer peptide bonds as candidates. It is foreseeable that the combination of in vitro evolution technology and de novo design strategy with random peptide library screening will surely produce more and more new cyclic peptide drugs.