An Inconspicuous Nevus Is Likely To Evolve Into A Malignant Tumor: Melanoma

Release date：2020/9/22 10:30:08
Melanoma, also known as malignant melanoma, is a type of skin cancer that develops from the pigment-producing cells known as melanocytes.

Melanoma is a malignant change of pigmented nevus, which is developed from borderline nevus or mixed nevus. Chronic irritation and inappropriate treatment are strongly associated with the transformation of moles into melanoma, although not necessarily malignant. Melanoma is highly malignant and occurs mostly in the skin, but also in different parts or tissues such as mucous membrane (including visceral mucosa), ocular uveium, pia meninges, etc. In China, it tends to occur in the extremity skin (plantar, toe and end of finger, etc.) and mucous membrane (nasal cavity, oropharynx, and digestive tract, etc.). 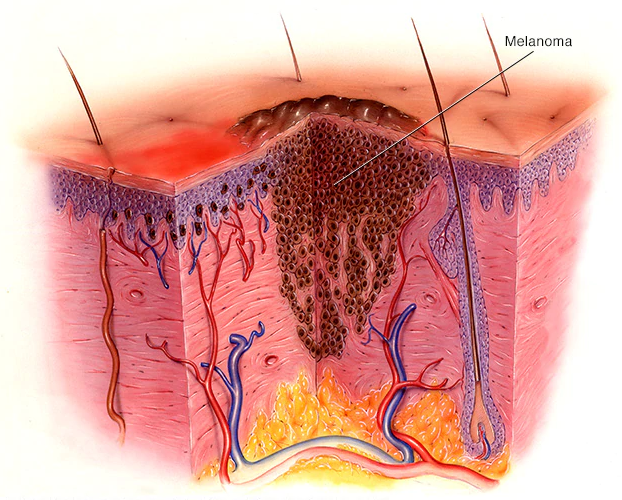 Although the incidence and mortality of melanoma are not so high, it is increasing year by year at a rate of 6% to 7%. According to the report of the American Society Of Clinical Oncology (ASCO), it has become one of the fastest-increasing tumors. Especially in China, the incidence of melanoma is increasing rapidly. In August 2018, it was learned from the Melanoma Expert Committee of Peking University Cancer Hospital and the Chinese Society of Clinical Oncology (CSCO) that the detection rate of melanoma in China has increased, with new occurrences about 20,000 cases every year. The mortality rate is also rising rapidly year by year.

Melanoma may occur in all age groups, and it is more common in the 50-55 age group, with a male to female ratio of 1.21:1. Those with fair complexion, multiple nevus (>50) or dysplastic nevus, history of severe sunburn, family history of melanoma should be more vigilant, they are more likely to develop melanoma.

Melanomas are usually caused by DNA damage resulting from exposure to ultraviolet light from the sun. It may be the basic cause of melanoma formation.Normally, skin cells develop in an orderly and controlled manner, with healthy new cells pushing old cells towards the surface of the skin, causing them to die and eventually shed. When DNA damage occurs in some cells, new cells may start to get out of control and eventually form a large number of cancer cells.However, the exact cause of skin cell DNA damage and the mechanism of melanoma are still unclear. Various factors such as environment and genetics may also plays a role. Melanoma can also occur in skin areas with little sun exposure (i.e. mouth, soles of feet, palms of hands, genital areas). People with dysplastic nevus syndrome, also known as familial atypical multiple mole melanoma (FAMMM), are at increased risk for the development of melanoma.
The one who having more than 50 moles indicates an increased risk melanoma might arise. A weakened immune system makes it easier for cancer to arise due to the body's weakened ability to fight cancer cells.