Bilirubin is a linear tetrapyrrole molecule, a very effective and powerful antioxidant pigment found naturally in mammalian blood serum. It is an orange-yellow pigment that exists in the liver and is the final product of heme catabolism. At the end of a red blood cells’ (RBC) lifetime, they undergo lysis. In this process, hemoglobin is degraded, and the heme part is oxidized by an enzyme called heme oxygenase to form biliverdin. Biliverdin is a green molecule that is reduced by an enzyme called biliverdin reductase (BVRA) to form bilirubin. This process occurs in the reticuloendothelial cells of the liver, spleen and bone marrow. The bilirubin is finally carried to the liver through the blood and performs various biological functions in the liver. Bilirubin is known for its anti-inflammatory and antioxidant properties and is negatively related to cardiovascular risk. Bilirubin quenches reactive oxygen 10 species (ROS) and gets converted into biliverdin, which is converted back to bilirubin through BVRA enzyme. This recycling property makes bilirubin a very effective protective agent against cell oxidative damage. A number of human and mouse studies have shown that higher serum bilirubin levels can prevent cardiovascular disease, non-alcoholic fatty liver disease, colorectal cancer, and ischemia-reperfusion injury after liver transplantation. Bilirubin has been shown to be an effective antioxidant immunomodulator for the treatment of experimental autoimmune encephalomyelitis. 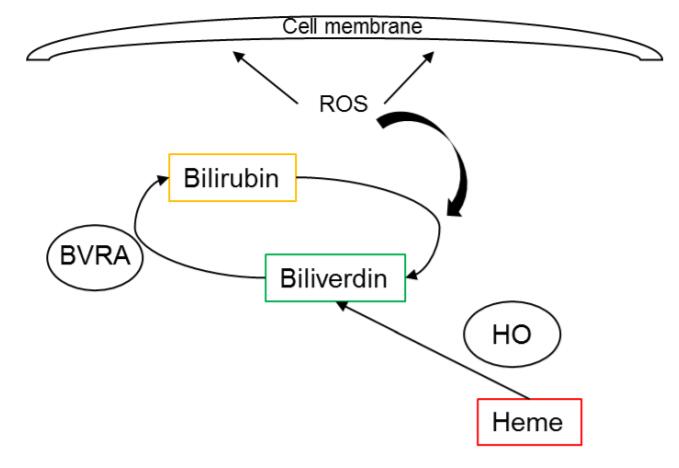 Although bilirubin has shown effective antioxidant and anti-inflammatory properties, its clinical application has been limited due to its insolubility and short half-life. In order to take advantage of the therapeutic properties of bilirubin, some researchers have developed water-soluble conjugate of bilirubin and polyethylene glycol (PEG), called bilirubin nanoparticles (BRNPs). PEG is an active ingredient approved by the FDA. Conjugation with PEG or PEGylation can be used to improve the pharmacokinetic activity of various FDA-approved drugs (such as peginterferon alfa-2a for hepatitis C). PEG forms a stable amide bond with bilirubin to form PEGylated bilirubin (PEG-BR). Since bilirubin is lipophilic and PEG is hydrophilic, the final product PEG-BR is amphipathic, and it can self-assemble to form micellar-like structures or bilirubin nanoparticles. The size of the nanoparticles in the freeze-dried state is about 100 nm, and retains the properties of bilirubin while being water-soluble. Under light stimulation, BRNP becomes a photoisomer of bilirubin. Equally and more importantly, under the action of oxidative stress (such as ROS), BRNP turns into biliverdin or oxidized fragments of bilirubin.

Recent studies have shown that due to its freeradical scavenging properties, BRNP selectively accumulates at the site of inflammation and tissue damage in dextran sodium sulfate induced colitis in murine model. In mice, pre-treated with BRNP, pathological changes associated with ischemic reperfusion were found to be significantly less as compared to mice that were treated with vehicle. Similarly, BRNP treatment showed significant benefits in mouse models of other inflammatory conditions, 12 such as asthma, pancreatic islet xenotransplantation, and even as a conjugate for anti-cancer therapy.

Biochempeg is one of the professional PEG derivatives suppliers to supply PEG linkers (such as mpeg36-NH2) to covalently bound to the carboxyl group of bilirubin to form PEGylated bilirubin nanoparticles. This is an efficient way to make bilirubin soluble in water while retaining its own therapeutic effects.

Related Articles:
What are the Uses of PEG Derivatives & Polyethylene Glycols (PEGs)
Things About PEGylation Technology and Biopharmaceuticals You Should Know
​FDA Approved PEGylated Drugs