The Role of PEGylated Materials In 3D Bioprinting

Release date：2021/2/5 6:58:47
Three dimensional (3D) bioprinting has emerged as a promising new approach for fabricating complex biological constructs in the field of tissue engineering and regenerative medicine. What is 3D Bioprinting? What are bio-ink materials for it? How does it work and what are the applications of it?

3D Bioprinting uses 3D printing–like techniques to combine cells, growth factors, and biomaterials to fabricate biomedical parts that maximally imitate natural tissue characteristics. It is a form of additive manufacturing that uses cells and other biocompatible materials as “inks”, also known as bio-inks, to print biological structures layer-by-layer that mimic the behavior of natural living systems.

This technology is widely used in the fields of medicine and bioengineering. Recently, this technology has even made progress in the production of cartilage tissue for reconstruction and regeneration.

Essentially, bioprinting works similarly to conventional 3D printing. The digital model becomes a physical 3D object layer by layer. However, in this case, a live cell suspension is used instead of thermoplastic or resin.

Bioprinting is the actual printing process in which bioink is placed in a printer cartridge and then deposited according to the digital model.

Post-printing is the mechanical and chemical stimulation of printed parts to create a stable structure for biological materials.

Bio-ink is a material used to produce engineered/artificial live tissue in 3D printing. It contains living cells and biological materials that mimic the extracellular matrix environment. It supports cell adhesion, proliferation and differentiation after printing.

3D bioprinting allows for the spatially-controlled placement of cells in a defined 3D microenvironment. Bioinks are formed by combining cells and various biocompatible materials, which are subsequently printed in specific shapes to generate tissue-like, 3D structures.

Although a variety of materials are used for bio-inks, the most popular ones include gelatin methacryloyl (GelMA), collagen, polyethylene glycol (PEG), Pluronic, alginate, and decellularized extracellular matrix (ECM)-based materials.

PEG is a synthetic polymer synthesized through the polymerization of ethylene oxide. It is an ideal synthetic material because of its customizable but typically strong mechanical properties. The advantages of PEG also include non-cytotoxicity and non-immunogenicity. However, PEG is biologically inert and needs to be used in combination with other biologically active hydrogels.

Biochempeg is a worldwide PEG supplier which supplies varieties of PEG derivatives to empower biochemical drug research & development. We are able to supply AC-PEG-AC( also called PEGDA) which can be used as bio-inks for 3D Bioprinting. We aslo supply RGD, an additive suitable for most bio-inks which plays an important role in 3D cell culture, tissue engineering, and organ manufacturing.

3. How Does 3D Bioprinting Work? 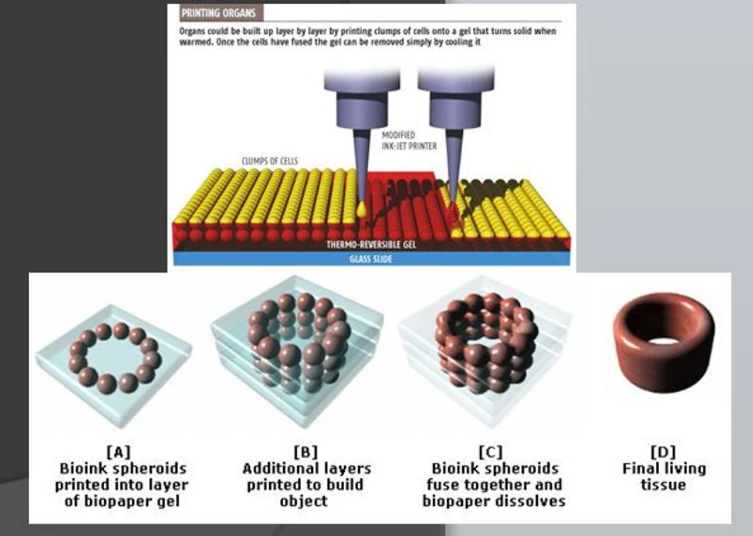 3D bioprinting starts with a structural model, which is recreated layer by layer with bio-ink mixed with living cells or seeded with cells after printing. These starting models can come from anywhere-CT or MRI scans, a computer generated design (CAD) programs or files downloaded from the internet.

The 3D model file is then fed into the slicer-a special kind of computer program that analyzes the geometry of the model and generates a series of thin layers or slices that form the shape of the original model when stacked vertically.

After slicing the model, the slice is converted into path data and stored as a g-code file, which can then be sent to a 3D bioprinter for printing. The bioprinter follows the instructions in the g-code file in order, including instructions to control the extruder temperature, extrusion pressure, bottom plate temperature, cross-linking strength and frequency, and control the 3D movement path generated by the slicer. Once all the g-code commands are completed, the printing is done and it can be cultured or seeded with cells as part of biological research.

4. Why Is 3D Bioprinting Important? 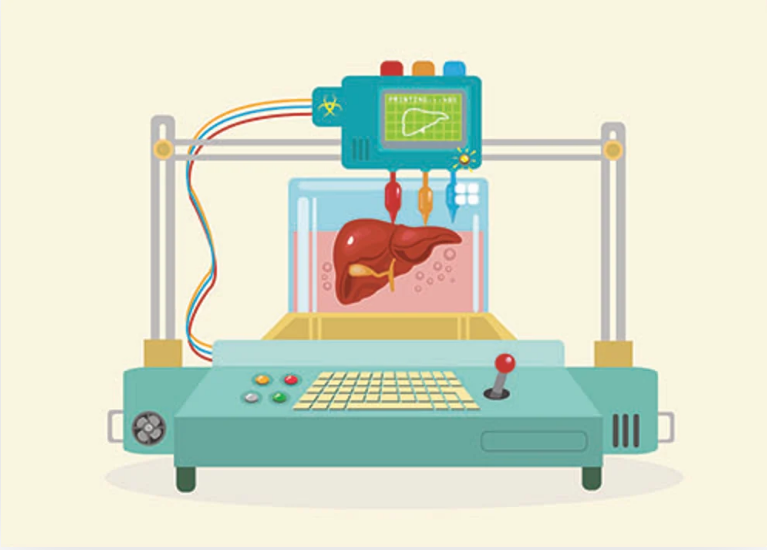 The greatest importance of bioprinting is to mimic the final tissue-like structure of the actual micro and macro environment of human tissues and organs. This is critical in drug testing and clinical trials, for example, it can greatly reduce the need for animal trials.

When the living tissues and organs of the human body are not needed, this new technology offers other huge opportunities. One example is the use of artificially-influenced tissues to test treatments for diseases.

The process can also eradicate headaches associated with organ donation and transplantation. In addition to the lack of available organs, the entire process has also been criticized from a moral and ethical perspective.

Organ replacement is the main goal, but at the same time tissue repair can also be performed. With bio-ink, it is much easier to solve problems at a specific patient level, thereby simplifying operations.

For pharmaceutical development, 3D bioprinting offers a means of testing drugs faster, at a lower cost, and with better biological relevance to humans than animal testing.

5. What Are The Applications of 3D Bioprinting?

Here are a few of the main application areas of bioprinting:

1. Due to the high incidence of vital organ failure, artificial organs are one of the greatest driving forces of this technology. The availability of 3D printed organs helps to solve organ-related issues faster and faster, which is crucial for patients, their families and the medical system.

2. Developing tissue for pharmaceutical testing is a more cost-effective and ethical option when 3D printing is done.It also helps identify drug side effects and allows recommended drugs to be administered to humans with validated safe doses.

3. Cosmetic surgery, especially for plastic surgery and skin graft surgery, also benefit from this technology. In this particular application, bioprinted skin tissue can be commercialized. Some 3D printed tissues have been bioprinted for research on therapeutic purposes.

4. 3D Bioprinting also be applied in bone tissue regeneration as well as prosthetics and dental. There are various other uses and applications of 3D Bioprinting, including producing foodstuffs such as meat and vegetables.

3D Bioprinting contributes to significant advances in the medical field of tissue engineering by allowing for research to be done on innovative materials called biomaterials.