Nearly a century since insulin entered clinical use, more than 80 peptide drugs have been approved for the treatment of various diseases, including diabetes, cancer, osteoporosis, multiple sclerosis, HIV infection and chronic pain.

A hundred years after the discovery of peptide drugs, especially in the past 60 years, rapid development has been achieved, but the development of new drugs in this field is also facing new challenges.

Although the field of peptide therapy began with the first extraction of insulin from the animal pancreas in 1922, it was only in the 1950s that the scale of peptide production was expanded through liquid-phase chemical synthesis of peptides, which really took an important step in industrialization.

In determining the importance of peptides as new drugs, as well as their remarkable efficacy, selectivity and low toxicity, their limitations were also exposed, including low oral bioavailability, low plasma stability and short circulation time. In addition, liquid-phase chemical synthesis of peptides takes months to years, and the high cost of large-scale peptide production makes most pharmaceutical companies prohibitive. Therefore, only peptide hormone agonists that are effective at low doses are commercially viable. This has led to limited interest in peptides by the pharmaceutical industry and stalled the development of peptide drugs.

It was not until the invention of solid-phase peptide synthesis (SPPS) in 1963 and the development of purification technology that the field really entered the fast lane of development.

However, the use of peptides as subtype-selective probes for receptor research and continued development as lead compounds laid the foundation for the second wave of peptide drug development that began in the late 1980s. This time, the peptide drug development boom has been supported by venture funds and biotechnology companies. Human insulin and gonadotropin-releasing hormones leuprolide and goserelin (approved in 1985 and 1989, respectively) synthesized by recombinant technology (approved in 1982) have achieved commercial success, confirming the feasibility of peptide drugs and advancement of drug delivery system technology. Therefore, the number of new peptide drugs that entered clinical trials from 2000 to 2010 was almost twice that in the 1990s. 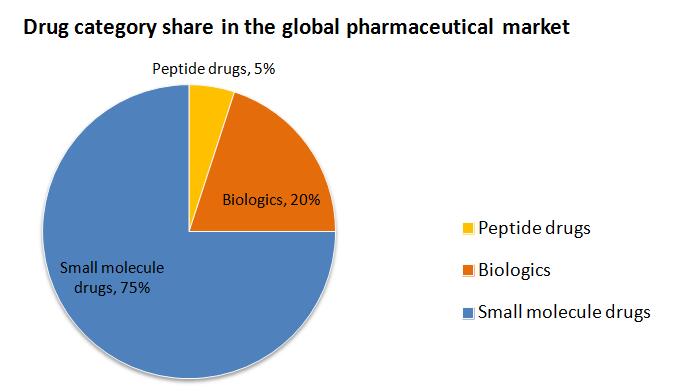 At present, about 80 peptide drugs have been approved for marketing in the global market. The biopharmaceutical industry is steadily conducting research on new peptide drugs. There are more than 150 peptides in clinical development, and 400-600 peptides are undergoing preclinical research. With the increase of investment and research in the peptide field, peptide synthesis technology is becoming more mature, and it is expected that the peptide therapeutic drug market will continue to maintain its growth momentum.

Although great progress has been made in the field of peptide drugs, there is still much room for improvement and new development in overcoming key challenges.

Unmodified peptides are quickly cleared from the plasma (within a few minutes). Therefore, strategies to increase the molecular weight of peptides, such as lipidation, coupling to larger proteins, and pegylation, will greatly increase their circulation time in the blood.

Drugs that use lipid-binding moieties in approved peptide drugs include C14/16/18 fatty acids linked to insulin detemir, insulin degludec, liraglutide, and semaglutide to produce longer-acting analogs. They can be administered once a day or once a week (such as semaglutide).

Selective binding of serum albumin or immunoglobulin (two plasma proteins with unusually long circulation times, up to several weeks) is another strategy that extends the action time by exceeding the molecular weight cut-off of glomerular filtration. This strategy is used in drugs such as albiglutide and dulaglutide to extend the half-life, allowing for weekly injection.

In addition, in the past two decades, the PEGylation of polyethylene glycol (PEG) chains attached to peptides or proteins are gaining momentum. The FDA has approved a variety of PEGylated proteins (such as PEG-adenosine deaminase and PEG-α-interferon).

Most peptide drugs are administered by injection, so there are some disadvantages, including poor patient compliance, accidental injury, risk of infection, improper use, and waste of biohazard needles. Therefore, the development of alternatives based on needle injection has become a top priority.

Methods of delivering drugs to the skin without injections include needle-free injection (jet injection). However, needle-free injections may cause pain and bleeding at the injection site, and there are differences in the amount of drug delivered, partly due to differences in skin characteristics between patients. Other methods include methods aimed at temporarily destroying the structure of the skin, such as the use of permeable polypeptides, and the use of ultrasound or electric fields to increase skin permeability. The microneedle technology used to deliver insulin or abaloparatide is in phase II and phase III trials, respectively.

Pulmonary route administration is another potential delivery route for peptides, but it has the problems of safety and limited delivery efficiency. Inhaled insulin (Pfizer's Exubera) was approved by the FDA in 2006, but production was discontinued in 2007 due to safety considerations and high costs. With the development of the world's second inhaled insulin product, MannKind's Afrezza (approved by the FDA in 2014), we hope to reawaken people's interest in the route of administration, but Afrezza still has potential safety hazards, and its side effects include coughing or throat irritation. . Nasal delivery is another possible route of delivery of peptides, and desmopressin can be used as a nasal spray. However, like the pulmonary route of administration, the impact of long-term delivery on sensitive mucosa is still worthy of attention. Therefore, these delivery routes may be more suitable for occasional use; for example, glucagon can be used as a dry nasal spray to treat severe hypoglycemia.

At present, the pharmaceutical industry has invested a lot of energy in developing strategies for peptide drugs to be administered orally. This pathway is limited by enzymatic digestion in the gastrointestinal tract and its limited penetration in intestinal epithelial cells. One of the strategies to overcome these obstacles is to co-formulate with penetration enhancers, which has been clinically successful. In 2019, the FDA approved the formulation of semaglutide and the penetration enhancer N-[8-(2-hydroxybenzoyl)amino]caprylate (SNAC) for oral administration once a day for the treatment of type 2 diabetes. SNAC is a small molecule fatty acid derivative, which can promote the absorption of semaglutide on the gastric mucosa by influencing the transcellular pathway. In June 2020, the FDA approved Chiasma's oral administration of octreotide product Mycapssa, which uses transient permeability enhancer (TPE) technology, as long-term maintenance treatment for patients with acromegaly who are effective and tolerant to octreotide or lanreotide treatment. This drug is the first and only oral somatostatin analogue (SSA) approved by the FDA.