Application of Hydrogels in Biomedical Fields

Hydrogel is one of the main topics in the research of biomaterials. Hydrogel is a three-dimensional polymer network that is capable to absorb large amounts of water or bi­ological fluid in the body due to the presence of hydrophilic groups in their structure.

Application of Hydrogels in Biomedicine

Hydrogels of highly hydrated polymer networks are similar to ECM and has attracted widespread attention in tissue engineering and regenerative medicine applications. They can be applied as space-filling agents, as delivery vehicles for bioactive substances or as three-dimensional structures that organize cells and present stimuli to ensure the development of a required tissue. So far, various types of hydrogels derived from natural or synthetic polymers have been used to reconstruct defective cortical bone joints or articular cartilage tissues. 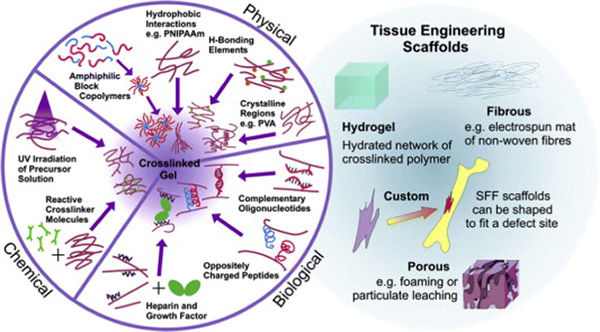 Hydrogels are widely used as debridement agents, moist dressings, and paste ingredients for wound care. However, they do not require more wound fluid to turn into a gel and are suitable for dry wounds.

The so-called "moisture donor" function of hydrogel helps autolytic debridement, increase the production of collagenase and the moisture content of necrotic wounds. They can absorb and retain the contaminated exudate in the gel through the expansion of the cross-linked polymer chain, thereby isolating bacteria, debris and odor molecules in the liquid. Their high water content allows vapor and oxygen to be transmitted to wounds such as pressure sores, leg ulcers, surgical and necrotic wounds, lacerations and burns. Due to their cooling and hydrating effects, they seem to play an important role in emergency burn treatment alone or in combination with other products. Hydrogel dressings are also used for granulation cavity wounds. Amorphous gels are usually reapplied daily, while flaky hydrogels are usually changed 2-3 times a week.

Related Article: Application of Polyethylene Glycol (PEG) In The Field Of Medical Devices

Table. Examples of hydrogels and hydrogel sheets as wound dressings.

In order to deliver drugs, the porous structure of hydrogels can provide a matrix for drug loading while protecting the drug from harsh environments. In addition, this porosity can be controlled by changing the crosslink density of the gel matrix. The release rate is another important parameter of the drug carrier, which mainly depends on the diffusion coefficient of the molecule through the gel network, and can also be adjusted according to specific requirements. By designing certain chemical and physical structures for hydrogels, biocompatibility and biodegradability can be obtained. All these properties give hydrogels great potential for drug delivery.

One of the successful examples of hydrogels for drug delivery is Cervidil®, a vaginal insert for cervical ripening, which has been on the market since 1995. Such controlled-release preparations have been used to induce or bring on labor in patients at or near the time of delivery. Each insert contains 10 mg of dinoprostone (prostaglandin E2 or PGE2) in 271 mg of cross-linked polyethylene oxide/urethane polymer at a rate of approximately 0.3 mg/h over a period of 12 h. The drug release is triggered by the hydrogel swelling when placed in a moist vaginal environment.

Scheme of drug release through a hydrogel membrane in a reservoir system.

Hydrogels are widely found in everyday products, but their potential has not been fully explored. These materials have played a good role in the contact lenses, hygiene products, and wound dressing markets, but commercial hydrogel products in tissue engineering and drug delivery are still limited. Many hydrogel-based drug delivery devices and scaffolds have been designed and studied, and in some cases even patents have been obtained, but not many have entered the market. More progress is expected in these two areas. The limited commercial products that use hydrogels in drug delivery and tissue engineering are to some extent related to their high production costs.
Related Articles: Hydrogels: History & Application in Drug Delivery