Vaccines based on messenger RNA (mRNA) have attracted worldwide attention as Pfizer and Moderna vaccines have been authorized for emergency use by the U.S. Food and Drug Administration (FDA) and similar agencies around the world. This is the first time an mRNA-based vaccine has been approved for use in healthy people, marking an important milestone in the achievements of science and public health.

The History of mRNA Vaccine

In 1944, Oswald Avery and his colleagues from the Rockefeller Institute proposed that deoxyribonucleic acid (DNA) is the material basis of heredity. In 1953, James Watson and Francis Crick codiscovered the double-helix structure of DNA, which formed the basis for modern biotechnology. Since then, the study of heredity has deepened to the molecular level.In 1961, in a laboratory at the California Institute of Technology, scientists successfully extracted mRNA for the first time. After that, its function and biological behavior were fully studied. The scientific community has discovered that there is a "middleman" between DNA and protein, responsible for transmitting information, and mRNA is this "middleman".

Messenger RNAs, also known as mRNA, are transcribed from a strand of DNA as a template. They are a type of single-stranded RNA that carries genetic information and can guide protein synthesis. Generally speaking, mRNA replicates the genetic information of a strand of double-stranded DNA in the nucleus, and then leaves the nucleus to produce proteins in the cytoplasm. In the cytoplasm, the ribosome moves along the mRNA, reads its base sequence, and translates it into its corresponding amino acid, eventually forming a protein.

In 1990, Dr. Wolff at the University of Wisconsin first reported that intramuscular injection of mRNA into mouse skeletal muscle can express the corresponding protein and produce an immune response. This reveals the possibility of mRNA technology for vaccine research. Two years later, another researcher injected hormone-encoding mRNA directly into the brain of mice, and found that it had the effect of alleviating diabetes insipidus, indicating that mRNA has the potential to become a therapeutic drug. Although the initial report was promising, it did not attract much attention from the pharmaceutical industry, mainly because of concerns associated with the triggering of unwanted innate immune response, and the instability of the mRNA product. After 15 years of hard work, in 2005, Ph.D. Kariko and Weissman discovered an effective way to evade the innate immune response by modifying mRNA nucleosides. This major breakthrough has completely changed the pharmaceutical potential of mRNA therapy and has led to a large investment in related research, leading to important discoveries in mRNA modification and purification to reduce innate immune responses and improve mRNA stability.

The principle of the mRNA vaccine is to introduce the mRNA encoding disease-specific antigens into the body, and use the protein synthesis mechanism of the host cell to generate the antigens, thereby triggering the immune response and achieving the effect of disease prevention. If the human body is compared to a machine, then millions of tiny proteins are the parts that keep the machine running, and mRNA is the commander-in-chief of making parts.

That is to say, after the mRNA sequence is injected into the human body, the process of protein synthesis in vitro is skipped, and the pathogen immune epitope protein is directly produced in human cells. The immune system conducted pre-war exercises to induce recognition of viral proteins, thereby generating immune memories of specific pathogens. When the real pathogen enters the human body, the immune cells are like a well-trained soldier, quickly identifying the pathogen and launching a precise attack on it.

Firstly, vaccines based on mRNA can be quickly developed. They can be developed within days or months based on the sequencing information from the target virus, while traditional vaccines usually take years and require a deep understanding of the target virus to make the vaccine effective and safe.

Secondly, these new vaccines can be rapidly produced. Due to the high yield of in vitro transcription reaction, mRNA production can be fast, cheap and scalable.

Thirdly, vaccine risks are low. The mRNA does not contain infectious viral elements that pose a risk to infection and insertional mutagenesis.

Although mRNA vaccines have so many advantages in theory, why didn't any mRNA vaccines come out until the outbreak of the novel coronavirus epidemic?

mRNA has a large molecular weight, strong hydrophilicity, and its biological activity is thousands of times that of small-molecule drugs, so it is easier to produce. However, its single-chain structure makes it extremely unstable and easily degraded. And it carries a negative charge, so it is difficult to deliver it across the cell membrane, which is also negatively charged on the surface.

Thus, intracellular delivery is essential to facilitate cellular uptake of mRNA and to protect it from degradation.

Currently commonly used delivery technologies include electroporation, protamine, cationic nanoemulsion, cationic polymer liposome, and so on. Electroporation is a transfection in which mRNA molecules pass through a membrane gap formed by high-voltage pulses and directly enter human cells. The other methods are to protect mRNA molecules from extracellular degradation, or to promote the fusion of mRNA molecules with cell membranes to improve transfection.

With the approval of two mRNA vaccines for the novel coronavirus,  lipid nanoparticles (LNPs) is undoubtedly the most popular delivery technology. 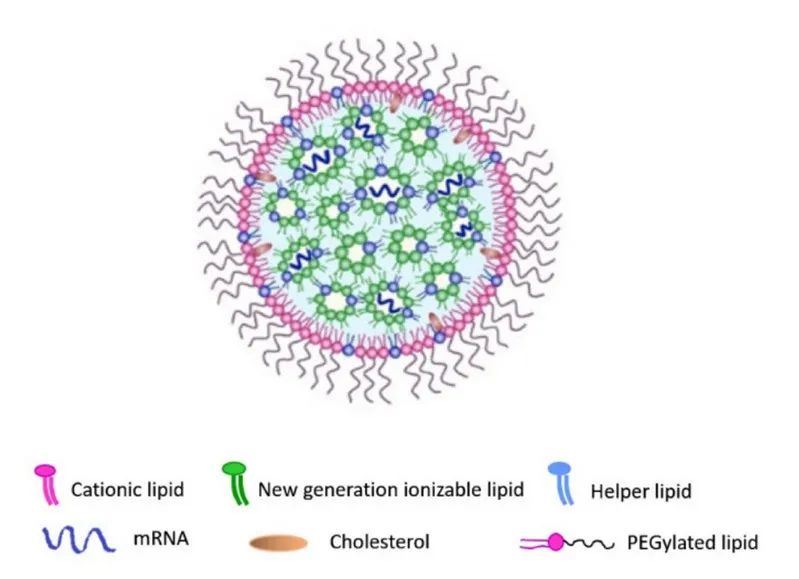 A breakthrough of LNP technology is the use of ionizable lipids. Its polarity can change with changes in pH. In a low pH environment, it carries a positive charge, which allows them to form a complex with mRNA to stabilize the mRNA. However, at physiological pH, it is neutral, which reduces its side effects.

On the periphery of the LNP, there are also PEGylated lipids that are modified by polyethylene glycol, which is used for reducing particle sizes, preventing particle aggregation, increasing circulation time, and reducing uptake by untargeted cells.

In addition, LNP also contains cholesterol and phospholipids to help form the complete structure of LNP.

When LNP touches the cell membrane, it will be swallowed by the cell to form endosome vesicles. Inside the cell, the pH of the endosome will decrease, causing the ionizable lipid molecules to carry a positive charge, which will change the conformation of LNP and promote the release of mRNA from the endosome. Then they can bind to the ribosomes responsible for protein production and direct the synthesis of viral proteins.

The COVID-19 mRNA vaccines are indeed a milestone success for gene therapy and prophylaxis, opening opportunities for a wide range of medical and clinical applications. They can be expected to contribute enormously to both public health and curing a range of severe diseases, including cancers and genetic disorders.

Biochempeg can produce and provide the following PEG products that can use in COVID-19 vaccines.