Antibody-drug conjugate (ADC) has ushered in a bright moment of development in the past two years and has received a lot of attention. In particular, Gilead did not hesitate to acquire Immunomedics for US$21 billion in all cash to obtain ADC drugs targeting Trop-2, making ADC a hot topic of the year. On the contrary, small molecule-drug conjugates (SMDC), which are very similar to ADC drugs, are still advancing in a stumble, and have not yet made breakthrough progress.

Compared with ADCs, small molecule-drug conjugates (SMDCs) provide a new, less established perspective for targeted delivery. Generally speaking, SMDC and ADC, and even PROTAC have similar compositions, which are composed of targeted ligands, linkers, and drug payload (cytotoxicity, E3 ligase). The biggest difference between SMDC and ADC is the targeted ligands. ADC uses biological antibodies as drug targeting, while SMDC uses small molecule targeting. In the preparation of ADC, the ratio of payload to the antibody is usually uncertain. The use of site-specific coupling technology can achieve a relatively accurate drug-to-antibody ratio (DAR), while SMDC’s small molecule targeting ligands and payloads usually have accurate values. 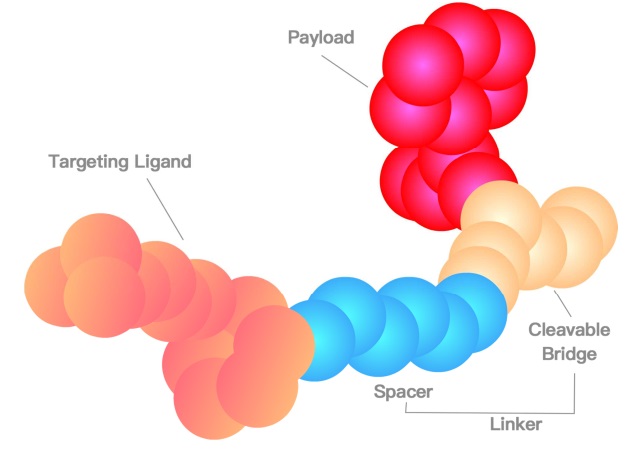 Nevertheless, SMDC has its own advantages. 1) Lower cost. SMDC drugs are composed of small molecules, which are easy to control the synthesis process and cost. Compared with antibody drugs, the industrial operation is simple; 2) A non-immunogenic nature. Security control is easier to implement. 3) Lower molecular weights, which confer a high potential for good cell penetration and better in vitro and in vivo stability in solid tumors. However, it is precisely because SMDC is similar in molecular structure to PROTAC, it also faces the difficult problem of oral preparations. Therefore, similar to ADCs, almost all SMDCs are likely to be administered by injection, causing inconvenience in clinical use.

The targeting ligand plays the role that the antibody plays in ADCs. SMDC design needs to consider binding affinity, target selectivity and the size of the conjugates. The increased binding affinity of the targeting ligand reasonably reduces the drug dosage required to achieve high-efficiency therapy. Selectivity or specificity is very important in the design of drug conjugates, because the original purpose of SMDC and ADC is to reduce the toxicity of the payload to normal cells.

The size of the ligands of SMDC cannot be ignored, because the targeting ligands and the linker are adjusted to make conjugates with the desired pharmacokinetics. Size will generally influence drug delivery into solid tumors via different mechanisms, including permeability, retention effects and excretion through the kidneys. Low molecular weight therapeutic drugs are easier to release and allow them to independently diffuse into the tumor. At the same time, low molecular weight SMDC is also easy to be metabolized, because off-target drugs can usually be excreted from the body in time, thereby reducing the adverse toxicity in normal cells.

The selection of ligands for SMDC is not as straightforward as ADC antibodies, and it is more difficult to screen suitable ligands. Therefore, the diversity of SMDC drug targets is not very rich. There are many researches on SMDC drugs targeting folate receptors. Others include prostate-specific membrane antigen (PSMA), glucose transporter 1 (GLUT1), aminopeptidase N (APN), and low-density lipoprotein receptor-related protein 1 (LRP1). ), avb3, bomblesin receptor and somatostatin receptor (SSTR) also have related SMDC clinical trials or preclinical literature. 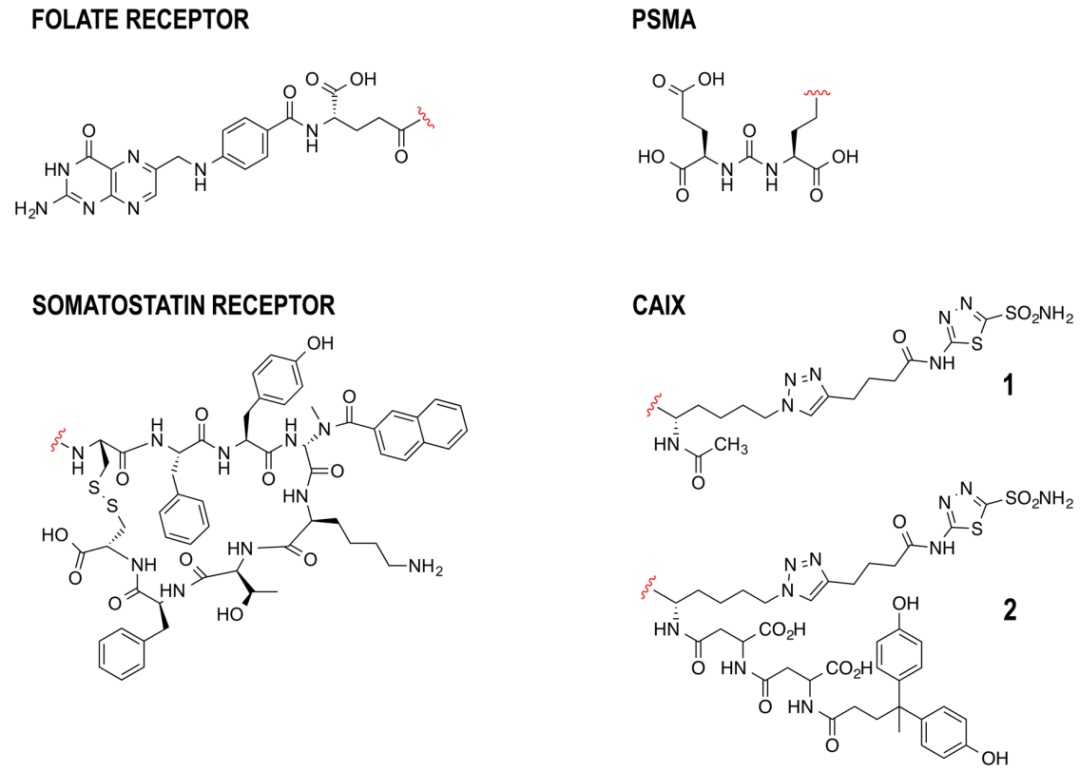 Spacer is usually used as a connection between a targeting ligand and a cleavable bridge, and is very important for SMDC to maintain receptor binding. Inappropriate spacers can lead to unnecessary reductions in the binding affinity of intramolecular associations. In addition, another function of spacer is to improve the hydrophilicity of SMDC. Targeting ligands and therapeutic payloads are usually hydrophobic to maximize membrane permeability and receptor affinity. The use of water-soluble spacers, such as polysaccharides, hydrophilic amino acids, PEG, and peptidoglycans, give SMDC improved hydrophilic potential. At the same time, the spacer design also helps to reduce the cytotoxicity of the payload, because the penetration of polar conjugates through cell membranes is more difficult without receptor-based endocytosis. However, the characteristics of spacers are not yet clear. In some cases, rigid structures are better than flexible structures.

Biochempeg, as a professional PEG supplier, is dedicated to being your most reliable partner to provide chemical synthesis and high-quality PEG linkers. We are committed to promoting the progress of your ADC & SMDC discovery and development projects.

Efficient SMDC activity depends on the ability of the cleavable bridge to release the parent drug from the SMDC at the predicted cleavage site and reliable rate after penetrating the target cell. Therefore, consistent with ADC drugs, SMDC drugs also require drug stability during circulation in the body. Two types of triggering methods are used in SMDC: ①The use of disulfide bond-based linkers is one of the most successful methods; ②Based on the differences in the pH environment in the body, design a cleavage bridge that is sensitive to the pH of the target cell. For instance, acetals and hydrazones can be hydrolyzed in the acidic environments found in endosomes.

Small molecule payloads or active drugs are also the core part of SMDC, and multiple aspects need to be considered for the selection of payloads. First, the release rate of the payload; secondly, the cell activity and intracellular stability of the payload, such as choosing low-mole or sub-molar payload; third, the high binding affinity and the potential to resist efflux. In general, you can refer to the following standards. 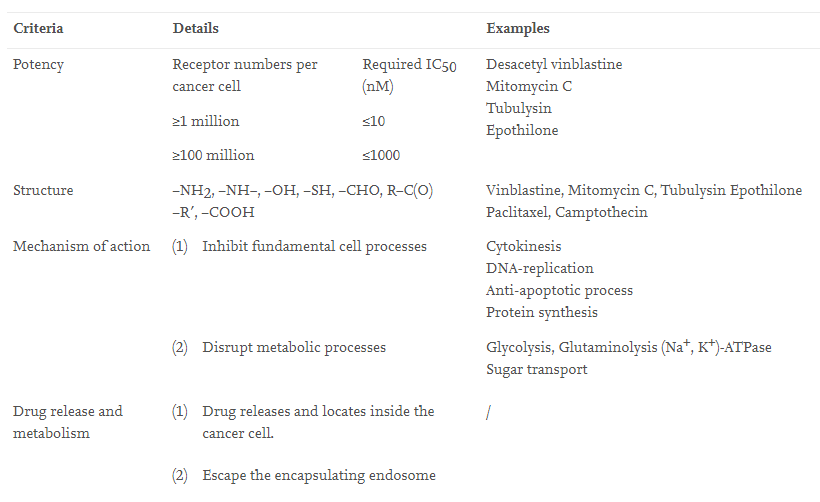 In the mechanism of action, SMDC and ADC drugs are also very similar. Take SMDC drugs targeting folate receptors as an example. SMDC drugs cannot enter cells through reduced folic acid carrier channels like normal cells absorb folic acid. Instead, it binds to the high-affinity folate receptor, enters the cell in the form of endocytosis, and then lyses to release cytotoxic molecules to play a killing effect, and the folate receptor circulates to the cell surface again.

The development of SMDC drugs has also experienced the darkest moments of clinical failure and drug delisting. Multinational pharmaceutical companies such as Merck, Novartis, and Bayer failed to lead SMDC drugs to glory. The pipeline layout of SMDC drugs is also very cool compared to ADC. Perhaps only after a historic breakthrough can the industry's interest be stimulated again.

At present, there are few active products in the SMDC drug pipeline. There are only a limited number of targeting ligands that have been assessed systemically. , mainly focusing on folate receptors.

Among the enterprises in the layout, Endocyte products are the most, but they are mainly aimed at folate receptors (FR), including Vintafolide developed in cooperation with Merck. After the product failed in Phase III clinical trials in 2014, the conditional approval was revoked and the product was delisted. Follow-up products are still focused on folate receptors. According to published data, the best effectiveness data is PR (1 case, 3.8%).