Antibody-Drug Conjugates (ADCs) have been proposed for more than four decades, and numerous scientists have continued to optimize antibodies, cytotoxic payloads, linkers, clinical assays, and clinical trial protocols, ushering in a bumper crop in the last two years with the FDA approval of several ADC drugs. 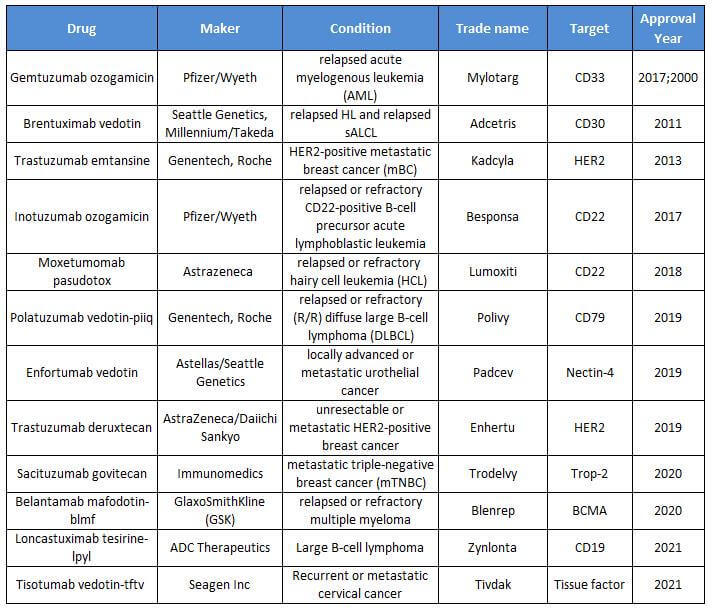 The targets of approved and pipeline ADC drugs are mainly classical targets, such as HER2 and BCMA. However, new targets have been emerging in recent years.

Eisai acquired the FRα monoclonal antibody Farletuzumab through the acquisition of Morphotek. However, Phase 3 clinical data published in 2016 for Farletuzumab in patients with platinum-resistant ovarian cancer showed that it did not meet the primary design endpoint of PFS. subsequently, Eisai developed the ADC drug MORAb-202 (farletuzumab and eribulin conjugated) with favorable preclinical data and two clinical studies underway (NCT04300556, NCT03386942). On June 17, BMS made a $650 million down payment to enter into a co-development agreement with Eisai.

Mirvetuximab soravtansine (IMGN853) was developed by ImmunoGen with the cytotoxic drug DM4 linked to a humanized anti-FRα monoclonal antibody by a cleavable linker.It was granted orphan drug designation for the treatment of ovarian cancer in the EU in April 2015 and in the US in August 2014. in June 2018, the US FDA granted Fast Track designation to this ADC drug.

The Phase 3 clinical FORWARD I study of mirvetuximab soravtansine (NCT02631876) showed that the primary endpoint was not met, but efficacy was demonstrated. After consultation with the FDA, ImmunoGen initiated two new Phase 3 clinical studies, the SORAYA study (NCT04296890); and the MIRASOL study (NCT04209855), focused on platinum-resistant, high FRα-expressing ovarian cancer patients, with results expected in late 2021 or 2022. 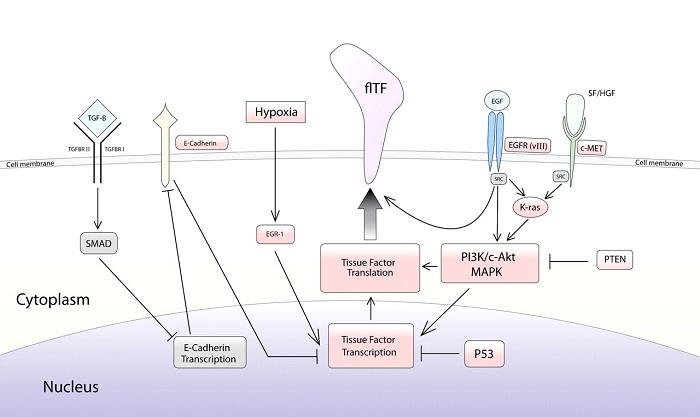 Tisotumab vedotin, also known as TIVDAK, jointly developed by Seagen and Genmab, is an  ADC targeted to Tissue Factor (TF). It includes an antibody targeting Tissue Factor (TF) conjugated with monomethyl auristatin E (MMAE) via a cleavable maleimidocaproyl-valyl-citrullinyl-p-aminobenzyloxycarbonyl (mc-val-cit-PABC) type linker. On September 20, 2021, it is approved by FDA for the treatment of adult patients with recurrent or metastatic cervical cancer with disease progression on or after chemotherapy.

LIV-1 is a transmembrane protein with zinc transporter and metalloproteinase activity. Their expression in tissues is heterogeneous, reflecting their different functions. Among them, the LIV1 (ZIP6) protein is mainly expressed in hormone-controlled tissues and its expression is sensitive to estrogen levels. It was first identified as an estrogen-inducible gene in breast cancer cell lines and subsequently found to be associated with HR-positive breast cancers. In addition to breast cancer, it has also been detected in pancreatic, prostate, melanoma, cervical and uterine cancers.

Ladiratuzumab vedotin (SGN-LIV1A), developed by Seagen, is a humanized antibody conjugated through a proteolytically cleavable linker to MMAE to Zinc transporter LIV-1 (SLC39A6).

A phase 1 clinical trial in breast cancer (NCT01969643) has been conducted with a planned enrollment of 508 patients. Early results were observed in 69 metastatic breast cancers with overall good treatment performance and a toxicity profile similar to other MMAE-based ADCs. Major adverse effects included fatigue (59%), nausea (51%), peripheral neuropathy (44%), alopecia (36%), decreased appetite (33%), constipation (30%), abdominal pain (25%), diarrhea (25%), and neutropenia (25%). Neutropenia (25%) and anemia (15%) were ≥ grade 3. Preliminary antitumor activity was observed in both the HR+/HER2- (DCR 59%) and TNBC (DCR 64%) subgroups. Notably, the LIV1 expression rate was 91% in 631 tumor samples, with moderate to high expression in 75% of cases.

SGN-LIV1A can also induce immunogenic cell death (ICD), which may increase the effectiveness of immunotherapy. A Phase 1/2 clinical trial (NCT03310957) is underway in combination with Pembrolizumab for the treatment of advanced breast cancer or metastatic triple negative breast cancer.

Carcinoembryonic antigen-related cell adhesion molecules (CEACAMs) are a family of 12 immunoglobulin-associated proteins that are physiologically expressed on the cell membranes of many epithelial tissues and they act as regulators of different processes such as cell adhesion, differentiation, proliferation and survival.

There is a close relationship between CEACAMs and cancer, and CEA (CEACAM5) was found to be a tumor biomarker, in addition to being involved in the signaling regulation of cancer progression and metastasis. Drugs targeting CEACAM1, CEACACAM5 or CEACAM6 are already in development. In particular, CEACAM5 is highly expressed in several tumors, including CRC, lung and gastric tumors, and has become a major target for ADC drug development.

SAR408701 is a novel ADC developed by Sanofi, which consists of an anti-CEACAM5 antibody (SAR408377) coupled to DM4, a maytansinoid agent.

Labetuzumab govitecan (IMMU-130), developed by GileadSciences, is consisting of Labetuzumab (CEACACAM5 antibody) coupled to SN-38. Due to unsatisfactory preclinical results, there are now no clinical studies underway.

ADC drugs have gained rapid development in the past two years. In addition to classical targets such as HER2, new targets such as folate receptor, tissue factor, LIV-1 and CEACAM have also made positive progress. Both folate receptor and tissue factor have drugs in clinical phase III, and Tisotumab vedotin has already submitted BLA, and it is believed that there will be new drugs in ADC field in the next two years. In addition to the above targets, ADCs for targets such as HER3, Mesothelin, and c-Met are also starting to enter clinical phase 1/2.

Biochempeg is dedicated to being your most reliable partner to provide chemical synthesis and high-quality PEG linkers. We are committed to promoting the progress of your ADC discovery and development projects.