Advances In Long-Acting Technology For Protein And Peptide Drugs

Since the first biologically active peptide was synthesized by Robert Bruce Merrifield in 1953, the research of peptide drugs has been developing rapidly. The druggability property of peptide drugs is higher than that of general chemical drugs, with high biological activity, strong specificity, relatively weak toxic reaction, less accumulation in the body, less interaction with other drugs, better affinity with receptors in the body, which is a very promising biological macromolecule in drug development. In view of this, many pharmaceutical companies have increased the research and development of peptide drugs, especially in the field of tumor and diabetes treatment, several peptide drugs have been marketed and have achieved great economic benefits. However, most of these drugs suffer from poor stability, small dose of administration, short half-life in vivo, low bioavailability, etc. Especially, protein and peptide drugs for chronic diseases often require long-term and frequent injections, which not only have low compliance but also may lead to other adverse reactions. For example, the use of bevacizumab for the treatment of age-related macular degeneration requires frequent intravitreal injections, which can easily induce complications such as cataract, retinal hemorrhage and detachment. 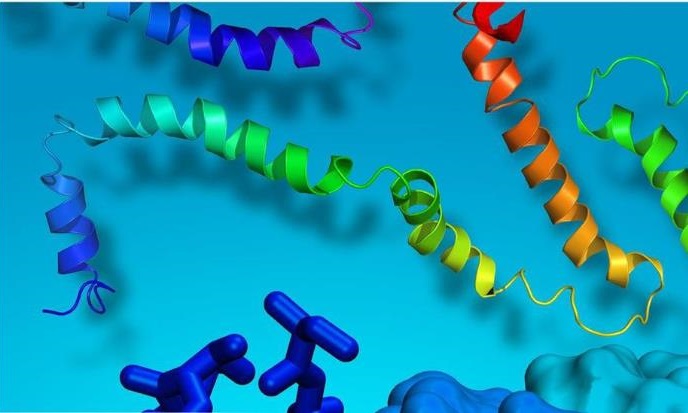 Molecular modification of protein and peptide drug can be performed to improve their stability, extend their in vivo half-life and make them long-acting. Strategies such as amino acid substitution or cyclization, PEGylation, fusion of long-acting fragments (fusion with Fc, fusion with human serum albumin), and conjugation of fatty acid chains are commonly used, and several drugs have been successfully marketed.

Linear peptides are therapeutically limited by factors such as poor metabolic and conformational stability, which may impair their biological activity and affect half-life, whereas cyclic peptides can overcome these challenges because they are more resistant to metabolic degradation and can be designed into the desired conformation. Cyclization is an effective way to extend the plasma half-life of peptides by giving them a stable and rigid structure. Cyclization can eliminate the charged ends of peptide chains, prevent enzymatic degradation of amino acids, improve metabolic stability, membrane permeability and even increase oral bioavailability of drugs. Octreotide is a synthetic analog of the cyclic octamer of natural growth inhibitor, which retains the key Phe-Trp-LysThr part of growth inhibitor (containing tryptophan residues) and has similar pharmacological effects as growth inhibitor, but with longer duration of action and extended elimination half-life in vivo.

Chemical modification is a common technique for the long-lasting potency of protein and peptide drugs. Common methods of modification include N-acetylation and C-amidation, and chemical modification of amino and/or carboxyl terminals in the amino acid chain can enhance the stability of sensitive protein and peptide drug to protein hydrolases. For example, BAX 855 [PEG-recombinant coagulation factor VIII (rFVIII), rFVIII is modified with polyethylene glycol (PEG) to reduce the frequency of injections while retaining the efficacy of the FVIII molecule. Modification of the N-terminal amino group of the original drug is now widely used as a commercial long-acting technology for protein and peptide drugs, such as PEGylated granulocyte colony-stimulating factor (PEG G-CSF) and PEGylated interleukin-10 (PEG-IL-10), for which U.S. patents were applied for as early as 2006, and several PEGylated drugs have been approved for marketing.

4. Fusion with other proteins by genetic means

Gene fusion expression of fusion proteins with protein and peptide drugcan increase the relative molecular mass of drugs and decrease the renal clearance in vivo, which can achieve the purpose of prolonging the half-life of drugs in vivo. FcIII is a 13-mer IgGFc structural domain binding peptide (IgGBP) that increases the in vivo half-life of proteins by binding serum IgG through fusion proteins. The half-life is increased by 75 times compared to the unfused modified protein.

Exenatide is widely used for the treatment of type 2 diabetes, and the fusion peptide obtained by combining exenatide with human serum albumin (HSA) shows the similar insulinotropic activity as natural exenatide. Pharmacokinetic analysis of exenatide HSA after subcutaneous administration showed a 4-fold increase in plasma half-life compared to exenatide. In addition, exenatide-HSA showed significantly improved anti-hyperglycemic and enhanced hypoglycemic effects in an oral glucose tolerance test. Improving the stability of protein and peptide drug by gene fusion technology is a good way to enhance the long-lasting effects of protein and peptide drugs at present.

Glycosylation usually occurs in macromolecules such as nucleic acids, proteins and lipids and plays an important role in biological processes such as inflammation, immune response and intracellular transport. Many therapeutic protein and peptide drugs can have improved pharmacokinetic and pharmacodynamic properties when glycosylated in vitro, and in addition, glycan modifications using enzymatic or chemical conjugation methods can facilitate protein targeting to disease-affected tissues. It was found that N-glycosylation modification of the flexible N-terminal region of recombinant alpha-1 antitrypsin (rA1AT) increased the circulating half-life of rA1AT while not altering its protease inhibitory activity. The specific vasoactive intestinal polypeptide receptor 2 agonist (BAY55-9837), a potential protein therapeutic agent for type 2 diabetes, was less stable and had a shorter in vivo half-life, whereas the BAY-CS-SeNPs obtained by combining it with chitosan-modified selenium nanoparticles (CS-SeNP) had good stability, with a release process lasting more than 70 h and a cumulative release of 78.9%.

Stapled peptide is a new structural peptide that has emerged in recent years and has attracted the attention of researchers because of its extremely stable structure. Stapled peptide is a peptide "stapled" into α-helical shape to obtain optimized cross-linked chemical structure, which gives resistance to proteolytic degradation and enhances its half-life through cross-linked "binding". Stapled peptides represent a promising new approach to modulate intracellular protein-protein or protein-DNA interactions and offer the opportunity to target intracellular targets. The hydrocarbon stapled peptide was designed based on the BIM BH3 helix model, which broadly targets Bcl-2 family proteins to trigger pro-apoptotic activity. It has been demonstrated that hydrocarbon-spiked α-helical peptides have emerged as a new class of peptide therapeutics with stable conformations that enhance the in vivo bioavailability of drugs.

Midasol Therapeutics has developed a transoral delivery system using insulin glycosylated nanoparticles, and ActoGeniX has developed the TopAct technology platform to replace the injectable route of drug delivery with oral administration. Researchers have developed various drug delivery systems aimed at controlling drug release and improving drug stability through carriers, in addition to improving the solubility and targeting of insoluble drugs. In conclusion, the long-acting of protein and peptide drugs has important clinical significance and broad market prospects.