mRNA vaccines are a new class of nucleic acid vaccines that do not enter a cell's nucleus that houses your DNA genome. There is zero risk of these vaccines integrating into our own genome or altering our genetic makeup. However, mRNA has the disadvantage of being susceptible to degradation by nucleases. Therefore, it is important to select a suitable delivery carrier for mRNA vaccines. Lipid nanoparticles (LNPs) play a key role in effectively protecting and transporting mRNA to cells. With their ability to encapsulate and deliver therapeutics to specific locations within the body and to release their contents at the desired time, LNPs provide a valuable platform for the treatment of a variety of diseases.

Liposomes are closed lipid bilayer vesicles that form spontaneously in water (see Figure 1A) - essentially a lipid vesicle. Upon the discovery of liposomes in the 1960s, scientists almost immediately recognized their potential as an effective drug delivery system. Over the past several decades, scientists have been conducting research on various aspects of liposomes, including controlling their site of action, the duration of their circulation in the body, and the timing and site of release of the drugs they deliver. 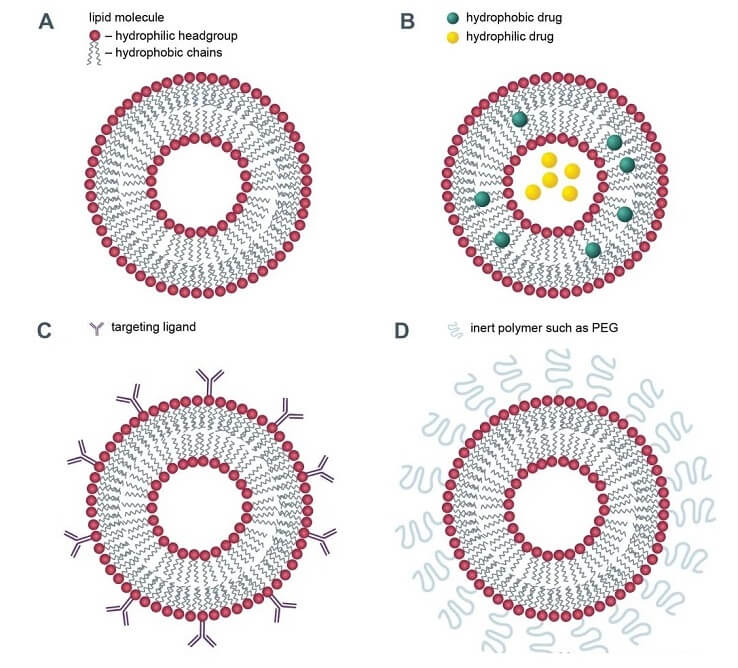 Although liposomes possess many advantages, they also have some disadvantages. They have a short circulation time in the blood, are unstable in the body, and lack target selectivity. To overcome these challenges, scientists have done some important efforts.

1. To enhance tissue targeting, scientists have used ligands or antibodies to modify the surface of liposomes so that the liposomes can recognize and bind to specific receptors on cells (Figure 1C). The modified liposomes are called immunoliposomes.

2. To extend the lifetime of liposomes in the blood, scientists have coated the surface of liposomes with biocompatible inert polymers, such as PEG (Figure 1D).

3. To achieve controlled release of the encapsulated drug, scientists designed stimulus-responsive liposomes that are sensitive to temperature and pH. The permeability of the membranes was enhanced with the phase transition of stimuli-responsive liposomes.

Compared to conventional liposomes, lipid nanoparticles have a more complex internal lipid structure and a much lower water content in the inner core. The development of solid lipid nanoparticles (SLN) and nanolipid carriers (NLC) has further enhanced the physical stability of liposomes and addressed a major limitation of emulsified formulations. Cubic liposomes are a recent technology that form highly stable nanoparticles from lipids in the cubic phase, whose stability is facilitated by the polymer on the surface.

Liposomes have been recognized as a powerful tool in medicine for over 50 years. Their ability to encapsulate and deliver therapeutics controllably to specific locations within the body makes them useful for treating a variety of diseases. 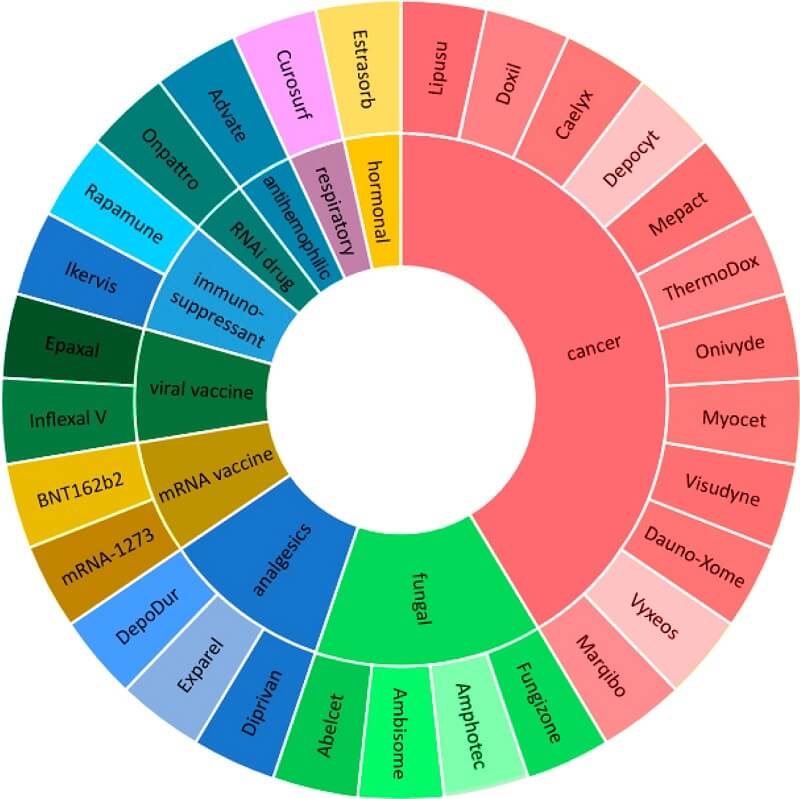 LNPs in the COVID-19 mRNA Vaccines

The latest successful use of LNP is as a delivery vehicle for two approved COVID-19 messenger RNA (mRNA) vaccines from Pfizer / BioNTech and Moderna. They have been developed at an unparalleled speed and have shown remarkable effects in disease prevention. The vaccines deliver the mRNA encoding the SARS-CoV-2 spike protein into the cytoplasm of the host cells; the mRNA is translated into the spike protein, which acts as an antigen and leads to the development of an immune response to the virus.

LNP consists of: ionizable cationic lipids, cholesterol, helper lipid, PEG-lipid, and negatively charged mRNA.
Biochempeg is a dynamic science company dedicated to PEG derivatives. We are capable of supplying small to large quantities of a rich selection of PEG derivatives with GMP & non-GMP standards. We can produce and provide mPEG-N,N-Ditetradecylacetamide (ALC-0159), mPEG-DMG, mPEG-DSPE and more used in COVID-19 vaccines.

The polarity of ionizable cationic phospholipids varies with pH and is ionizable at low pH (≤5.0) and does not ionize under physiological conditions (pH=7.4). Under acidic conditions, the electrostatic action of the substance pulls the material together. Through a specific preparation process, mRNA is wrapped in the LNP system by electrostatic complexation to form a complex. mRNA/LNP is engulfed into the cell to form vesicles when the positively charged cationic lipids fuse with the negatively charged cell membrane upon contact with the cell membrane. Upon entry into the cell, the internal pH of the cell decreases to form an acidic environment as the exogenous macromolecules are broken down. This leads to a change in the conformation of the ionizable lipid and the LNP structure receives disruption, resulting in the release of mRNA, which binds to ribosomes and translates viral proteins, i.e., antigens, thereby activating the immune response in vivo. 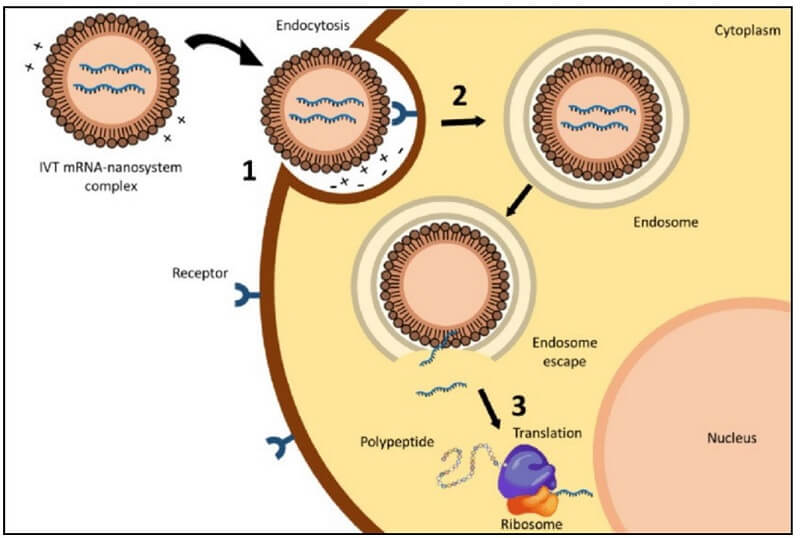 A number of LNP drug formulations have been approved and used in medical practice.

The largest single application of LNPs for drug delivery is in cancer therapy, as LNP-encapsulated antitumor drugs have better bioavailability and selectivity than free drugs. Lipid-based nanocarriers reduce the toxicity of anticancer drugs to normal tissues, increase the water solubility of hydrophobic drugs, prolong the residence time of drugs, and improve control of drug release.

LNPs also improve the efficacy of cancer therapy through enhanced permeability and retention (EPR) effects. Rapid but defective angiogenesis in tumors results in vessels possessing large fenestrations (>100 nm in size) through which LNPs can easily pass. As a result, tumor vessels are much more permeable to LNP, allowing them to accumulate selectively in the tumor when injected intravenously. In addition, dysfunctional lymphatic drainage in the tumor reduces the rate at which LNPs leave the tumor, thereby increasing their retention. Due to the EPR effect, the accumulation of LNPs in tumors allows nanoparticles to selectively release antitumor drugs in the vicinity of tumor cells.

Doxil was the first approved anti-cancer nano-formulation and the first approved liposomal drug. The formulation was designed to improve the pharmacokinetics and biodistribution of the anthracycline doxorubicin, a potent anticancer drug with cardiotoxicity. Doxil takes advantage of EPR by using sterically stable nanoparticles (∼100 nm) to extend the circulation time in human plasma while reducing the cardiotoxicity of doxorubicin. It was developed for intravenous administration for the treatment of advanced ovarian cancer, multiple myeloma, and HIV-associated Kaposi's sarcoma. The LNPs used for Doxil is composed of hydrogenated soy phosphatidylcholine, cholesterol, and DSPE-PEG2000.

The second major class of liposomal drugs includes fungicides. Amphotericin B is a broad-spectrum polyene antibiotic that has been in medical use for decades and is considered the gold standard for the treatment of invasive fungal infections. Although amphotericin B has high antifungal activity, it also has serious side effects, particularly nephrotoxicity. It is amphoteric, characterized by complex self-association behavior, and different types of aggregates show different solubility and toxicity; the aggregation state is also correlated with the efficacy. Therefore, controlling the aggregation state of a drug can improve its therapeutic efficacy and reduce its toxicity. Such aggregation control has been achieved by lipid-based nanoformulations. Several lipid-based nanoformulations of amphotericin B have been developed, which exhibit good pharmacokinetic profiles and greatly reduce the side effects of this drug.

The development of ophthalmic formulations capable of delivering hydrophilic and hydrophobic drugs to the internal structures of the eye and restoring the tear film in front of the eye has been a frontier topic of discussion in recent years. The preparation of ophthalmic drugs as liposomes has the advantages of increased corneal permeability, slow-release and reduced toxic reactions.

In addition to these disease treatment areas, liposomes can also be used for the treatment of otitis media, asthma, thrombosis and many other diseases.

Related Articles
Overview of mRNA-Lipid Nanoparticle COVID-19 Vaccines
Liposomes vs. Lipid Nanoparticles: Which Is Best for Drug Delivery?
Current Nanomedicines for the Treatment of Cancer​
Nano Drugs: Let The Blood-Brain Barrier No Longer Be A "Barrier"