Peptides and proteins are interesting drug candidates due to their important role in many different disease pathologies. However, the clinical potential of these biomolecules is often hampered by their inherent short serum half-life. A number of long-acting technologies can extend the half-life of protein and peptide drugs and significantly improve patient compliance, while also optimizing the physicochemical properties of drugs and enhancing their safety and efficacy. Currently, commonly used long-acting technology pathways include fusion protein technology, PEGylation technology, constructing mutants and micro-encapsulation. The main technical principles as follows.

★ Protect the restriction site and improve the stability of protein/peptide;
★ Increase molecular weight and reduce renal clearance rate;
★ Change the solubility, the solubility of soluble protein will decrease, which is conducive to slow-release;
★ Change the drug dosage form to extend the release rate of the drug;.

The fusion-protein approach is used to prevent fast renal clearance by connecting a target protein to a protein with a longer half-life.  Common fusion protein technologies include Fc fusion, HSA fusion, CTP fusion and XTEN fusion, while other methods include TF fusion and ELP fusion. Currently, Fc fusion, HSA fusion and CTP fusion have related drugs approved for marketing, while other fusion methods are still in the clinical verification stage.

The strategy of Fc fusion provides the therapeutic protein a longer half-life by combining them with the Fc domain of an immunoglobulin G (IgG). To date, more than ten products, based on Fc fusion proteins, have been approved by the FDA. The added Fc-domain can further prolong the circulation time via interaction with the neonatal Fc receptor (FcRn) in a pH-mediated recycling procedure. At the same time, the Fc domain can be used to mediate various biological functions such as ADCC and CDC. However, this type of fusion protein does not have the variable region of an antibody, and its pharmacology and efficacy still mainly depend on the functional molecule fused with Fc. 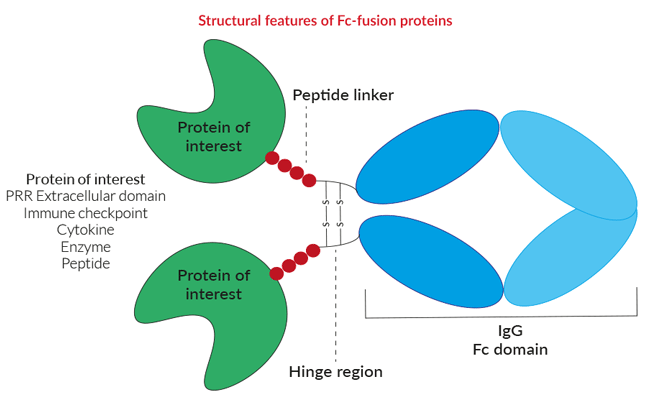 Human serum albumin (HSA) has the characteristics of biocompatibility and long circulation, with a half-life around 19–22 days. Like IgGs, HSA also binds FcRn in a pH-dependent manner, albeit at a site different from—and via a mechanism distinct from, resulting in its extended half-life. HSA also tends to accumulate in tumors and in inflamed tissues, which suggests that fusion or binding to albumin may potentially help to target proteins or peptides to those sites.

TF is a single-chain glycoprotein synthesized by the liver, containing 4 negatively charged sialic acid groups, with a biological half-life of 8 days. It is the main iron-containing protein in plasma and directly participates in iron metabolism in the body. TF can partially resist the degradation of trypsin and chymotrypsin, and has good stability in the gastrointestinal tract. TF-mediated endocytosis is one of the most characteristic transport processes of biological cells, and it is mainly used to explore the oral dosage forms of some protein and peptide drugs.

The CTP approach, which was developed by researchers working at Washington University in St. Louis, Missouri, attaches a small portion of the female pregnancy maintenance hormone chorionic gonadotropin (hCG) to the molecule under development, markedly improving its circulatory half-life. The three main important properties of a technology to extend protein longevity are: Create a durable protein; that maintains  comparable biological activity; and is non-immunogenic. The CTP offers all three in a small peptide that can be attached once or multiple times to a protein of choice to extend durability. One significant limitation of this technology is that the recombinant CTP fusion must be produced in Chinese hamster ovary (CHO) or other mammalian cell systems, so that the resultant recombinant proteins are O-glycosylated in the CTP extension module

XTEN is a class of non-structured, biodegradable, non-immunogenic polypeptides, lacking secondary structure, with high solubility and low aggregation tendency. XTEN has a large hydrodynamic volume and is negatively charged. Fusing peptide or protein drugs with XTEN through genetic engineering methods can enhance the stability and solubility of the drugs. Since XTEN has a significant negative charge, it will reduce its receptor affinity and reduce receptor-mediated clearance of protein drugs; and the glomerular basement membrane repels negative charges, which can further extend the plasma half-life. However, this will also affect the tissue distribution of the fusion protein, reducing its affinity with the target receptor on the cell surface and thereby reducing its biological activity.

Elastin-like peptides (ELPs) are derivatives of tropoelastin with a unique property that allows them to stay soluble below a certain critical temperature but reversibly form aggregates above that temperature. Since they are derived from tropoelastin, ELPs are biocompatible, non-toxic, and non-immunogenic. The unique properties of ELPs have made them a desirable class of fusion tags used in several biomedical applications including targeted drug delivery and enhancing the half-life of protein drugs. The most significant property of an ELP is that when fused to other proteins, the phase transition property of the ELP is maintained, and the target protein can be purified using the thermally driven property of the ELP.

Polyethylene glycol (PEG), a neutral polyether polymer, has become an indispensable part of drug delivery systems (DDS). By connecting PEG derivatives to related drugs, the molecular weight of the drug can be increased, so that it is not easily degraded and filtered out by the kidney, thereby prolonging the effective concentration time of the drug in the body. In addition, the long-chain PEG derivatives encapsulate the drug to prevent the drug from being rapidly enzymatically hydrolyzed or recognized by the immune system; thereby slowing down the release of the drug, stabilizing the blood drug concentration, and achieving long-acting and even high-efficiency effects. At the same time, PEG has steric hindrance, which masks the antigenic determinants on the surface of the protein and reduces immunogenicity. It is noteworthy that the “PEG dilemma” is brought after the PEGylation, which affects the interaction between carriers/drugs and cells, and limits cell uptake and endosomal escape resulting in the inevitably loss of bioactivity.

Biopharma PEG, a leading PEG derivatives supplier, has 3000+ PEG linkers in stock to empower your advanced research and drug development. These PEG derivatives are water-soluble, monodisperse, biocompatible, and almost aggregation-free, making them ideal for bioconjugation or crosslinking of proteins, antibodies, peptides, oligonucleotides, or solid surfaces to other macromolecules, therapeutic compounds or other small molecules, and dyes.

Mutation of specific sites of protein molecules can improve their stability and prolong the plasma half-life of protein and peptide drugs. For example, by mutating aspartic acid to glycine at position 21 of the A chain and adding two arginines at position 30 of the C-terminus of the B chain of human insulin, the resulting mutant can be released continuously in vivo and the blood concentration remains constant for up to 24 hours.

The introduction of fatty acid side chains can increase the hydrophobicity of the drug, reduce its renal excretion, and increase its biological half-life. In addition, fatty acids can be reversibly combined with human serum albumin in the body, and the combined complex is restricted in transmembrane transport due to excessive molecules, thereby prolonging the retention time of the drug in the body. The disadvantage is that non-specific modifications are often produced, which makes the later purification process more difficult.

Microspheres are an important branch of long-acting extended-release dosage forms that can significantly prolong the duration of action of drugs, significantly reduce the number of doses, and significantly improve patient compliance. More importantly, some microsphere formulations can protect encapsulated drugs - especially peptide and protein drugs - from premature degradation in the body. In the field of psychotropic drugs, microsphere formulations can also prevent drug abuse. PLGA is the most popularly used biodegradable material to prepare microspheres, accounting for 46% of all markets. The biggest drawback of microspheres is the high technical barriers to the production process.