Antibody–Drug Conjugates for the Treatment of Breast Cancer

In 2013, Trastuzumab emtansine (T-DM1) was approved by the FDA for the treatment of patients with HER2-positive metastatic breast cancer, making it the first antibody-drug conjugate (ADC) with an indication in solid tumors. Since then, ADC has become one of the fastest-growing antitumor drugs. Now, there are 3 ADCs approved for breast cancer, including Trastuzumab emtansine (Kadcyla), Trastuzumab deruxtecan (Enhertu), Sacituzumab govitecan (Trodelvy). And, these ADCs continue to evolve in terms of indications, targets and drug design (Figure 1).

Figure 1. Milestones of ADCs currently approved for the treatment of Breast Cancer

The unique drug design of ADC explores new therapeutic opportunities. With the ability to deliver a membrane-permeable payload, Trastuzumab deruxtecan and Sacituzumab govitecan are able to kill nearby target antigen-negative tumor cells through a bystander effect. Thanks to this effect, researchers speculate that Trastuzumab deruxtecan and other novel ADC drugs targeting HER2 may also be effective in patients with HER2-low expressing breast cancer.

There is a growing number of ADC drugs in development in breast cancer, with no shortage of novel study designs (Table 1.). If these agents continue to show promising activity in early studies, ADC drugs are expected to further transform the breast cancer treatment landscape in the coming years. 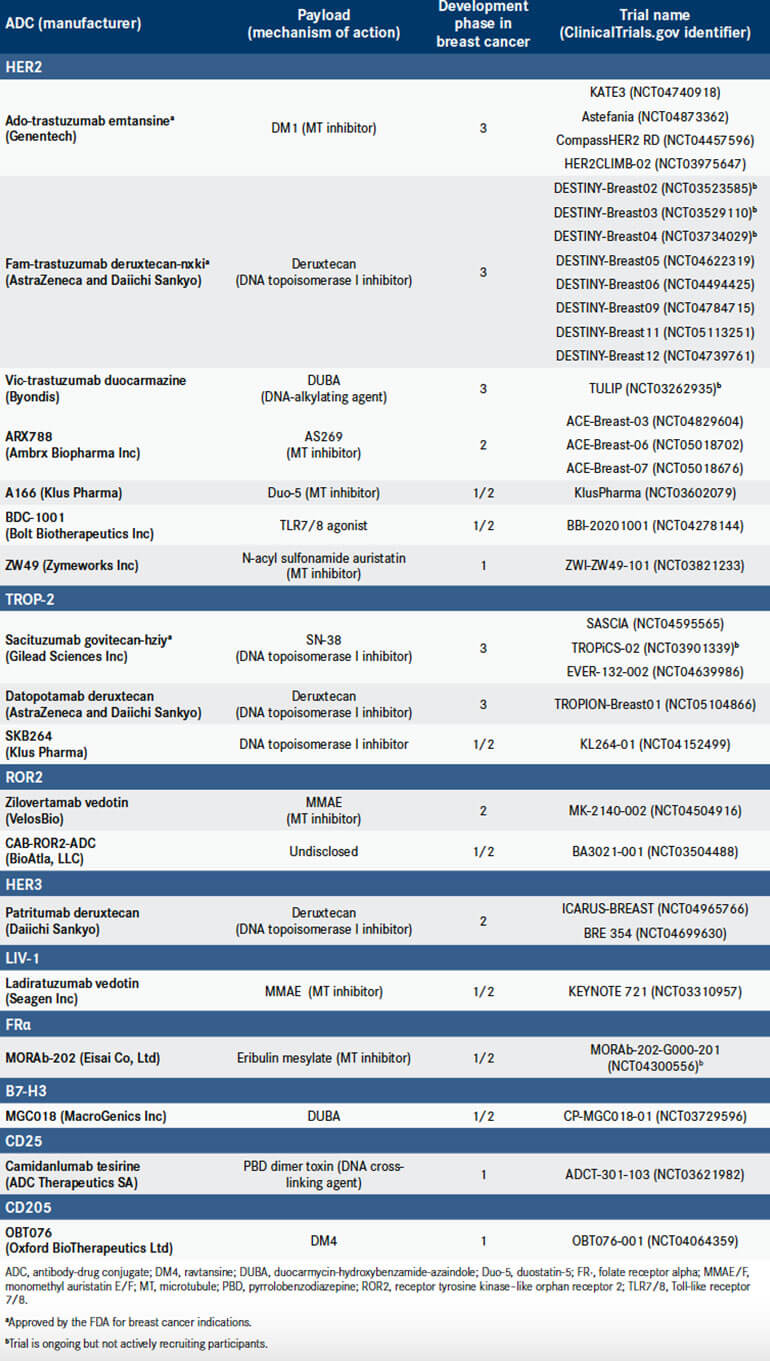 Table 1. ADC Drugs and Studies in Development in Breast Cancer

ADCs have been developed for decades, initially for hematologic malignancies, it works like a Trojan horse. ADC attaches to a receptor on the tumor cell through the antibody, gains entry and once inside, the ADC releases a cytotoxic drug (called a payload) that had been linked to the antibody.

T-DM1 consists of trastuzumab, a monoclonal antibody targeting HER2, combined with emtansine, a potent microtubule inhibitor, via a non-cleavable linker. T-DM1 has a drug-to-antibody ratio (DAR) of 3.5, which means that each trastuzumab molecule carries an average of 3.5 emtansine molecules. 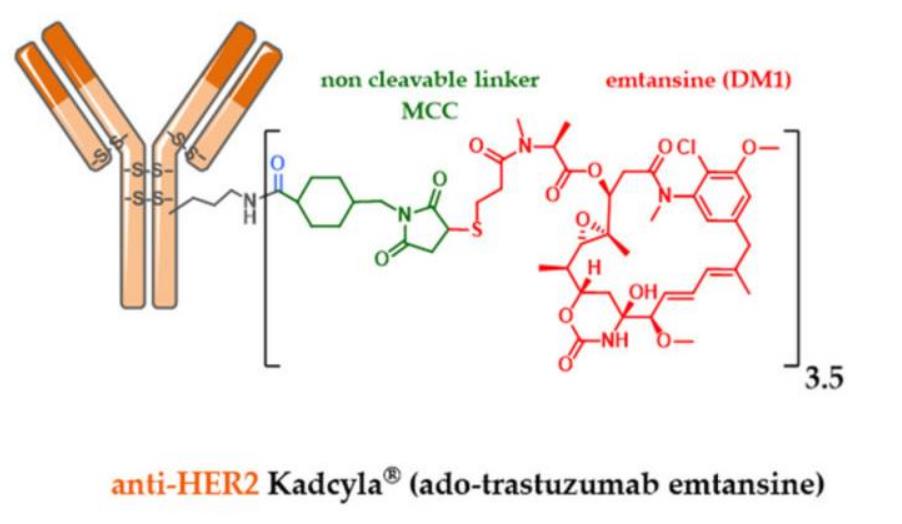 In the first-line treatment area, the MARIANNE trial showed that T-DM1 ± pertuzumab was non-inferior to trastuzumab + taxane for HER2-positive breast cancer. The median PFS for T-DM1, T-DM1 + pertuzumab, and trastuzumab + taxane were 14.1 months, 15.2 months, and 13.7 months, respectively. Although no advantage has been established, this novel combination therapy is usually less toxic and may provide better quality of life for patients.

While NCCN guidelines recommend that pertuzumab + trastuzumab + taxane is the preferred regimen for first-line treatment, T-DM1 offers a new option for patients who are not suitable for taxane drugs.

Based on the KATHERINE study, T-DM1 was approved in 2019 for the adjuvant treatment of HER2-positive early-stage breast cancer. T-DM1 significantly improved invasive disease-free survival (iDFS) compared with trastuzumab (HR=0.50,P<0.001).

T-DXd consists of trastuzumab, which targets HER2, linked to deruxtecan, a topoisomerase I inhibitor, by a linker (selectively cleavable by lysosomal histone proteases).

T-DXd has a higher DAR than T-DM1, carrying an average of 8 deruxtecan molecules per antibody molecule. It is generally believed that an increased DAR has a negative impact on pharmacokinetics, but this is not the case for T-DXd because of its novel " linker" design. The deruxtecan payload of T-DXd is also more membrane permeable than that of T-DM1, and therefore T-DXd would exhibit a strong "bystander effect".

Based on the Phase II DESTINY-Breast01 study, T-DXd received accelerated approval in December 2019 for the treatment of HER2-positive metastatic breast cancer with 2 or more prior HER2-targeted therapies. The DESTINY-Breast01 study showed an objective remission rate (ORR) of 60.9% and a median duration of remission (DOR) of 14.8 months for T-DXd.

Several studies evaluating T-DXd are ongoing, including the ESTINY-Breast03 study for head-to-head comparison with T-DM1. Preliminary results from the 2021 ESMO Congress showed that in 524 patients who received random assignment, T-DXd significantly improved median PFS progression-free survival (PFS) – the primary endpoint – compared with T-DM1 (hazard ratio [HR] 0.28; p=7.8 × 10-22), with median PFS not yet reached and 6.8 months, respectively.. Although the 12-month OS rate was numerically higher with T-DXd compared to T-DM1 (94.1% vs 85.9%), it was not statistically significant. Similar rates of Treatment emergent adverse events (TEAE) were observed for both drugs.

At the 2021 SABCS meeting, results of an exploratory analysis of the DESTINY-Breast03 study found that a PFS benefit of T-DXd was observed in multiple subgroups, including a median PFS of 15 and 3 months (HR=0.25) in the T-DXd and T-DM1 groups, respectively, in patients with baseline brain metastases (n=82).

Several other ADCs targeting HER2 are under clinical development, including SYD985 - trastuzumab with a DNA alkylator prodrug, duocarmycin-hydroxybenzamide- azaindole linked by a cleavable linker.

Other ADCs of interest that target HER2 include ARX788, ZW49 and BDC-1001. The payload of ARX788 is a microtubulin inhibitor; ZW49 is a bispecific ADC with both trastuzumab and patuximab binding sites that target HER2; and the payload of BDC-1001 is a Toll-like receptor agonist that stimulate anti-tumor immune responses rather than directly killing tumor cells. The preliminary antitumor activity of ZW49 and BDC-1001 has recently been demonstrated in ongoing Phase I/II studies.

At the 2021 SABCS Congress, it was announced heavily in the ACE-Breast-01 study that HER2-positive metastatic breast cancer treated with ARX788 (1.5 mg/kg every 3 weeks) in patients who had received multiple lines of therapy (29 patients) had an ORR of 66%, a median DOR of 14.4 months, and a disease control rate (DCR) of 100%. It is worth noting that the ORR of ARX788 was as high as 80% in the 5 patients who had previously received ADC drugs targeting HER2. ARX788 was well tolerated, with AEs mainly grade 1 or 2.

2. ADCs for Patients with Low HER2 Expression

Currently, HER2 low expression can be grouped with HER2-negative breast cancer in terms of treatment decisions and is not suitable for HER2-targeted therapy. However, this is changing, as novel ADCs with higher killing activity may show antitumor activity in this group of patients.

Two phase III studies designed to evaluate the efficacy of T-DXd versus investigator-selected treatment regimens for HER2 metastatic breast cancer are underway. The completed enrollment DESTINY-Breast04 study includes hormone receptor (HR)-positive or negative patients who have received 1 or 2 prior chemotherapies; while DESTINY-Breast06 includes HR-positive patients who have received two prior endocrine therapies.

TNBC does not express HER2; therefore, investigators are developing alternative targets. In the process of exploring targets related to Trop-2, a transmembrane glycoprotein overexpressed in breast cancer, Sacituzumab govitecan (IMMU-122) was created.

Sacituzumab govitecan is a first-of-its-kind ADC targeting Trop-2, a Trop-2 monoclonal antibody coupled to the topoisomerase I inhibitor SN-38 via a cleavable linker with a short pegylated unit. Sacituzumab govitecan has a high DAR (7.6) and has shown killing effects on surrounding tumor tissue in preclinical studies.

Based on the results of the Phase I/II IMMU-132-01 study, the FDA granted accelerated approval of Sacituzumab govitecan in April 2020 for patients with metastatic TNBC who had received at least 2 prior treatment regimens. The study included 108 patients with previously treated metastatic TNBC with an ORR of 33.3% and a median DOR of 7.7 months.

High expression of Trop-2 is seen in multiple breast cancer subtypes, and the IMMU132-01 study1 cohort included 54 patients with HR-positive/HER2-negative metastatic breast cancer with an ORR of 31.5% and a median DOR of 8.7 months.

The phase III TROPiCS-02 study is evaluating the efficacy of Sacituzumab govitecan versus chemotherapy in patients with this subtype.

A second ADC targeting Trop-2 is datopotamab deruxtecan, which is currently in clinical development. At the 2021 SABCS Congress, investigators presented results from the ongoing Phase I TROPION-PanTumor01 study of the metastatic TNBC cohort, in which the majority of patients received 2 or more prior treatment regimens, with 16% of patients previously treated with sacituzumab govitecan. Of the 38 patients who could be evaluated for response, ORR was 39%, all achieved partial remission (PR), and DCR was 84%. TEAEs included nausea, stomatitis, alopecia, vomiting, and fatigue.

4. Other Target for ADCs

Another member of the HER tyrosine kinase receptor family is HER3, which promotes activation of HER2. HER3 is overexpressed in breast cancer and is associated with poor prognosis and resistance to HER2-targeted and endocrine therapies.

Patritumab deruxtecan (HER3-DXd) is an ADC that targets HER3 and consists of patuximab coupled to deruxtecan via a novel cleavable linker that has a high DAR (8) and does not affect the drug's physicochemical properties.

A phase I/II study to evaluate the antitumor activity of HER3-DXd is currently underway, which includes HR-positive/HER2-negative metastatic breast cancer treated with multiple lines regardless of low or high HER3 expression.

Also, results of an interim analysis of TOT-HER3 showed that a single dose of HER3-DXd (6.4 mg/kg) correlated with clinical response in HR-positive/HER2-negative resectable patients who had not received hormone therapy.