The COVID-19 epidemic is the biggest uncertainty in the global drug market in 2021, spawning a $100 billion drug market while also having a more or less negative impact on hospital prescribing and commercial performance of many specialty drugs. However, for the market size of drugs in popular research areas, there is still a trend of expansion in 2021. This article gives a summary analysis of the current market landscape and future competitive trends of drugs in the top 10 most popular pharmaceutical research areas for your reference.

Currently, 19 PD-1/PD-L1 drugs are approved for marketing worldwide, an increase of 7 products compared to 2020. Despite fierce competition, the global market size continues to grow rapidly and has exceeded $33 billion.

In terms of specific drugs, Keytruda remains on top of the pack with continued high global sales of $17.186 billion. Opdivo, after its first decline, returned to positive growth again with the help of newly approved indications in oncology such as the GI tract, but the gap with Keytruda did not close. Tecentriq and Imfinzi maintained their positive sides in terms of growth. Overall, several products from MNC maintained a positive and optimistic trend in 2021, but the competitive landscape did not change. 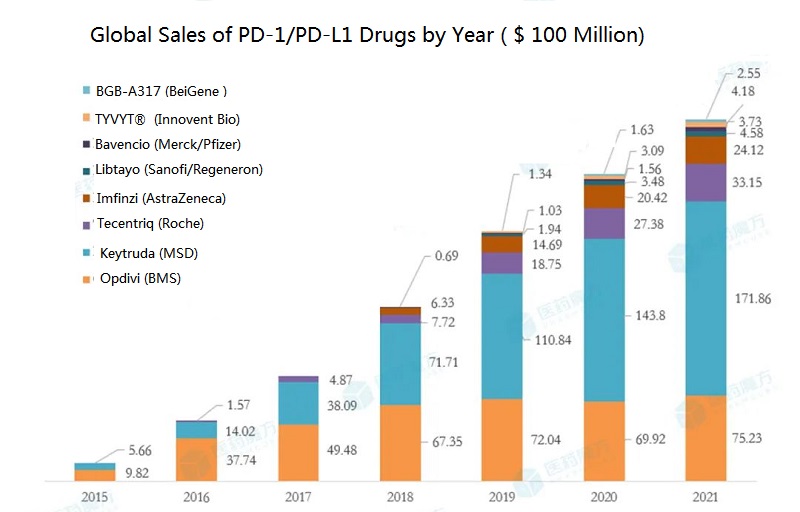 Moderna and BioNTech achieved worldwide fame with their mRNA vaccines, and their market value peaked at over 100 billion USD. Pfizer's global pharmaceutical business ranking jumped again to TOP 1. Comirnaty was ranked No. 1 with sales of $36.781 billion in 2021, a record for the first year of drug launch sales.

Antibody drugs have also played a key role in clinical treatment, but the constant mutation of the virus has led to several pauses and iterations in the market. Merck's small molecule COVID-19 oral drug has the first-mover advantage and is approaching $1 billion despite its lack of effectiveness. Pfizer's 3CL protease inhibitor Paxlovid is currently the most effective small molecule drug and a WHO-recommended preferred drug, with the advantage of fighting a wide range of viral variant subspecies, but with drug interaction concerns. With the Omicron pandemic, the demand for Paxlovid does not seem to be as strong as the symptoms of infected patients have waned. However, Paxlovid earned $76 million in revenue in its first week on the market and has reached $22 billion in contracted sales by early February 2022.
Related Articles: Overview of mRNA-Lipid Nanoparticle COVID-19 Vaccines 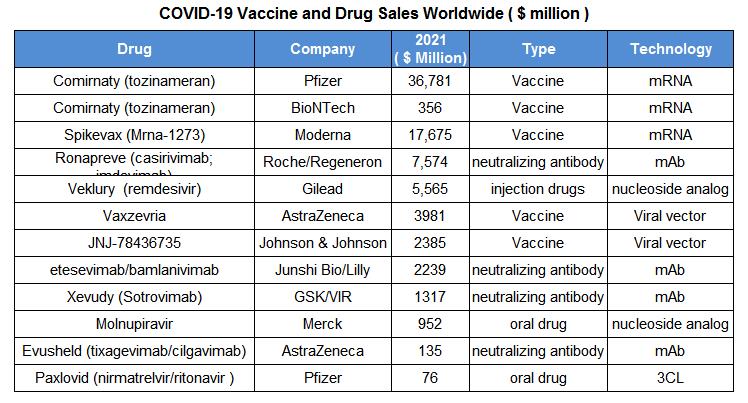 In 2021, no new BTK inhibitors were launched globally, and the market is still occupied by 5 products, which also reached a size of more than 11 billion USD. However, the market share is still dominated by ibrutinib, but the growth rate and trend have slowed down significantly.

The growth in the market size of ibrutinib has slowed down due to the absence of new indications and competition from acalabrutinib and zanubrutinib. Nevertheless, after the patent of lenalidomide expired, ibrutinib may become the new small molecule "king" in the oncology field.

In 2021, both acalabrutinib and zanubrutinib show significant growth, reaching $218 million and $1,238 million, respectively.

Velexbru (tirabrutinib) from Ono Pharmaceutical and Gilead and Orelabrutinib from InnoCare Pharma are only available in Japan and China, respectively. In 2021, Orelabrutinib achieved sales revenue of RMB 241 million. In addition, based on the potential of BTK inhibitors in multiple sclerosis (MS), Boeing Health entered into a licensing and collaboration agreement with InnoCare Pharma, which received a $125 million down payment from Boeing Health in September 2021.

The next generation of products for the BTK C481S mutation continues to progress, with data presented at ASH 2021 in particular for Pirtobrutinib again demonstrating competitive advantage. The data show significant efficacy of treatment with Pirtobrutinib in both BTK-treated disease progression and intolerance to discontinuation, with a particular advantage in CLL/SLL patients. 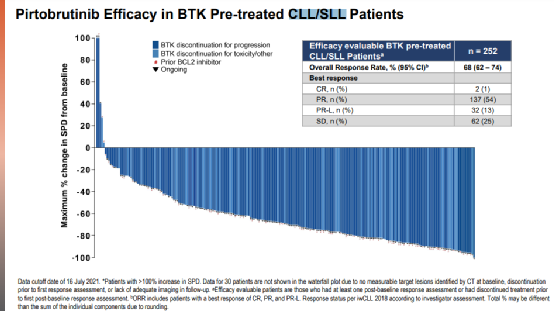 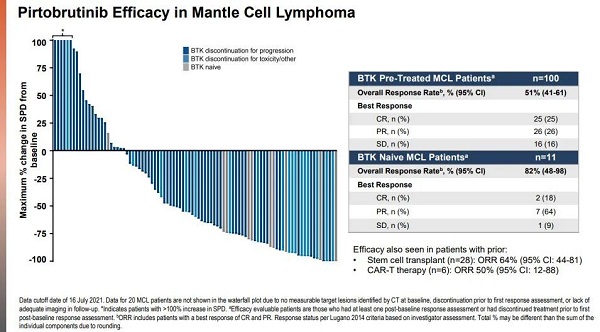 The success of ADC drugs, especially the emergence of DS-8201, has once again made HER2 a competitive target in the hot field. Although trastuzumab and pertuzumab have fallen off the radar, there are still no competing drugs in HER2 that can compete with them. Currently, patent-eligible HER2 innovators in the spotlight include tucatinib, margetuximab, trastuzumab emtansine (Kadcyla), trastuzumab deruxtecan (Enhertu), and disitamab vedotin.
Related Articles: ADC Drugs Global Sales of 2021 and Future Prospects 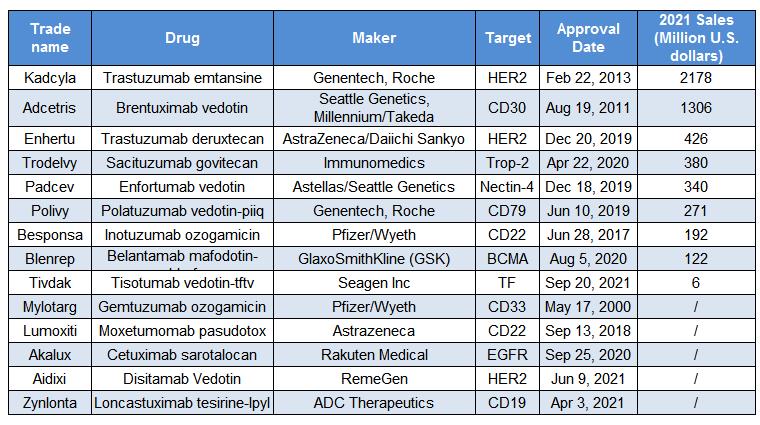 It can be said that trastuzumab emtansine remains the main market leader among the patent-phase drugs, ranking first with nearly $2.2 billion in sales as the first ADC in solid tumors. In 2021, Kadcyla's growth was mainly driven by the indication of adjuvant treatment for early-stage breast cancer. However, both the growth rate and the absolute value of growth are lower compared to 2020, especially in 2022 when it will face competition from Enhertu in the second-line breast cancer indication, and the growth trend may slow down further.

Enhertu has global revenues of $426 million in 2021, doubling ($202 million) compared to 2020. In 2021, Enhertu disclosed positive data from a head-to-head clinical phase III study in Her2-positive breast cancer, significantly improving patient OS compared to Kadcyla, and is expected to be approved in the first half of 2022 under FDA priority review acceleration.
Related Articles: HER2 Targeted Therapies In Breast Cancer

However, only Emicizumab, approved for hemophilia, exceeds the blockbuster drug threshold, with revenues of CHF 3,022 million in 2021. In addition, the blinatumomab has revenues of $472 million in 2021. Amivantamab, a highly regarded EGFR/c-Met bispecific antibody and the first approved second-line treatment for EGFR exon 20 lung cancer, Johnson & Johnson did not announce its sales results for the seven months during 2021.

No. 6 Drugs in Autoimmune Diseases

Autoimmune disease drugs are occupying an increasingly important place in the business of global pharmaceutical companies. The top 10 companies, alone, have revenues of more than $90 billion from their business in autoimmune diseases. 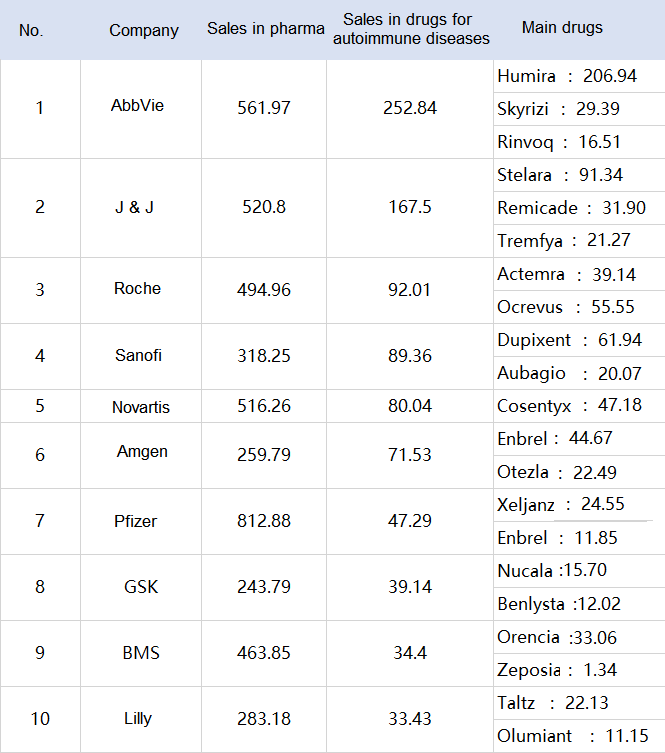 In 2021, following the publication of tofacitinib safety data, all marketing applications for JAK inhibitors were pressed the delay button by the FDA, although they were eventually released in succession after the product labeling was modified and black box warnings were added. However, expectations for JAK inhibitors were generally revised downward, and market valuations could not be the same.

In summary, there are many blockbuster drugs for autoimmune diseases, and the head-to-head studies between IL-4Rα, IL23p19, 17A/IL-17F, PDE4, JAK/Tyk, CD20, and other heavy hitters are even more dazzling.

CDK4/6 is a key regulator of the cell cycle, triggering the transition from the growth phase (G1 phase) to the DNA replication phase (S phase). CDK4/6 inhibitors block the cell cycle in the G1 phase, thereby inhibiting the proliferation of tumor cells.

In 2021, the competitive trend in CDK4/6 inhibitors will remain the same, with Ibrance dominating and Verzenio and Kisqali catching up. 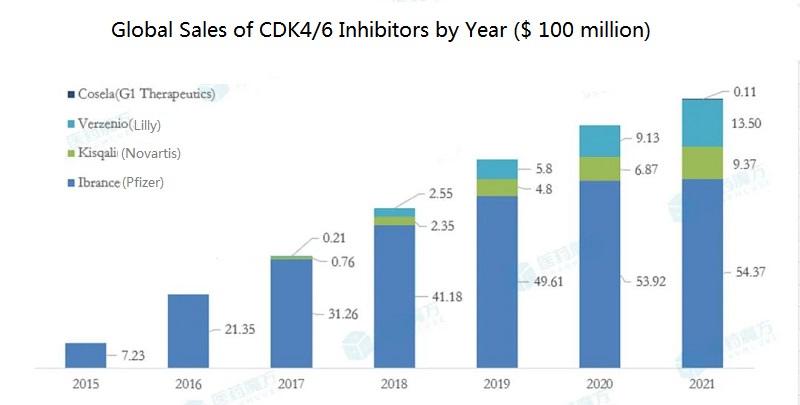 Ibrance has sales of $5.437 billion in 2021, an increase of only $45.5 million compared to 2020. Therefore, Pfizer is guarding its leadership position in the field by acquiring a global co-development and commercialization interest in Arvinas' PROTAC product, ARV-471, in 2021 for an upfront payment of $650 million, a potential $1.4 billion milestone and a $350 million equity investment.

Glucagon-like peptide 1 (GLP-1) is a gastrointestinal peptide that is released in response to food intake. GLP-1 plays an important role in glucose homeostasis and augments glucose-induced insulin secretion and inhibits glucagon secretion. The advantages of GLP-1 receptor agonists are that the incidence of hypoglycemic events is significantly lower than that of insulin, and they can reduce food intake and delay gastric emptying, facilitate weight control, and protect pancreatic β-cell function. 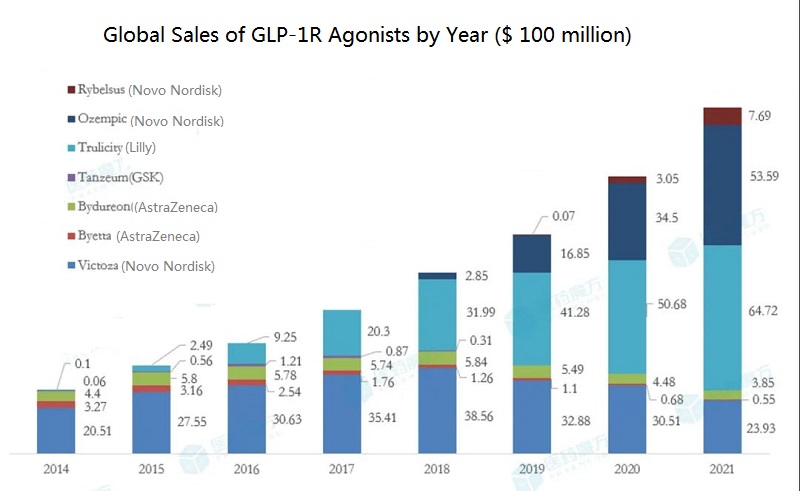 Though there are many competitors in the field of GLP-1 receptor agonists, the pattern seems to be settled. Eli Lilly remains the market leader with Trulicity (Dulaglutide), but has long lost its absolute advantage over Novo Nordisk's semaglutide. Therefore, the market performance of the dual GLP-1R/GIP agonist tirzepatide will be crucial. Tirzepatide has already filed for marketing, has previously shown superior efficacy in several large phase III SURPASS studies, and has been successful in head-to-head PKs with semaglutide. In addition, tirzepatide has also been developed for the treatment of obesity and combined obesity with heart failure with preserved ejection fraction and NASH, etc.

In addition, Novo Nordisk has launched an expanded indication for high dose semaglutide in order to better compete with Lilly's Trulicity and to address the upcoming launch of tirzepatide.

Chimeric antigen receptor T-cell (CAR-T) therapy involves extracting T-cells from a patient's blood and genetically modifying them in vitro with "chimeric antigen receptors" (CARs) that recognize specific antigens on the surface of cancer cells, enabling these cells to target the target antigens expressed on the surface of tumor cells. Once alive in the patient's body, the CAR-T cells will continue to multiply and eventually attack the cancer cells.

Currently, there are seven CAR-T therapies on the market worldwide. Gilead is steadily expanding its market footprint with Yescarta and Tecartus. Yescarta has sales of $690 million in 2021, up 23% from last year, and Tecartus also achieved $170 million in sales in its first full fiscal year. Recently, Yescarta received another milestone approval in large B-cell lymphoma (LBCL), becoming the first CAR-T available for second-line lymphoma treatment, and is also expected to continue to expand its market size in the U.S.
Related Articles: Significant Advances In The Treatment of Solid Tumors By CAR-T

Novartis' Kymriah is the first CAR-T cell therapy approved by the FDA. With expanded coverage, it reaches $587 million in sales in 2021, up 24% year-over-year. Last October, Kymriah's 3rd indication marketing application was accepted by the US FDA and EU EMA for adult patients with relapsed or refractory (r/r) follicular lymphoma (FL) after prior second-line therapy.

BMS also has two products on the market in the CAR-T space, with Breyanzi and Abecma contributing a combined $251 million in 2021. However, Breyanzi did not perform as well in its first year, with only $87 million, as it faces competition from similar products from Novartis and Gilead. Meanwhile, Abecma will also face competition from Carvykti, co-developed by Legendary Biologics and Johnson & Johnson, in 2022. BMS has high hopes for Breyanzi, seeing it as one of five drugs that will provide a significant contribution to BMS sales over the next two years and is expected to deliver $3+ billion in revenue in 2029.

PCSK9 (Protein convertase subtilisin/kexin type 9) is a neuronal apoptosis-regulating convertase that not only participates in liver regeneration and regulates neuronal apoptosis, but also binds to the low-density lipoprotein receptor (LDLR) on the surface of hepatocytes, interfering with LDLR recirculation and reducing the liver's ability to clear LDL-C from the blood LDL-C capacity, which in turn leads to hypercholesterolemia. Studies have shown that PCSK9 levels are significantly correlated with cholesterol, ox-LDL, and triglycerides, and is recognized as the most effective lipid-lowering target after statins. 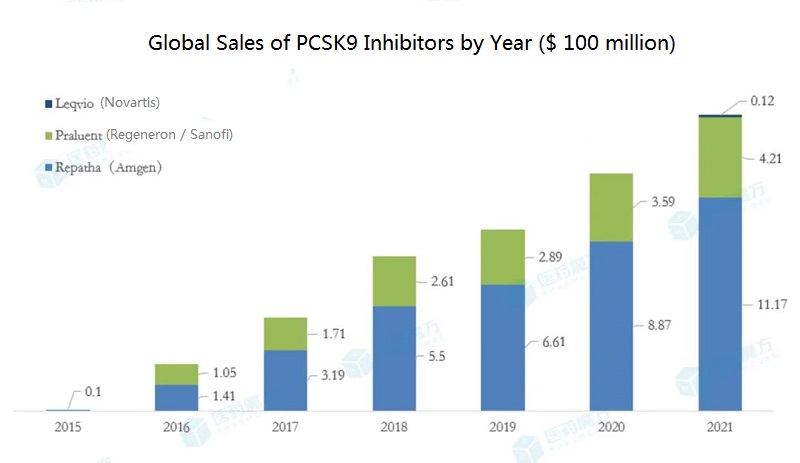 There are 3 PCSK9 inhibitors marketed globally, reaching a market size of $1.55 billion in 2021, with Amgen and Repatha continuing to hold the highest market share.

However, sales of Amgen in 2022 may not grow much, with some analysts predicting even lower performance than in 2021, mainly due to competition from Novartis' Leqvio (inclisiran). However, inclisiran generated only $12 million in sales in Europe in 2021 and will hit the U.S. market in 2022.

Leqvio is administered every six months during maintenance dosing, while Repatha is administered at least once a month. Analysts believe Inclisiran's overall low-price strategy could give Novartis more leverage in reimbursement negotiations and discount space with insurers, enabling it to emerge in an area where Repatha and Praluent are struggling due to payer barriers.