Things About PEGylation Technology and Biopharmaceuticals You Should Know

Release date：2019/9/19 18:24:50
PEGylation has become a well-accepted method for the delivery of biopharmaceuticals - especially peptide and protein drugs. Simple modification with polyethylene glycol (PEG) can not only "mask" the agent from the host's immune system (reducing immunogenicity and antigenicity), but also increase its hydrodynamic size (size in solution), which prolongs its circulatory time by reducing renal clearance. Thus, PEGylation today is mandatory to think about when developing a biopharmaceutical drug. This article gives an overview of established PEGylation technologies and new developments in the field.

Biochempeg is a biochemical company specializing in manufacturing polyethylene glycol (PEG) derivatives and offering PEGylation service. It also carries out contract development, with customized PEGylation and the supply of tailor-made PEG reagents.


PEGylation is the process of covalent coupling of non-toxic, non-immunogenic and non-antigenic, hydrophilic polyethylene glycol (PEG) to another molecule or functional groups of biologically active agents including proteins, peptides, antibodies, aptamers, and small molecules. 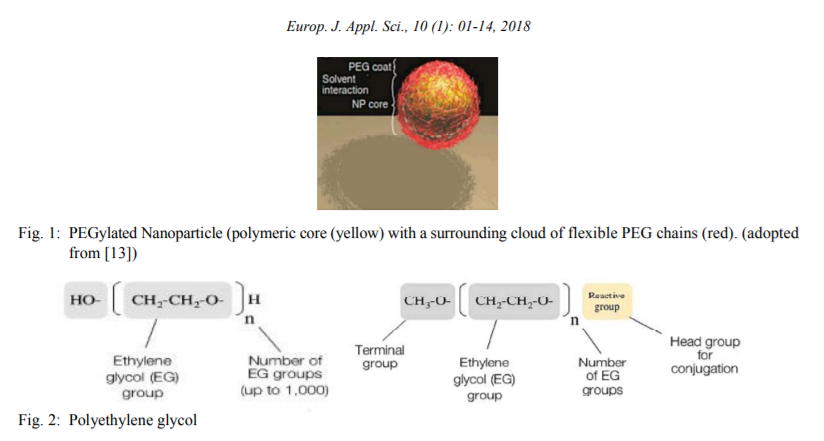 PEGylation was first reported in the 1970s by Dr. Frank Davis of Rutgers University. He wanted to make the new recombinant proteins less immunogenic in our bodies, and thereby enhance their circulation and activity lifetimes. He thought that if he could conjugate a hydrophilic polymer to the "new" protein, it might not be recognized by the immune system as a foreign molecule. In 1983, Professor Davis's Ph.D. student Abuchowski found an investor and established Enzon, the world's first biotechnology company with PEGylation technology. And in March 1990, the first PEGylated protein ADAGEN was approved by FDA.


The Impact of PEGylation on Biological Therapies


The history of chemical modification of proteins has been long. Since the study of protein structure, biochemists have used various chemical methods to modify the amino acid side chain groups of proteins such as sulfhydryl, amino, imidazolyl, sulfhydryl and fluorenyl groups, linking various chemical groups to examine protein structure and functional changes. Therefore, when Professor Davis's research on PEGylated proteins was published, it did not cause many repercussions in the biochemistry community. Moreover, when the enzyme is modified, the measured catalytic activity is reduced. From this point on, some people have a negative attitude towards PEGylation. Although modification can reduce the immunogenicity of proteins, the dramatic decline in biological activity has led researchers to give up on further exploration. However, when people enter the modified protein into the animal and measure its biological activity, it is found that the biological activity in the body is unexpectedly high and lasts for a long time. This discovery has inspired biotech companies because they can use this technology to develop long-lasting genetically engineered protein drugs. It has low activity in vitro and high activity in vivo, and it is a common phenomenon of PEGylated proteins, which many people have not thought of before.

Further studies have found that the increase in vivo activity is related to the molecular weight of PEG: An increase in molecular weight usually increases the drug's half-life in the body, thereby facilitating the production of higher molecular weight mPEG, 10,000 to 20,000, 30,000 or even 40,000, by polyethylene glycol manufacturers. Branched PEG was also synthesized and exhibited a better prolongation of half-life in vivo than linear PEG of the same molecular weight. So far, the listed PEGylated protein drugs have increased several times more than the half-life of the original drug. The use of the drug change from the original one needle per day to one needle per week which greatly facilitates the patient and also improves the drug efficiency. For example, PEGylated interferon is superior to unmodified interferon in the treatment of hepatitis C. Therefore, the original intention of PEGylation change from overcoming the immunogenicity to prolonging the efficacy and improving the therapeutic effect. 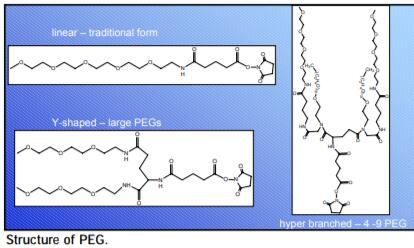 
Is PEGylated drug safe? People often ask such questions. Although this technology has been in existence for more than 30 years, and the drug has been on the market for more than 20 years, like any drug, it can't be answered “no problem” from a rigorous and scientific point of view. The side effects of a drug, especially the hidden, long-term side effects, often take many years to know. What can be said at the moment is that there are no reports of major accidents with PEGylated drugs, but people, especially those in the medical field, are paying attention to the possible side effects of these drugs.

Polyethylene glycol (PEG) has a long history as a medical excipient. PEG was used as one of the formulations in the early US FDA approved human gamma globulin lyophilized powder formulation. However, the PEG added here is a polyethylene glycol having a double terminal hydroxyl group, that is, a conventional PEG. Regarding conventional PEG, an animal safety test (Smyth et al., 1947) was conducted in the 1940s and its metabolism was explored (Schaffer et al., 1950). Tests have shown that the molecular weight is small, for example, PEG with only a few hundred MW, which has certain nephrotoxicity; when the molecular weight is greater than 1000, the toxicity is not obvious enough. For example, PEG with molecular weights of 1450, 3350, 6000 is administered intravenously to rabbits, and the total dose is up to 10g. /kg, no animals were found to be toxic. Tests on the metabolism have shown that renal exclusion is the primary means by which low molecular weight PEG is removed from the body. As molecular weight increases, fecal excretion is also a means of clearance from the body.
​
Since mPEG and PEG are very similar, only one hydroxyl group at the end is replaced, so it is inferred from the early PEG animal test data that mPEG is also biosafe. There are also articles showing that the mPEG (with MW 40,000) modified interferon is excreted in the feces by liver metabolism (Modi et al., 2000). However, in recent years, studies have found that mPEG-modified protein drugs cause the body to produce antibodies to PEG, thereby accelerating drug clearance. The production of this antibody may be related to the monomethoxy group at its end (Armstrong et al., 2007; Sherman et al., 2012). So far, the discovery of PEG antibodies has been limited to the reported PEG-modified protein drugs such as urate oxidase, which affects the efficacy to some extent, but whether it will have a negative impact on the human body requires further research.