Release date：2019/11/8 16:14:22
Nanoparticles are also called ultrafine particles, the most common is a polymer material made of solid colloidal particles, ranging in size from 1 to 1000 nm. The nano-drug delivery system is a new drug delivery system. Nanomaterial particles are similar to most large proteins in size, they are not easily rejected as foreign bodies in the body, and they can further biocompatible functionalization of nanomaterials, so it is easier to meet the biocompatibility requirements of drug carriers in tissues, blood, and immunity. At present, pharmaceutical micelle preparations prepared by using micelles formed of surfactants or polymer carrier materials in pharmacy are receiving increasing attention.

Polymer micelles consist of a unique core-shell structure. The hydrophobic core can entrap poorly soluble drugs, and the hydrophilic outer shell separates the drug from the water-soluble environment to stabilize the micelles while preventing the micelles from being excreted by the reticuloendothelial system in the body. How is the micelle formed? The surfactant is dissolved in water, and when its concentration is low, its molecules are dispersed in a single molecule or adsorbed on the surface of the solution to lower the surface tension. When the concentration of the surfactant increases until the surface of the solution is saturated and can no longer adsorb, the molecules of the surfactant begin to transfer into the interior of the solution. Since the hydrophobic portion of the surfactant molecule has less affinity with water, and the attraction between the hydrophilic portion is larger, when a certain critical micelle concentration(CMC) is reached, the hydrophobic portions of many surfactant molecules attract each other, and associate together to form an association, which is called a micelle or micelle. The micelles have various shapes such as spherical, cylinders, bilayers, etc.

The amphiphilic polymer is composed of hydrophilic and lipophilic components. At present, most of the hydrophilic segments of such polymers are polyethylene glycol (PEG). PEG is well water-soluble and high hydration properties, and it can provide sufficient Space steric for various microparticles such as micelles, nanoparticles, liposomes, etc. In addition, it is biocompatible and has been approved by the FDA, so it is widely used as a pharmaceutical excipient. In addition to PEG, other nonionic hydrophilic polymers can also be used as hydrophilic segments, such as polyvinylpyrrolidone (PVP). PVP also has good biocompatibility and water solubility. However, due to the limitation of synthesis conditions, the molecular mass of PVP is not as stable and controllable as PEG. Moreover, since PVP has a high boiling point, it is easy to form a hydrogen bond with a solvent, and it is easy to cause solvent residue. Therefore, the study of PVP as a water-soluble fragment for the preparation of amphiphilic copolymers is not as extensive as PEG.

Micellar is widely used in anti-tumor drugs, anti-fungal drugs, anti-inflammatory drugs, gene delivery, and other medical fields. PEG-lipid micelles are conjugates of polyethylene glycol (PEG) and distearyl phosphatidylethanolamine (DSPE) or PEG-DSPE, the flexibility in PEG-DSPE design has distinguished PEG-lipid micelles as the effective drug carriers. PEGylated phospholipid micelles have a simple preparation process, highly drug encapsulation rate, good stability in the body, easy industrial production, it is a drug delivery carriers with practical application value. The embedding process of PEGylated phospholipid micelles can increase the influx of drugs, enhance the efficacy of drugs, reduce their toxicity and side effects, and improve the compliance and therapeutic effects of cancer patients on chemotherapy. 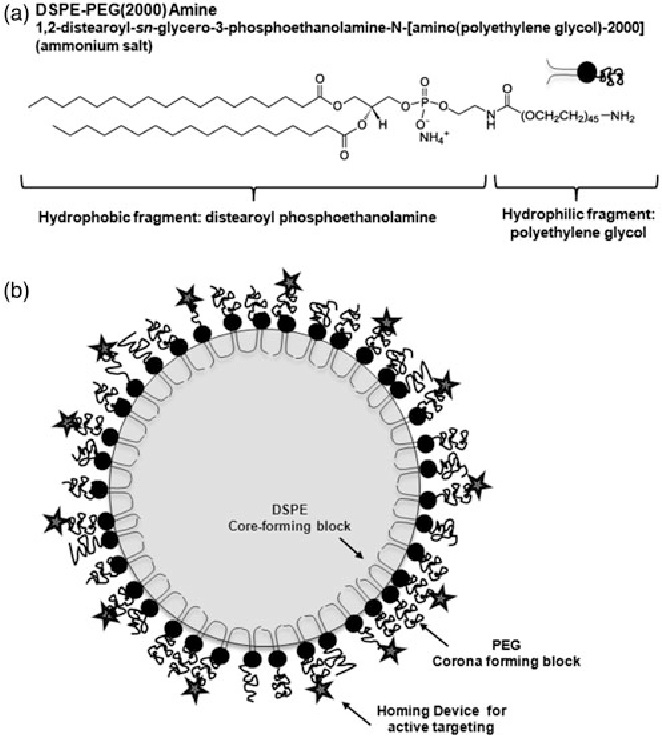 (a) Chemical composition of block copolymer of PEG–DSPE consisting of two distinct components; hydrophilic (PEG) and hydrophobic (DSPE) blocks. (b) Illustration of the core–shell structure of a multifunctional PEG–DSPE micelle with PEG corona, DSPE core and homing device attached on the surface to confer active targetability.  Image Source: https://www.semanticscholar.org/

Biochempeg has been focusing on the development of a full range of medical applications and technologies for nanocarrier systems (including various types of nanoparticles, liposomes, micelles, etc.), and has accumulated a large number of data models and rich research experience in the construction and optimization of nanocarriers for gene vaccines and protein drugs.