Release date：2020/2/13 15:40:51
Biopharmaceuticals have become increasingly attractive therapeutic agents and the PEGylation technology has brought more than a dozen protein drugs to the market. Surface conjugation of PEG to proteins can prolong its blood circulation time and reduce immunogenicity by increasing its hydrodynamic size and masking surface epitopes.

Despite this success, emerging literature highlights the presence of antibodies produced by the immune system that specifically recognize and bind to PEG (anti-PEG Abs), including pre-existing and treatment-inducing antibodies. Over the past few decades, free PEG has been used in a variety of applications such as osmotic laxatives, topical medications, cosmetics, and various other household and consumer products. As a result, many patients have been previously exposed to PEG, leading to detection of anti-PEG antibodies in human blood prior to administration of the PEGylated drug / NP. More importantly, in some clinical reports examining different PEGylated therapeutic agents, the presence of anti-PEG Abs has been associated with a loss of therapeutic efficacy and an increase in adverse reactions. Many studies have shown that anti-PEG antibodies limit the activity of PEGylated drugs and may compromise the activity of other effective therapeutic agents. 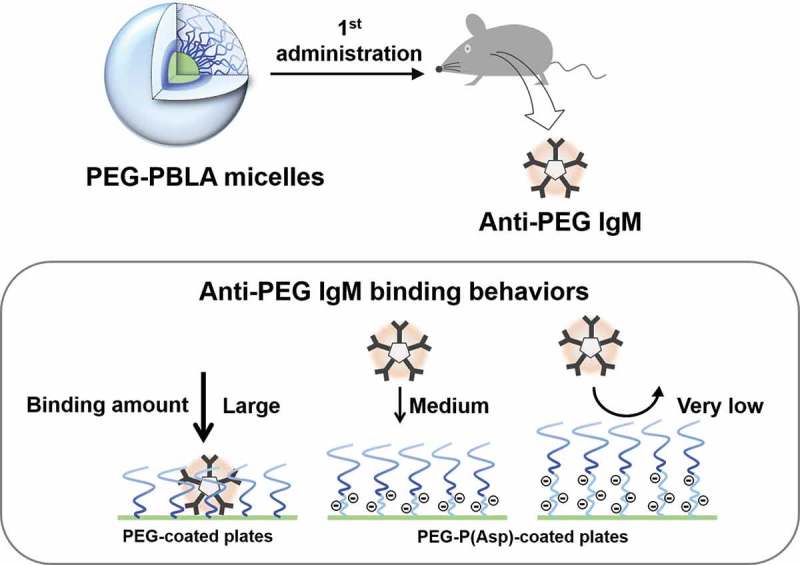 Image source: https://www.ncbi.nlm.nih.gov/
Therefore, the research community should develop strategies to overcome the PEG-related immune response. Researchers have studied ways to overcome the immunological problems of PEG using alternative hydrophilic polymers instead of PEG. The researchers believe that these polymers can form self-assembled nanoparticles and have less effective immunogenicity than PEG. More specifically, the replacement hydrophilic polymer did not exhibit the ABC phenomenon after repeated administration. Therefore, novel hydrophilic polymers other than PEG may have potential as drug delivery vehicles. On the other hand, the absence of the observable ABC phenomenon does not mean that there is no effective immunogenicity in these hydrophilic polymers. Various synthetic polymers, as well as natural products, show antibody-inducing effects. Therefore, researchers should conduct further and accurate evaluations of the use of alternative hydrophilic polymers. We should keep in mind that specific antibodies against each polymer need further evaluation. Another way to solve the problem of PEG immunity is to use immunosuppressive or immunosuppressive conditions to prevent PEG-specific specific immune response pathways and adverse side effects. This method can suppress the PEG-specific immune response. However, the use of these agents may trigger side effects. How we specifically inhibit the PEG-related immune response is a key issue that has been studied. In short, completely suppressing the PEG-related immune response is still a difficult challenge, and it is of great significance for the future design of drug carriers and biopharmaceuticals.