HER3, the freak of the EGFR family, has no or almost no intracellular tyrosine kinase activity. Although HER3 has been reported to have some kinase activity, it is 1,000-fold weaker than the kinase activity of the fully activated EGFR. Since HER3 cannot form a homodimer, its activation is dependent on the heterodimer and induces downstream C-terminal phosphorylation via another receptor of the heterodimer. A growing number of studies have shown that HER3 is highly expressed in most cancers and that high HER3 expression is also often associated with disease progression and/or poor prognosis and with the progression and metastasis of some cancers.

The preferred dimerization partners of HER3 are EGFR and HER2, followed by HER4 (Figure 1). HER3 also forms dimers with a number of non-EGFR family receptors, including the MET factor receptor and FGFR2. 6 of the 11 HER3 tyrosine phosphorylation sites are direct binding sites for PI3K, making HER3 a strong activator of PI3K/protein kinase B (AKT) signaling, a signaling pathway important for cancer cell survival. HER3 also activates MAPK signaling and stimulates cell proliferation. 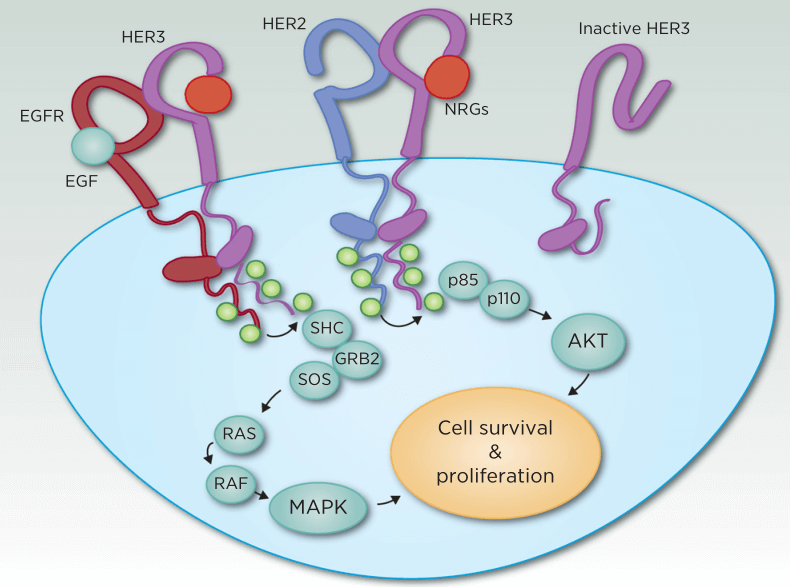 Figure 1. Preferred dimerization partners of HER3

HER3 is overexpressed in cancer and promotes tumor drug resistance

HER3 is commonly expressed in various cancers, including breast, ovarian, colon, gastric, lung, skin, and pancreatic cancers. In contrast to other EGFR family members, HER3 is not oncogenic when overexpressed alone. However, HER2:HER3 homodimer has the highest transforming ability among all possible EGFR family dimers. The superior oncogenic ability of the dimer allows HER3 to play an important role in HER2-mediated carcinogenesis of many types of cancers.

In addition, HER3 overexpression results in resistance to multiple therapeutic agents. Studies have shown that HER2:HER3-mediated signal transduction is associated with drug resistance to EGFR tyrosine kinase inhibitors (TKI), gefitinib in head and neck cancer and breast cancer . In colorectal cancer, increased HER3 ligands, NRG1, and HER2:HER3 dimerization make patients resistant to the EGFR antibody cetuximab. In addition, HER3 expression can also lead to resistance to hormonal therapy.

Monoclonal antibodies and small molecule TKIs are now essential therapeutic tools for a variety of EGFR, HER2 expressing tumors. HER3 targets have long been underappreciated due to low kinase activity. In recent years, HER3 has received increasing attention as the importance of HER3 in tumor progression and drug resistance has gradually emerged.

However, the development of oncology drugs targeting HER3 has not been smooth, with a high failure rate of (52%, 16/31), and no new drugs have been approved for marketing so far. Pharmaceutical companies such as Amgen (patritumab), AstraZeneca (sapitinib, KTN3379), Novartis (elgemtumab), and Roche (lumretuzumab) have all terminated the development of HER3-targeted drugs in their respective pipelines. However, there are still companies that have brought HER3-targeted drugs to the clinic, such as Merus' HER2/HER3 bispecific antibody, Daiichi Sankyo's HER3-ADC, and Elevation Oncology's monoclonal antibody Seribantumab.

Seribantumab, a monoclonal antibody targeting HER3, differs from Merus' HER2/HER3 bispecific antibody by employing an IgG2 isoform that has little ADCC effect. Functionally, it blocks not only the binding of NRG1 to HER3, but also the binding of HER3 to heterodimers such as HER2, thereby preventing the activation of related downstream signals. 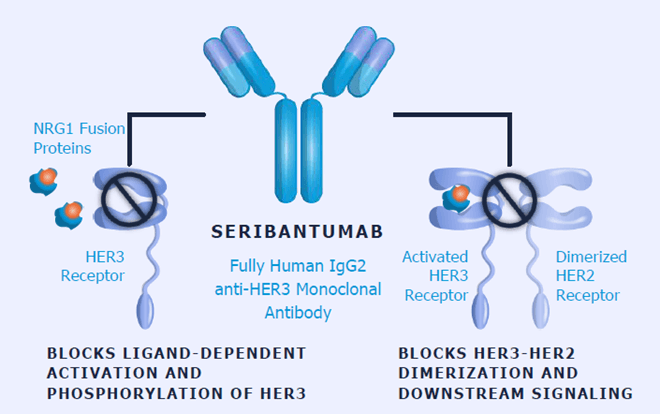 Seribantumab's Phase II clinical design is shown below and consists of three groups: Cohort 1 enrolls more than 55 patients who have not received prior ERBB, HER2 or HER3 targeted therapy and contain an NGR1 fusion; Cohort 2 enrolls at least 10 patients who have received prior ERBB, HER2 or HER3-targeted therapy with relapse; Cohort3 enrolls at least 10 patients without EGF-like NRG1 fusions or NRG1 fusions with other subgroups, etc. 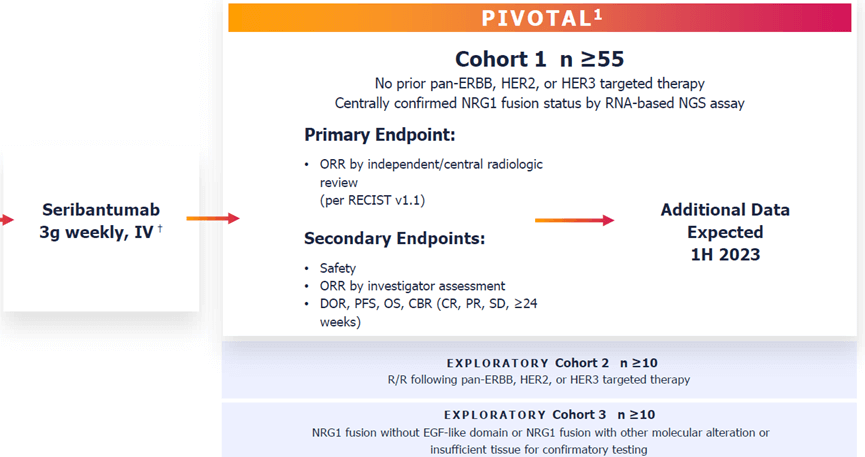 Efficacy: As of April 18, 2022, 12 patients were treated with seribantumab administered intravenously at 3 g weekly. 4 of these patients achieved objective remission i.e. ORR of 33%, with 2 patients in complete remission (CR: 17%) and 2 patients in partial remission (PR: 17%), for an overall disease control rate of 92%.

Zenocutuzumab（MCLA-128）is a bispecific antibody targeting HER2/HER3. Unlike traditional antibody screening by affinity and epitope, the screening of this antibody is mainly through non-differential screening, ignoring the effects of epitope and affinity on the antibody in the first stage, and mainly examining the antibody's ability to inhibit tumor cells at high HRG concentration, and enhancing the killing of tumor cells by ADCC enhancement design.

The latest Phase II clinical trial (NCT02912949) of the bispecific antibody MCLA-128, which primarily evaluates the efficacy of MCLA-128 in patients with NRG1+ gene fusions. As of 12 Jan 2022, 99 pts with NRG1+ cancer (85 eNRGy, 14 EAP) were enrolled.  Efficacy was assessed in 73 pts who received ≥ 1 dose of Zeno and who were enrolled as of 12 Jul 2021 to allow for the opportunity to have ≥ 6 months (mo) follow-up and met the criteria for the primary efficacy population. Of these, 41 patients with NSCLC, 18 with pancreatic cancer, 5 with breast cancer, 3 with cholangiocarcinoma, 2 with colorectal cancer and 4 with other tumors. Zeno was administered as 750 mg intravenously in biweekly courses.

In terms of safety, there were less than 5% grade ≥3 events in 208 patients treated with Zeno up to date.

HER3-DXd (patritumab deruxtecan) is an ADC drug targeting HER3 developed by Daiichi Sankyo, whose antibody part is patritumab, a monoclonal antibody against the extracellular structural domain of HER3, which effectively prevents the formation of HER2/HER3 heterodimers. HER3-DXd and DS8201 have the same load as deruxtecan (a topoisomerase I inhibitor) and are linked to the antibody via a maleimide-GGFG linker with a DAR of 8. Linker has high stability in the blood circulation, is cleaved by the enzyme in lysosomes in tumors and releases DXd that is able to cross cell membranes (with bystander effects).

Unlike Merus' HER2/HER3 bispecific antibody and Elevation Oncology's monoclonal antibody Seribantumab, HER3-DXd is not intended for the treatment of patients with NGR1 gene fusions, but rather for the treatment of HER3-expressing metastatic breast cancer (MBC).U31402-A-J101 is a multicenter. open-label 1/2 clinical trial, which began with a dose escalation trial (3.2-8.0 mg/kg IV Q3W), followed by a dose discovery trial, followed by a dose expansion trial. In the dose expansion experiment, there were three parts, HER3 high expression (4.8 mg/kg [n = 33] or 6.4 mg/kg [n = 31]); HER3 low expression (6.4 mg/kg [n = 21]) and HR-positive HER2 non-expressing or HER3 high expressing TNBC group (6.4 mg/kg [n = 31]).

Drugs targeting HER3 are starting to differentiate in terms of indications, with HER2/HER3 bispecific antibodies and HER3 monoclonal antibodies now mainly treating NGR1 gene fusion-related cancers, regardless of cancer type, which can be called pan-tumor therapy. Moreover, in terms of therapeutic strategy, HER3 monoclonal antibody uses IgG isoforms without ADCC activity, which allows for higher doses, while HER2/HER3 bispecific antibody Zeno uses ADCC-enhanced IgG1, which uses ADCC to kill tumors while blocking the binding of HER3 to its associated ligands.

HER3-DXd mainly targets HER3 tumor cells and is currently in clinical trials in NSCLC and breast cancer, where it is mainly used to kill tumors by targeting HER3-expressing tumor cells with loads.