Release date：2021/9/29 14:59:25
Gout is a common and complex type of arthritis, and all age groups may suffer from this disease. Patients with gout often experience sudden joint pain at night. The onset is acute, with severe pain, edema, redness, and inflammation at the joint side. These are all common symptoms of gout. The pain is gradually decreases and disappears, lasting several days or weeks. Gout attacks are related to the concentration of uric acid in the body, and urate will deposit in joint cavities and other places, then form tophi, stimulate the autoimmune system and cause acute joint pain. 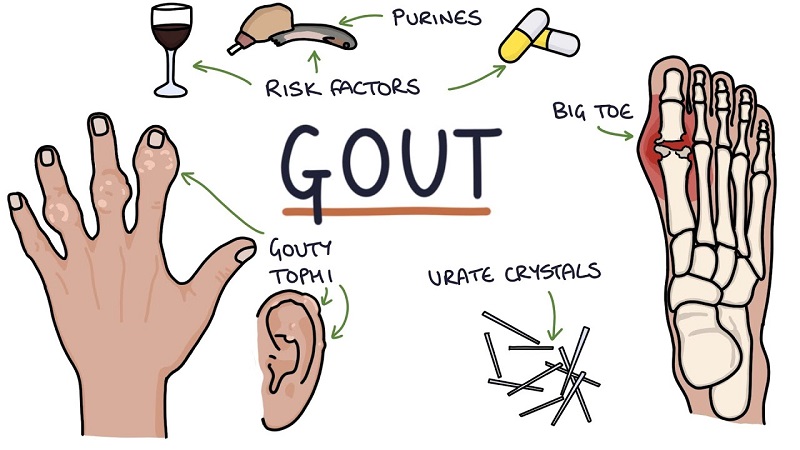 Uricase is an enzyme and is also a preparation of heterogeneous protein. It can directly act on uric acid to promote its metabolism, which can quickly oxidize uric acid into allantoic acid, which is no longer absorbed and excreted by the renal tubules. It can also act on the formed calculus uric acid to promote its dissolution, thereby curing gout. It has a good effect on hyperuricemia caused by nodular gout, urinary stones and renal failure.

Mechanism of action on PEG-uricase

PEG-uricase is a recombinant, PEGylated formulation of a modified porcine urate oxidase intended to dramatically lower the blood level of uric acid safely and continuously in patients who have not benefited from conventional treatments. Urate oxidase is a hepatic enzyme present in almost all mammals, but not in humans. It lowers the lever of uric acid in the blood by converting uric acid into allantoin, a benign substance which is then easily excreted in the urine.

Krystexxa is a PEGylated uric acid specific enzyme used to treat adult chronic gout patients refractory to conventional therapy. It was approved by the FDA in 2014 and is suitable for patients with intractable gout who have substandard blood uric acid levels or cannot tolerate oral uric acid-lowering treatment. PEG-uricase has high bioavailability and long half-life, which improves the patient's medication compliance. Uricase drugs are safer and have no effect on the liver and kidney functions of patients. They are ideal drugs for the treatment of gout.

The primary adverse events of uricase are infusion reactions, which occurs in up to 40% of patients, and appears before the onset of uric acid reduction, manifested as nausea, skin flushing, and dyspnea. High and low levels of antibodies are present in over 40% of patients, usually targeting the PEGylated portion, and are associated with loss of treatment response and increased risk of infusion response. Some patients who take the drug will have a severe allergic reaction, which occurs within 2 hours of taking the drug. Studies have shown that the use of immunosuppressive agents can reduce the risk of anti-PEG recombinant uricase antibodies.

Site-specific modification of uricase by PEG

PEG single site-specific modification of uricase has the advantages of high activity, long-term effect, low immunogenicity, good uniformity of pharmaceutical ingredients, stable and controllable quality, etc., which can prolong the half-life of uricase, maintain its stability and thus reduce the content of uric acid in serum, and treat hyperuricemia. If PEGylated drugs can be approved for marketing in the future, they are expected to bring good news to gout patients, alleviate pain and reduce treatment costs.

Long-acting is one of the main directions for improving the efficacy of PEG modified drugs. The advent of long-acting recombinant protein reduces the frequency of patient administration from once a day or even multiple times to once a week, greatly reducing the physical and mental pain caused by frequent injections, and also improving patient compliance to a certain extent. Safety problems such as secondary pollution due to frequent administration can be avoided, and the treatment burden on patients can be reduced from a long-term perspective. Therefore, PEGylated long-acting drugs are easily recognized by patients and have a good market response.