Seagen and Genmab A/S jointly announced recently that the U.S. Food and Drug Administration (FDA) has granted accelerated approval for the antibody conjugate drug (ADC) Tivdak (tisotumab vedotin-tftv) for the treatment of adult patients with recurrent or metastatic cervical cancer whose disease has progressed during or after chemotherapy. It is the twelfth ADC approved by FDA. The approval is based on tumor remission and remission persistence data, and subsequent full approval for this indication will depend on the validation and characterization of the clinical benefit in confirmatory clinical trials.

Tivdak will provide a new monotherapy option for women with recurrent or metastatic cervical cancer who have progressed after first-line chemotherapy and for whom there are limited treatment options available. 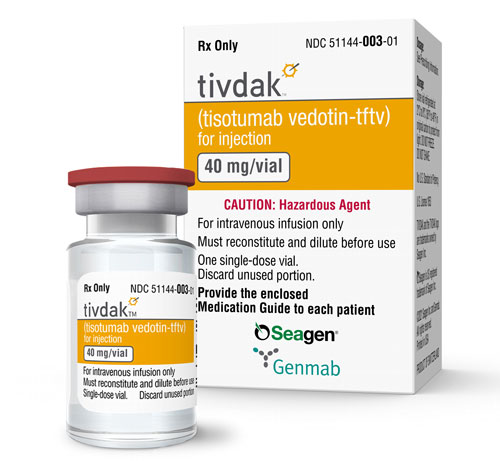 This approval is based on the results of the pivotal Phase II innovaTV 204 study. The data were presented at the European Society for Medical Oncology (ESMO) Virtual Congress in September 2020. The results showed significant efficacy of Tivdak as a monotherapy, providing clinically meaningful and durable objective remissions: an overall remission rate (ORR) of 24%, median duration of remission (DOR) of 8.3 months, and a manageable safety profile.

innovaTV 204 is an ongoing, single-arm, global, multicenter study in 101 patients with recurrent or metastatic cervical cancer who have received prior dual chemotherapy (with or without bevacizumab) but whose disease progressed, or who have received at least 2 therapies (including at least one platinum-containing chemotherapy) for recurrent and/or metastatic disease. The study evaluated the efficacy and safety of Tivdak (administered every 3 weeks). The primary endpoint was the objective remission rate (ORR) as assessed by a blinded independent center review (BICR), with key secondary endpoints including duration of remission (DOR), progression-free survival (PFS), overall survival (OS), safety and tolerability.

The results showed that the ORR of Tivdak treatment was 24% (95% CI:15.9-33.3%), with a complete remission rate (CR) of 7% (7 cases) and a partial remission rate (PR) of 17% (17 cases). The median follow-up was 10 months or with a median DOR of 8.3 months (95% CI:4.2-not reached). The median time from initiation of treatment to remission was 1.4 months (range: 1.1-5.1), and treatment response was generally observed within the first 2 treatment cycles. Subgroup analysis showed that remission rates were generally consistent between subgroups, regardless of tumor histology, number of prior therapies received, response to prior systemic regimens, and dual chemotherapy combined with bevacizumab as first-line therapy.

These results confirm that Tivdak induces clinically meaningful and durable remissions with a controlled and tolerable safety profile in patients with this difficult-to-treat cervical cancer. The approval of Tivdak for marketing is a major step forward for women with recurrent or metastatic cervical cancer. 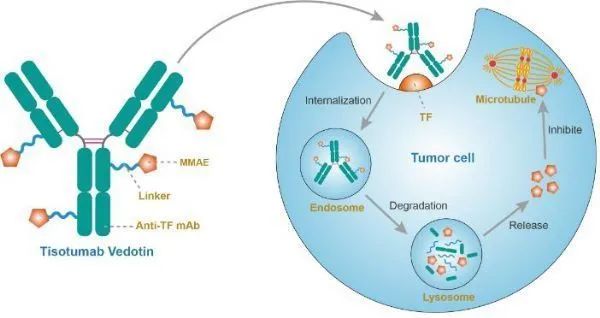 Cervical cancer originates in the cells of the cervix, and the disease remains one of the leading causes of cancer death in women worldwide, killing more than 311,000 women each year, the vast majority of them in developing countries. In developed countries, routine medical checkups and human papillomavirus (HPV) vaccination have reduced the incidence of cervical cancer. Despite these advances, many women are still diagnosed with cervical cancer that frequently recurs or metastasizes and can have devastating effects.

Tivdak's active pharmaceutical ingredient is tisotumab vedotin, an ADC drug that targets tissue factor (TF), combining Genmab's TF-targeting monoclonal antibody tisotumab with Seagen' ADC technology, which is designed to target TF antigens on cancer cells and deliver the cytotoxic agent MMAE ( monomethyl auristatin E) directly into cancer cells. In cancer biology, TF is a protein involved in tumor signaling and angiogenesis and is overexpressed in the vast majority of patients with cervical cancer and in many other solid tumors, including ovarian, lung, pancreatic, colorectal, and head and neck cancers. Based on the high expression and rapid internalization of TF factors in many solid tumors, TF is an ideal target for the development of ADC drugs.

Tivdak is currently being developed jointly by Seagen and Genmab as a monotherapy or in combination with other therapies for the treatment of recurrent and/or metastatic cervical cancer, ovarian cancer and other solid tumors. In addition, they are also evaluating the drug for weekly or 3-weekly dosing regimens.

Biochempeg, as a professional PEG derivatives supplier, is dedicated to being your most reliable partner to provide chemical synthesis and high-quality PEG linkers. We are committed to promoting the progress of your ADC discovery and development projects.