Antibody-drug conjugates (ADCs) are a new class of targeted drugs consisting of "mAbs, cytotoxic drugs, and linkers that link the two." The ADC was originally designed to increase the effectiveness of chemotherapy and reduce its toxicity. Since the antibody is targeted (can recognize cancer cell surface antigens), the cytotoxic molecules can be selectively "transported" directly into the tumor cells to exert an anti-cancer effect while avoiding effects on healthy cells.

So, how is the ADC drug designed? What is the principle of action? What is the current status of clinical application and development?

2. The Design Element of ADCs

As described above, the components that make up the ADC include tumor antigen-specific monoclonal antibodies, stable chemical linkers, and potent cytotoxic molecules (also called payloads). There are many important factors to consider when designing an ADC. 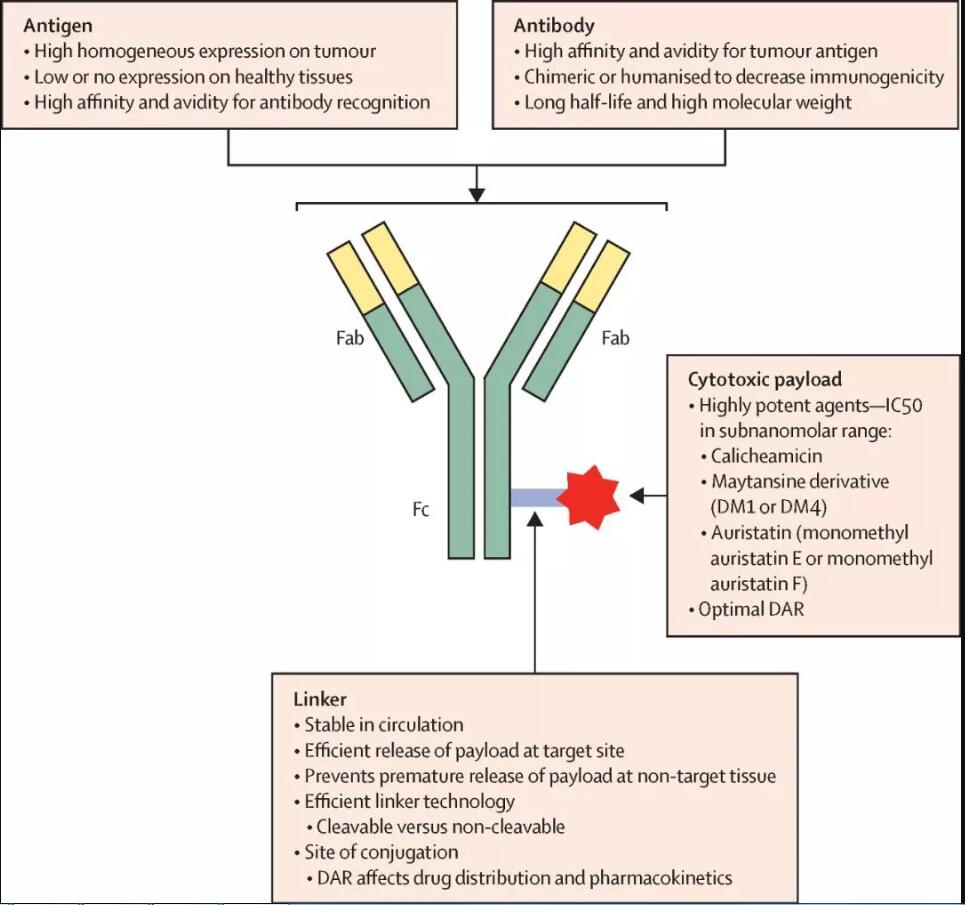 a) Antibody and target antigen

The desirable properties of the ADC antibody portion include: 1) minimal immunogenicity; 2) high affinity and avidity for tumor antigen, and efficient internalization (ADC-target antigen complexes need to be internalized by receptor-mediated endocytosis, allowing them to release potent cytotoxic loads in cells); 3) has a longer circulating half-life.

In terms of specificity, an ideal target antigen needs to have two characteristics at the same time: 1) high expression on the surface of target cells; 2) low expression in healthy tissues. In addition, the ideal shedding of the ADC should be as small as possible to prevent the free antigen from binding to the antibody in the circulation.

The basic parameters for selecting an effective toxic payload for the ADC include conjugating, solubility, and stability. The structure of the selected toxic molecule should be such that it can be coupled to a linker. In addition, the water solubility of the toxic molecule and the long-term stability in the blood are important because the ADCs are prepared in an aqueous solution and administered intravenously.

The linker is responsible for linking the cytotoxic payload to the mAb and maintaining ADC stability during the systemic circulation. The chemical nature of the linker and the conjugating site play a crucial role in the stability, pharmacokinetic and pharmacodynamic properties of the ADC, as well as the therapeutic window. Biochempeg has developed a series of peptides with discrete PEG chain which mitigates aggregation & immunogenicity in ADC.

An ideal linker must have sufficient stability to ensure that the ADC molecules do not break apart early, safely circulate through the bloodstream, and reach the target site; they must also be able to break quickly during internalization to release toxic payloads. According to the release mechanism of the load, currently available linkers are classified into two types: cleavable and noncleavable. The former relies on physiological environment to release payloads. A noncleavable linker is a non-reducible bond with an amino acid residue in a mAb and is, therefore, more stable in the blood; such a linker (such as a thioether linker) is dependent on the lysosomal degradation of the mAb to release its payload.

PEG derivatives are one kind of the most widely used linkers in targeted therapy with many features, such as high-usage rate, targeting, regulating PH value, etc. Biopharma PEG offers a variety of PEG linkers to facilitate antibody-drug conjugate (ADC) development projects. All PEG linkers are of >95% purity and they are the basic building blocks for a successful ADC.​ Two of the latest ADCs to be approved, Trodelvy and Zynlonta, were developed with PEG moiety as part of their linker technology to improve solubility and stability in vivo.

The conjugating characteristics of the connector are critical to controlling the therapeutic window of the ADC. The drug's drug to antibody ratio (DAR) or the amount of toxic drug attached to the mAb determines the potency and toxicity of the ADC. Although high drug loading can increase the potency of the ADC, it also increases off-target effects. In order to overcome the ADC drugs that produce various DARs in the production process, some studies have adopted innovative methods of site-specific conjugating to reduce variability, improve conjugating stability and pharmacokinetic properties, and ultimately produce more ADC drugs.

Briefly, the action mechanism of ADC is divided into five steps: 1) the ADC binds to the antigen on the target cell; 2) the ADC-antigen complex is internalized by endocytosis; 3) the ADC degrades in the lysosome; 4) the cytotoxic payload (drug) release and function; 5) target cell apoptosis.

Because of the low oral bioavailability of ADCs, such drugs are administered by intravenous injection. ADCs circulating in the blood first find and bind their target cells. After binding, the ADC-antigen complex is internalized by clathrin-mediated endocytosis to form an early endosome containing an ADC-antigen complex (Fig. 2A). The early endosome eventually develops into a secondary endosome prior to fusion with the lysosome. For ADCs with cleavable linkers, the cleavage mechanism (eg hydrolysis, protease cleavage, disulfide bond cleavage) may occur either in the early endosome or in the secondary endosome, but don’t occur in Lysosomal transport phase. However, for ADCs with noncleavable linkers, the release of toxic payloads (drugs) is achieved by complete protein degradation in lysosomes: proton pumps in lysosomes create an acidic environment that promotes proteases (eg cathepsin-B, plasmin) mediated proteolytic cleavage.

As one of the research and development hotspots in the field of medicine, more than 100 ADCs are currently in different stages of clinical development, and there are hundreds of ongoing clinical trials. Biopharma PEG, as a professional PEG derivatives supplier, is dedicated to being your most reliable partner to provide chemical synthesis and high-quality PEG linkers. We are committed to promoting the progress of your ADC discovery and development projects.

In summary, scientists believe that as technology advances, ADCs continue to iterate, and the choice of targets, linkers, and Cytotoxic Payloads are gradually improving. At the same time, with the development of immunotherapy, the choice of developing ADC Conjugation therapy is becoming more and more extensive. Therefore, in the future, ADC-based treatment options are expected to be used earlier for the treatment of certain types of cancer patients.