In 2000, the launch of Mylotarg from Pfizer marked the debut of antibody drug conjugate (ADC), a complex that couples a cytotoxic small molecule drug to a monoclonal antibody via a rationally constructed linker to selectively deliver an effective cytotoxic drug into the tumor. During the eleven years between the initial launch of Mylotarg and its withdrawal in 2010, no new ADC drugs were marketed. However, in recent years, the pharmaceutical market has witnessed a new wave of ADC development.

Up to 2022, there are 15 ADC drugs on the market worldwide (Figure 1). After the withdrawal of the first drug Mylotarg, the ADC drug market did not go into a lull. In 2011, Adcetris, an ADC drug developed by Seattle Genetics in collaboration with Takeda, was launched in the U.S. Kadcyla, an ADC drug developed by Roche's Genentech, was launched in the U.S. in 2013. Both ADC drugs have received good market repercussion. Below are details of the ADC drugs approved in each country. 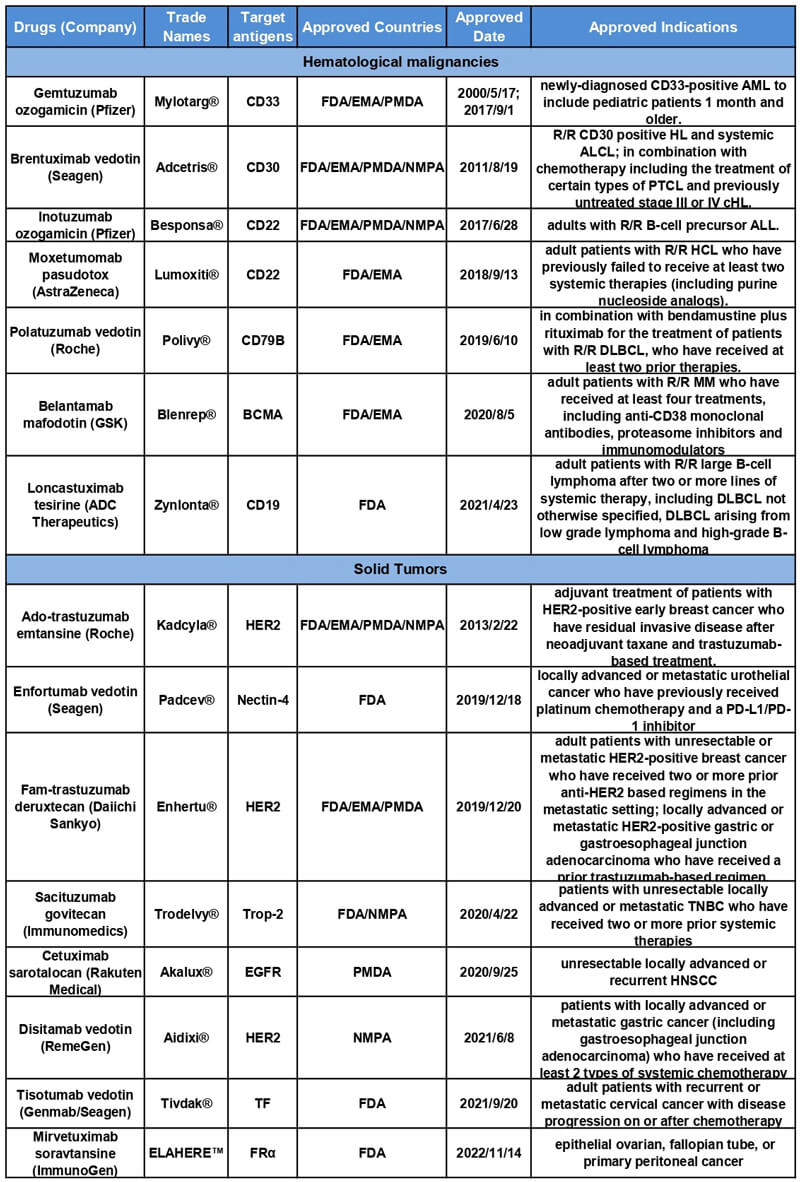 Figure 1: Global Approved ADCs. Two of the latest approved ADCs, Trodelvy and Zynlonta, were developed with PEG chains as part of their linker technology to improve solubility and stability in vivo.

China Approved ADCs: A total of five ADC drugs are currently on the market in China. The Chinese market has just seen a boom in ADC drugs. In 2020, Adcetris and Kadcyla, two of the world's first ADC drugs on the market, were approved for launch in China, generating a total of US$570,000 in sales in 2020. In 2021, RemeGen Co's Disitamab vedotin (Aidixi®) and inotuzumab ozogamicin (Besponsa) were approved for marketing. On June 10, 2022, the NMPA approved Trodelvy.

Currently, the indications for ADC drugs are all focused on the oncology field. Among the 13 drugs that have been marketed, 6 drugs target solid tumors (breast cancer, bladder cancer, gastric cancer, etc.) and 7 drugs target hematologic tumors. Overview of ADC drug R&D layout, there is more R&D targeting solid tumors in the clinical trial stage. In contrast, the proportion of hematologic tumors has increased at the ready-to-market stage. Companies are also actively expanding the range of indications for ADCs, such as AbbVie's ABBV-3373, which is under development and has also shown promising clinical activity in clinical trials for the treatment of patients with rheumatoid arthritis. How to broaden the range of indications for ADC drugs will also be key to gaining market share for the drugs.

The ADC field is now on a high-profile, with more ADC drugs expected to come to market in the next five years (figure 3).

Trastuzumab duocarmazine (SYD985), developed by Byondis, is an ADC drug targeting HER2 in a Phase III clinical trial for the treatment of HER2-positive metastatic breast cancer. In January 2018, based on data from a large number of Phase I clinical trials in pretreated HER2-positive breast cancer patients, the FDA granted it Fast Track designation. Data from the phase 3 TULIP trial (NCT03262935) showed that trastuzumab duocarmazine yielded positive progression-free survival for patients with pretreated HER2-positive metastatic breast cancer. Byondis plans to submit a biological license application for the agent before the end of 2021.

Datopotamab deruxtecan (Daiichi Sankyo/AstraZeneca) and SAR408701 (Sanofi) are both in phase III clinical trials and are being developed for the treatment of treated metastatic NSCLC. Datopotamab deruxtecan targets TROP2 in patients with no targeted gene mutations. SAR408701 targets CEACAM5, which is coupled to the maytansinoid DM4 cytotoxic agent via a cleavable linker, and is targeted at patients with CEACAM5 overexpression (approximately 20% of lung adenocarcinomas). Helix BioPharma's L-DOS47 targets CEACAM6 (which is overexpressed in a variety of epithelial malignancies) and is currently in phase II clinical studies for the treatment of NSCLC and pancreatic adenocarcinoma.

Camidanlumab tesirine, jointly developed by ADC Therapeutics and Genmab, is an anti-CD25 ADC drug currently in a pivotal Phase II clinical trial to evaluate its efficacy in patients with R/R Hodgkin's lymphoma.

Probodydrug conjugates are masked ADC drugs that are activated by proteases specifically expressed in the tumor microenvironment. The potential benefits of this technology include protection of normal tissue expressing target antigens from ADC drugs and increased effective drug dose to tumor tissue. CX-2029 (CytomXTherapeutics / AbbVie) and CX-2009 (CytomX Therapeutics) are probodydrug conjugates that target CD71 and CD166, respectively, and are currently in Phase II clinical development.

As a worldwide leader of PEG linker tools, Biopharma PEG offers a wide array of different ADC Linkers to empower our customer's advanced research. These compounds feature great aqueous solubility, smart choice of PEG length, and a broad selection of functional groups to choose from.