Diabetes is a globally concerned disease characterized with hyperglycemia. Currently there are eight types of diabetes drugs. Among these drugs, glucagon-like peptide (GLP-1) drugs are strongly recommended by major diabetes treatment guidelines for their glucose-lowering effects, as well as for their weight-lowering, blood pressure-lowering, cardiovascular and renal protective effects. In the early stage, GLP-1 drugs had a short half-life in vivo, requiring frequent injections with poor patient compliance. With the development of long-acting GLP-1 drugs and the extension of its half-life, the market share of GLP-1 drugs is growing.

What Are GLP-1 Receptor Agonists?

Glucagon-like peptide-1 (GLP-1) is considered an ideal drug for the treatment of type 2 diabetes mellitus (T2DM). GLP-1 is a glucose-dependent intestinal hypoglycemic peptide hormone secreted by L cells in the terminal jejunum, ileum and colon. This peptide hormone promotes glucose-dependent insulin secretion, inhibits glucagon secretion, suppresses appetite, and stimulates islet β-cell proliferation and inhibits their apoptosis. However, the half-life of natural GLP-1 in plasma is less than 2 min because it is rapidly enzymatically degraded by DPP-IV. Extending the half-life has become a key issue in GLP-1-related studies. Therefore, GLP-1 receptor agonists have been developed to extend the half-life.

From the table, we can clearly find the two kinds of GLP-1 RAs, long-acting and short-acting GLP-1 receptor agonists.  Short-acting RAs, such as exenatide (Byetta), lixisenatide and beinaglutide, have a duration of action of only a few hours after being subcutaneously injected., thus need multiple times injection daily. Long-acting agonists include liraglutide, exenatide(Bydureon®), albiglutide, dulaglutide, semaglutide, and PEG-loxenatide, which can maintain an appropriate agonist level in plasma throughout the 24 hours of the day.

In 1987, scientists discovered that GLP-1 promotes insulin secretion, and five years later, an entero-insulin analogue, Exendin-4, which is 53% homologous to GLP-1, was isolated from the saliva of the Mexican giant lizard, later known as exenatide, which has GLP-1 receptor agonist activity and a half-life of 2.4 hours. The rapid degradation of GLP-1 in humans is largely due to the fact that the alanine in position 8 is readily recognized and cleaved by dipeptidyl peptidase (DPP-4). Whereas, it is the glycine in this position of exenatide that is well resistant to be degraded by DPP-4. In 2005, the FDA approved exenatide (Byetta®) for the treatment of type 2 diabetes mellitus.

Subsequently, to further extend the effect of exenatide, Amylin and Eli Lilly developed exenatide injectable microspheres (Bydureon®), which was approved in the United States in January 2012. Compared to Byetta, which is injected twice daily, Bydureon requires only one injection per week. As the first weekly formulation of GLP-1 to be marketed, Bydureon has greatly improved patient compliance. The benefits of a long-acting GLP-1 RAs are beginning to emerge.

After Exenatide was approved for the treatment of type 2 diabetes, several pharmaceutical companies began various developments aimed at GLP-1 receptor stimulation with improving effectiveness and longer duration of action.

On January 25, 2010, the FDA approved Novo Nordisk's liraglutide (Victoza ®). Liraglutide was designed to provide an almost unchanged amino acid sequence compared to mammalian GLP-1. The free fatty acid side chain was coupled to the peptide to facilitate binding to albumin in plasma and interstitial fluid. Only a small proportion (estimated 1-2%) of liraglutide circulates in the free (non-albumin bound) form, ready to diffuse into tissues and bind receptors. The albumin-bound bulk forms a reservoir promoting prolonged action. Overall, the elimination half-life is approximately 13 hours, making it a suitable formulation for once-daily injection.

In order to further extend the half-life of GLP-1, the tightness of the binding of GLP-1 drug molecules to HSA needs to be enhanced. However, numerous studies have shown that HSA hinders the binding of GLP-1 molecules to the receptor. Therefore, new drug molecules must have both high HSA binding and receptor affinity. Novo Nordisk followed the design concept of liraglutide to ensure that the peptide sequence is as consistent as possible with natural GLP-1, while focusing on the selection of fatty acid side chains. On the basis of liraglutide, more than 40 candidates were screened again, and finally semaglutide was finally obtained. Compared with liraglutide, the side chain structure of semaglutide was more complex (Figure 1). These changes give semaglutide a long half-life of about 160h, and it only needs to be injected once a week for glucose control. Semaglutide injection (Ozempic ®) was approved by the FDA on December 16, 2017. 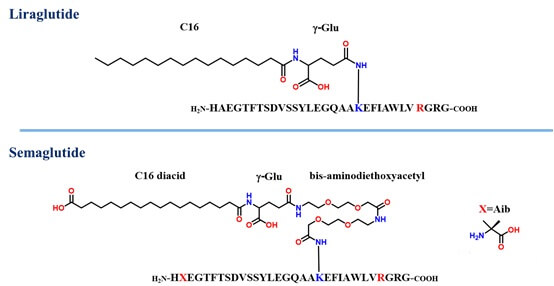 Figure 1. Structure of Liraglutide and Semaglutide

Eli Lilly, a long-time rival of Novo Nordisk in the diabetes field, was certainly not left behind. Eli Lilly had made early attempts to modify the fatty acid side chain of GLP-1, but did not make a mark in the field. So Eli Lilly chose a different route for long action GLP-1 - the Fc fusion protein, which led to the arrival of dulaglutide.

Fc fusion protein technology is the most studied and fastest progressing protein fusion technology. Receptor-mediated cellular endocytosis and lysosomal degradation are important pathways for protein clearance. While in plasma, the relative molecular weight of immunoglobulin IgG is greater than the renal filtration threshold. Moreover, using the recognition of the conserved region Fc fragment and the neonatal Fc receptor (FcRn), IgG can escape lysosomal degradation after endocytosis with a half-life of 2 to 3 weeks through the FcRn-mediated recirculation mechanism. Dulaglutide exploits this property of the Fc fragment to extend the half-life by linking the amino acid-substituted GLP-1 molecule to the N-terminal end of the Fc fragment via a 16-amino acid junction (Figure 2). The half-life of dulaglutide reached 90h, and the study showed that the hypoglycemic effect of its weekly injection was not inferior to that of daily injection of liraglutide.

In 2014, the FDA approved the first HSA fusion protein, albiglutide (Tanzeum®). Like liraglutide and Semaglutide, albiglutide also benefits from HSAs for long-acting purposes. The difference is that while liraglutide and Semaglutide are reversible through the binding of fatty acids to HSA and their GLP-1 drug molecules can act independently of HSA, albiglutide is genetically engineered to express two GLP-1 molecules fused to HSA in a tandem repeat to form a new protein molecule in a similar manner to dulaglutide. The purpose of the tandem repeat is to keep the N-terminal end of the GLP-1 molecule away from the HSA to reduce the interference of the HSA with receptor binding. However, in August 2017, GSK announced that it intended to withdraw the drug from the worldwide market by July 2018 for economic reasons.

On December 19, 2016, the National Medical Products Administration (NMPA) of China approved the marketing application for Beinaglutide. Beinaglutide is claimed to be the world's first GLP-1 drug with an amino acid sequence identical to that of human origin. However, it is due to the fully humanized sequence that the half-life of Beinaglutide in vivo is extremely short and the frequency of 3 injections per day is much criticized by patients. Fortunately, in May 2019, another GLP-1 drug, polyethylene glycol loxenatide, was launched, effectively alleviating this embarrassing situation.

Polyethylene glycol (PEG) is one of the rare synthetic polymers approved by the FDA for in vivo injection, which has low relative molecular weight polydispersity, good aqueous phase and organic solubility, and is widely used in the modification of protein drugs. PEG can increase the apparent relative molecular mass of spherically modified proteins by 5 to 10 times and significantly reduce the glomerular filtration of protein drugs. In addition, PEGylation reduces the clearance of protein drugs by reticuloendothelial tissue, shields antigenic determinants, reduces immune system recognition, and prevents degradation by proteolytic enzymes. Polyethylene glycol Loxenatide is a class 1 chemical drug developed by Jiangsu Hansoh Pharmaceuticals, which is administered by only one injection per week. Molecularly, PEG Loxenatide was selected from exenatide, with the difference that the 8th position is mutated to D-Ala, and additionally PEGylayted at the cysteine site using lysine as a linker (Figure 3).

Biochempeg, a leading worldwide PEG derivatives supplier,  provides PEG derivatives for PEGylated peptide and protein drugs and a variety of supporting technical services. We will support you in all aspects of PEGylation from the laboratory R&D level to the scale-up level.