Since the introduction of insulin one hundred years ago, more than 80 peptide drugs have been marketed for the treatment of a wide range of diseases, including diabetes, cancer, osteoporosis, multiple sclerosis, AIDS, and chronic pain. Peptides, a hot topic in the post-genetic era, have been widely used in drug development. A recent review in Nature Review Drug Discovery, "Trends in peptide drug discovery," summarizes the major trends in peptide drug development.

Milestones In The Development Of Peptide Drugs

In 1922, the first peptide drug insulin was introduced, which was originally extracted from the pancreas of cattle and pigs to treat diabetes. In 1954, chemist Vincent du Vigneaud completed the first total synthesis of oxytocin and vasopressin, for which he was awarded the 1955 Nobel Prize in Chemistry. In 1963, the solid-phase peptide synthesis (SPPS) technology was created to automate peptide synthesis by assembling amino acids on the solid phase, which greatly facilitated the development of peptide drugs. The advent of recombinant technology in the 1980s made it possible to produce green peptides on a larger scale. The biggest drawback of peptide drugs is the short plasma half-life and the tendency to be cleared by renal filtration, strategies to increase the molecular weight of peptides by covalent linkage with lipids, proteins or polyethylene glycols (PEGs) have been developed in recent years to overcome this drawback. New screening techniques and new chemical approaches are also fueling the development of peptide drugs (Figure 1). 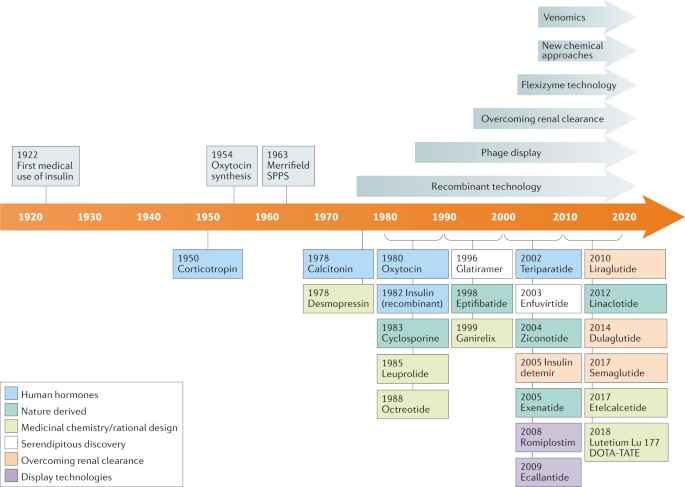 Peptide drugs occupy a special position by filling the gap between small-molecule chemical drugs and large-molecule biologics. The number of peptide drugs approved worldwide has grown steadily over the past 60 years, with an average growth rate of 7.7% (Figure 2b). In 2019, global sales of peptide drugs exceeded $50 billion, accounting for 5% of the global pharmaceutical market (Figure 2a), with insulin and its analogs accounting for approximately 50% ($25 billion), followed by the glucagon-like peptide 1 (GLP1 ) receptor agonists dulaglutide ($4.4 billion) and liraglutide ($4.1 billion) (Table 1). The majority of currently approved peptide therapeutics are agonists (Figure 2c), and the most common indications are related to endocrinology, metabolism and oncology (Figure 2d). 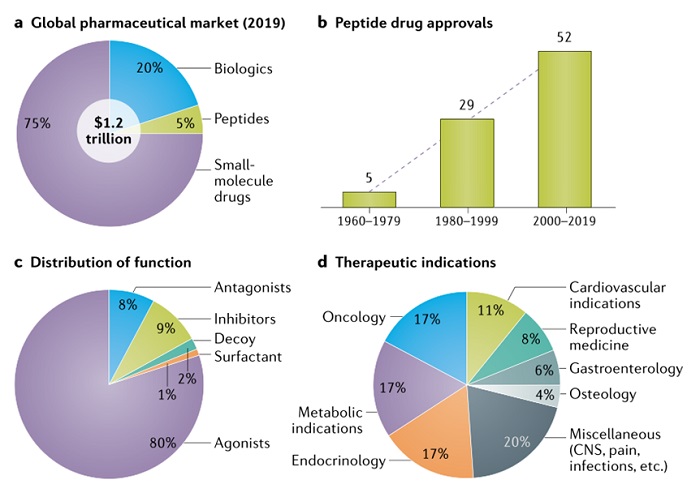 Peptide drug research in the early twentieth century focused on the action of human signaling hormones. The short half-life of endogenous peptide hormones, only a few minutes, hindered their clinical application. Scientists took several medicinal chemistry approaches to modify peptides to increase their stability while improving other properties. Two representative examples are growth inhibitor Somatostatin and Insulin, where chemical modifications, such as point mutations, N-terminal or C-terminal extensions, peptide chain cyclization, or the affixation of long-chain aliphatic hydrocarbons, have been used to improve the stability, potency, and selectivity of these endogenous ligands, culminating in the successful marketing of several drugs (Figure 3).

Cyclosporine (Figure 4a) is a peptide isolated from a fungus and is a neutral, hydrophobic cyclic peptide containing 11 residues. The high degree of nitrogen methylation and cyclic structure of cyclosporine make it resistant to protease hydrolysis, in addition, hydrophobicity and conformational flexibility allow it to be orally bioavailable. The approval of cyclosporine as an immunosuppressive drug in 1983 was an inspiring example of the discovery of the medicinal value of natural products and a reminder of the potential of peptides and peptidomimetics to be developed as oral agents. Exenatide (Figure 4b), derived from the venom of highly toxic lizards, was approved in 2005 for the treatment of type 2 diabetes and was the first highly successful GLP1 receptor agonist drug. Human GLP1 (7-37) has a short plasma half-life, is rapidly degraded by dipeptidyl peptidase 4 (DPP4), and is eliminated by the kidneys within 1-2 minutes. Exenatide is 53% homologous to human GLP1(7-37), a complete agonist of GLP1 receptor with stability against DPP4 degradation and low renal elimination rate. 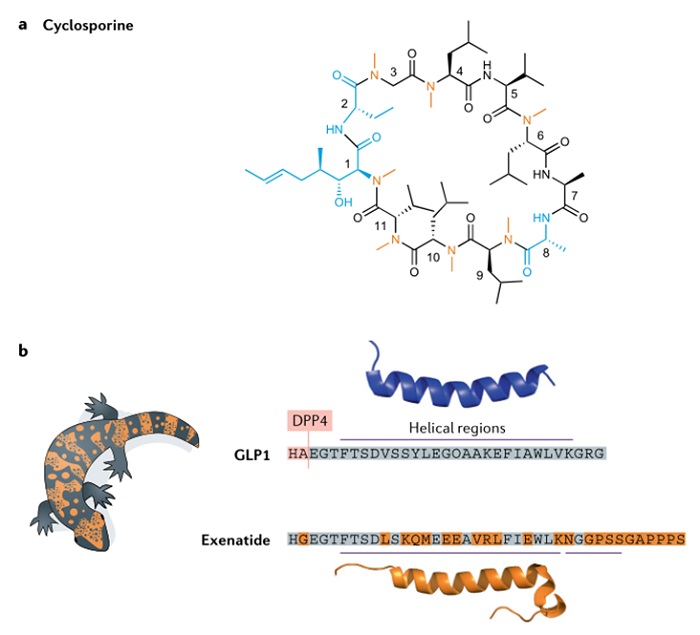 Venomics and display technologies are two key technologies for the discovery of therapeutic peptides. Venomics uses bioinformatics to analyze genomic and transcriptomic data from toxic animals as well as proteomic data obtained from crude venom samples. This approach allows the identification of a large number of venom peptide sequences, which can then be obtained by synthetic or recombinant techniques and can be screened against therapeutic targets. Display technologies, including phage display, yeast display, mRNA display, ribosome display, and deoxyribonucleic acid display, are among the more advanced peptide drug discovery technologies available today (Figure 5). They establish a link between phenotype (peptide) and genotype (DNA or RNA) and can generate peptide libraries with huge sample size (1010-1015) and screen them against therapeutic targets. After multiple rounds of screening to obtain high-affinity peptide leads, medicinal chemistry strategies are then used to improve the drug-forming properties of the leads.

Traditional medicinal chemistry strategies, including N-terminal acetylation, N-methylation, use of d-amino acids, unnatural amino acids and amide bond mimics (e.g., thioamides, mimetic peptides and β-amino acids) (Figure 6), are simple and effective in regulating peptide metabolic stability and bioavailability and will continue to play an irreplaceable role in peptide drug development. New chemical modification methods, such as N- to C-terminal cyclization, use of disulfide bond mimics, α-helical stapled solidification and embellished peptides, will be increasingly used in the design of peptide drugs to improve druggability. 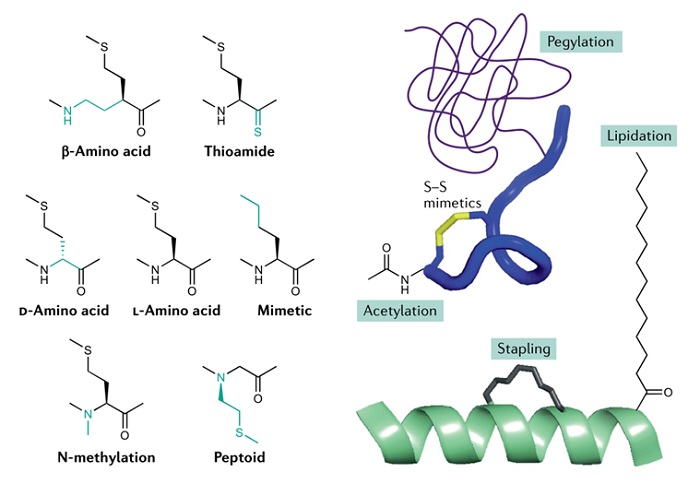 Most peptide drugs are administered by injection, which has disadvantages such as poor patient compliance, risk of infection and biohazardous needle waste. Therefore, it has become imperative to develop alternatives to injectable drug delivery. Various pump technologies offer alternatives to injections, such as microtechnology-based implantable pumps, which offer more precise control of drug delivery, but pump implantation is invasive and requires refilling at the time of use. Non-injectable delivery alternatives include needle-free injections, such as liquid jet injectors, but pain and bleeding can occur at the injection site and the amount of drug delivered cannot be precisely controlled. Other methods include the use of skin-penetrating peptides, ultrasound, or electric fields to increase the skin penetration of peptide drugs. Pulmonary and nasal delivery are two other potential routes of drug delivery for which drugs have been marketed, but with safety concerns and limited delivery efficiency. In addition, considerable effort has been invested in developing strategies that enable oral delivery of peptide drugs, and oral delivery is limited by enzymatic digestion of peptides in the gastrointestinal tract and their limited penetration in the intestinal epithelium. One strategy to overcome these barriers is to use them in conjunction with an osmotic enhancer, a strategy that has been clinically successful (e.g. Semaglutide). Other strategies include pH modulation, use of mucus permeation agents, enzyme inhibitors, hydrogels, enteric patches, enteric capsules, or enteric devices. Intracellular protein-protein interactions (PPI) are also important drug targets, and given that most peptides have low membrane permeability, cell-penetrating peptides (CPPs) have also been developed to facilitate the delivery of peptide drugs across cell membranes.

Biochempeg, as a professional PEG supplier,  offers PEGylation as a cost-effective modification of peptides which has the potential to improve bioavailability compared to the unmodified molecule.