When it comes to blockbuster drugs in these two years, it is necessary to mention the HER2-directed antibody-drug conjugates (ADC) jointly developed and commercialized by Daiichi Sankyo/AstraZeneca: DS-8201 (T-DXd, Trastuzumab Deruxtecan, trade name: Enhertu).

Enhertu consists of a HER2 monoclonal antibody (trastuzumab) attached to a topoisomerase I inhibitor  (DXd)  payload, an exatecan derivative (DX-8951 derivative, DXd), via a stable tetrapeptide-based cleavable linker. 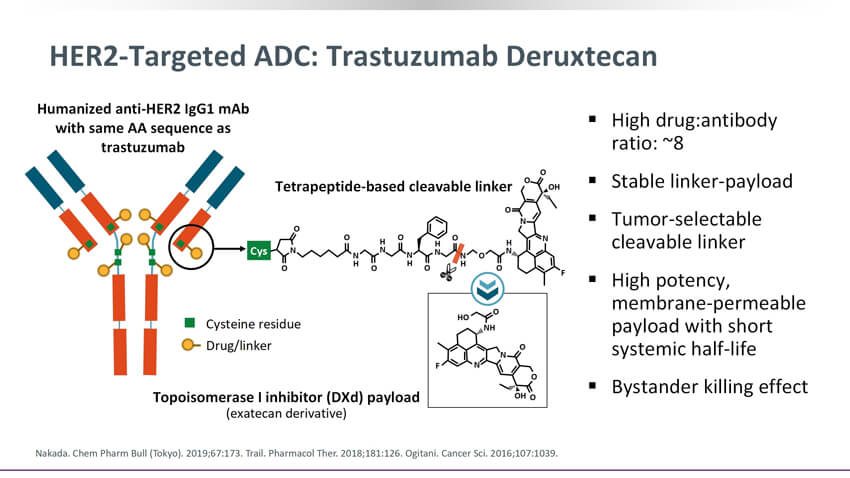 Enhertu belongs to the third generation of ADC drugs. Benefiting from the site-specific conjugation technology, ENHERTU has a homogeneous and high drug-to-antibody ratio  (DAR)  of ~8 molecules of cytotoxic agent per antibody. Meanwhile, it can exert bystander effect, with significantly enhanced killing effect, especially on cancer cells with low expression of antigens.

Enhertu possesses a high DAR compared to other ADCs, reaching a theoretical maximum of 8 and ensuring homogeneity. Enhertu couples approximately 8 cytotoxic molecules per antibody, which are stabilized in plasma by a unique tetrapeptide linker and can be selectively cleaved by enzymes upregulated in tumor cells, making targeted local delivery of payload possible. Statistically, the number of cytotoxic drugs carried by the marketed ADC antibodies is generally scattered randomly, ranging from 2 to 5. The high DAR allows the efficacy of Enhertu to be considered 2 to 4 times higher than previously approved marketed ADC drugs.

Secondly, Enhertu has bystander effect. The cleavable tetrapeptide linker releases DXd hydrolysate by the action of lysosomes, which has good lipophilicity and is more favorable to penetrating the cell membrane bilayer phospholipid structure and plays a bystander effect. Thus, regardless of the HER2 expression level of tumor cells, high cell membrane permeability can extend its cytotoxic effect to neighboring tumor cells, and the bystander effect of T-DXd only acts on the tumor microenvironment and does not lead to systemic toxicity. 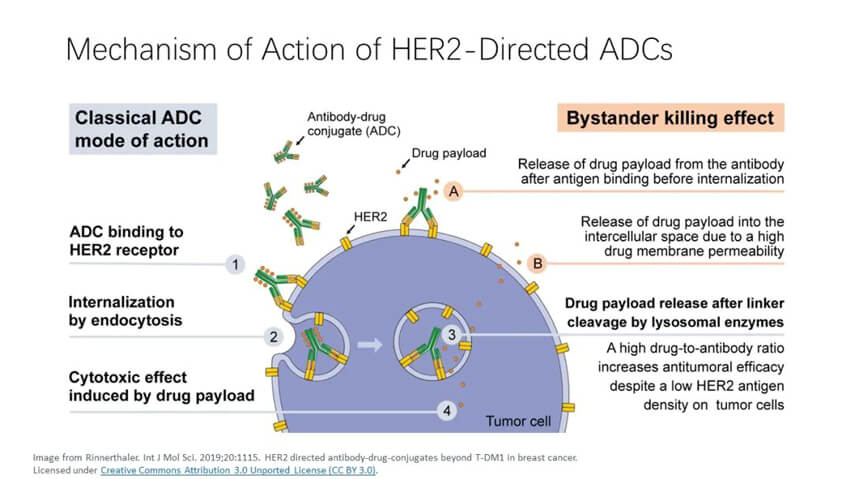 Due to the high DAR and bystander effect, Enhertu also exerts potent antitumor effects in patients with low HER2 expression (IHC1+ or IHC2+/ISH-). Clinical data showed that after co-culture of HER2 high expressing cells and HER2 negative cells, DS-8201 was able to kill both HER2 high expressing cells and HER2 negative cells. On August 6, 2022, the FDA granted accelerated approval of DS-8201 for the treatment of patients with HER2 low-expressing metastatic breast cancer, making it the first HER2-directed therapy to show a survival benefit in HER2-low metastatic breast cancer. This approval is based primarily on data from the phase III trial DESTINY-Breast04, which showed that DS-8201 demonstrated superior progression-free survival and overall survival benefit over chemotherapy. Specifically, in the HR+ and overall populations, the DS-8201 group had significantly better mPFS of 10.1 and 9.9 months and mOS of 23.9 and 23.4 months, respectively, than the control group. 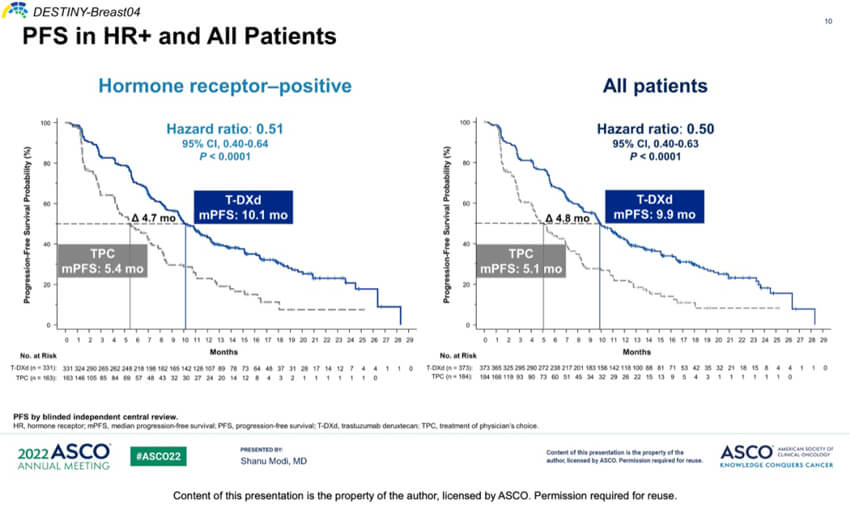 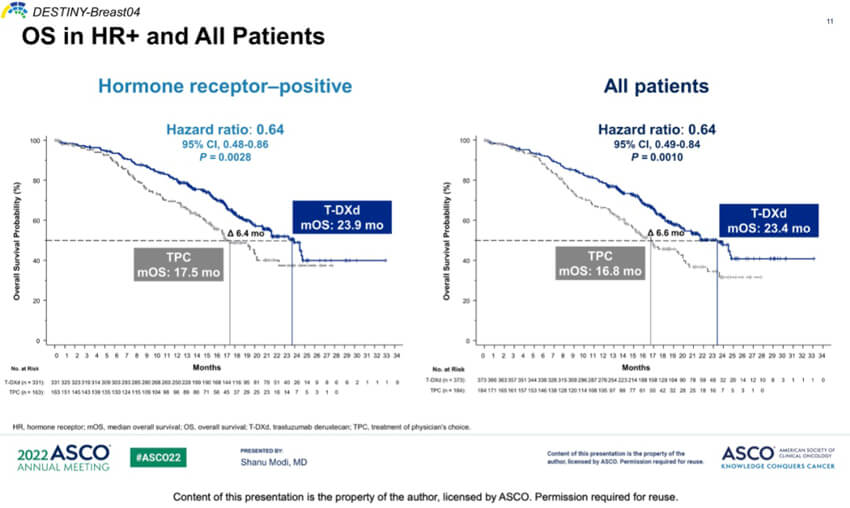 In addition, Enhertu has shown excellent efficacy in clinical studies in a variety of solid tumors, including lung and gastric cancers. On January 15, 2021, Enhertu was approved in the U.S. for the treatment of patients with previously treated HER2 positive advanced gastric cancer.

On August 12, 2022, the FDA announced the accelerated approval of an expanded indication for Enhertu for the treatment of patients with unresectable or metastatic non-small cell lung cancer (NSCLC) carrying an activating HER2 mutation. This is the first drug approved by the FDA for the treatment of HER2 mutated NSCLC. The accelerated approval is based on positive results from the multicenter, randomized, double-blind, dose-optimized DESTINY-Lung02 study. In the primary efficacy analysis cohort, which included 52 patients, Enhertu achieved a confirmed objective remission rate of 58% (ORR, 95% CI: 43, 71) with a median duration of remission of 8.7 months (DOR, 95% CI:7.1, not evaluable).

AstraZeneca's latest financial report shows that Enhertu sales reached USD 204 million in the first half of 2022, an increase of more than 2-fold compared to the same period in 2021. Undoubtedly, with the approval of new indications such as treatment of HER2 low expression breast cancer and HER2 mutated NSCLC, Enhertu will further broaden its application scope and expand its market scale. 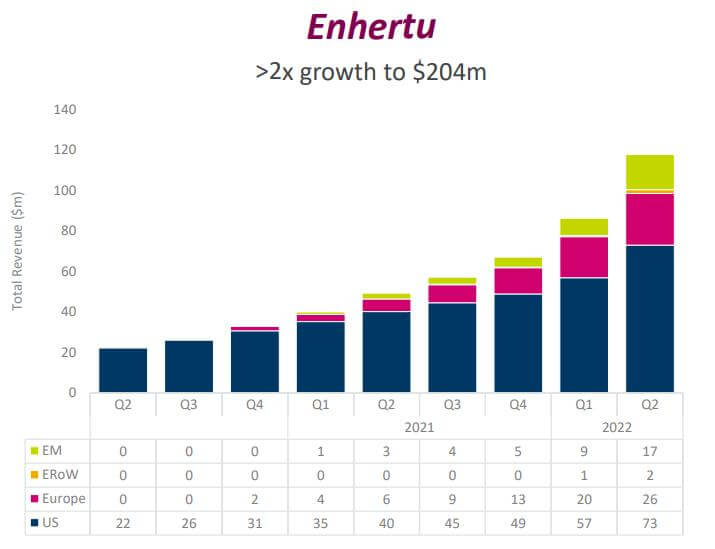 According to statistics, Enhertu's sales in the global region outside of Japan reached $397 million in the first half of 2022. In 2021, Enhertu's full-year sales were $426 million, up 123% year-over-year, and it is currently the third best-selling ADC drug. The top two are Roche's Kadcyla (trastuzumab emtansine) and Seagen's Adcetris (Brentuximab vedotin) with sales of $2.178 billion and $1.306 billion, respectively.

The clinical data of DS-8201 is exceptional. It is not only a highly effective bailout drug for HER2-targeted breast cancer patients, but also expands the benefit population of HER2-targeted therapy (from HER2-positive to low expression), and performs well in the treatment of lung, gastric and intestinal cancers, which is a new dawn for HER2 mutated tumor patients in the future.