Antibody-drug conjugate (ADC) research has been conducted for more than a century since Paul Ehrlich first introduced the concept of the "magic bullet" in 1913 for the use of antibodies to target diseases.

Payload is the key component of ADC to exert cytotoxic effects, which has to meet the following principal requirements: (1) highly cytotoxic, usually with the IC50 value at low nanomolar or picomolar level, (2) well-defined target and action mechanism, (3) (potential) chemical attachment site, (4) well solubility, (5) high stability during circulation, uptake, and release to the target.

ADCs Based on the Auristatins

In 1987, Pettit et al. first isolated dolastatin 10 from sea hare Dolabella auricularia featured by its ability to inhibit tubulin polymerization, binding at the vinca alkaloid sites in a noncompetitive manner. Monomethyl auristatin E (MMAE) and monomethyl auristatin F (MMAF) are identified as the best analogs of dolastatin 10, which bind to microtubules and prevent cell proliferation by inhibiting mitosis. Their molecules are highly stable and show no signs of degradation in plasma, liver lysosomal extracts or proteases such as cathepsin B. In some clinical trials in lymphoma, leukemia and solid tumors (e.g. lung, gastric, prostate, and breast cancer), MMAE & MMAF has also shown potent activity.

Both MMAE and MMAF are peptide analogs composed of five amino acids. MMAF differs from MMAE in that it has a charged (carboxyl) phenylalanine at the C-terminus, while MMAE is uncharged. The negatively charged carboxylic acid group hinders the diffusion of MMAF in the cell, making MMAF slightly less toxic than MMAE. The conformational relationships of dolastatin 10 analogs have been extensively studied, mainly focusing on the terminal subunits: P1 (carbon terminus) and P5 (nitrogen terminus), with the most common approach being the introduction of carbamate on P1.

Among the 14 marketed ADC drugs, there are six ADC drugs with payloads of MMAE or MMAF, including Adcetris, Polivy, Padcev, Blenrep, Tivdak, and Aidixi (RC48). Notably, at the beginning of 2022, the FDA granted breakthrough therapy designation to the novel ADC telisotuzumab vedotin based on the excellent data from its phase 2 LUMINOSITY study. 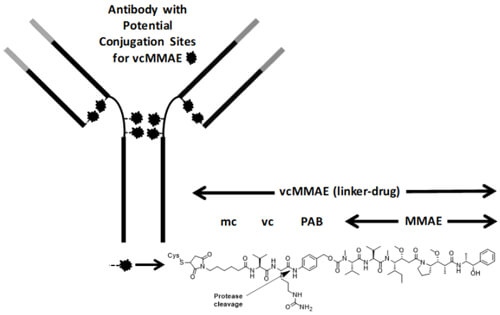 Enfortumab vedotin has a approximate molecular weight of 152 kDa, with an average of four MMAE molecules attached to each antibody molecule. 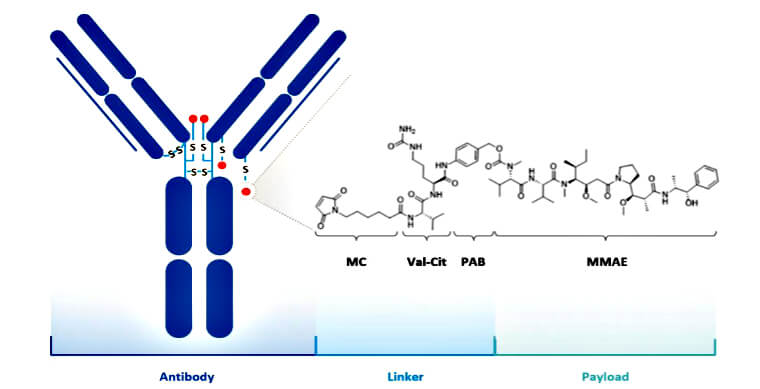 Related Articles:
Camptothecin & Its Derivatives for Cancer Therapy
How To Choose The Best ADC Linker?
ADC Drugs Global Sales of 2021 and Future Prospects
​The History Of ADC Drugs Development