Release date：2019/10/10 18:40:49
Assuming that polyethylene glycol (PEG)-conjugated or PEGylated proteins always offer outstanding physicochemical properties and pharmacokinetics profiles when compared to non-PEGylated ones, is not always accurate. PEGylation is one of the most common approaches utilized for a variety of enzymes and proteins to obtain an increased in vivo retention time, reduction in toxicity, antigenicity and immunogenicity. PEGylation has delivered sustained success of many therapeutic proteins, together with the number of protein conjugates entering clinical trials. But, it doesn't mean PEGylation is perfect, it also causes some side effects of which cannot be neglected, such as the antibody formation against PEG (anti-PEG), hypersensitivity to PEG and vacuolation. 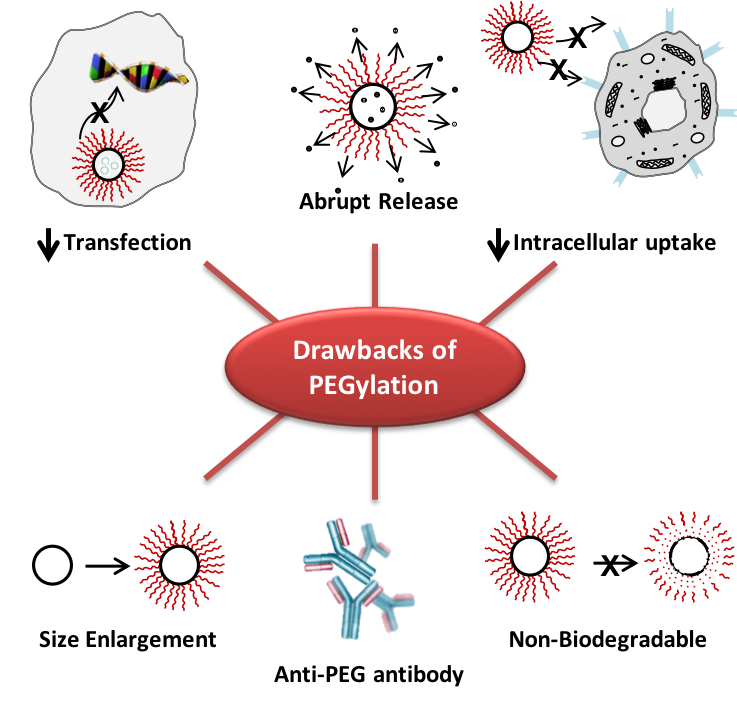 1. The Anti-PEG and Hypersensitivity to PEG

PEG, the long-believed polymer to be non-antigenic could develop an immune response resulting in ABC of PEG-modified materials. Where an anti-PEG antibody could be formed that results in the faster elimination of the second or further IV injected dose in animal studies and clinical settings. This has been clarified by the formation of immune complexes which can be rapidly bound and cleared by macrophages via Fc receptor-mediated phagocytosis.

In a study, a more severe adverse effect to the immunogenicity of PEG, hypersensitivity, has been observed clinically where three cases (0.002% of the treated patients with advanced coronary artery disease) administered a commercial PEG-containing contrast agent, SonoVue, developed life-threatening anaphylactic shock. Similarly, there are 7 cases of anaphylaxis to the PEG-containing sulphur hexafluoride that have been described in Europe, while none of these reactions have been reported in similar non-PEG-containing agents.

These cases highlight the consideration of hypersensitivity to PEG. PEGs are multivalent and potentially large enough to elicit an immune response without haptenation.

There are reports of increased vacuolation in tissues from animals administered PEGylated proteins. In 1998, Bendele et al. using Sprague-Dawley rats showed that PEG-tumor necrosis factor (TNF)-binding protein (bp) is potential to form vacuoles in the renal tubular epithelium. They found that TNF-bp conjugated to a larger PEG (PEG50K) produced less severe renal tubular vacuolation than TNF-bp conjugated to PEG20K. Not come singly but in pairs. Recently, Rudmann et al. reported that the vacuolation observed with unconjugated high molecular weight (HMW) PEGs are markedly influenced by the molecular weight of the PEG. The molecular weight of the PEG can impact the tissue distribution.  There are some marketed PEGylated drugs which could cause cytoplasmic vacuoles in cells.

Rudmann et al. indicated that PEG immunoreactivity was demonstrated in the cytoplasm of vacuolated cells by developing an Immunological Histological Chemistry (IHC) procedure. The vacuoles might include PEGs or the accumulation of PEGs results in the vacuolation. Although severe side effects of the accumulation have not been reported and PEG-associated vacuolization in vitro cells is without apparent toxicologic significance, consequences of life-long therapies with high dosages of PEG–protein conjugates containing PEG conjugates of high molecular weight are hardly predictable. Occasional warnings that significant PEG–protein accumulation in the liver may increase the risk of toxicity have appeared.

PEGylation is not a simple process: if you want to ensure its beneficial effect on the pharmacokinetic properties and biological activity of modified compounds, consideration should be given to certain important parameters, including the molecular weight and structure of PEG, the number of attached PEGs (monoPEGylated, diPEGylated, etc.) and the potential position of PEG attachment sites. There are a range of methods that can be used to address these issues, such as targeting specific amino acids through developments in PEG-coupling chemistries. However, the importance of non-specific coupling chemistries in current industrial processes and technologies poses a significant challenge to the study of heterogeneity in products resulting from this type of coupling reactions. And distinguishing different monoPEGylated isomers from each other is difficult, and some isomers can vary in biological activity, so it is a hard work to monitor or predict the mixture's properties.

4. Other Disadvantaged of PEGylation

PEGylation's effects on the PEGylated product's biological activity and bioavailability are checked by sources. PEG chains can surround the protein to shield it from the environment, but they also alter the protein's communication capabilities which lead to its biological function. It can also reduce the molecule's binding affinity and biological activity. Depending on the PEGylation process and the weight of bound PEG, operation in the PEGylated material may be very common, from 7% to 98%. Another unusual phenomenon for PEGylation has been observed: adding PEG has resulted in increased viscosity. Kerwin et al. demonstrated that the viscosity of a combination containing PEG and TNF receptor1 was five times higher than that of either PEG alone or TNF alone. PEG can be branched or single-chained. The latter increases the solubility of proteins, reduces viscosity and may increase the protein's half-life further, but it is more expensive. We can choose an appropriate type according to our purposes.

Promising applications of the PEGylated proteins and peptides have been found in biotechnological and biomedical fields due to the improved solubility, thermal and mechanical stability, reduced antigenicity and immunogenicity, enhanced circulating half-lives, optimized pharmacokinetic and pharmacodynamic properties. However, because of the existence of anti-PEG, vacuoles related to PEGs and other disadvantages, the extensive use of the PEGylation is limited in some extent. In the future, scientists need to explore new ways to solve these problems.

Biochempeg offers PEGylation as a cost-effective modification of proteins and peptides which has the potential to improve bioavailability compared to the unmodified molecule.