Advantages and Disadvantages of PEGylated Liposomes in Drug Delivery System

In 1961, Alec Bangham proposed the idea of using liposomes as drug delivery vehicles. In the early 1970s, liposomes were already an indispensable part of research and clinical applications in the field of nanomedicine. Liposomes are spherical, self-closed structures formed by one or more concentric lipid bilayers with an encapsulated aqueous phase in the center and between the bilayers composed of natural or synthetic lipids. Due to their size and hydrophobic and hydrophilic character(besides biocompatibility), liposomes are promising systems for drug delivery. 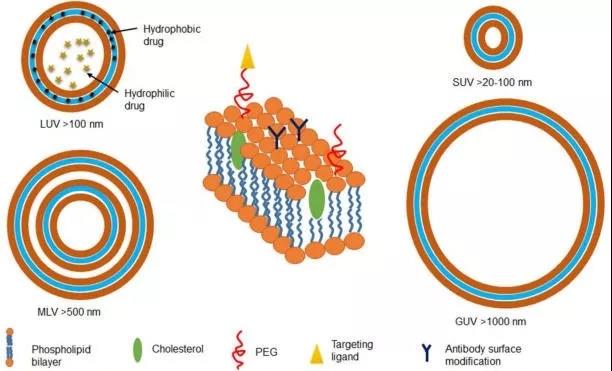 Liposomes modified with polyethylene glycol (PEG) can solve these drawbacks. After PEGylated, the hydrophilicity of the liposome surface increases, reducing its affinity with phagocytes, so it can escape the recognition of the reticuloendothelial system and reduce the capture of liposomes, so it is also called stealth liposomes. Stealth liposomes have many advantages,
1) It can reduce the occurrence of immunogenicity and antigenicity, which has a wide range of uses in the development of macromolecular drugs that are prone to immune reactions;
2) It also affects the physical and chemical properties of drugs nature. It can help reduce the liver clearance rate and prolong the half-life of the drug, thereby reducing the patient's dosage and frequency of use; at the same time, reduce the adverse reactions of the drug while ensuring the efficacy of the drug.

A well-known example of the application of this technology is Doxil®, which was developed by Sequus in the United States. It is the first liposome drug approved by the US FDA and the first nano drug. Doxil compared with Doxorubicin:
1) Doxil's drug distribution volume is much lower;
2) The clearance rate of Doxil is 0.1L / h, while Doxorubicin is 45L / h, so the half-life of Doxil is greatly extended;
3) Doxil has the isolation of the liposome shell, so doxorubicin is not easily absorbed by myocardial cells, thereby reducing cardiac toxicity.

There is another example of the application of PEGylated lipids. A PEGylated lipid is used as an excipient in both the Moderna vaccine and the Pfizer–BioNTech COVID-19 vaccine. Both RNA vaccines consist of Messenger RNA, or mRNA, encased in a bubble of oily molecules called lipids. Proprietary lipid technology is used for each. In both vaccines, the bubbles are coated with a stabilizing molecule of polyethylene glycol.

Although PEGylated liposomes show many advantages, with the deepening of research, PEGylation has caused corresponding problems:
1) The steric hindrance of PEG chain inhibits the uptake of liposomes by target cells;
2) PEG interferes with the "endosomal escape" of pH-sensitive liposomes (PSL) carried by the genes and protein drugs, resulting in the degradation and failure of such drugs in the lysosome;
3) Repeated injection of PEGylated liposomes in the same animal induces the phenomenon of "accelerated blood clearance" (ABC). This series of negative effects is called "PEG dilemma". The "PEG dilemma" has brought serious challenges to the development of PEGylated liposomes.