Release date：2020/6/4 11:07:10
Biotinylation, also known as biotin labeling, is the process of covalently attaching biotin to proteins, nucleic acids, or other molecules. Biotinylation is fast, specific, and due to the small size of biotin (MW=244.31 g/mol), it is unlikely to interfere with the natural function of the molecule. Biotin (Vitamin H) binds streptavidin and avidin with extremely high affinity, fast on-rate and high specificity, and these interactions are used in many fields of biotechnology to separate biotinylated molecules of interest. The combination of biotin with streptavidin and avidin is resistant to extreme heat, pH and proteolysis, which makes it possible to capture biotinylated molecules in various environments. Similarly, multiple biotin molecules can be conjugated  to the target protein, so that multiple streptavidin, avidin or neutral avidin protein molecules can be combined, and the sensitivity of detecting the target protein is improved. There are many biotinylation reagents that can utilize a variety of possible labeling methods. Due to the strong affinity between biotin and streptavidin, the purification of biotinylated proteins has been widely used to identify protein-protein interactions and post-translational events, such as ubiquitination in molecular biology. 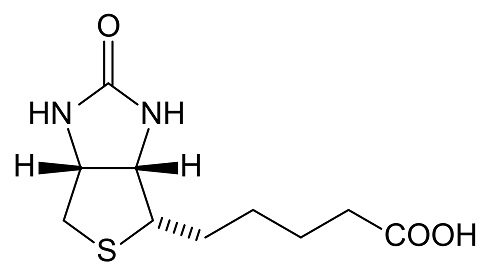 Chemical structure of biotin. Biotin also called vitamin H, vitamin B7 or vitamin B8 is a water-soluble B vitamin. The molecule has two rings (ureido and tetrahydrothiophene moieties) fused together via one of their sides. A coenzyme for carboxylase enzymes, biotin is required for the synthesis of fatty acids, isoleucine, and valine. Biotin is also involved in gluconeogenesis.

The solubility of biotinylated reagents greatly affects the ability to label target proteins or other macromolecules. Proteins have hydrophobic and hydrophilic regions based on amino acid side chains and protein conformation, and these regions can promote or limit biotinylation based on the solubility of the reagent. In addition, based on the solubility of the reagent, the hydrophobicity of the target protein microenvironment can prevent or allow biotinylation. For example, surface biotinylation is a common method for studying the expression or endosomal trafficking of surface molecules. It requires that the biotinylation reagent be hydrophilic to prevent it from passing through the hydrophobic cell membrane, thereby limiting the biotin labeling to the cell surface. Therefore, the choice of the appropriate biotinylation reagent depends on the target amino acid and the microenvironment of the protein or macromolecule.