Currently, ADC drug research has experienced a pile-up of targets, overlapping indication layouts and similar forms. There is an urgent need for a number of manufacturers to come up with new ideas to solve the existing problems. Some companies have taken an alternative route and laid out peptide-drug conjugate (PDC), which is relatively less competitive.

PDC (Peptide Drug Conjugate) is a new type of coupled drug, whose structure contains three main elements - a cytotoxic agent, a homing peptide and a linker between them. PDC delivers cytotoxins to diseased tissues in increased local concentrations and mitigates toxic effects in non-diseased tissues, thereby reducing adverse effects and achieving the scientific goal of potency and toxicity reduction.

Subtle changes to one or all of the three elements of the PDC structure will have a significant impact on the overall performance of the drug. During the design process, PDCs form new drug delivery vehicles capable of releasing active ingredients over time or by decomposition under a specific stimulus. It not only retains the advantages of conventional drug delivery, but also improves the permeation performance of oncology drugs and reduces liver and kidney toxicity. 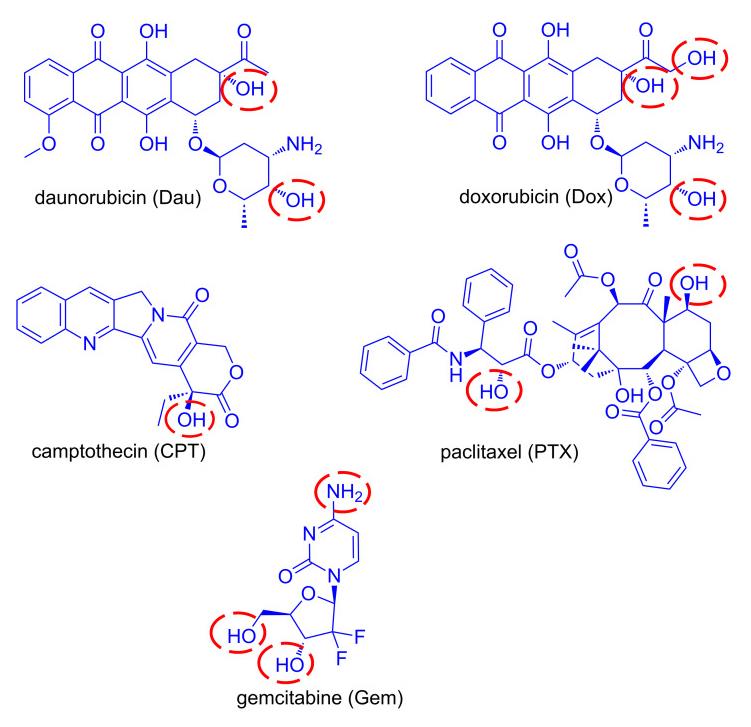 Representative examples of anticancer drugs utilized for the construction of PDCs. The most usual conjugation sites are marked with red cycles., image source: Reference [1]

The selection of linker is one of the key factors in the design of PDCs, which needs to take into account the microenvironment in which the PDC is located in order not to interfere with the binding affinity and drug efficacy of the peptide and its receptor. There are many different types of linkers used in PDCs according to their length, stability, release mechanism, functional groups, hydrophilicity/hydrophobicity and other characteristics. 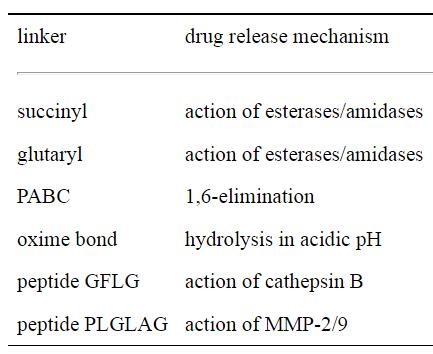 Representative examples of biodegradable/responsive linkers utilized for the formulation of PDCs in cancer. image source: reference [3]

There is an immense variety of peptides (linear or cyclic) that have been exploited as carriers/targeting elements to successfully deliver the cytotoxic warhead to cancer cells. These peptides are cell-specific and bind to certain receptors promoting their internalization. They are usually inserted into the cell via endocytosis and then they are transported to intracellular compartments with higher concentration of enzymes and lower values of pH, where they disassociate from the receptor and afterward from the anticancer agent. 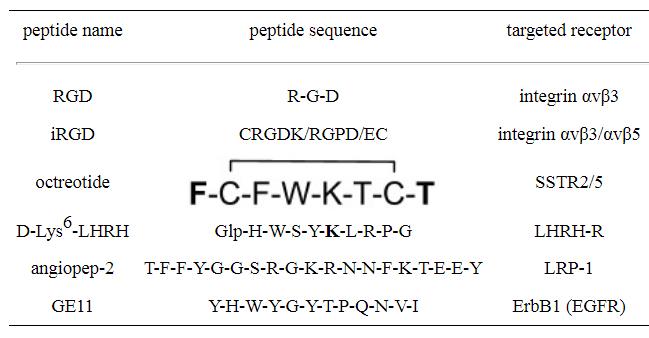 The most common peptides (linear and cyclic) utilized for the formulation of PDCs used in cancer. Image source: reference [3]

There are currently only two therapeutic PDC on the market, 177Lu-dotatate & Melflufen (PEPAXTO®), but many more are in various phases of the pipeline. 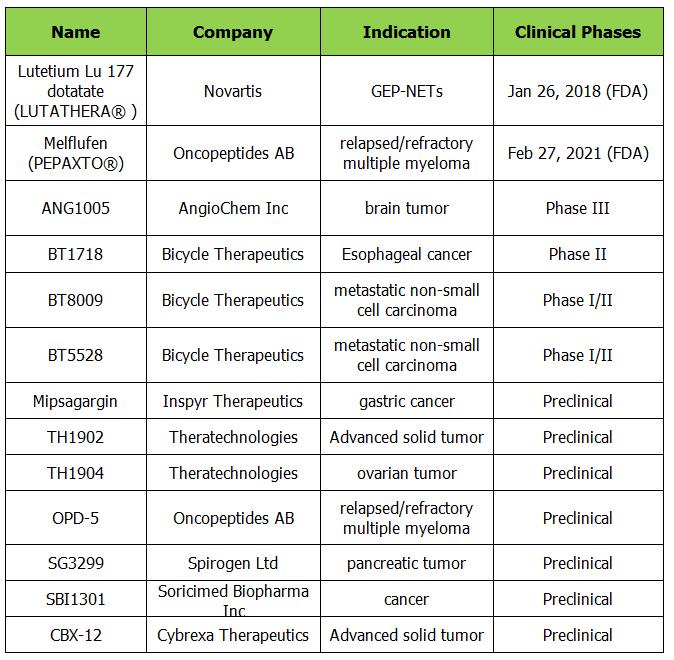 On January 26, 2018, the US Food and Drug Administration (FDA) approved Lutathera (lutetium Lu 177 dotatate; Advanced Accelerator Applications) injection, a radiolabeled somatostatin analog, for the treatment of adults with somatostatin receptor–positive GEP-NETs, including foregut, midgut, and hindgut NETs.  Somatostatin is the homing peptide, which is conjugated to a cytotoxic radiotherapeutic agent 177Lu through an amide linker.

PDC drug melflufen (PEPAXTO®) (temporarily withdrawn from the market), developed by Oncopeptides, received FDA approval for the indication of relapsed/refractory multiple myeloma (RRMM). Melflufen (melphalan flufenamide) is a first-in-class peptide–drug conjugate (PDC) that targets aminopeptidases and rapidly releases alkylating agents into tumor cells. Once inside the tumor cells, melflufen is hydrolyzed by peptidases to release alkylator molecules, which become entrapped. Melflufen showed anti-myeloma activity in myeloma cells that were resistant to bortezomib and the alkylator melphalan.

Preclinical data showed that MT1-MMP-expressing EBC-1 cells were killed by BT-1718 with an IC50 value of approximately 1 nM. BT-1718 has high affinity and excellent selectivity for binding to MT1-MMP via heme.BT-1718 showed tumor regression in a xenograft mouse model implanted with HT-1080 cells in different dosing regimens effect, with tumor clearance completed at 10 mg / kg for 23 days and no recurrence for 70 days.

Cybrexa Therapeutics, a research and development company focused on developing novel therapeutics through its alphalex PDC oncology targeting platform, announced on February 24 that it has entered into a collaborative research and development agreement with the National Cancer Institute (NCI), an agency of the National Institutes of Health, to conduct preclinical studies and potential clinical development of CBX-12 (alphalex™-exatecan), Cybrexa's lead therapeutic candidate.

As an effective alphalexTMPDC coupling, CBX-12 is a novel therapeutic approach for solid tumors. It includes a potent topoisomerase I inhibitor payload that enables antigen-independent overexpression of targeted tumor cells, which could greatly expand the patient population. on February 19, based on the positive results of the GLP toxicology study of CBX-12 and its outstanding performance in terms of mortality, clinical observations, weight, and feeding on therapeutic indices, Cybrexa submitted to the FDA IND application and expects to conduct a Phase I/I I clinical trial of CBX-12 against advanced solid tumors in 2021.

1. Stability. the biggest difference of PDC compared to ADC is its smaller molecular weight, which determines that PDC is more suitable for treating solid tumors than ADC. However, the small size of PDC (<5000 Da) leads to its easy renal clearance, poor stability and short half-life in vivo, resulting in its limited therapeutic effect on solid tumors. Chemical modifications can improve their efficacy such as peptide stapling and cyclization (Bicycle Therapeutics developed PDCs BT5528 and BT8009 for solid tumors using this approach), amino acid modification of peptide side chains (e.g. replacement of L-amino acids with D-amino acids), chemical modification of the peptide itself (e.g. PEGylation of the peptide chain or linking aliphatic chains), formulation optimization (e.g., use of permeation enhancers and acid-resistant coatings).

Polyethylene glycol (PEG) has been shown to be biocompatible in the body as it exhibits good solubility, limited toxicity and immunogenicity, flexible and low protein absorption. The incorporation of PEG in the dendrimer enhanced the PK properties of the dendrimer conjugate through the extension of the half-life. Biochempeg is dedicated to being your most reliable partner to provide a chemical synthesis and high-quality PEGylation services for the R&D of PDCs. We are committed to promoting the progress of your PDC discovery and development projects.

2. Targeting. An important reason for the rapid development of ADC drugs is the improvement of monoclonal antibody technology, which has enabled the improvement of the specificity of targeting tumors. And the rapid development of phage display technology has made it possible to screen peptides with high affinity for tumor-specific expression or highly expressed receptors, and the peptides are structurally simpler and less expensive to produce and identify than antibodies.