Interleukin-2 has a long history as a promising cancer therapy that can lead to complete and durable remission in patients with metastatic renal cell carcinoma and metastatic melanoma. High-dose IL-2 therapies, such as Aldesleukin, may result in durable clinical benefits in selected patients. However, due to its severe toxicity, patients need to be hospitalized in specialty centers. These have limited the use of Aldesleukin. By addressing the toxicity and half-life of interleukin-2, drug companies hope to establish a safer and more targeted immunotherapy for cancer or autoimmune diseases.

Interleukin-2 (IL-2) is a small 15.5-kDa four α-helical bundle cytokine that regulates the activity of white blood cells (leukocytes, often lymphocytes), which are responsible for immunity. IL-2 is part of the body's natural response to microbial infection, and in discriminating between foreign ("non-self") and "self". IL-2 mediates its effects by binding to IL-2 receptors, which are expressed by lymphocytes. The major sources of IL-2 are activated CD4+ T cells and activated CD8+ T cells

IL-2 receptor is composed of the three subunits IL-2Rα (CD25), IL-2Rβ (CD122), and IL-2Rγ (CD132). IL-2Rα is expressed on activated lymphocytes and binds IL-2 with low affinity (Kd~10-8M). IL-2Rβ and IL-2Rγ together form an IL-2Rβ/γC complex on memory T cells and NK cells that binds IL-2 with moderate affinity (Kd~10-9M), and this form is also functional to transduce the IL-2 signaling pathway. IL-2 binds with high affinity (Kd~10-11M) when all three receptors are co-expressed on activated T cells and Treg cells. There are two main problems faced for IL-2 receptor agonist development: 1) to stimulate the proliferation of only CD8+ T cells and NK cells but not regulatory T cells (Tregs), in other words, to bind specifically to βγ chains but not to α; 2) to solve the problems of poor interleukin stability, short half-life and high clearance rate.

By binding to different receptors, IL-2 is able to mediate downstream responses with opposite effects. When it binds to IL-2 receptors, which consist of βγ chains, it is able to activate CD8-positive T effector cells and natural killer (NK) cells, thus promoting an anti-cancer immune response. This is the reason why several biopharmaceutical companies have developed IL-2 signaling pathway agonists. However, IL-2 binding to receptors composed of αβγ chains leads to the proliferation of CD4-positive regulatory T cells (Treg), which may suppress the anti-cancer immune response. Moreover, this signaling pathway triggers the proliferation of eosinophils and causes potentially fatal pulmonary edema, hypotension and capillary leakage, which are major hurdles to overcome in the development of IL-2 signaling pathway agonists. 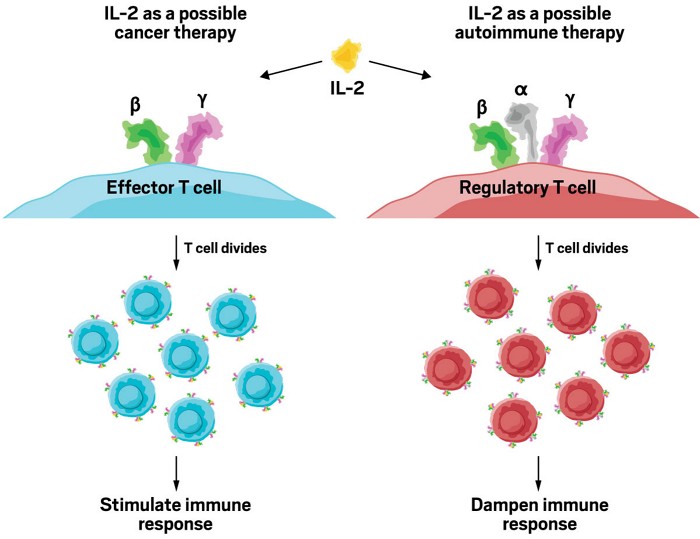 There are two main problems faced for IL-2 receptor agonist development: 1) to stimulate the proliferation of only CD8+ T cells and NK cells but not regulatory T cells (Tregs), in other words, to bind specifically to βγ chains but not to α; 2) to solve the problems of poor interleukin stability, short half-life and high clearance rate.

The Big Deal Around IL-2

Biotechnology firms based on interleukin-2 (IL-2) are launching, striking deals, and getting acquired. 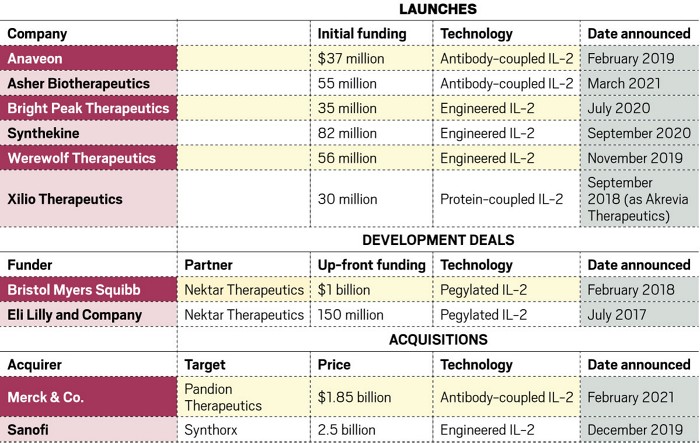 The IL-2 drug candidates under investigation are new proteins that do not exist in nature. Some are molecules similar to IL-2, but with amino acid changes that enhance some actions and weaken others. Others are IL-2 with antibodies and other chemicals attached that block some immune interactions and facilitate others.

All are trying to address the basic problems of therapeutic IL-2 - short half-life, requiring toxic dose levels; non-specific binding which hinders efficacy and causes side effects; and a tendency to stimulate antibody production that may compromise the efficacy of the drug or native IL-2.

Nektar Therapeutics is trying to keep IL-2 in the bloodstream longer so that they can reduce the high doses that cause toxicity and side effects. One strategy is to pegylate the molecule. Attaching polyethylene glycol (PEG) to specific points in the amino acid chain of IL-2 to give it a bigger construct and extend its half-life.

In September 2016, BMS and Nektar entered into a clinical collaboration to evaluate the Opdivo/bempeg (NKTR-214) combination therapy for the treatment of multiple cancer types.

In February 2018, they entered into another global strategic development and commercialization collaboration totaling up to $3.6 billion to develop NKTR-214 in combination with Opdivo and Opdivo+Yervoy in more than 20 indications across 9 tumor types, as well as combinations with other anti-cancer agents from 2 companies or third parties.

Nektar's lead IL-2 candidate, bempeg­aldesleukin, or bempeg, features six strands of PEG attached to lysines on aldesleukin, the active ingredient in Proleukin. The therapy is injectable and doesn’t become active until some of the PEG chains fall off, freeing up the part of the protein that binds preferentially to the β and γ pieces on cancer-killing effector T cells and NK cells. People with tumors who have been treated with bempeg have many effector T cells around their tumors and few regulatory cells.

For Sanofi, IL-2 immunotherapy dreams rest on the unnatural amino acid N6-[(2-azidoethoxy)carbonyl]-l-lysine, or azidolysine. The novel amino acid was developed by Synthorx cofounder Floyd Romesberg and engineered into an IL-2 candidate called THOR-707. On January 23, 2020, Sanofi completed the acquisition of Synthorx for $68 per share (a premium of approximately 172%) in a total transaction amount of approximately $2.5 billion. Sanofi now owns Synthorx and THOR-707. This unnatural lysine has a PEG attached to it that blocks the molecule from interacting with the α part of the IL-2 receptor. THOR-707 is in early trials in people with a wide range of tumors.

PEG can extend the half-life of drugs and improve their physicochemical properties through targeted modifications, which has great potential in areas such as oncology. Biochempeg provides PEG derivatives for PEGylated interleukins and a variety of supporting technical services. We will support you in all aspects of PEGylation from the laboratory R&D level to the scale up level.