Since the discovery of interferon by British and Swiss scientists in 1957, the mystery of interferon has been gradually unveiled. In 1966, scientists discovered the antiviral mechanism, immunomodulatory and antitumor effects of interferon; in 1977, interferon was used for the first time in the treatment of chronic hepatitis B with 2 out of 4 patients treated showing the disappearance of HBeAg. In 1986, the U.S. FDA officially approved interferon alpha for the treatment of malignancies and viral disorders, such as chronic hepatitis B and hairy cell leukemia, and later approved for chronic myelogenous leukemia (CML), follicular non-Hodgkin lymphoma (NHL), melanoma, and AIDS-related Kaposi's sarcoma.

Interferons (IFNs) are a group of signaling proteins secreted by host cells in response to the virus infection. The IFNs can be subdivided into three types (types I, II, and III) based on their different receptors. 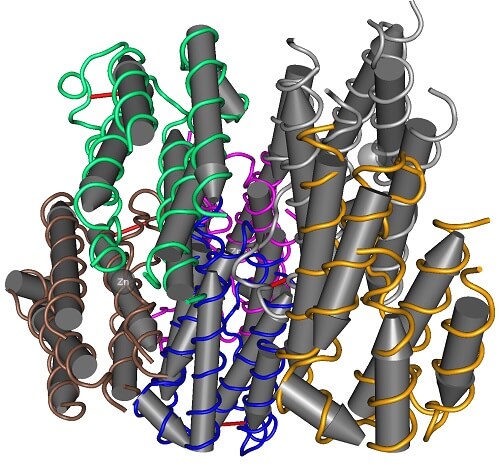 Type I IFNs: IFN-α, IFN-β, and more. They are mainly produced by fibroblasts and monocytes and have strong antiviral properties.

Type II IFN: IFN-γ, which is produced by T cells, and its immunomodulatory effect is stronger than its antiviral activity.

Type III IFNs: IFN-λ1, IFN-λ2, and IFN-λ3. Like type I IFNs, they also have antiviral and immunomodulatory functions, but their effects are different for the different receptors they used.

Interferon is a broad-spectrum antiviral agent that inhibits both RNA and DNA viruses. It does not directly kill or inhibit viruses, but rather blocks their multiplication by acting on cell surface receptors and causing the cells to produce antiviral proteins. Also, interferon can directly activate immune cells or indirectly inhibit the replication of viruses, and then inhibit the growth and multiplication of viruses during early viral infections in the body.

Multiple sclerosis is the most common immune-mediated disease affecting the central nervous system. IFN β-1b was approved by the US Food and Drug Administration in 1993 as the first disease mitigation therapy (DMT) for the treatment of multiple sclerosis (MS).

Interferons also have antibacterial, antiparasitic, and antifibrotic effects. The table below shows the approved therapeutic interferons in USA and EU.
Note, Besremi (ropeginterferon alfa-2b-njft), developed by Pharma Essentia and approved by FDA on 12 Nov, 2021, is not listed in the table.

Because of the short half-life of IFNs, their clinical application are limited, and only high and frequent doses can achieve the therapeutic effects required. The use of these drugs has also led to frequent adverse reactions. Therefore, the modification of recombinant human IFNs (rhIFNs) to optimize their pharmacokinetic properties has become a key way to maximize their efficacy while reducing their adverse effects. At present, the covalent binding of polyethylene glycol (PEG) to the protein is the most commonly used method to prolong the half-life of IFN in serum.

The PEGylation of IFN inhibits the decomposition of proteolytic breakdown and renal clearance, thereby prolonging its half-life, reducing the frequency of administration, and possibly having better tolerance and compliance.

PEGylated formulations improved the pharmacological properties of unmodified IFN, such as:
(i) improved IFN solubility and stability by reducing proteolytic degradation;
(ii) reduced renal clearance (e.g., by increasing its size above the renal cutoff of 40-50 kDa);
(iii) reduced plasma clearance (e.g. by reducing metabolic degradation and receptor-mediated uptake of the protein from the systemic circulation);
(iv) improving the safety profile of the protein by shielding it from antigenic and immunogenic epitopes;
(v) extending the circulation time from 5 to 90 hours, which is achieved by increasing its molecular size to the size required for half-life extension.
​A key advantage of using PEGylated interferon is that patients require fewer doses to maintain the necessary therapeutic levels in circulation (fewer doses administered), which is achieved by improving their pharmacokinetic profile and leads to a reduced frequency of side effects.

Biochempeg provides PEG derivatives for PEGylated interferon​ and a variety of supporting technical services. We will support you in all aspects of PEGylation from the laboratory R&D level to the scale-up level.