Folate Receptor alpha (FRα) is a glycosylphosphatidylinositol (GPI)-anchored membrane protein. It is an attractive therapeutic target for its overexpression in tumors such as ovarian, breast, and lung cancers

However, since its discovery in the 1990s,  only one FRα targeted drugs have been approved for the market. The small molecule drug conjugates and monoclonal antibodies developed by top pharmaceutical companies such as Merck and Eisai were all declared clinical failures and terminated. The successive failures cast a shadow over the FRα target, but its potential cannot be ignored.

Folate is one of the essential vitamins that the body needs for many processes, including DNA synthesis and repair and cell division. However, folate does not exist in the human body and the body requires the external intake of all the folate it needs. External intake of folate is mediated by folate receptors, which transport folate to the cytoplasm via endocytosis. Members of the folate receptor family are FRα, FRβ, FRγ and FRδ, of which FRα is the most promising receptor as a drug target. This is because, in addition to transporting folate, FRα is also an "accomplice" of cancer cells.

After folate is delivered into the cell, FRα translocates to the nucleus and acts as a transcription factor, binding to cis-regulatory elements responsible for regulating some key DNA for gene transcription and directly regulating the expression of key developmental genes in cancer cells. In addition, FRα also plays a role in the process of cancer cell proliferation and metastasis. On the one hand, FRα binding to folate initiates an intracellular regulatory signaling network that regulates phosphorylation of the non-receptor tyrosine kinase PEAK1 to promote activation of ERK and STAT3, both of which are signals that regulate cancer cell growth, development and division. On the other hand, folate receptors allow cancer cells to metastasize by downregulation of the cell-cell adhesion molecule, E-cadherin. 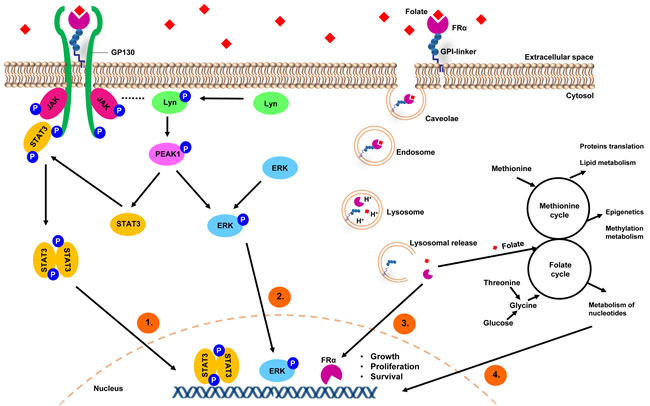 Reducing the adhesion and increasing the motility of cancer cells is the key to continuous metastasis, and the less E-cadherin, the better the cancer cell's mobility. Therefore, theoretically, the metastasis and invasion of tumors can be controlled by inhibiting FRα. More importantly, like other popular targets, FRα is also less expressed in normal tissues and overexpressed in tumor tissues. According to literature data in Oncotarget, the percentage of FRα overexpression in non-small cell lung cancer, mesothelioma, endometrial cancer, and epithelial ovarian cancer are about 14-74%, 72-100%, 20-50%, and 76-89%, respectively. 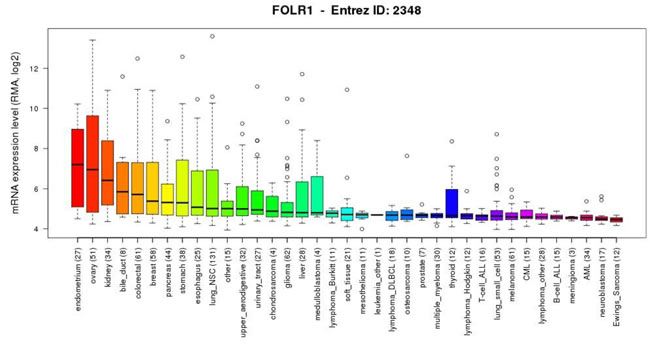 However, since its discovery in the 1990s, FRα has experienced numerous setbacks and remained unsuccessful, with the development of monoclonal antibodies and Small molecule drug conjugates faltering.

In 2014, Vintafolide, a small-molecule conjugate drug targeting FRα, failed again. Vintafolide is a Small molecule drug conjugate developed by Endocyte that targets FRα and increases tumor drug concentrations by internalizing folate binding to the receptor to treat ovarian cancer. Initially, Merck Sharp & Dohme had high hopes for Vintafolide and bought its rights from Endocyte with an upfront payment of $120 million and a milestone payment of up to $880 million. Vintafolide also had conditional approval from the European Medicines Agency, but ultimately failed because it did not meet the primary endpoint of progression-free survival.

ADC: The Rescuer of FRα Targets

After the failure of monoclonal antibodies and Small molecule drug conjugates, ADC drugs have started to come down to challenge FRα targets. As we all know, ADC drugs consist of three parts: antibody + toxin + linker, in which the antibody warhead plays the role of navigation to bring ADC to tumor cells at fixed points, while the toxin is responsible for killing tumor cells. The high expression of FRα in tumors and low expression in normal cells makes it exactly suitable as a warhead for ADC.

Following the breakthrough in the third generation of ADC drugs by drug companies represented by Daiichi Sankyo in 2018, ADC drug development has been gaining momentum day by day. For example, there are more and more targets, and in addition to heavy targets such as HER2 and Trop2, FRα has also joined the ADC drug development process. At present, there are only three FRα ADCs have entered clinical studies.

IMGN853 (mirvetuximab soravtansin) is currently the only FRα ADC drug approved by FDA. 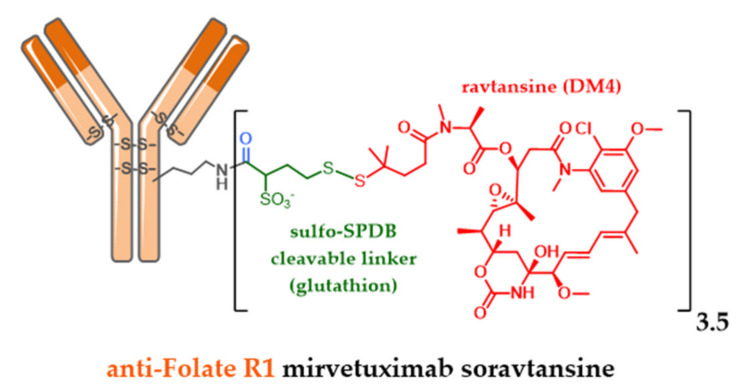 Fortunately, however, ImmunoGen found that in patients expressing moderate or high levels of FRα, patients in the IMGN853 group presented a higher ORR compared to chemotherapy (24% vs 10%). Together with the urgent need for new treatments for ovarian cancer patients who are currently platinum-resistant and post-bevacizumab treated, this became a breakthrough for IMGN853. After speaking with the FDA, ImmunoGen chose to turn around and conduct a clinical trial in patients with high FRα expression.

In a single-arm clinical trial called SORAYA (NCT04296890), IMGN853 monotherapy for platinum-resistant ovarian cancer with high FRα expression met the primary study endpoint with a confirmed ORR of 32.4% and a median duration of remission of 5.9 months, with 5 cases in complete remission.

Not surprisingly, IMGN853 will be the first FRα ADC to be successfully approved for marketing.

Eisai, perhaps seeing the potential of ADC drugs, did not abandon farletuzumab monoclonal antibody, but developed it as the warhead of ADC drug MORAb-202, and the toxin used Eribulin, which is connected by a cleavable linker between them. 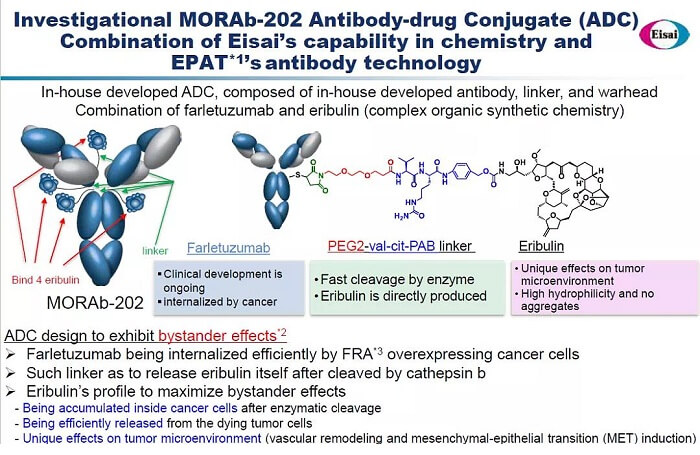 In June 2021, Bristol-Myers Squibb entered into a collaboration with Eisai for the development and commercialization of MORAb-202 for an initial payment of $650 million. Eisai is also entitled to receive up to $245 billion in potential milestones.

Prior to that, at the American Association for Cancer Research Annual Meeting, Eisai presented Phase I clinical data (NCT03386942，n=22) on MORAb-202 in the treatment of patients with FRα-positive advanced solid tumors, with an ORR (objective remission rate) of 45.5% in patients with advanced solid tumors, including one patient who achieved complete remission. Although no head-to-head trial was conducted, this data is initially better than ImmunoGen's IMGN853, which had an ORR of 22% in the Phase III clinical trial (FORWARD I，n=336).

STRO-002,  developed by Sutro Biopharma, was granted Fast Track designation by the FDA for ovarian cancer.

STRO-002 is currently in Phase I clinical studies in Europe and the United States for recurrent ovarian and endometrial cancers, with a dose creep study for recurrent ovarian cancer completed in August 2020. At the ASCO 2021 meeting, Sutro presented clinical data showing positive preliminary efficacy and good safety tolerability of STRO-002 in platinum-resistant/recurrent ovarian cancer that has recurred after multiple lines of therapy. Based on this data, Sutro intends to communicate with the FDA for accelerated marketing approval in the Phase II single-arm study as a registered clinical application.

In addition, Sutro plans to initiate a clinical study of STRO-002 in combination with bevacizumab for the treatment of recurrent ovarian cancer in the United States. Also, STRO-002 has the potential to be expanded to other oncology indications such as folate receptor alpha expression-positive triple-negative breast cancer and NSCLC, and Sutro said preclinical studies for NSCLC are also underway.

Notably, STRO-002 is the only product currently in clinical trials that do not differentiate between patients' FRα expression levels and is therefore expected to be the "best-in-class" product.

Biopharma PEG is dedicated to being your most reliable partner to provide chemical synthesis and high-quality PEG linkers for ADC drugs. We are committed to promoting the progress of your ADC discovery and development projects.