HER2 Targeted Therapies In Breast Cancer

From the sixteenth century to the end of the nineteenth century, major discoveries in the anatomy, biology, and epidemiology of tumors brought about a therapeutic revolution in medicine, surgery, and intervention, and drove advances in experimental oncology and radiation therapy.

If we look at the development of breast cancer therapies, we can find that the discovery of tumor drivers and their drug research process have revolutionized the treatment history. In particular, the discovery of HER2 and advances in anti-HER2 agents development has been one of the most meaningful advancements in the management of metastatic breast cancer, significantly improving survival outcomes. 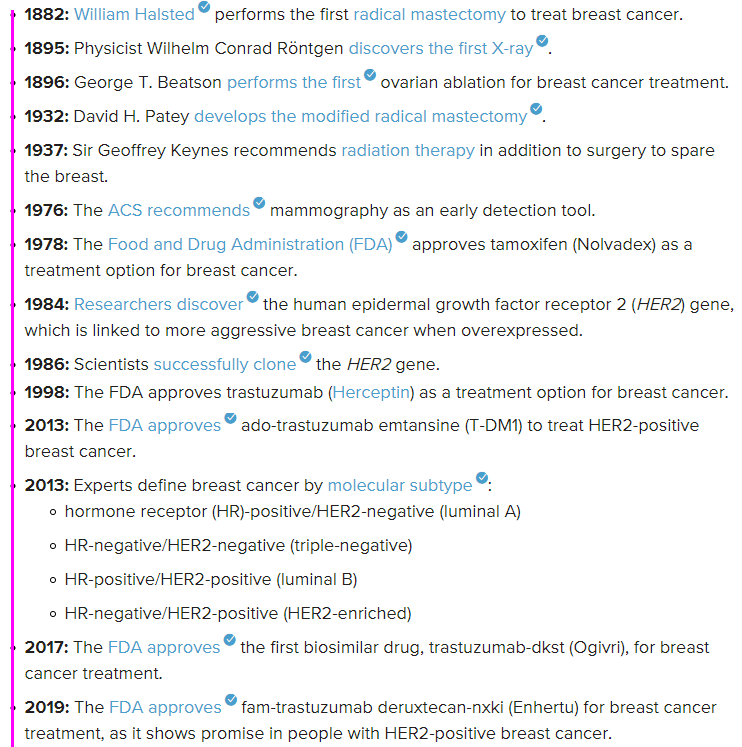 Here, let's introduce the discovery of HER2 target and the development ideas of its representative drugs.

The discovery of HER2

In 1984, Schechter et al. discovered a new oncogene in rat cells, which they called "neu", which corresponds to the human gene ErbB2 (HER2). HER2/ERBB2 is an oncogene located on the long arm of the chromosome and encodes a 185 kDa monomeric protein, also known as phosphoprotein 185 (p185 HER2/ERBB2). The HER2/ERBB2 protein is a receptor tyrosine kinase classified as a member of the epidermal growth factor receptor (EGFR) tyrosine kinase family based on significant homology to EGFR.

The HER protein family consists of four highly homologous protein members, EGFR (ERBB1/HER1), HER2 (ERBB2), HER3 (ERBB3) and HER4 (ERBB4), that control cell growth, survival, differentiation and migration. The HER2 ectodomain has no known ligands and is activated by forming homo- or heterodimers. Dimerization results in phosphorylation of tyrosine kinase residues in the cytoplasmic domain, which activate signaling pathways such as Phosphoinositide 3-kinases (PI3K) and  mitogen-activated protein kinases (MAPK), leading to cell cycle progression, cellular differentiation and proliferation. 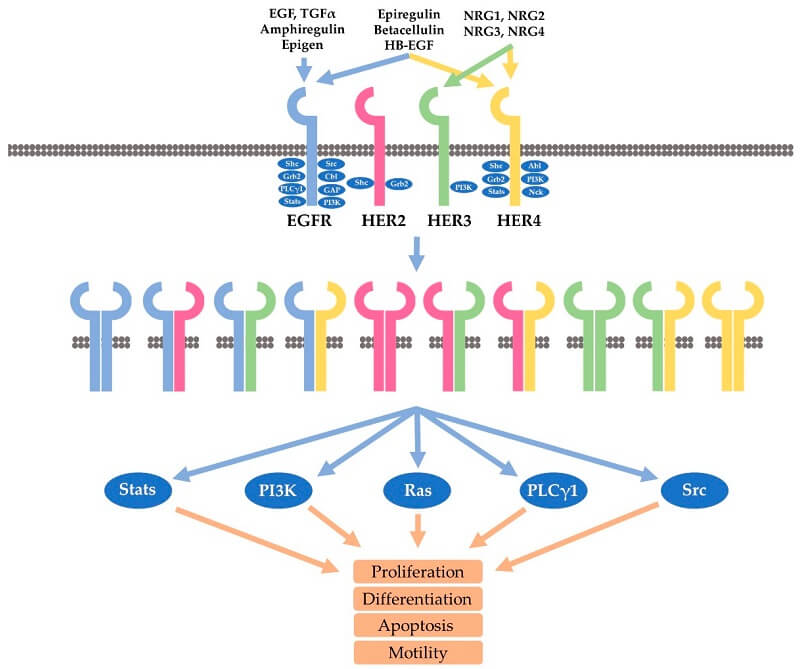 The activation of HER receptors and the downstream signaling cascades. Image Source: reference 2

In 1987, Aaronson et al. discovered that HER2 protein could cause normal cells to grow uncontrollably like invasive cancer cells. During the same period, Slamon also found amplification or overexpression of the erbB2 gene and corresponding high levels of HER2 products in a variety of human tumors. A novel mechanism for the oncogenic properties of the gene encoding growth factor receptor-like protein was demonstrated and provided a functional basis for the role of its overexpression in the development of human malignancies.

HER2 protein is currently found to be overexpressed in approximately 20-25% of breast cancers (termed HER2-positive breast cancers) and is associated with more aggressive disease and poor prognosis. In addition, HER2 overexpression, amplification and mutations have been identified in a variety of other solid tumors, including gastric and gastroesophageal junction (GEJ) cancers, biliary tract cancer (BTC), colorectal cancer (CRC), non-small cell lung cancer (NSCLC) and bladder cancer. 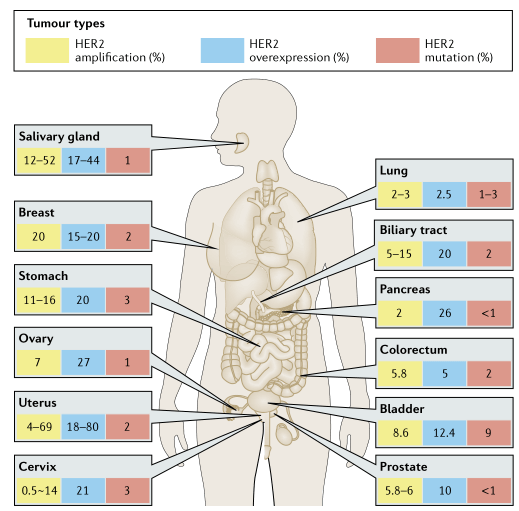 Trastuzumab, was the first HER2-targeted drug for breast cancer.  Based on this, two anti-HER2 ADCs have been developed and approved by the FDA for HER2-positive breast cancer, Ado-trastuzumab emtansine (Kadcyla) and trastuzumab deruxtecan (Enhertu).

Trastuzumab (Herceptin), introduced in 1998, was the first HER2-targeted drug to interfere with HER2 signaling through multiple mechanisms, including inhibition of dimerization, receptor internalization and/or degradation, and inhibition of the PI3K-AKT signaling pathway for antibody-dependent cellular cytotoxicity (ADCC), to achieve tumor growth inhibition.

In 2001, three years after the launch of trastuzumab, the FDA again approved trastuzumab in combination with chemotherapy for the first-line treatment of Her2-positive breast cancer patients who had not previously received chemotherapy. Since then, trastuzumab has not only been expanded to adjuvant therapy in breast cancer, significantly increasing the survival rate of Her2-positive breast cancer patients by more than 30%, but has also been further approved in gastric cancer treatment, expanding the treatment boundary.

Following the approval of trastuzumab, Genentech turned to the possibility of leveraging the targeted effects of trastuzumab to reduce the damage to healthy cells from chemotherapy. Antibody-coupled drugs (ADCs) were exactly what scientists had been exploring for decades at the time, but few had been able to successfully bring this therapeutic concept to life with a single drug.

Since then, Genentech have spent years searching for a combination of a linker and a chemotherapeutic toxin, with the expectation that this combination, after linking trastuzumab, would only break down when it entered the tumor cells, thus avoiding premature release of the cytotoxin.

Finally, Genentech and ImmunoGen collaborated to develop the first marketed HER2 ADC drug, Kadcyla, which delivers DM1, a microscopic protein inhibitor, to tumor cells through the targeted action of trastuzumab, releasing lysine (lys)-MCC-DM1 after antibody breakdown to inhibit microtubule assembly, leading to mitotic arrest and apoptosis for tumor killing. 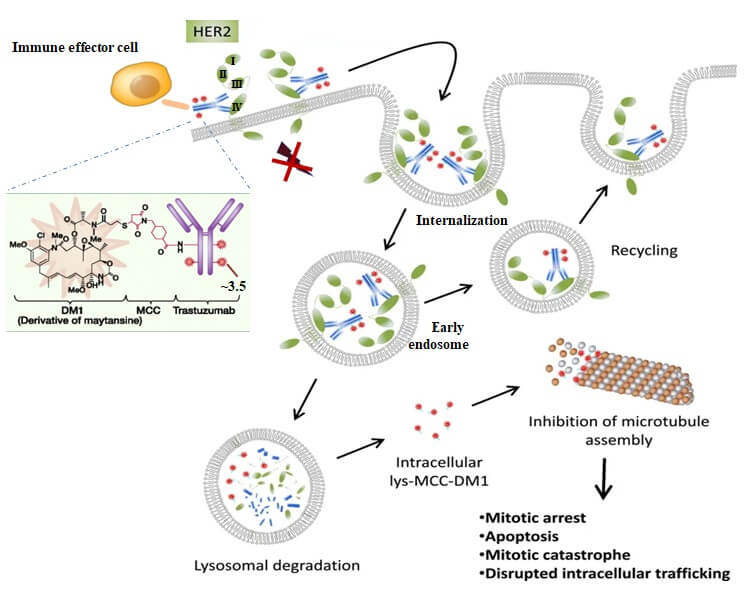 In clinical studies, Kadcyla has indeed also shown impressive results, once again achieving a breakthrough in the second-line treatment of Her2-positive breast cancer patients. The data showed (EMILIA study) that Kadcyla also significantly prolonged patient survival compared to lapatinib and capecitabine, with an mOS of 29.9 months and a 25% reduction in the risk of patient death.

Enhertu differs from Kadcyla by changing the toxin and the linker linked to trastuzumab. Enhertu uses a novel selectively cleavable linker that can be cleaved by a tumor-specific highly expressed protease and has blood circulation stability. Secondly, a more efficient novel topoisomerase I inhibitor was developed, which not only has high activity ( 10 times higher than SN-38) and short half-life, but also enables rapid elimination to achieve reduced toxic side effects. At the same time, the hydrophobicity of ADC was improved, and the high percentage of load carryover was enhanced, with a DAR of 8. 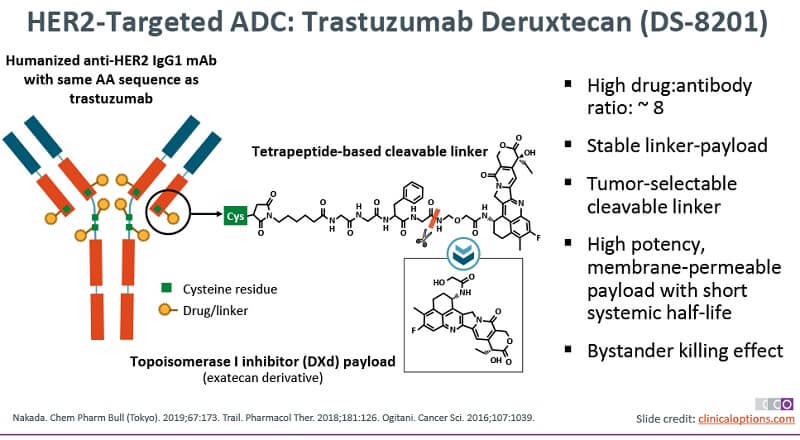 Enhertu was the first of numerous HER2 ADC drugs worldwide to be studied head-to-head with standard therapy Kadcyla (DESTINY-Breast03), and the BICR evaluation showed that patients treated with Enhertu had significantly longer PFS and a 72% lower risk of disease progression compared to Kadcyla. The investigator-assessed PFS in the Enhertu group reached 25.1 months, significantly reducing the risk of death by 44% compared to Kadcyla.

Based on data from the DESTINY-Breast03 study, the mOS of Enhertu is expected to surpass the 29.9 months of Kadcyla and may once again redefine the second-line treatment strategy for HER2-positive breast cancer patients. In addition, the clinical breakthrough of Enhertu does not end there, and the indication expansion continues, including different solid tumors or patient populations such as Her2 low expression breast cancer, gastric cancer and colon cancer.

In terms of small molecules, compared to antibodies and ADC drugs, it seems to be much bleak. Lapatinib, launched in 2007, is the first small molecule drug targeting Her2 and has also contributed to second-line HER2-positive breast cancer; however, it was unfortunately defeated by Kadcyla in a head-to-head study . On the contrary, tucatinib, riding on the ride of trastuzumab, has also found a place in HER2-positive breast cancer thanks to its central activity.

Overall, small molecule inhibitors do not have the same scenic view in Her2 as EGFR inhibitors have in lung cancer, although they are providing patients with alternative therapeutic options. In particular, the differentiated safety potential is expected to meet different clinical needs. The cardiotoxicity of trastuzumab is even more of a risk factor that has to be considered when receiving simultaneous anthracycline therapy. Patuximab, Kadcyla, and Enhertu have not been spared in terms of cardiotoxicity. Of course, Lapatinib is also a cause for concern for its hepatotoxicity, and the FDA has given a black box warning. In addition, Enhertu remains subject to concern for interstitial lung disease. It is these differences in safety that have led to different clinical treatment options.

With the advancement of scientific research and technology, novel drugs such as ADC, dual antibodies and CAR T with their own characteristics are still emerging. In the therapeutic field, beyond the dominant field of HER2-positive breast cancer, trastuzumab, Enhertu and vedicizumab have been licensed in gastric cancer and gastroesophageal junction cancer, and uroepithelial cancer has seemed to be in the bag of vedicizumab; mobocertinib, a dual-target inhibitor, has even filled the HER2 exon 20 small molecule treatment gap. It seems that the breakthroughs in drug research and clinical treatment in Her2 have not yet reached the boundary, and the breakthroughs and changes will continue to move forward.

It is known that the main directions in the development of new ADCs include new targeting antibodies, advanced linker technologies, as well as potent drug. Biopharma PEG offers a variety of PEG linkers to facilitate antibody-drug conjugate (ADC) development projects. All PEG linkers are of >95% purity and they are the basic building blocks for a successful ADC.