Release date：2020/2/19 10:11:25
Polyethylene glycol (PEG) is a polymer of ethylene glycol with a relative molecular weight of 200 to 8000 or above. It is composed of repeated oxyethyl groups, which not only has good water solubility but is also soluble in organic solvents such as benzene, acetonitrile, and ethanol. The characteristics of PEG molecules are as follows:

① Low dispersion: The dispersion with a relative molecular mass (Mr) of less than 5000 is 1.01, and the dispersion with a molecular weight (Mr) of more than 5000 is 1.1, with a wide distribution and greater selectivity;
② Unique amphiphilic: unique structure makes it soluble in both organic solvents and water;
③ Non-toxic: Studies show that polyethylene glycols greater than 1000 are non-toxic and have been used in various foods, cosmetics and drugs;
④ Biodegradable: Polyethylene glycol is directly eliminated in the body without any structural changes. Metabolites with a molecular weight of less than 20,000 can be metabolized by the kidneys, and larger molecules can be metabolized by the digestive system.

Most protein drugs, peptide drugs, and chemical drugs are accompanied by some problems that cannot be overcome by themselves, such as short period of action, large immunogenicity, and side effects. PEG is neutral, non-toxic, has unique physical and chemical properties and good biocompatibility, and is one of the few chemicals approved by the FDA for injectable drugs in vivo. Therefore, by connecting the activated polyethylene glycol to proteins, peptides, small molecule drugs and liposomes by chemical methods, that is, by performing PEGylation of the drug molecule, the biological half-life of the drug molecule can be effectively improved and its toxic side effects can be reduced. Among them, the most studied is the PEG modification of proteins. Compared with unmodified protein drugs, PEGylated protein drugs have the following advantages: 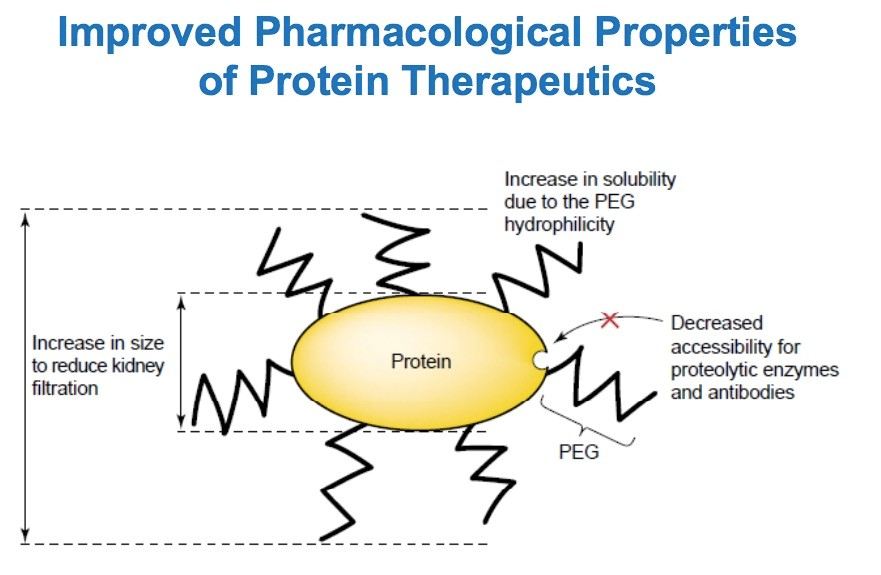 In view of the huge impact of PEGylation on drug properties, PEGylation has become an important way for drug development and improvement of the efficacy of already marketed drugs. So, how to carry out PEGylation becomes the top priority.

First, the appropriate PEG needs to be selected for molecular modification. The selection of modifiers mainly considers the following 5 aspects:

(1) carbonyl diimidazole method: This method was first used in the synthesis of polypeptides and has proven to be a good reagent for forming amide bonds.

Carbonyl diimidazole activation of PEG
(2) N-hydroxysuccinimide method: (a) Activate N, N-succinimide carbonate. This reaction needs to be performed under anhydrous conditions. (B) Activate succinic anhydride and N-hydroxysuccinimide. The polyethylene glycol obtained by this method has higher activity. It is best to perform protein coupling in a non-aqueous environment.

Finally, select the appropriate protein amino acid residue site or small molecule drug site for site-specific modification. The site-specific modification of suitable protein amino acid residues with activated PEG can improve the efficacy of natural proteins. The biggest problem in PEG modification technology of protein drugs is the inability to achieve site-specific modification, the modification products are not uniform, which brings great difficulty to isolation and purification, and also greatly hinders clinical application. According to the amino acid properties of proteins and the characteristics of PEG derivatives, when scientists use PEG to modify, they choose protein surface residues that do not bind to the receptor as modification sites. In this way, in addition to the excellent properties brought about by PEGylation, the modified protein drugs also have high biological activity. At present, the common modification sites in marketed drugs include amino, carboxyl, sulfo, disulfide, glycosyl, and some specific positions of non-polar amino acids.

The Future of PEGylation

At present, PEGylated drugs are mainly irreversible first-generation PEG-drug complexes and second-generation reversible PEG-drug complexes that are connected to the drug through a cleavable bond to exert a sustained release effect. Due to their non-biodegradability and limitation on molecular mass, the first-generation small molecule drug conjugates are not very satisfactory in improving their pharmacokinetics. Therefore, in addition to the peptide small molecule conjugate drugs that have undergone more research, Current research efforts have focused on the use of new biodegradable and spinal degradable water-soluble polymers. Degradable high-molecular-weight N- (2-hydroxymethyl) methacrylamide (HPMA) polymer small molecule drug conjugates show improved pharmacokinetics and pharmacodynamics, while showing ultimate renal clearance . Similarly, new water-soluble, biocompatible, and biodegradable polymers, such as polycarbonate, are also being synthesized and evaluated, expanding the range of polymers available for drug coupling. The future of PEGylation is geared towards the third generation of PEGylation, which aims to achieve the highest potency and extend the half-life of drug molecules, site-specificity, and low doses. This can be achieved by electrostatically linked non-covalent PEG modification. If successful, with the help of further research, PEGylation has the potential to become the main method of protein therapy.

Biochempeg can provide a variety of PEG linkers, which is convenient for pharmacists to carry out the next drug modification.