Blockbuster Drugs Approved by the FDA in August 2020 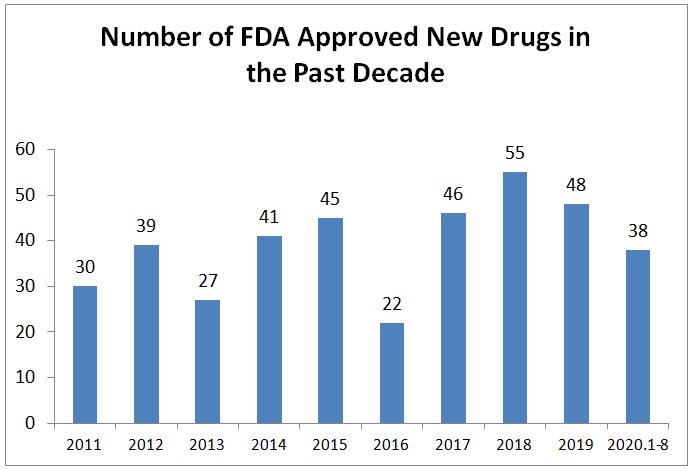 On August 5, GlaxoSmithKline announced that the US FDA has accelerated the approval of its Blenrep (belantamab mafodotin-blmf) as a monotherapy for the treatment of adult patients with relapsed or refractory multiple myeloma (MM). Receive at least 4 therapies (including anti-CD38 antibodies, proteasome inhibitors, immunomodulators). Prior to this, Blenrep has obtained the breakthrough therapy qualification granted by the FDA, and its new drug application has also obtained priority review qualification. Blenrep is the world's first approved anti-BCMA (B cell maturation antigen) antibody-drug conjugate (ADC), which has the potential to improve the treatment of today's patients with relapsed or refractory myeloma. Recently, Blenrep has also received conditional approval from the European Union for the treatment of patients with multiple myeloma.

Multiple myeloma is the most common type of malignant plasma cell disease, which is mainly characterized by uncontrolled proliferation and extensive infiltration of malignant plasma cells in the bone marrow. In the United States, it is estimated that more than 32,000 people have been diagnosed with multiple myeloma this year, and nearly 13,000 people will die from the disease. The safety and effectiveness of Blenrep have been verified in a phase II clinical trial called Dreamm. 196 eligible patients with multiple myeloma were randomly divided into two groups for treatment. The results showed that the overall response rate (ORR) of patients who received a single-agent Blenrep dose of 2.5 mg/kg every three weeks was 31%, and the median duration of response (DOR) had not yet been reached. However, among patients in remission, there were 73% of patients had DOR≥6 months.

Since the FDA successively approved 3 ADC drugs in 2019, ADC has fought a turnaround and has now become a popular research field in the world. So far, including belantamab mafodotin, 10 ADC drugs have been approved for marketing worldwide.

Biochempeg, a world-class R&D base for the development of PEG Derivatives. We offer the full range of PEG derivative development services and provide the most comprehensive media for conjugation research.

Spinal muscular atrophy (SMA) is a serious progressive neuromuscular genetic disease. Patients will experience severe muscle atrophy and other related complications. Risdiplam is the world's first oral drug to treat SMA. Roche has carried out 4 multi-center clinical studies on Risdiplam around the world and enrolled SMA patients with a wide range of ages, including SMA patients of different types.

Although Risdiplam is only the third commercialized SMA treatment product, it is currently the only oral treatment drug for SMA, which is priced at approximately US$340,000 per year, which is more affordable than the other two SMA treatment drugs that are on the market earlier.

Two other SMA treatment drugs that were marketed before Risdiplam were:

1) Spinraza of Biogen, approved in December 2016. Spinraza is administered intravenously and, like Risdiplam, can be used to treat SMA patients of any age. Spinraza's treatment costs are USD 750,000 for the first year, and USD 375,000 per year thereafter.

2) AveXis' gene therapy Zolgensma (trade name Spinraza) was approved in June 2019. Spinraza is the most expensive drug in pharmaceutical history so far, with a unit price of 2.1 million US dollars per tube (a single treatment cost, only one treatment is sufficient), and it is only used for the treatment of SMA patients under two years of age.