Current Nanomedicines for the Treatment of Cancer

In recent years, nanotechnology has been widely used in many therapeutic fields, especially in the field of oncology. The use of nanoparticles in oncology dramatically increases the safety and efficiency of the most common anticancer drugs. The main advantages of nanotechnology-based nanomedicine and delivery systems are effective targeting, delayed release, prolonged half-life and reduced systemic toxicity. Compared with the traditional delivery methods of these drugs, the use of nanotechnology has significantly improved the delivery of drugs to the target. 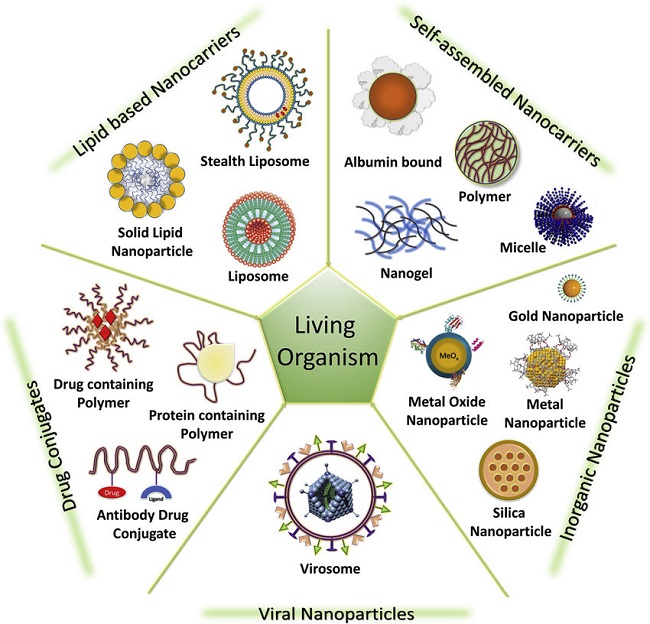 Since the FDA approved the first nanomedicine (Doxil) in 1995, more and more nanomedicines used to treat cancer have been approved for marketing worldwide. Among them, lipid nanoparticle preparations are the most widely used, and their effects are mainly based on vascular permeability and retention (EPR effect).

Currently, a large number of liposomal nanomedicines are in different stages of development, preclinical and clinical research. For example, García-Pinel et al. reported that there are more than 60 nanomedicines in different stages of clinical research. However, a small number of lipid nanoparticle-based preparations are allowed for clinical use. The following table counts the current nanomedicine approved in the field of cancer (Note: This table only lists nanomedicine for cancer treatment, and drugs for other indications are not included in this table).

Lipid nanoparticles, such as liposomes, solid lipid nanoparticles and nanolipid carriers, are currently the hotspot of research. These lipid nanoparticles can transport hydrophobic and hydrophilic molecules, exhibit very low or no toxicity, and extend the duration of the drug through a longer half-life and carry out the controlled release of the drug. Below we introduce several typical approved nanoliposome drugs.

Janssen's Doxil (pegylated doxorubicin liposome) is the first nano-drug approved by the FDA in 1995 for the treatment of metastatic ovarian cancer and Kaposi’s sarcoma. The drug is designed to balance the efficacy and toxicity of doxorubicin. Doxil's doxorubicin is encapsulated in polyethylene glycol (PEG) monolamellar liposomes with a particle size of 80-90 nm. This design can extend the time that the drug stays in the blood and encourage more drugs to reach the cancer cells. Doxorubicin causes serious problems due to its accumulated cardiotoxicity, and pegylated liposomal doxorubicin has fewer side effects than conventional doxorubicin. This result is achieved by distearoyl-phosphatidylethanolamine-PEG (DSPE-PEG), attached to phospholipid bilayers of hydrogenated soybean phosphatidylcholine and cholesterol.

Teva's Mvocet is a non-pegylated doxorubicin citrate liposome that can be used to treat metastatic breast cancer. The pharmacokinetic profile of Myocet is different from doxorubicin, which leads to an improvement in the therapeutic index (less cardiotoxicity and the same anti-tumor activity). It has been determined that the clearance rate of doxorubicin in breast cancer patients treated with Mvocet is 5-9 times lower. Its volume of distribution is about 10-25 times lower than that of patients receiving ordinary doxorubicin. At the same time, the half-life is 16 to 50 hours, which is significantly longer than the half-life of traditional doxorubicin. Although Myocet and Doxil contain the same drug in liposomes, they are different in lipid composition, size, loading method, different distribution characteristics in plasma and tissues, and different dosage and safety characteristics. Of course, these two drugs are not bioequivalent.

DepoCyt (Liposomal cytarabine) is a sustained-release liposome composition of cytarabine prepared by the sustained and controlled-release liposome platform "DepoFoam". Unlike conventional unilamellar or multilamellar liposomes, DepoFoam is a multivesicular system that contains hundreds of water-filled compartments separated by lipid bilayers. This nanostructure can encapsulate a large amount of drugs and can extend the release time of the drugs. The use of DepoCyt has been shown to delay the release of cytarabine for several days to weeks: the half-life exceeds 80 hours, compared to 4 hours for non-encapsulated cytarabine.

Marqibo is a vincristine sulfate liposome injection based on sphingomyelin and cholesterol, which aims to overcome the dosage and pharmacokinetic limitations of conventional vincristine. Prolonged exposure to vincristine cells will increase their cytotoxicity, because the longer the exposure time, the more cells will undergo mitosis, during which vincristine will show cytotoxic effects.

Generally, the research of nanomedicine for the treatment of cancer is an active development area of modern medicine. Extensive preclinical knowledge and clinical experience are being accumulated. Given their commitment to effectiveness and safety, the application of nanomedicine in diagnosis and treatment of oncology is likely to expand rapidly, which is likely to happen in the near future.

Biochempeg has been focusing on the development of a full range of medical applications and technologies for nanocarrier systems (including various types of nanoparticles, liposomes, micelles, etc.), and has accumulated a large number of data models and rich research experience in the construction and optimization of nanocarriers for gene vaccines and protein drugs.