How To Choose The Best ADC Linker?

The development of antibody-drug conjugates (ADCs) has significantly been advanced in the past decade due to improvements in payloads, linkers and conjugation methods. In particular, the linker design plays a key role in regulating the stability of ADC in the systemic circulation and the efficiency of payload release in tumors, thereby affecting the pharmacokinetics (PK), efficacy and toxicity characteristics of ADC.

Some key linker parameters, such as conjugation chemistry, linker length, and linker steric hindrance, will affect the PK and efficacy of ADC drugs. Therefore, in the design of ADC drugs, these important parameters of the linker must be adjusted correctly to achieve a balance between ADC stability and payload release efficiency, so as to achieve the expected effects of ADC drugs. 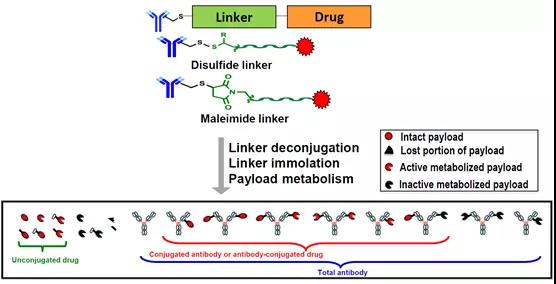 Ideally, ADCs want to remain intact and stable in the circulation before entering target cells. Many methods involving conjugation site selection and linker modification have been developed to enhance ADC stability. Generally, each component (including antibody, linker, and payload) can be modified for this purpose. However, studies have shown that adjusting the conjugation site, linker length, and linker steric hindrance is a more effective general method. 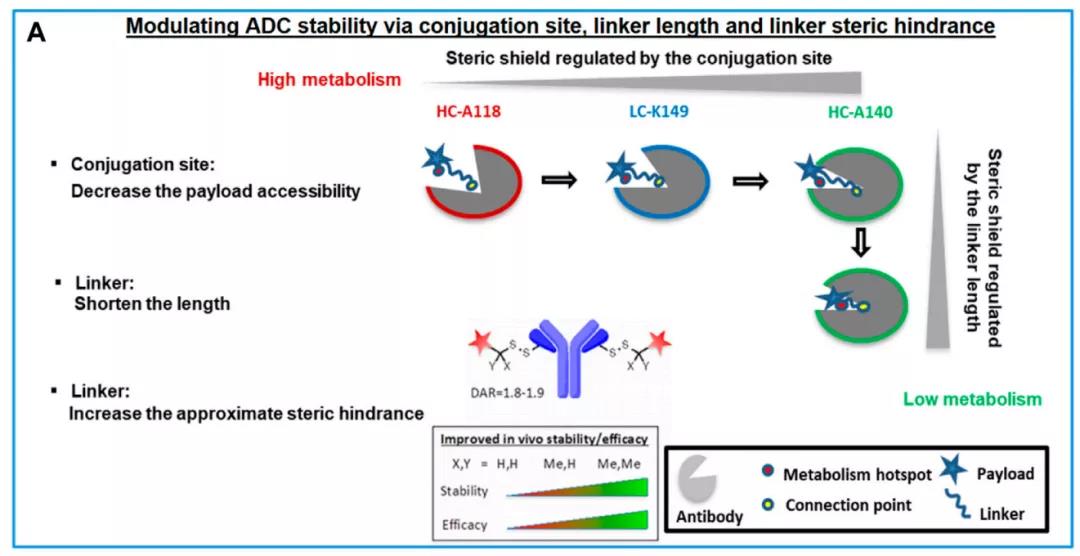 The spatial shielding provided by the antibody can be achieved by selecting more steric hindrance coupling or attachment sites.  On the other hand, it has been proved that the introduction of alternative chemical modification of proximal steric hindrance on the linker is an effective way to improve stability.  The spatial shielding provided by antibodies helps reduce linker deconjugation/cleavage and payload metabolism.  For example, sites HC-A118, LC-K149, and HC-A140 provide enhanced ADC stability and reduced fractional solvent accessibility (FSA), corresponding to the increased spatial shielding around the conjugation site.

On this basis, ADC stability can be adjusted through the effect of the distance between antibody and payload on spatial shielding by changing another major factor, namely the length of the linker. It was found that shorter linkers generally resulted in better ADC stability by further anchoring the payload within the spatial shield of the antibody compared to longer linkers.

In addition, conjugation chemistry is also an important factor affecting ADC stability. Maleimide and disulfide bond represent two main types of conjugation chemistry. Maleimide has been widely used as an antibody conjugation method and used with cleavable or non-cleavable linkers. Therefore, according to the mechanism of action of the payload, the pharmacologically active ingredient may be the payload itself or a payload with a partial or full-length linker. For cleavable or non-cleavable linkers, effective release of active ingredients can be achieved through optimal linker design. Disulfide bond-based antibody conjugation has recently been developed as a new strategy for generating cleavable linkers. For maleimide and disulfide bond cleavable linkers, the steric hindrance generated near the cleavage site is very critical, and the stability of the conjugate can be adjusted by chemical modification.

Payload release may be the rate-limiting step after ADC internalization into cells. For non-cleavable linons, antibodies are broken down or hydrolyzed by proteases into peptides or amino acids (AA) in the lysosome. In these cases, biologically active catabolic products are produced, where the payload retains a certain type of peptide or AA in its structure, and a transporter may be required for payload lysosome release. On the contrary, the cleavable linker is designed to self-degrade after the linking group is broken by enzymatic or chemical means to release the attached payload. Therefore, in these cases, the rate of payload release depends on linker cleavage and subsequent immobilization steps. 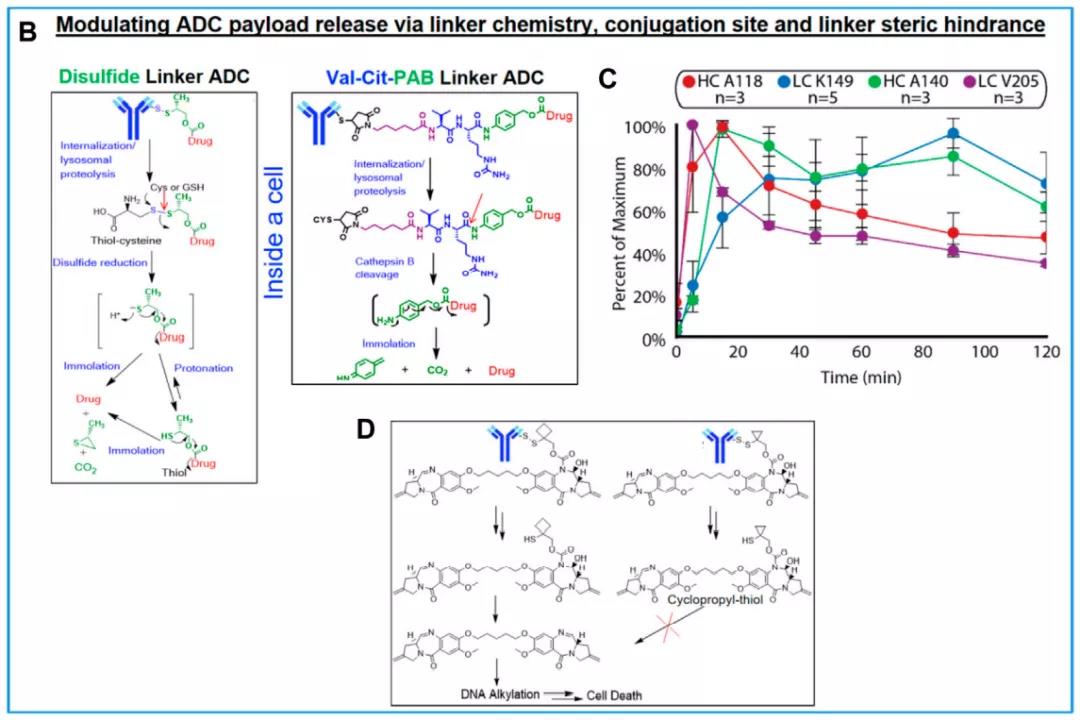 Under the same linker chemistry, the binding site will affect the kinetics of payload release. For example, for linkers connected to LC-V205, HC-A118, HC-A140 and LC-K149 sites, a series of fast to slow payload release kinetics was observed. In particular, the pyrrole [2,1-c] benzodiazepine dimer (PBD) payload release (15 minutes) at the HC-A118C site was faster than the LC-K149C site (60 minutes).

The binding site directly affects the release kinetics and has nothing to do with the monoclonal antibody. The introduction of sterically hindered chemical modification at the cleavage site can help improve ADC stability. In addition, steric hindrance may also cause slow or ineffective release of the payload. 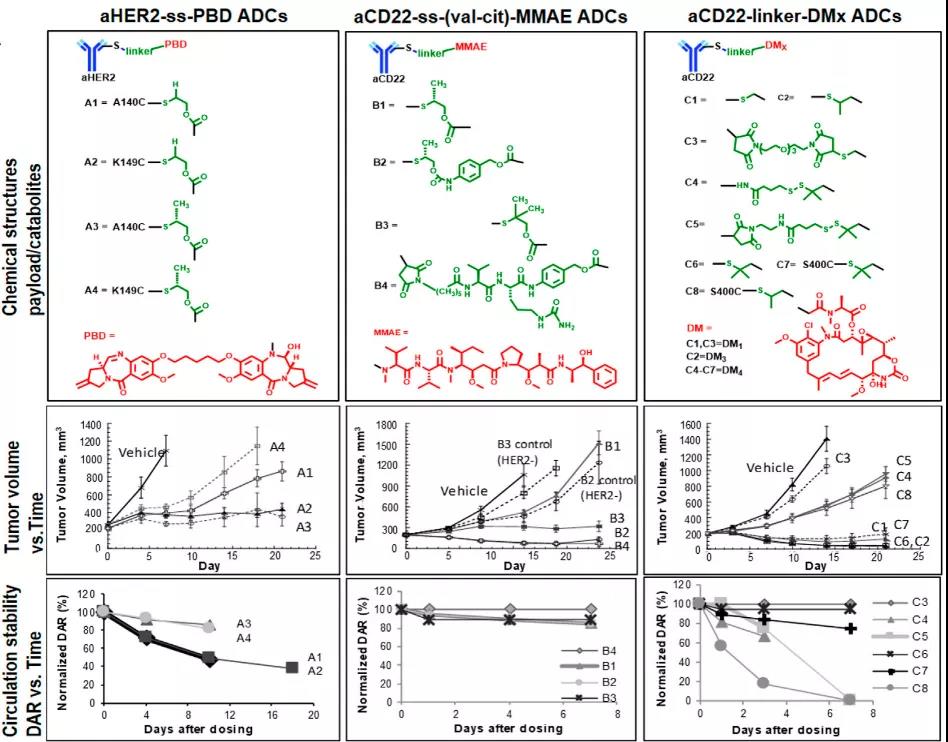 As shown in the figure above, the relative stability ranking is A1∼A2<A3∼A4 aHER2-ss-PBD TDC. In particular, compared with the H on both sides of the S-S disulfide bond, the enhanced steric hindrance of CH3 improves ADC stability: A1<A3 (LC-K149C), A2<A4 (HC-A140C). A4 is the most stable PBD-TDC, but it has the lowest activity in a mouse xenograft model. The overall efficacy ranking order is A4<A1<A3/A2. On the other hand, the ranking of PBD dimer concentrations released in tumors is roughly consistent with the observed efficacy trend (A4<A1<A3<A2).

In addition, at the same conjugation site LC-K149C, the TDC stability of aCD22 monomethyl auristatin E (MMAE) is similar between different linkers (S-S of B1-B3 and maleimide of B4). However, when B4/B2 reached 100% tumor growth inhibition (TGI), a significantly different activity was observed (B1<B3<B4/B2), which was similar to the concentration of MMAE released in the tumor (B1<B3<B4<B2) Unanimous.

Furthermore, a series of aCD22 ss maytansine (DMx) TDCs were tested, and the disulfide linkers were chemically modified at LC-K149C (C1-C6) and S400C (C7-C8) positions. The efficacy ranking (C3<C4/C5/C8<C1/C7/C2/C6) is consistent with the measured DMx concentration in the tumor (C3<C4/C5/C8<C1<C7<C2<C6), where C1/ C7/C2/C6 reach 100% TGI. Therefore, the final payload release is the sequential cumulative result of ADC cycle stability and payload release kinetics.

In the three groups of TDC analogs, despite the different intratumoral payload concentrations, complete TGI was observed in PBD-A3/A2, MMAE-B4/B2, DMx-C1/C7/C2/C6 TDC. Compared with the previous aHER2 MMAE TDC, the efficacy of TDC A-C has nothing to do with plasma stability, DAR or total antibody (Tab) exposure. The anti-tumor efficacy is related to the exposure of the payload within the tumor and has a "platform" effect. Therefore, it is very important to deliver payload to the tumor in a way that achieves the minimum threshold level required for the expected therapeutic effect.

Therefore, the design of the linker should be optimized to achieve a balance between ADC stability and payload release kinetics, so that the release of payload in tumor cells is higher than the therapeutic effect threshold. Tumor payload concentration assessment can be used to predict the efficacy of ADC in preclinical models.

Higher ADC doses do not always help improve efficacy, and once a critical threshold is reached, it may only increase potential toxicity. Therefore, it is necessary to integrate linker design and dose plan design to find the minimum effective dose.

For example, TDC AHER2-HC-A118C-ME-SS-PBD achieved complete TGI at 1×1mg/kg intravenous injection.  In MMTV-HER2/Fo5 mice, the 3×0.33 mg/kg (weekly) regimen over 3 weeks failed to achieve complete tumor suppression endpoint.  When tested in BJAB mice, TDC ACD22-LC-K149C-VC-Pabo-MMAE showed better activity at 1×1.5 mg/kg than at 3×0.5 mg/kg. Similarly, in The 1×3 mg/kg and 3×1 mg/kg doses showed similar effects when they lasted for more than 7 weeks.

In the other experiment, TDC ACD22-LC-K149C-MCC-DM1 was divided into 3 dose groups, using 3 dose regiments respectively:  1.5mg/kg total dose (3×0.5 mg/kg, 2×0.7mg/kg, 1×1.5 mg/kg), 3 mg/kg total dose (3×1 mg/kg, 2×1.5 mg/kg, 1×3 mg/kg), 6 mg/kg total dose (2×3 mg/kg,  2 x 3 mg/kg).  Although all doses showed some activity, the larger total daily dose group produced better tumor suppression.  In addition, in each dose group, a single dose showed the best efficacy, indicating the driving effect of payload Cmax on tumors.  In this case, a single dose can be used as a threshold dose for efficacy when complete TGI is achieved and tumor suppression is better than other corresponding fractional dose regiments.  In cases where the single-dose and multi-dose partial regiments produce similar efficacy, the minimum effective dose can be selected based on the principle of providing sufficient but not excessive payload to obtain the best efficacy curve and minimum toxicity.

The development of ADC has made rapid progress in the past ten years, and in order to obtain the best curative effect of the ADC, the method of linker integrated design should be considered. Important parameters that can be used include conjugation site, cconjugation chemistry, linker length, cleavable/non-cleavable linkage, and local linkage steric hindrance. The key point to be solved is to achieve a balance between ADC stability and payload release to obtain the best intratumor payload PK curve and efficacy. In addition, it is recommended that the integrated linker design be combined with the dosage design to find the best dosage regimen with ideal efficacy and minimal toxicity.