According to statistics from the World Health Organization (WHO), nearly 2 billion people are overweight or obese worldwide. From 1975 to 2016, the global obesity rate has nearly tripled. Every year, overweight or obesity causes 2.8 million deaths. Obese people not only have inconvenience and decreased exercise capacity, but also have an increased risk of developing type 2 diabetes (T2D) and cardiovascular disease (CVD), as well as death from cancers of the esophagus, colorectal, liver, gallbladder, pancreas and kidney.  It is estimated that 4-9% of cancer diagnoses are due to excess body fat, and obesity is associated with a poorer prognosis for a variety of malignant diseases.

More and more people realize that obesity is a chronic degenerative disease. Due to the limited efficacy of lifestyle and behavior interventions, it is necessary to upgrade obesity treatment strategies by adding drugs and/or surgical interventions. Bariatric surgery is the most effective way to lose weight. Nevertheless, surgical intervention cannot meet the extent of global medical needs.

Developing anti-obesity medications (AOM) is challenging for both technical and social reasons.  In the past, there have been a series of AOM-induced problems after regulatory approval.  Most of these are associated with adverse cardiovascular reactions (Sibutramine, Fenfluramine, Dexfenfluramine, Rainbow pills), increased risk of suicide (rimonabant), or increased drug dependence and abuse (methamphetamine).

Until recently, the latest clinical trials of GLP1R agonist drugs are making people believe that breakthrough drug-based obesity treatments can be achieved.

On June 4, 2021, the U.S. FDA approved Novo Nordisk's semaglutide as an anti-obesity drug under the trade name wegovy. Semaglutide has an outstanding weight-loss effect. It is the first time that a drug has been used to achieve weight loss that was previously only possible with surgery. 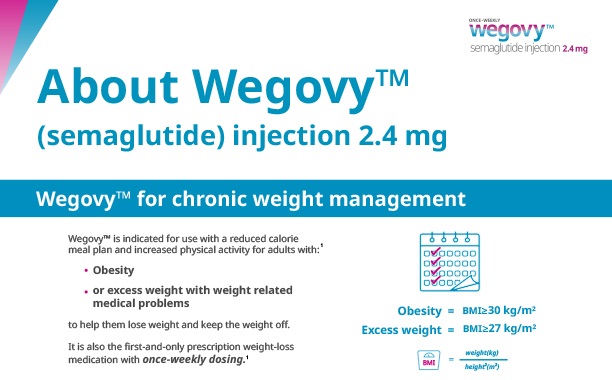 The drug was originally used to treat diabetes. It is a structural analogue of human glucagon-like peptide 1 (GLP-1), which can mimic its effect, reduce hunger, reduce diet, and reduce calorie intake. Therefore, the effect is outstanding in terms of weight loss. Phase 3 clinical trial results showed that participants lost an average of 15.3 kg.

Previously, another GLP1R agonist, liraglutide, was approved by the FDA for the treatment of adult obesity in 2014.

The history of anti-obesity medications

The anti-obesity medications has a long and tortuous history. In the last century, drug treatments for obesity included amphetamine, thyroid hormone, dinitrophenol, and various drug combinations. Due to serious side effects, these drugs were revoked shortly after regulatory approval.

The early development of AOMs has some obvious problems, but the recently approved obesity drugs have improved a lot. Orlistat, naltrexone/bupropion, liraglutide and Semalutide have all been approved. Bupropion is a reuptake inhibitor of dopamine and norepinephrine. Although the opioid receptor antagonist naltrexone does not cause weight loss in monotherapy, it reduces food intake when used in combination with Bupropion.

In 2014, Liraglutide 3mg became the first GLP1-based AOM to enter the market. Semalutide 2.4mg, recently approved by the FDA, reduced average body weight by about 15% after 68 weeks of treatment (compared to about 2.4% in the placebo group). Although there are typical GLP1-related adverse reactions, the drug is generally well tolerated.

At present, some emerging therapeutic targets have attracted the attention of the scientific community. These novel drug candidates represent the latest advances in human obesity treatment research.

The mechanism of action of GLP-1 agonists for weight loss is multi-factorial, and the improvement of intestinal, brain and systemic insulin sensitivity all contribute to the efficacy.

At the end of 2014, liraglutide 3mg became the first GLP1R agonist approved for the treatment of obesity, which is approximately twice the highest dose used in T2D therapy. After 1 year of treatment, subjects taking liraglutide lost an average of 8% in weight, while the control group lost an average of 2.6% in weight. Weight loss is related to improvements in insulin sensitivity, circulating lipids, and blood pressure. These results confirm that GLP1R agonists can be used to improve the metabolism of obese patients, reduce weight moderately, and reduce cardiovascular disease risk at the same time.

Semaglutide was approved in June 2021 for the treatment of obese or overweight adults. In a 1-year phase II study, the daily dose was about 10% of the high-dose liraglutide, and the weight loss was about twice the original. In a recent phase III clinical trial for overweight patients without diabetes, using Semalutide 2.4mg once a week, after 68 weeks of treatment, the body weight decreased by 14.9%, compared with 2.4% in the control group.

The use of GIPR agonists in the treatment of obesity and T2D is questionable because of the weakened insulin effect of GIP in T2D patients. In addition, clear preclinical evidence suggests that GIPR antagonism can improve systemic energy and glucose metabolism, possibly by improving central leptin sensitivity. However, long-acting (acyl) GIPR agonists reduced the body weight in obese wild-type and GLP1R knockout mice, and GIP affected body weight through the GIPR signaling pathway in the central nervous system.

In 1994, people discovered leptin. The loss of leptin can cause severe metabolic disorders, including extreme bulimia and lipodystrophy. However, although leptin supplementation is effective for patients with congenital leptin deficiency, leptin has little effect on weight reduction. Therefore, leptin as an independent therapy to treat obesity does not seem promising, but its combined use with pramlintide can reduce the weight of overweight people more than the treatment of two drugs alone.

In the past 30 years, a series of MC4R agonists have been developed, but MC4R agonists that were discontinued in clinical trials due to poor efficacy or adverse reactions include LY2112688 (Eli Lilly), MC4-NN-0453 ( Novo Nordisk), MK-0493 (Merck) and AZD2820 (AstraZeneca). In contrast, setmelanotide is a structurally related MC4R agonist, and setmelanotide was well tolerated in phase III clinical trials without any major adverse reactions. The FDA approved setmelanotide in November 2020 for the treatment of obese patients with deficiencies in POMC, PCSK1, or LEPR.

Figure 6: Effects of AOMs on weight loss in humans and rodents.

Amylin (also known as IAPP) is a peptide co-secreted with insulin to reduce food intake through the central control of satiety. Pramlintide is a synthetic analogue based on rat amylin. The FDA has approved pramlintide for use in patients with T1D and T2D. Importantly, the effect of pramlintide on reducing food intake and body weight is not limited to patients with impaired glucose metabolism. Therefore, other amylin analogs with improved pharmacokinetics are also considered as anti-obesity drugs.

BAM15 is a novel mitochondria-specific protonophore uncoupler that demonstrates similar potency to DNP to increase energy expenditure. BAM15 is an oral drug that can increase nutrient oxidation and reduce body fat without changing food intake. It has been reported that mice treated with BAM15 are resistant to weight gain. BAM15 can improve the insulin sensitivity in multiple tissues. It can enhance mitochondrial respiration by continuously activating AMPK in vitro, improve insulin action and stimulate nutrient intake. These results collectively indicate that mitochondrial uncoupling with BAM15 has a powerful anti-obesity and insulin sensitization effect without affecting food intake.

Macrophage inhibitory cytokine 1 (MIC1; also known as GDF15) continues to receive attention as a target for obesity treatment. GDF15 is a divergent member of the transforming growth factor-β (TGFβ) superfamily. Physiologically, GDF15 is expressed in many tissues at a low concentration, but increases in expression with tissue damage, cancer, metabolic diseases, CVD and inflammation.

Exogenous administration of rDNA-derived GDF15 and its analogs can reduce the body weight of diet-induced obese mice and non-human primates, indicating that it has a stabilizing effect in energy homeostasis. Although the effects have been seen in animal models, only human studies can determine whether GDF15 analogs are effective and safe for weight loss.

Peptide tyrosine tyrosine (PYY) is a member of the NPY family, and is co-secreted from the intestinal L cells as PYY1-36, along with GLP-1. After being released, PYY1-36 is rapidly cleaved by DPP-IV to its main active form PYY3-36, a high-affinity agonist of NPY receptor type 2 (Y2R).

The ability of PYY3-36 to reduce food intake in rodents and humans has stimulated the development of PYY3-36 analogs to treat obesity. Several long-acting PYY analogs (NN9748 and NNC0165-1875) have completed the first phase of obesity treatment trials, and NNC0165-1875 is currently undergoing a second phase of joint research with Semalutide. In addition, Eli Lilly announced a phase I trial using PYY analogs to treat T2D.

The anti-obesity medications has a long history and the road is very tortuous. Obese patients are often at high risk of vascular diseases and suffer from complications, which complicate drug safety evaluation. In the future, a more comprehensive characterization of patients will help provide direction for the advancement of the next generation of AOM. Ongoing clinical research will determine whether the drug treatment of obesity can achieve the same curative effect as bariatric surgery. The many prospects currently being shown indicate that it is very possible to achieve this great goal.

As a professional PEG supplier, Biopharma PEG specializes in providing customers with the PEG derivatives products and services required for the research and development of small molecule drugs. It will fully support customers worldwide from laboratory research and development to large-scale production level. We provide semaglutide key intermediates with high quality and best price.