Drugs targeting HER2 have shown excellent clinical efficacy in the development of more than two decades, achieving one milestone after another in the field of cancer. In view of this target, this article mainly introduces the development history of HER2-target drugs and the latest clinical breakthrough drug Detrastuzumab.

Introduction of HER2 Targets

There are four members of the HER receptor family. They are epidermal growth factor (EGF) receptors (EGFR/HER1/ErbB1, HER2/ErbB2, HER3/ErbB3 and HER4/ErbB4 [1, 2].

Activation of the epidermal growth factor receptor (EGFR) family of transmembrane receptor tyrosine kinases can regulate signaling pathways for cell proliferation and survival. HER2 is a non-ligand-binding member of this family and exerts its activity through heterodimerization with other EGFR family members. Activation of HER2 function can promote tumorigenesis, so scientists have started HER2-targeted drugs in HER2 gene-related cancer research [3]. The oncogenic potential of human epidermal growth factor receptor 2 (HER2) has been demonstrated and is highly expressed in a variety of cancers.

Around 1984, a team of scientists discovered a gene similar to the human epidermal growth factor receptor HER and named it HER2. Ulrich, a German researcher at Genentech, mentioned this target at a conference in 1986. Among all four HER family proteins, HER2 has the strongest catalytic kinase activity and functions as the most active signaling complex in the HER family after dimerization with other HER family members.

Figure 1 Activation of HER receptors and downstream signaling pathways

HER2 exon 20 mutations also include point mutations, such as L755S and G776C (8% to 10%). Less common mutations affecting transmembrane and parafembrane domains (G660D, R678Q, E693K, and Q709L) have recently been reported. HER2 mutations and other oncogenic drivers, such as EGFR, KRAS, NRAS, ALK, PI3KCA, and BRAF, have previously been shown to be mutually exclusive. [5]

Figure 2 Main mutation sites of HER2

At present, HER2 can be detected in breast cancer, gastric cancer, esophageal cancer, cholangiocarcinoma, lung cancer and other cancer types. The detection rate of HER2 high expression is about 2.5% in lung cancer, 15%-25% in breast cancer, 20% in gastric cancer, 20% in cholangiocarcinoma, 27% in ovarian cancer, and 18%-80% in endometrial cancer [6]. It can be seen that the continuous drug development for HER2 has brought great hope to the conquest of tumors.

Trastuzumab (Herceptin), the first HER2-targeted mab on the market since 1998, has not only changed the treatment landscape for patients with HER2-positive breast cancer, but also promoted clinical revolution. However, since some of the patients on the drug would develop resistance or relapse, the small molecule TKI drug lapatinib was introduced in 2007 and was approved for the approved indication of combining with capecitabine for the treatment of Her2-positive, advanced or metastatic breast cancer previously treated with anthracycline, paclitaxel, and trastuzumab.

In 2013, the first ADC, emmetrazumab (Kadcyla), was launched. Like an upgraded version of trastuzumab, it not only achieved good therapeutic effect, but also had fewer toxic reactions and was more tolerated by patients. Since then, HER2 drugs have occupied a place in the fields of monospecific antibodies, small molecular drugs and ADC, and targeted drugs have blossomed in many areas, entering a new situation in many fields such as breast cancer, gastric cancer and non-small cell lung cancer.

Regarding HER2-targeted drugs, we have to mention Enhertu, a blockbuster product at the 2022 ASCO meeting. It is a next-generation ADC drugs that links trastuzumab, a humanized monoclonal antibody targeting HER2, with a novel topoisomerase 1 inhibitor exatecan derivative (DX-8951 derivative, DXd) via a 4-peptide linker to target delivery of cytotoxic agents into cancer cells, reducing systemic exposure to cytotoxic agents compared to usual chemotherapy [7].

The advantages of detrastuzumab are:

①Fewer toxin molecules: each Trastuzumab molecule is linked to 8 Deruxtecan, compared to 3.5 toxin molecules for Trastuzumab emtansine.
②Stability: Since the 4-peptide linker selected for T-DXd is very stable in the peripheral circulatory system, almost no toxin is released and the incidence of off-target effects is low, so the toxicity is further controlled.
③Easy-permeable membrane: Its toxin Dxd is relatively easy to penetrate the cell membrane, and it has already begun to produce a "by-standard effect" before the cell is lysed.

The efficacy of Trastuzumab Deruxtecan is not limited to HER2 positive, and patients with low HER2 expression who have only 1/2 points of HER2 protein expression but negative gene expression can also benefit.

People with low HER2 expression in Destiny-Breast04 included HR-positive, HER2-negative, and triple-negative subjects. 90% of the subjects had received at least two lines of therapy, and 70% of the HR-positive patients had also used CDK4/6 inhibitors. It can be clearly seen that the included population is broad, covering the field of breast cancer after-line treatment. However, the results are positive and it can be said that it has broken through the existing treatment methods for people with low HER2 expression and has become a new standard for the treatment of such people.

Future Planning And Layout of ENHERTU 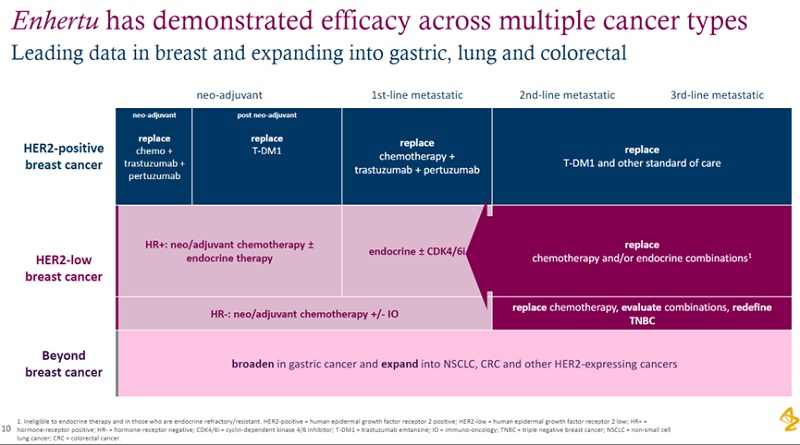 In the past, the HER2 positive criteria were established by trastuzumab. With the progress toward the updated clinical efficacy criteria, the biomarker detection criteria will be updated with continuous iteration and optimization, which provides further clinical evidence for the precision treatment of patients in the future. Therapies for HER2-positive breast cancer are rapidly evolving, resulting in improved outcomes and quality of life for patients diagnosed with early and metastatic disease. However, there are still many unanswered questions, and clinical trials are ongoing to further optimize efficacy in patient populations to achieve the best quality of life.

PEG-linkers are particularly attractive as a linker for Antibody–drug conjugates (ADCs). Biopharma PEG, a worldwide leader of PEG linker, dedicated to supplying different ADC linkers & Click Chemistry Reagents and other PEG derivatives to our clients all over the world.