Recently, tumor immunotherapy has developed rapidly, especially the combined protocol of PD-1/PD-L1 inhibitors and chemotherapy, which has become a new standard of treatment for many cancers. However, the systemic toxicity caused by chemotherapy are still a pressing clinical challenge.

Antibody Drug Conjugates (ADCs) can effectively improve the therapeutic window of chemotherapeutic drugs. Therefore, the design of PD-L1-directed ADC drugs is also a highly promising direction for research and development.

ADC drugs are novel tumor-targeted therapeutics consisting of antibody, linker and payload, which integrate the chemotherapeutic drug toxicity of payload and antibody-targeting effects. In recent years, with the breakthrough of coupling technology and the introduction of novel linkers and payloads, ADC drug development has gradually entered a fast track. Currently, 14 ADCs have been approved and more than 100 products are in the clinical stage. 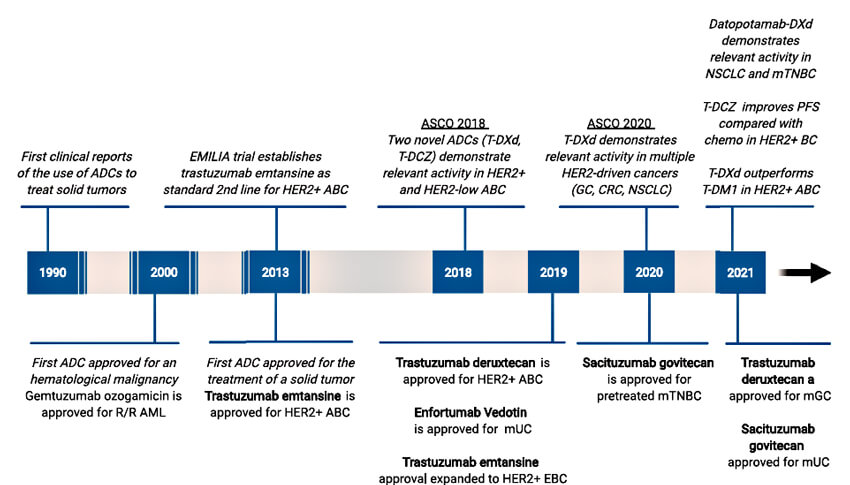 In recent years, immune checkpoint inhibitors (ICIs) represented by PD-1 and PD-L1 antibodies have promoted the rapid development of tumor immunotherapy and become another effective tumor treatment after surgery, radiotherapy, chemotherapy and targeted therapy. However, the heterogeneity of tumors and the complexity of the regulatory mechanism of PD-L1 expression, as well as the poor penetration of large-molecule anti-PD-L1 monoclonal antibodies (mAbs) into dense tumors, have led to a great limitation of the clinical application of anti-PD-L1 m, with the overall objective remission rate of patients at around 15%-30%.

To improve response rates and treatment outcomes in oncology patients, anti-PD-1 mAbs have been explored in combination with chemotherapy, targeted therapies and radiotherapy, especially chemotherapy. Since chemotherapy can lead to the death of immunogenic cells, thus allowing more tumor antigens to be released and effectively promoting the activation of immune response. In addition, it can reduce the number and activity of immunosuppressive cells. Therefore, chemotherapy is the main option for immune combination. However, the systemic side effects caused by chemotherapy remain a thorny issue. 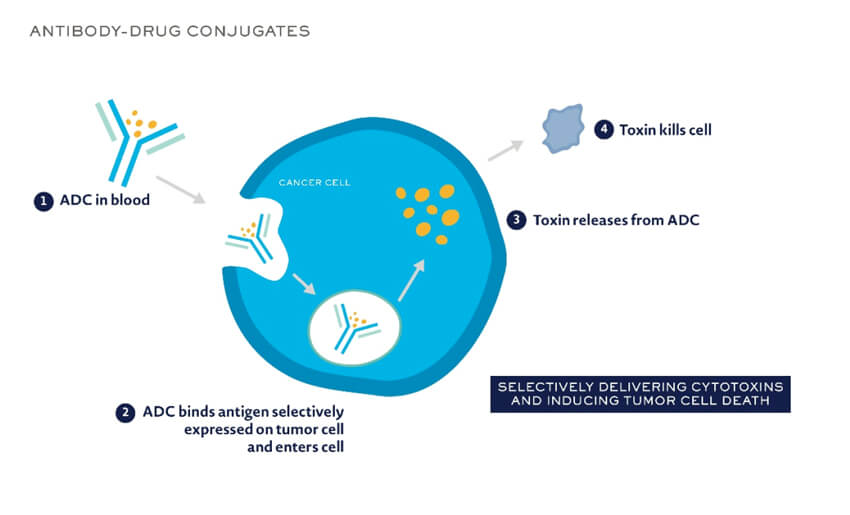 Given that PD-L1 is expressed in multiple tumor types and has limited expression in normal tissues, combining ADC drugs with anti-PD-L1 mAbs to generate bifunctional PD-L1-directed ADCs would be a very promising development direction.

Currently, there are several PD-L1-targeted ADC drugs in preclinical and Phase I stages. Among them, Seagen's SGN-PDL1V has made the fastest progress.

SGN-PDL1V is a PD-L1-directed ADC currently under preclinical investigation that consists of an anti-PD-L1 antibody conjugated to a vedotin drug ligand. The vedotin drug linker consists of a microtubule disruptor, monomethyl auristatin E (MMAE), and a protease-cleavable peptide linker. The main mechanism of action of the proposed SGN-PDL1V is direct cytotoxicity against PD-L1-expressing malignant cells by delivering the MMAE payload. In addition, MMAE induces immunogenic cell death leading to subsequent immune activation of the tumor microenvironment. 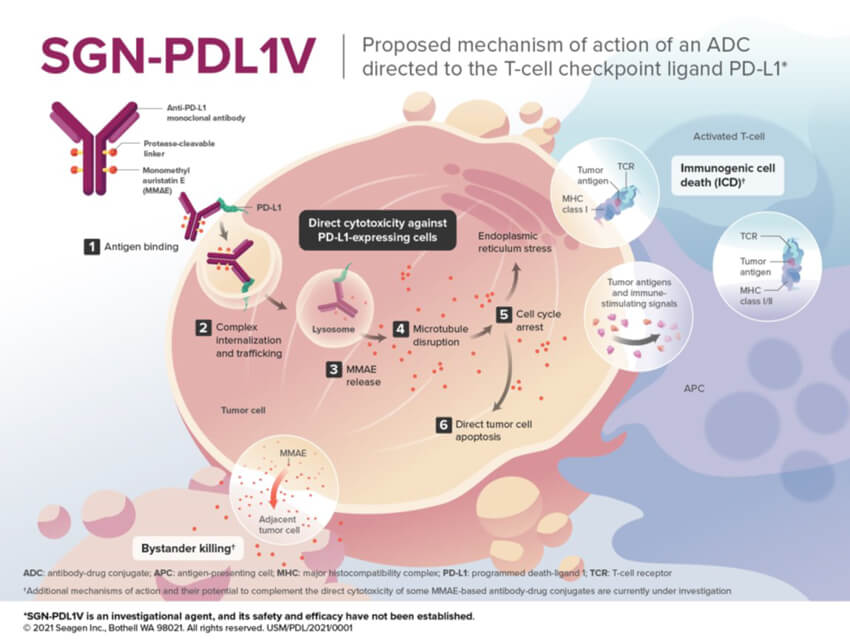 Data from preclinical investigation of SGN-PDL1V were presented during the Society for Immunotherapy of Cancer (SITC) annual meeting in 2021.

Seagen is also currently developing models capable of simultaneously assessing the cytotoxicity of SGN-PDL1V and validating the mechanism of action of checkpoint blockade.

Based on data from preclinical investigations, Seagen has initiated a Phase I clinical trial (NCT 05208762) in 2022 to evaluate the safety of SGN-PDL1V in patients with solid tumors (NSCLC, head and neck squamous cell carcinoma, esophageal cancer, ovarian cancer, melanoma). The study is divided into 3 parts: Parts A and B will explore the dosing of SGN-PDL1V; Part C will evaluate the safety of SGN-PDL1V using the dosing determined in Parts A and B. It is planned to enroll 305 patients. This shows the great expectations of Seagen for SGN-PDL1V.

In addition to SGN-PDL1V, which has entered the phase I clinical stage, there are several PDL1-ADC products in the preclinical stage, with the main differences being the choice of linker, payload, and antibody.

Some research teams have started to try to make a breakthrough in linker selection. Since the tumor extracellular environment is inherently acidic, acid pH sensitive linkers are also often used in ADC design so that payload (e.g. Dox, epirubicin) can be selectively released in the tumor environment. 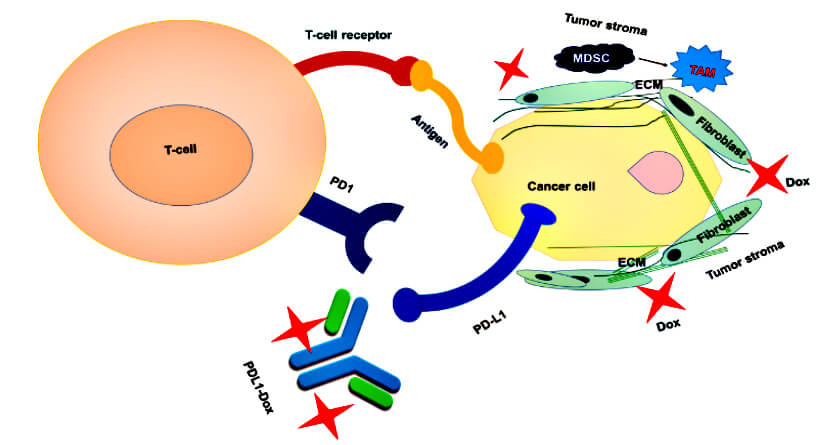 The team introduced the PDL1-Dox ADC containing a hydrazone linker that will selectively cleave in the tumor cell environment. In addition, the team used PEG spacers to enhance the water solubility of the antibody and maintain the circulation of PDL1-Dox.

In terms of antibody selection, some research teams have also chosen Atezolizumab, an anti-PD-L1 mAb that has been approved for marketing. The design idea is that Atezolizumab generates bifunctional PD-L1-ADC by binding to MMAE through a classical dipeptide (valine - alanine) linker.

Atezolizumab was found to have higher endocytosis efficiency compared to avelumab through pre-basic studies, making it an ideal antibody choice for PD-L1-ADC products.

With the continuous advancement of tumor therapies, the concept of multi-target and multi-mechanism synergistic anti-tumor has gradually become a direction of anti-tumor drug development.

In view of the breakthroughs achieved by ADCs and ICIs in tumor therapy in recent years, a number of companies have already started to explore the combination of ADCs and PD-1/L1 inhibitors and have achieved encouraging efficacy data.