Since the FDA approved the first monoclonal antibody in 1986, antibody drugs have emerged in a variety of innovative and diverse forms, including Antibody Drug Conjugates (ADCs), bispecific antibodies, nanobodies, and other forms.

ADCs are known as biological missiles, and there are currently 14 drugs approved worldwide. The primary mechanism of action is internalization of the ADC, with the release of the payload into the cytoplasm after cleavage of the linker. This makes the ADC drugs very demanding in terms of the targets to which the antibodies bind.

The rapid development of bispecific antibody (BsAb) technology contributes to more choices of antibodies as a partner of ADCs. Conjugating payload into BsAb to improve specificity and internalization, called bispecific ADCs (BsADCs), has been studied in recent years, which may be a solution to the existing problems of endocytosis, toxicity and drug resistance of ADC drugs.

What Are The Features Of Bispecific ADCs?

Tumor-associated antigen (TAA) is an important class of druggable targets that are highly expressed specifically on tumor cells. With the rapid development of linker and payload technologies, significant progress has been made in the development of TAA-based antibody-coupled drugs (ADCs), with 14 ADCs targeting 11 TAA targets approved to date.

Bispecific ADC drugs targeting dual TAA are a brand new form of escalating on top of the advantages of ADC.

(i) Two targets can enhance tumor targeting and reduce the toxicity to normal tissues.
(ii) Certain dual-epitope bispecific ADCs or dual-target bispecific ADCs can produce better internalization and enhance the killing effect.
(iii) Overcome the problem of drug resistance caused by decreased single-target expression. However, while dual-targeting brings better efficacy, it may also have the problem of a too narrow therapeutic window. Especially in TAA, the expression of this target also exists in non-tumor tissues, and the toxicity of the two combinations together may exceed the simple sum of the two.

In terms of global drug development, the research and development of the bispecific ADC pipeline are still in its early stage and there are few preclinical products in development. There are three major challenges ahead.

M1231 is an EGFR/MUC1 bispecific ADC developed by SUTRO that uses the company's proprietary fixed-point coupling technology to attach Hemiasterlin derivatives to specific amino acid sites of the antibody via a cleavable linker with a DAR value of about 4. 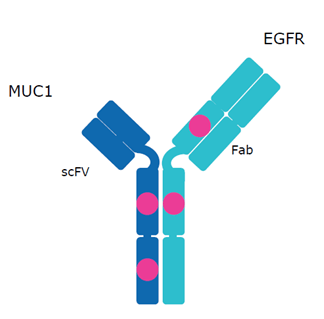 EMD Serono presented preclinical data of M1231 at 2020 AACR. The results showed that a single dose of M1231 exhibited some tumor curative effect in NSCLC and sqCC Esophageal PDX models, and there was a correlation between tumor remission effect and target expression.

In January 2021, an open-label, non-randomized, parallel, dose-escalating, dose-expanding Phase I clinical trial (NCT04695847) was initiated in the United States and Canada to evaluate the safety, pharmacokinetics, tolerated dose and clinical efficacy of M-1231 as a single agent in the treatment of patients with advanced solid tumors (expected n=84).

ZW-49 is a bispecific ADC drug developed by Zymeworks that specifically binds both non-overlapping epitopes of the HER2 receptor (ECD4/trastuzumab and ECD2/pertuzumab). The bispecific ADC is based on ZW25 coupled to Auristatin toxin A via a protease cleavage linker.

Figure 4. Structure of ZW49, and its advantages, source: reference [3] 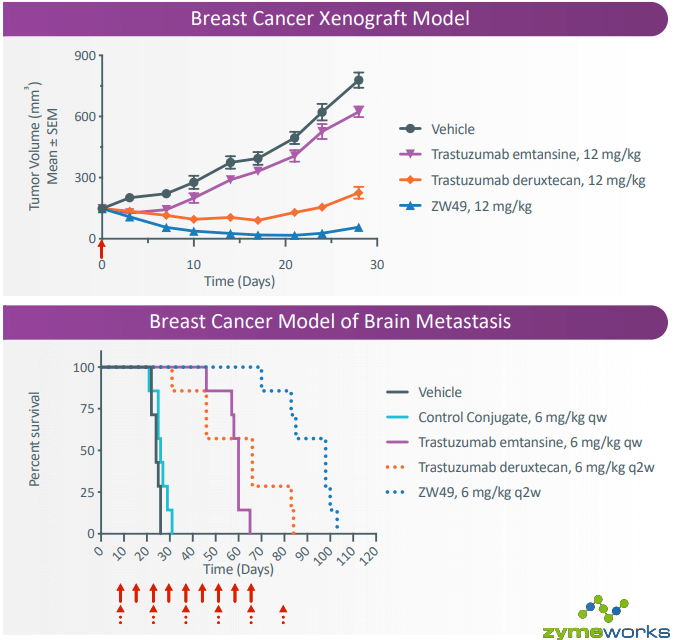 In January 2021, Zymeworks published selected data from the Phase I clinical trial of ZW-49. The results showed that ZW-49 demonstrated antitumor activity across all treatment regimens and dose levels. Partial remission (PR) and stable disease (SD) were observed in both Q2W and Q3W dosing regimens. And in all 35 patients treated with ZW-49, no treatment-related hematotoxicity, pulmonary toxicity and hepatotoxicity were observed. More than 90% of the adverse reactions were mild or moderate.

REGN5093- M114 is a bispecific ADC developed by Regenron targeting two different epitopes of MET. The antibody is a 1+1 asymmetric bispecific antibody that links the antibody to the toxin M24 ( maytansine derivative) through the M114 linker with a DAR value of about 3.2. 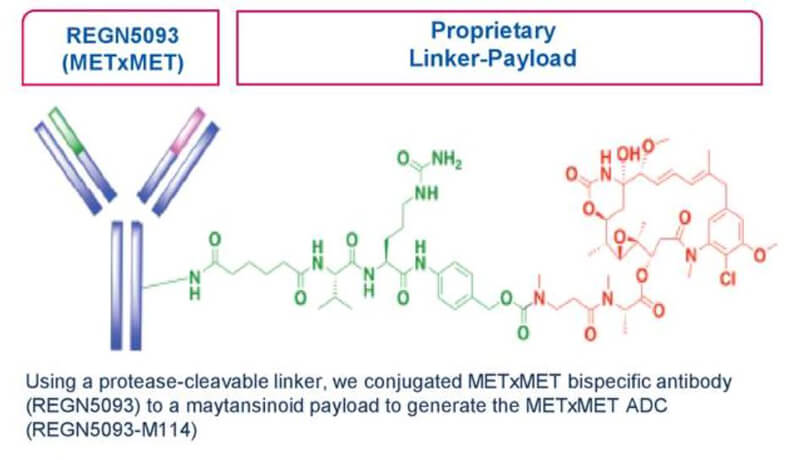 REGN5093-M114 naked antibody itself also has some tumor suppressive effect and has demonstrated good efficacy in a variety of preclinical models. In various animal tumor models, REGN5093-M114 at 10 mg/kg could completely inhibit tumor cells or even clear them, while METxMET bispecific antibody without toxin coupling could only inhibit tumor growth at doses up to 25 mg/kg, and could not clear tumor cells. And compared with the MET ADC drugs already in the clinic, the bispecific ADC REGN5093-M114 could not only inhibit tumor growth but even remove tumor cells at the same dose (Figure 7 below), so its efficacy is much better than the ADCs in the clinic.

BL-B01D1 is an EGFR/HER3 bispecific ADC developed by Baili Pharmaceuticals, which adopts its unique AC linker to link the camptothecin derivative ED04 to the cysteine site of the antibody with a DAR value of about 7.5. The results of the preclinical study showed that BL-B01D1 was able to exert good anti-tumor effects at an administered dose of 10 mg/kg. On October 19, 2021, Baili Pharma's clinical trial application for BL-B01D1 received implied permission from the NMPA for the treatment of advanced or metastatic epithelial tumors. 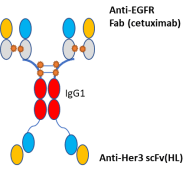 ADC drugs have been developed over several decades before they have begun to show results. The emergence of bispecific ADCs is an outgrowth of the trend toward antibody engineering and coupling technology. Although there are still a few projects carried out and failures have occurred, this is just the general rule of drug development. It is believed that the concept of bispecific antibodies can provide more ideas in the current context of multiple factors that emphasize differentiation and temporary target "depletion".

Biopharma PEG, as a leading PEG supplier, offers high-quality PEG derivatives and raw materials for your drug research and development. These compounds feature great aqueous solubility, a wide range of polymer length/weight, and a broad selection of all the popular functional groups. Please visit our product page for all our in-stock PEG reagents.