Peptide drug development has made great progress in the last decade thanks to new production, modification, and analytic technologies. Peptide is a class of compounds formed by multiple amino acids connected by peptide bonds, usually consisting of 10-100 amino acid molecules, which are connected in the same way as proteins, with a relative molecular weight less than 10000.

In recent years, with the development and maturity of peptide synthesis technology, peptide drugs have become one of the hot spots in drug development, and they have been widely used in the prevention, diagnosis and treatment of tumor, cardiovascular and cerebrovascular diseases, hepatitis, diabetes, AIDS and other diseases with broad development prospects due to their wide indications, high safety and remarkable efficacy. 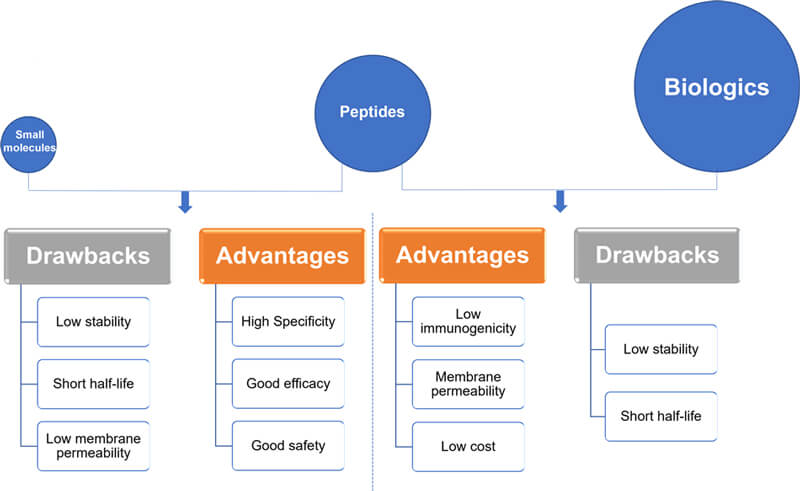 Peptide drugs are still facing some challenges, such as problems in drug design and high-throughput screening, manufacturing process and product purity, which lead to substandard product quality or excessive cost and limit the development of peptide drugs. Meanwhile, there is a need not only to discover new peptide drugs but also to find new dosage forms and drug delivery systems so that peptide drugs can continue to maintain stability and activity when they enter the body.

Up to now, there are more than 80 peptide drugs in the global market, covering a market of more than 30 billion US dollars, And more than 170 peptides are in active clinical development, with many more in preclinical studies. 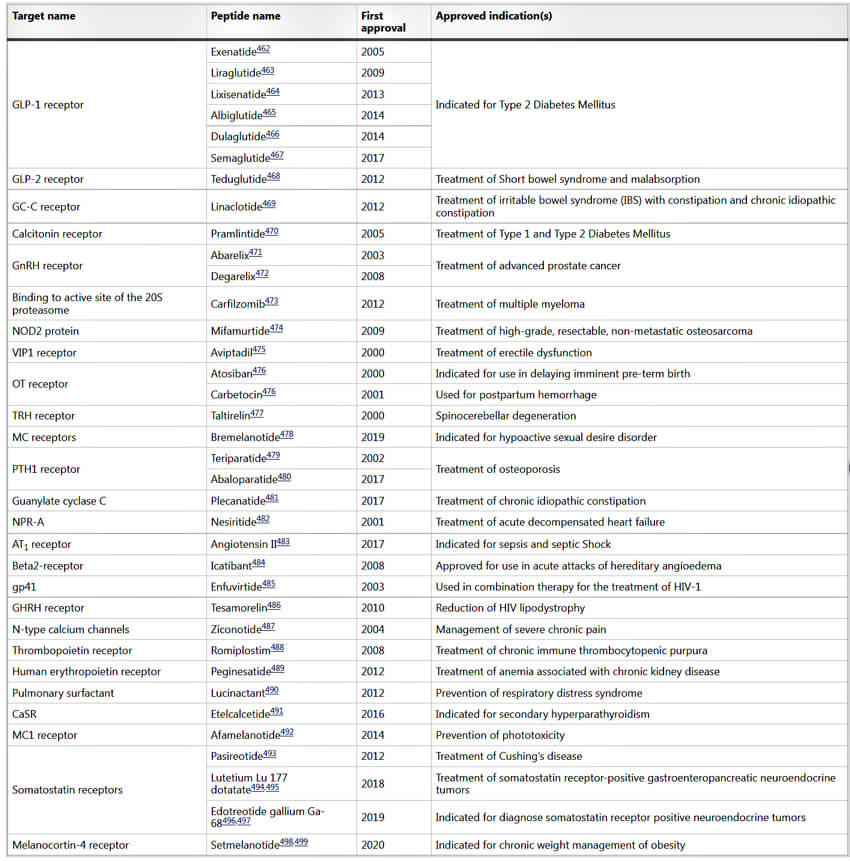 Figure 2. Peptide drugs approved since 2000, with their targets and indications, source: reference [1]

In the past, when it comes to the innovation of peptide drugs, most of them are at the formulation level, basically around the slow release technology such as microspheres, etc. In fact, in recent years, many new technologies such as multifunctional peptides, peptide drug conjugates (PDC), Cell-Penetrating Peptides, etc. have appeared in the field of peptide innovative drugs, which provide strong technical support for the innovation of peptides.

Multifunctional peptides are the coupling of multiple peptide functional sites to perform multiple functions and simultaneously improve the efficacy and druggability of indications. The simultaneous activation of different signaling mechanisms maximizes bioactive benefits, minimizes side effects, and provides a more balanced pharmacokinetic profile than that of a single peptide. Most of these studies are currently being developed by large pharmaceutical companies, including Eli Lilly, Merck, Johnson & Johnson, Sanofi, Novo Nordisk, and others. 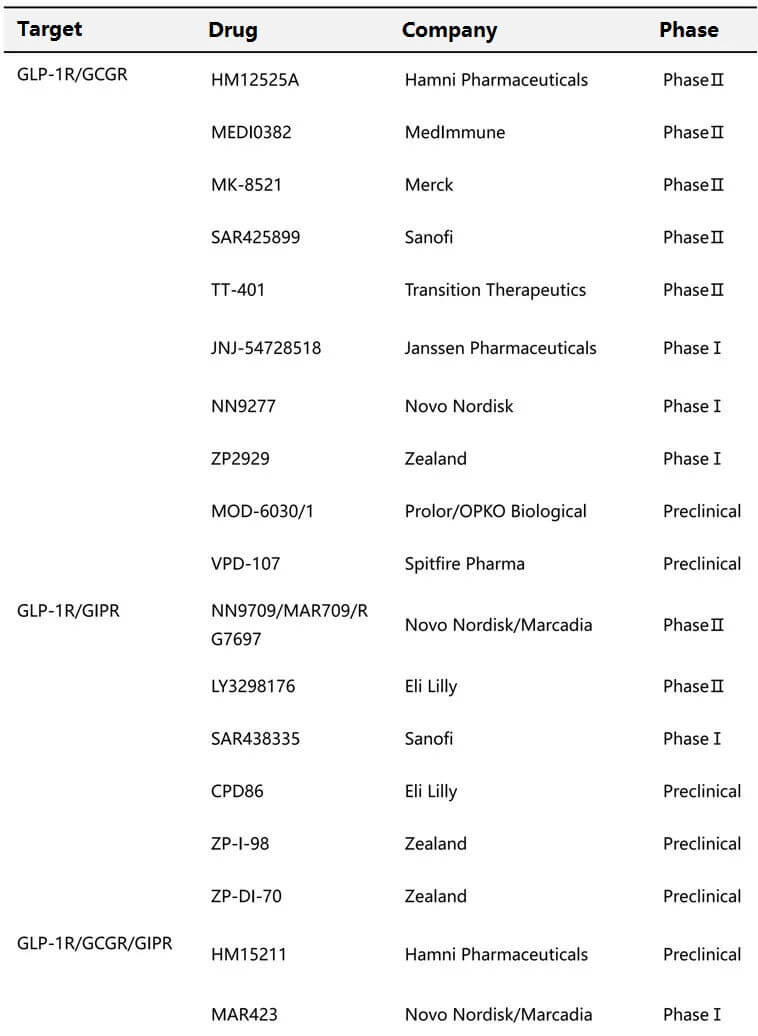 Peptide Drug Conjugates (PDC) are a new type of drug conjugates that couples a cell-targeting peptide with a drug molecule to enhance drug targeting, improve effectiveness and reduce adverse effects. Compared to antibody-drug conjugate (ADC), it relies on a peptide chain of about 10 amino acids to target tumor cells, so it does not bring about an immune response; it can be prepared on a large scale using solid-phase synthesis; it can be rapidly eliminated by the kidney and is less toxic to the bone marrow and liver. Unlike phages, adenoviruses, or other microorganisms used exclusively for transporting drugs, this vector does not contain infectious substances. 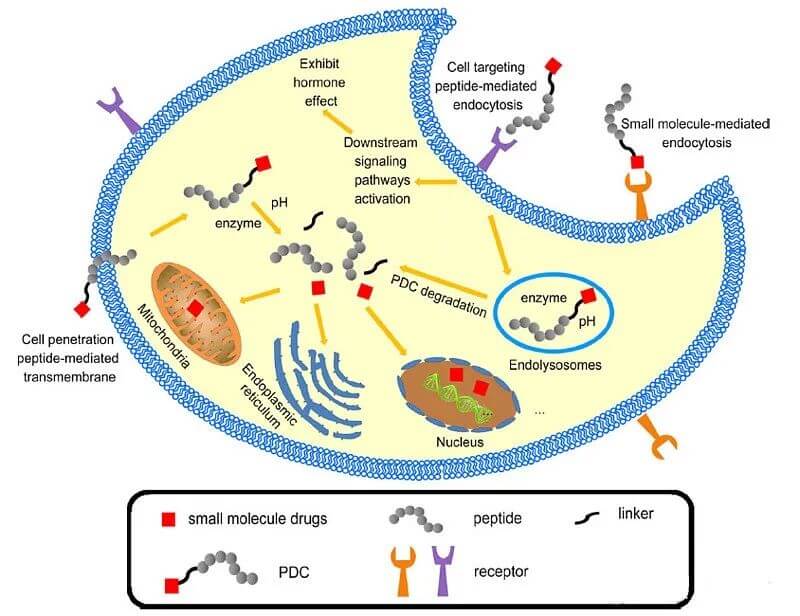 On February 26, 2021, Pepaxto (melphalan flufenamide, also known as melflufen), a peptide-coupled drug developed by Oncopeptides, received accelerated approval for marketing by the FDA in the U.S., becoming the second PDC drug on the market worldwide, triggering a wave of interest in PDC drugs. Unfortunately, in October 2021, melphalan flufenamide was withdrawn from the US market. Internationally, more than seven products have entered the clinic, and the companies with faster progress include Oncopeptides, Bicycle Therapeutics, Cybrexa Therapeutics, Peptidream, etc.

Cell-penetrating peptides (CPPs) are a class of peptides consisting of usually no more than 30 amino acid residues that can directly cross the cell membrane and enter the cell. They are positively charged peptide fragments of varying lengths, rich in basic amino acid residues such as arginine and lysine, and have an α-helical spatial conformation in their secondary structures. Using these properties, more penetrating and efficient membrane penetrating peptides PEp-1 and MPG have been synthesized and successfully carry active substances (such as small molecule drugs, peptides, proteins, siRNAs, and nanoparticles) into cells to exert biological activities, and some scholars call these short peptides as protein transduction domains or Trojan horse peptides. Cell-penetrating peptides can effectively promote transdermal absorption of biomolecular drugs, and are of great value in targeted formulations, transdermal drug delivery formulations and cosmetic fields, which can significantly improve the bioavailability of drugs.

Peptide vaccines are vaccines prepared by chemical synthesis techniques following the amino acid sequence of a known or predicted segment of an antigenic epitope in the antigenic gene of a pathogen.

Tumor therapeutic peptide vaccines are one of the important directions. The difference between tumor cells and normal cells can be described as many different, but the most fundamental difference is due to the mutations of tumor cells. There are many tumor cells with various mutations, and some of them are presented to the surface of tumor cells by MHC, which are then specifically recognized by TCR of T cells, thus directly killing tumor cells, and such mutated peptides are called neoantigen. If neoantigens specific to tumor cells can be identified and used as amino acid sequences to develop cancer vaccines, they can activate relevant immune cells to kill tumor cells with the same antigen. Current challenges include poor immunogenicity and efficacy limited by HLA phenotype.

Prophylactic peptide vaccines will be a much-needed emerging field. From inactivated vaccines to recombinant protein vaccines to mRNA vaccines, immunodeficient populations cannot be adequately protected, and a paper in the November 24, 2021 issue of Nature gives us hope of closing the gap. A peptide COVID-19 vaccine called CoVac-1, designed under the leadership of the University of Tübingen, Germany, has demonstrated good safety, reactogenicity and immunogenicity in phase I clinical trials and good protection against a variety of current mutant strains. Phase II clinical trials are currently underway for this vaccine. The main active ingredients of this vaccine are specific T-cell epitopes from a variety of covid-19 virus proteins (including spiked proteins, nucleoprotein shells, membrane glycoproteins, envelope glycoproteins, etc.) that bind to the Toll-like receptor agonist XS15 and are emulsified in adjuvant, allowing the vaccine to produce a durable T-cell response. 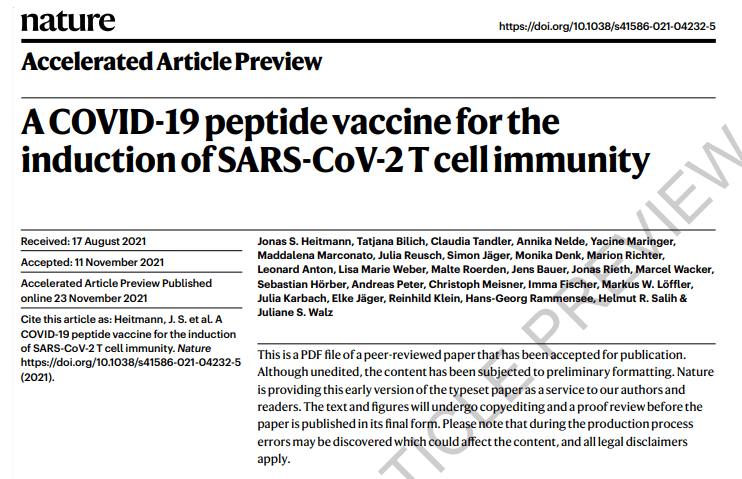 It is a very meaningful thing to upgrade the existing finished peptide drugs because of their short half-life. The current ideas for the improvement of peptide drugs are generally long-lasting injectable products, such as the preparation of peptide liposomes, peptide microspheres, polyethylene glycol (PEG) modification, fusion proteins or subcutaneous implantation, and secondly, bypassing injection, oral administration, transdermal administration and inhalation administration.

PEG is a non-biodegradable, non-toxic, low-immunogenic polymer. PEGylation increases the effective molecular weight of peptides to reduce their renal clearance through renal filtration. PEG molecules can also protect peptides from protease digestion by increasing steric hindrance and help increase absorption by increasing the water solubility of the target peptide. These advantages have made PEGylation a common strategy for modifying therapeutic peptides, and PEGylation has been used with great success since the 1970s to optimize peptide therapy. Currently, there are more than 10 PEGylated peptide therapeutics on the market, with many more potential candidates in clinical trials

Peptides have become a unique class of therapeutic agents in recent years as a result of their distinct biochemical characteristics and therapeutic potential. Biopharma PEG, as a professional PEG supplier,  offers PEGylation as a cost-effective modification of peptides which has the potential to improve bioavailability compared to the unmodified molecule.