Nectin-4 (Nectin cell adhesion molecule 4) is a cell adhesion molecule of the Nectin and Nectin-like families that is highly abundant in normal embryonic and fetal tissues and poorly expressed in healthy adult tissues. Nectin-4 is a type I membrane glycoprotein that consists of an extracellular region with three Ig domains of Ig V and IgC types. The soluble form is produced by proteolytic cleavage at the cell surface by the metalloproteinase ADAM17/TACE. 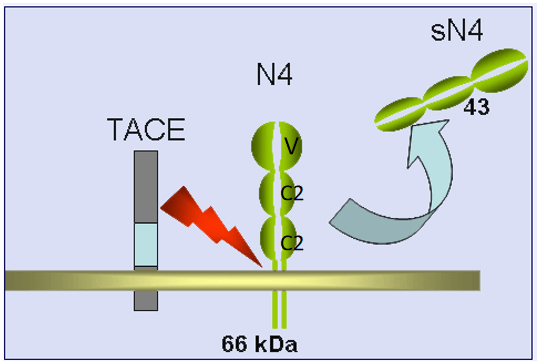 It has been found that Nectin-4 promotes tumor cell proliferation, differentiation, metastasis, and invasion through activation of the PI3K/Akt pathway, and is thought to play an important role in cancer pathogenesis and metastasis. It is based on these research backgrounds that drug studies targeting Nectin-4 have emerged.

Enfortumab vedotin (Padcev) is the world's first and only Nectin-4-directed antibody drug conjugate (ADC) approved by the FDA in 2019 for the treatment of patients with locally advanced or metastatic uroepithelial cancer (la/mUC) who have received prior PD-1/L1 inhibitors and platinum-based chemotherapy. In April 2022, Padcev received further European Commission (EC)  approval for monotherapy of la/mUC.

Padcev, a "first-in-class" drug jointly developed by Astellas and Seagen, is an ADC drug that targets the Nectin-4 monoclonal antibody enfortumab and the microtubule-disrupting agent MMAE through a cleavable dipeptide linker. When Padcev binds to Nectin-4 on the surface of tumor cells and enters the cells through endocytosis, the dipeptide linker is cleaved by intracellular proteolytic enzymes to release the toxin MMAE for targeted tumor killing. 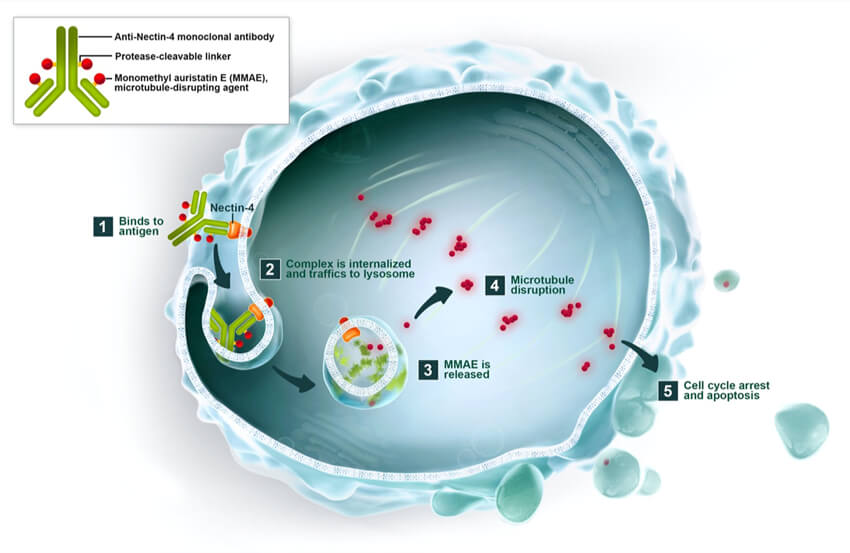 In December 2019, based on the results of the Phase II clinical EV-201 trial, the FDA granted accelerated approval for Padcev for the treatment of patients with locally advanced or metastatic uroepithelial cancer (UC) who have received chemotherapy with PD-(L)1 inhibitors and platinum-based agents. Results from the EV-201 trial showed that Padcev achieved an objective remission rate of 44% (55/125) with 12% CR, 32% PR, 28% SD, median PFS of 5.8 months, median OS of 11.7 months and median DoR of 7.6 months in UC patients previously treated with PD-(L)1 and platinum-containing chemotherapy regimens.

In March 2020, Astellas initiated a 280-patient Phase 2 study (NCT04225117) to explore the efficacy and safety of Padcev® in a variety of advanced solid tumors, including non-small cell lung cancer, breast cancer, head and neck cancer, and esophageal cancer.

On November 2, 2021, Astellas registered the ENCORE study (NCT04754191) to explore Padcev® as a monotherapy for the treatment of metastatic desmoid-resistant prostate cancer.

Astellas is exploring the ongoing advancement of Padcev® to frontline treatment of uroepithelial cancer and exploring other solid tumor indications.

In addition to monotherapy, Padcev is being explored in combination with Pembrolizumab (Keytruda) to target Nectin-4 high expressing tumor cells through small molecule toxins on the one hand and activate T cells to destroy tumor cells on the other. EV-103 is a multi-cohort, open-label, multi-center phase Ib/II clinical trial to evaluate the efficacy of Padcev in combination with Keytrude for the first-line treatment of UC. Recently, Seagen announced that cohort K of the EV-103 study met its primary endpoint of 64.5% objective remission rate (ORR) confirmed by blinded independent central review (BICR) in patients treated with Padcev in combination with Pembrolizumab. 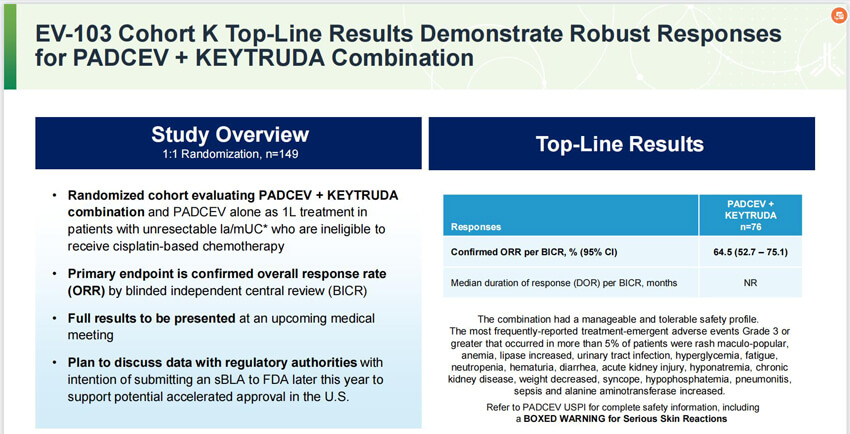 In an analysis published in the Nature Reviews Drug Discovery, the nectin-4 ADC drug Enfortumab vedotin is predicted to have the second highest sales of $3.5 billion in 2026. In the first half of 2022, Padcev (enfortumab vedotin-ejfv) reported strong sales growth, with net sales of $223 million, up 47% year-over-year.

Bicycle Therapeutics has developed two therapies targeting Nectin-4 based on Bicycle technology. One type is the Bicycle Toxin Conjugate (BTC), BT8009, and the other is the bispecific bicyclic peptide, BT7480.

BT8009, a peptide drug conjugate (PDC), has demonstrated excellent antitumor activity in preclinical studies and is currently in phase I/II clinical trial of monotherapy in patients with advanced solid tumors associated with Nectin-4 expression and is planned to evaluate BT8009 in combination with nivolumab (NCT04561362).

At the 2022 AACR Annual Meeting, Bicycle Therapeutics presented the latest clinical trial results for BT8009. Results of the trial showed a confirmed overall remission rate of 50% in a cohort of patients with urothelial carcinoma treated with BT8009 at a dose of 5.0 mg/m2 per week.

In this clinical trial, patients with solid tumors who had received an average of three prior treatments received different doses of BT8009, 49% of whom were patients with urothelial carcinoma. Results of the trial showed that of the eight patients with uroepithelial carcinoma treated with BT8009 at a dose of 5.0 mg/m2 per week, four patients achieved confirmed remission, including one patient who achieved complete remission. Two other patients had stable disease with a disease control rate of 75%. As of March 7, 2022, the median duration of remission has not been reached and remission remains maintained in three patients, who have been treated for at least 24 weeks.

BT7480 is a novel, first-in-class tumor-targeted immune cell agonist™ (TICA™), designed to deliver a highly potent CD137 agonist to Nectin-4 overexpressing tumor tissue with a flexible dosing schedule maximizing anti-tumor activity while circumventing the need for continuous systemic exposure. BT7480 comprises 3 bicyclic peptides (Bicycles), 1 that binds to Nectin-4 and 2 that bind to CD137. The Bicycles are conjugated via a branched trimeric polyethylene glycol linker. Now, BT7480-100  is under PhI/II study(NCT05163041). 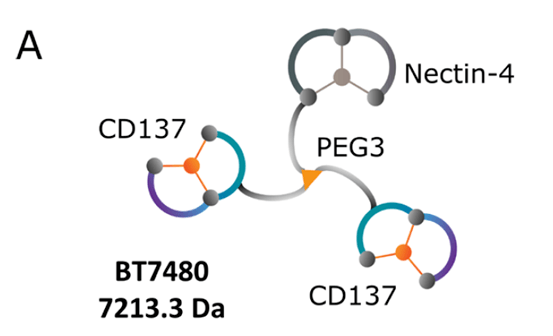 In Jan 2022, The Center for Drug Evaluation (CDE) of China National Medical Products Administration approved the investigational new drug application (IND) for 9MW2821, an anti-Nectin-4 ADC drug candidate, being developed by Shanghai Mabwell. A phase I study to evaluate the safety, tolerability, pharmacokinetic characteristics, and preliminary effectiveness in patients with advanced solid tumors started earlier this month. It is the second Nectin-4 ADC drug in the world to be approved for clinical studies.

On August 1, 2022, the clinical trial application for 9MW2821 was approved by the FDA for the treatment of solid tumors.

9MW2821 has the advantages of homogeneous structure, high purity and easy industrialization, and shows good druggability properties in terms of affinity, endocytosis properties, preliminary in vivo and in vitro pharmacodynamic activities, drug metabolism properties and preliminary safety. The preclinical pharmacological and toxicological results showed that this species has good tumor suppression effect in various animal tumor models, and the safety in macaca fascicularis and mice showed a better therapeutic window, which is expected to further demonstrate its clinical value through clinical studies.

Despite the approval of the ADC drug Padcev targeting Nectin-4 in the US in 2019, there are currently fewer ADC products laid out for the Nectin-4 target compared to popular targets such as HER2 and Trop2. In addition to monotherapy, the combination regimen of Nectin-4 ADC and immune checkpoint inhibitors has also shown excellent clinical potential. In addition, apart from the indication of uroepithelial cancer, Nectin-4 ADC is expected to further broaden the indication to breast cancer, pancreatic cancer and ovarian cancer in the future.