Although multiple myeloma remains an incurable disease, the 5-year relative survival rate has nearly doubled in the last 20 years, from 32.1% in 1996 to 54.9% in 2016, according to the National Cancer Institute. Over the past 5-10 years, numerous treatment options have entered the myeloma treatment arena, greatly extending progression-free survival (PFS) and overall survival (OS). The focus of research has shifted from systemic therapies such as chemotherapy to more specific targeted therapies such as immunotherapy. A variety of innovative targeted therapies that are effective against multiple myeloma, such as monoclonal antibodies (mAbs), CAR-T cell therapy, antibody-drug conjugates(ADCs), and bispecific antibodies, have made rapid progress.

Unlike traditional targeted drugs, Daratumumab is the first monoclonal antibody drug that directly targets the CD38 protein on multiple myeloma cells. In November 2015, Daratumumab was approved for marketing by the U.S. Food and Drug Administration (FDA) for the treatment of multiple myeloma in people who had received at least three prior therapies.

Elotuzumab is a monoclonal antibody developed by Bristol-Myers Squibb (BMS) and AbbVie that targets the cell surface protein SLAMF7, which is found in both multiple myeloma cells and natural killer (NK) cells. It provides a dual attack on cancer by directly targeting multiple myeloma cells and enhancing the ability of NK cells to kill them. The drug did not have significant activity alone in the treatment of relapsed/refractory multiple myeloma, but when combined with other antitumor agents, such as bortezomib or lenalidomide, the antimyeloma activity was significant, improving patient response rates and clinical prognosis. Elotuzumab was approved for marketing by the FDA on November 30, 2015, and was used in combination with lenalidomide and dexamethasone in combination with lenalidomide and dexamethasone for the treatment of multiple myeloma with one to three prior treatments.

Isatuximab, an IgG1 chimeric monoclonal antibody developed by Sanofi, targets a specific epitope of the plasma cell CD38 receptor and is able to trigger a variety of unique mechanisms of action, including promotion of programmed tumor cell death (apoptosis) and immunomodulatory activity. CD38 is expressed at high levels on multiple myeloma cells and is a cell surface receptor target for antibody therapy in multiple myeloma and other malignancies.

Isatuximab has been granted orphan drug status for the treatment of relapsed/refractory multiple myeloma in both the United States and the European Union. Currently, related studies are also evaluating the potential of Isatuximab in other hematologic malignancies and solid tumors. On March 2, 2020, the U.S. FDA approved Isatuximab in combination with carfilzomib and dexamethasone, for the treatment of adult patients with relapsed or refractory multiple myeloma who have received one to three prior lines of therapy.

Another immunotherapy targeting multiple myeloma is against another target on the surface of myeloma cells, the B-cell maturation antigen (BCMA), which is not found in healthy cells. The most promising of the BCMA-targeted therapies is CAR-T cell therapy. 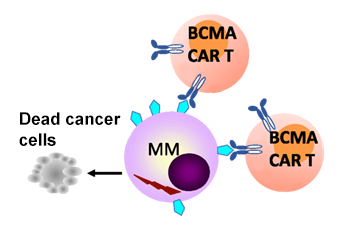 Cytokine release syndrome (CRS) and neurotoxicity are common adverse effects of CAR-T cell therapy, independent of the target or tumor type. In clinical studies, the majority of CRS events were grade 1 or 2, with only a very small number of patients being grade ≥3. Most CRS can be treated with tocilizumab and other standard approaches. Most neurotoxic events were manageable and manageable.

CAR-T is a promising new approach for the treatment of MM with the ability to kill MM cells that are resistant to standard therapies. CAR-T for MM is currently in the improvement and enhancement phase, and the main goals for the future are to improve CAR-T structure, increase CAR-T safety timeliness, and manage long-term complications of CAR-T cell therapy.

In August 2020, the U.S. FDA granted accelerated approval to Blenrep (belantamab mafodotin) from GlaxoSmithKline (GSK) as monotherapy for adult patients with relapsed or refractory multiple myeloma who have received at least four prior therapies, including anti-CD38 monoclonal antibodies, proteasome inhibitors, and immunomodulators. Notably, Blenrep is the world's first approved BCMA-directed antibody-drug conjugate.

The approval of Blenrep is based on the results of the DREA multiple myeloma clinical trial program, which enrolled patients with R/R multiple myeloma whose disease was still progressing after current standard therapy. In the study, patients received single-agent Blenrep 2.5 mg/kg administered once every 3 weeks. The results of the study showed that patients (n=97) treated with Blenrep who received both median 7 lines of therapy achieved an overall remission rate (ORR) of 31% (97.5% CI; 21-43); median duration of remission (DoR) had not been reached at the 6-month analysis, however, 73% of these patients in remission had a DoR equal to or greater than 6 months. The most common adverse events were keratoconus (20%), vision loss, nausea, blurred vision, fever, infusion-related reactions, and fatigue. Compared to CAR-T therapies, ADCs are inexpensive and easy to manufacture and administer. They also do not cause cytokine release syndrome. 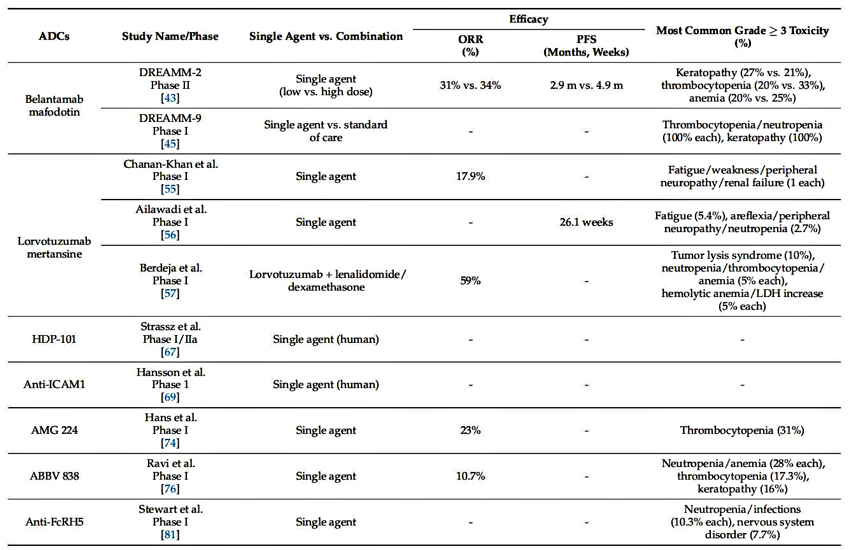 Bispecific Antibodies represent another approach to treating MM, utilizing the high cytolytic activity of T cells. While one arm binds to a plasma cell or B-cell lineage-associated antigen, a second arm recruits T cells via the CD3 domain, thereby bringing T cells in close proximity to MM cells, ultimately leading to granzyme and perforin exocytosis and apoptosis of the target cell. Now, there are no bispecific antibodies approved for MM, but many drugs are under investigation, such as Teclistamab, Pavurutamab (AMG 701), CC-93269, AMG 420, PF-3135, REGN5458, Talquetamab, etc. 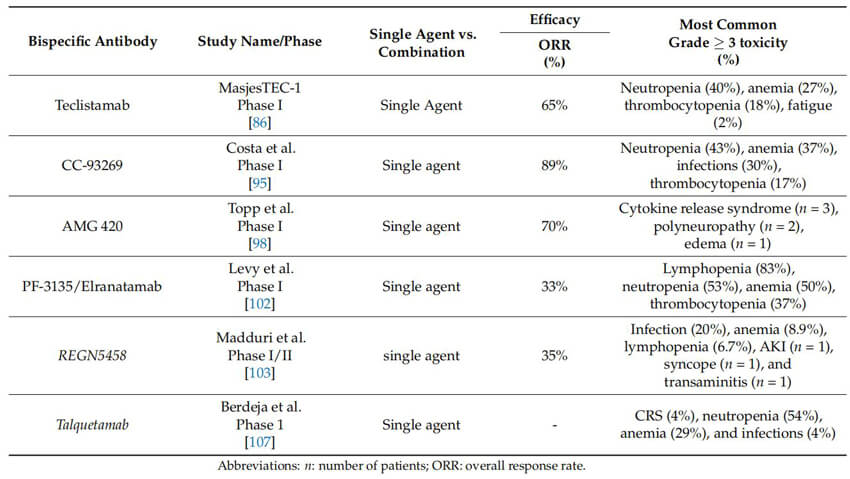 According to Datamonitor Healthcare forecasts, the combined size of single-disease mainstream drugs for multiple myeloma in major countries worldwide (seven countries, including the United States, Japan, France, Germany, Italy, Spain, and the United Kingdom) is approximately $12 billion, with a steady growth rate of 5-8% over the next 3-5 years. The current practice for MM treatment involves immune therapy as a standard approach for RRMM, and it is increasingly being used for NDMM and studies have shown promising results. We are looking forward to more innovative drugs approved for MM.