PEGylated Liposomes in the Clinic and Clinical Trials

Liposomes are self-assembled (phospho)lipid-based drug vesicles that form a bilayer (uni-lamellar) and/or a concentric series of multiple bilayers (multilamellar) enclosing a central aqueous compartment. In 1964, Bangham first reported the bilayered vesicle structure of liposomes. Since then, liposomes have gained much attention in the biomedical and pharmacological fields as a drug delivery system with many advantages.

As drug vehicles, liposomes exhibit outstanding properties, such as protecting the encapsulated substances from physiological degradation, extending the half-life of the drug, controlling the release of drug molecules, and excellent biocompatibility and safety. Furthermore, liposomes can selectively deliver their payload to the diseased site through passive and/or active targeting, thus decreasing the systemic side-effect, elevating the maximum-tolerated dose, and improving therapeutic benefits. But the rapid phagocytosis and clearance of ordinary liposomes by the mononuclear phagocyte system (MPS) after they enter the blood circulation has somewhat limited their widespread use in the clinic. In order to solve these problems, Blume and Klibanov successfully prepared PEGylated liposomes by applying PEG to the surface of liposomes for the first time in 1990. 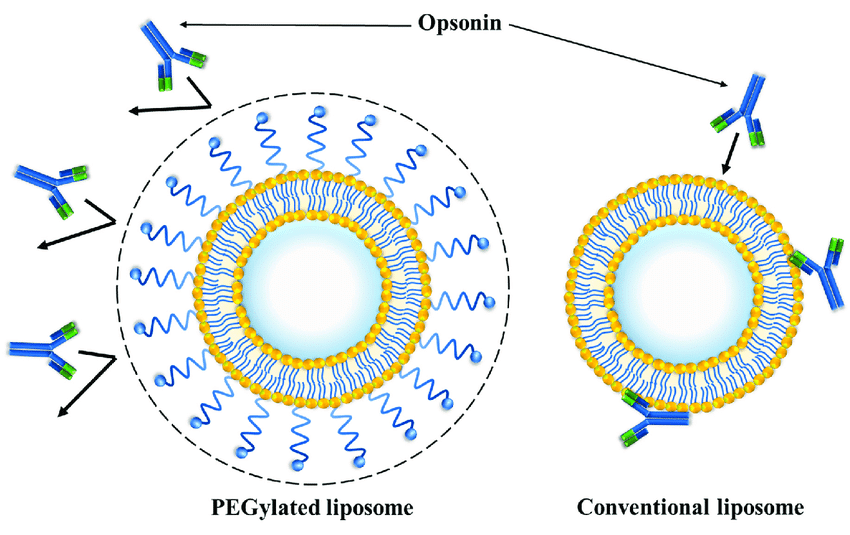 PEGylation, the covalent linking of PEG chains, changes the absorption of the protein corona on the liposome surface, significantly prolongs the circulation time of liposomes, improves the biodistribution of drugs, and achieves enhanced passive targeting of tumors by exploiting the enhanced permeability and retention (EPR) effect at the tumor site. In addition, PEG chains can generate spatial site resistance on the liposome surface, overcoming the van der Waals force of mutual attraction between liposomes, hindering the aggregation between liposomes and improving formulation stability. In 1995, the first PEGylated nanoformulation, Doxil®, a PEGylated doxorubicin liposome, was approved for marketing in the U.S. With great success. Inspired by Doxil®, various PEGylated liposomes entered the clinical trial.

For more than 30 years, liposomes have been blossoming in clinical applications. We searched the approved drug database published on the website of the FDA and EMA, and found that the following liposomal products have been authorized (Table 1). Among them, 2 drugs are PEGylated liposomes, Doxil® and Onivyde®. 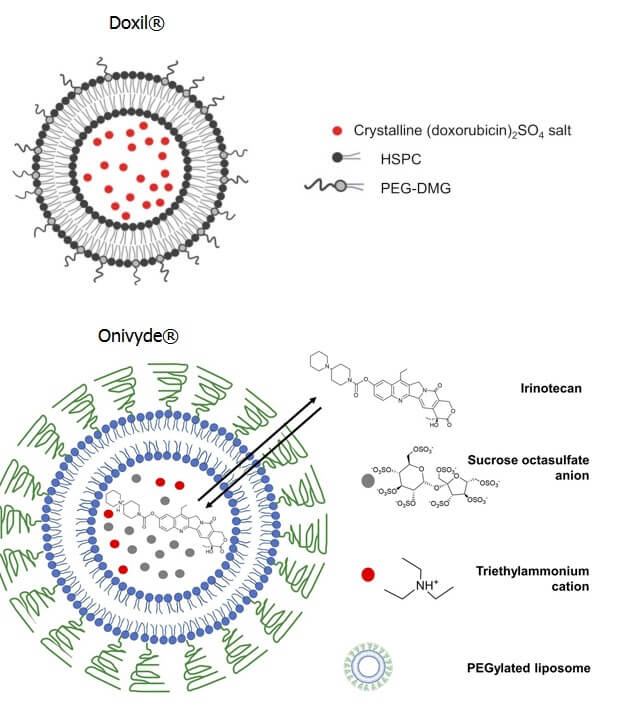 Figure 2. Structure of Doxil® and Onivyde®

Doxil® was the first PEGylated doxorubicin liposome approved in the United States by Sequus Pharmaceuticals, Inc. in 1995, and was first approved for the treatment of AIDS-related Kaposi's sarcoma, and subsequently approved for metastatic breast cancer and multiple myeloma in 2003 and 2007, respectively. The liposomal formulation of Doxil® consists of HSPC, cholesterol (cholesterol) and mPEG2000-DSPE, in the ratio of 56:38:5 on a molar basis, with a PEG modification density of 5%.

Onivyde is a low-density PEGylated irinotecan liposome from Merrimack Pharmaceuticals approved in 2015 for the treatment of patients with metastatic pancreatic cancer with a history of gemcitabine use in combination with calcium folinate and fluorouracil. Onivyde has a liposomal formulation of distearoyl phosphatidylcholine (DSPC), CHOL, and mPEG2000-DSPE in a ratio of 3:2:0.15 on a molar basis, with a PEG-modified density of 0.3%. The drug was present as sucrose octosulfate precipitate in the aqueous phase within the liposomes, with an encapsulation rate of more than 90% and was very stable.

MPEG2000-DSPE used in Doxil and Onivyde, provides "stealth" and sterically stabilized liposomes. The molecular weight of PEG and the mole percentage of PEG-DSPE in lipid composition play important roles on the bilayer packing, circulation time, and thermodynamic stability. The high molecular weight of PEG (>2000 Da) grafted to the lipid headgroup exhibits repulsive forces from the liposome surface, as well as protects liposomes from binding serum proteins and avoids further clearance by the mononuclear phagocytic system (MPS), but also decreases the interaction and endocytosis of liposomes by targeted cells.

PEGylated liposomes take advantage of the EPR effect of tumors to increase the accumulation of drugs at the tumor site with their own long circulation properties, achieving passive targeting of tumors. The EPR effect was proposed by Maeda et al. in 1986, and its basic physiological characteristics are increased vascular permeability, blocked lymphatic return, and infiltration of macromolecules from the blood circulation into the tumor tissue and long-term retention.

The rapid growth of tumors leads to an increased distance between capillaries and the tumor center and a restricted supply of nutrients to the tumor center, resulting in a hypoxic inflammatory environment that promotes the secretion of angiogenic factors such as vascular endothelial growth factor (VEGF), platelet derived gr owth factor (PDGF) and tumor necrosis factor-a (TNF-a), and inhibits the secretion of platelet response factor-1 (TSP-1), resulting in a rapid increase in neovascularization. The irregular structures of tumor neovascularization, heterogeneous spatial distribution, increased blood flow resistance and poor perfusion exacerbate the hypoxic environment at the tumor site. Degradation of the basement membrane (BM) and extracellular matrix (ECM) by matrix metalloproteinase (MMP), and the absence of smooth muscle cells and pericytes necessary for vasoconstriction significantly increase vascular permeability. Blockage of lymphatic vessels in the center of the tumor leads to obstruction of lymphatic fluid return and increases the retention of carriers such as liposomes or large molecule drugs. 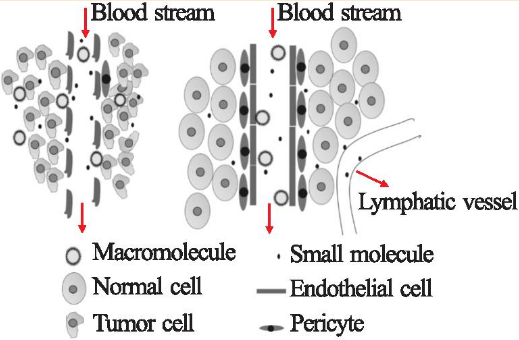 ThermoDox® is a heat-sensitive PEGylated doxorubicin liposome developed by Celsion and Duke University based on lysolipid thermally sensitive liposome (LTSL) technology for the treatment of hepatocellular carcinoma. The heat-sensitive membrane rapidly changes structure when heated to 40ºC-45ºC, creating openings in the membrane that release doxorubicin directly into and around the targeted tumor.

Although four commercialized liposomes loading doxorubicin (Doxil®, Myocet®, Lipodox®, and Liposomal doxorubicin) were already launched into the market successfully, ThermoDox® is a new product with advanced characteristics, that showed a 5-fold release in doxorubicin concentration at the tumor site when compared to Doxil®. Phase III clinical trials of ThermoDox® in combination with standardized radiofrequency ablation (NCT02112656) have been completed.

MM-302 of Merrimack Pharmaceuticals, is a PEGylated liposome modified with antibodies targeting the human epidermal growth factor receptor 2 (HER2) and loaded with doxorubicin, which has applied for phase 1 clinical trial in 2011. MM-302 is designed to overcome the limitations of doxorubicin associated with cardiotoxicity and ineffective targeting of cancer cells. MM-302 was evaluated for the treatment of advanced HER2-positive breast cancer in combination with trastuzumab or trastuzumab plus cyclophosphamide. Promising data from the Phase I clinical trial inspired MM-302 to enter Phase II clinical trials. However, the efficacy results did not show a significant benefit over comparator treatments, which led Merrimack to stop further trials of MM-302 in 2016.

SPI-77 developed by Sequus Pharmaceuticals (Johnson & Johnson) is a liposomal PEGylated formulation of cisplatin, developed for the treatment of recurrent ovarian cancer and stage IV non-small cell lung cancer (NSCLC). It was hypothesized that SPI-77 could mitigate the systemic toxicity of cisplatin and achieve high delivery capacity. However, due to a lack of significant data, in Phase 1 and Phase 2 clinical trials, the manufacturer decided to stop further trials.

2B3-101 is being developed for patients suffering from multiple brain cancer indications, with an initial focus on patients with brain metastases of breast cancer and patients with glioma. 2B3-101 is based on the existing chemotherapeutic agent doxorubicin.

In 2000, Dams et al. discovered the ABC phenomenon in rats. After the first injection of normal liposomes or PEGylated liposomes, a second injection of PEGylated liposomes a few days apart resulted in rapid clearance and increased accumulation in the liver and spleen. This change in the pharmacokinetic properties of liposomes would be a major drawback in their clinical application. If the liposome-encapsulated drug is cytotoxic, the accumulation of liposomes in hepatic Kupffer cells could lead to apoptosis and necrosis of these cells, and recovery of Kupfer cells would take 2 weeks, during which time the development of bacteremia would be fatal for cancer patients.

In recent years, the use of PEGylated liposomes, represented by Doxil®, has become more and more widespread, and the incidence of metabolic reactions in clinical practice has increased. Patients mostly present with symptoms such as dyspnea, facial swelling, chest pain, flushing, rash, hypotension or hypertension, and cardiac pain, which may be life-threatening. Allergic reactions occur in up to 45% of patients treated directly with Doxil® without steroids and antihistamines, and still occur in 4% to 7.1% of patients treated earlier with steroids and antihistamines. The allergic reactions to Doxil® are caused by its PEGylated liposomes, and doxorubicin alone does not cause these reactions.

In view of the serious problems of PEGylation, researchers have been searching for PEG substitutes such as polyinosinic acid, polyglycidol, polyhydroxyethyl-L-asparagine, polysialic acid, and lipid derivatives containing sialic acid fragments. Unfortunately, no ideal PEG substitutes have been found so far. Therefore, the interrelationship between liposomes and the immune system should be taken seriously without deliberately pursuing a "long acting".

Biopharma PEG has been focusing on the development of a full range of PEG lipids for nanocarrier systems (including various types of nanoparticles, liposomes, micelles, etc.), and has accumulated a large number of data models and rich research experience in the construction and optimization of nanocarriers for gene vaccines and protein drugs.