Targeted protein degradation (TPD) is an emerging therapeutic modality that has attracted the substantial interest of drug developers in recent years, and major progress has been made in this area. A major class of molecules that may enable such proteins to be modulated through TPD are known as proteolysis-targeting chimera (PROTAC) protein degraders. PROTACs are heterobifunctional small molecules consisting of two ligands joined by a linker: one ligand recruits and binds a protein of interest (POI) while the other recruits and binds an E3 ubiquitin ligase.

In the 20 years since the concept of PROTAC molecules that use the ubiquitin-proteasome system to degrade target proteins was first reported, TPD has moved from academia to industry, where many companies have initiated preclinical and early clinical development programs. in 2019, the first PROTAC molecules enter clinical trials; in 2020, these trials provided the first clinical proof-of-concept for the modality against two well-established cancer targets: the estrogen receptor (ER) and the androgen receptor (AR). With this success, the TPD field is now ready and committed to tackling ‘undrugged’ targets. 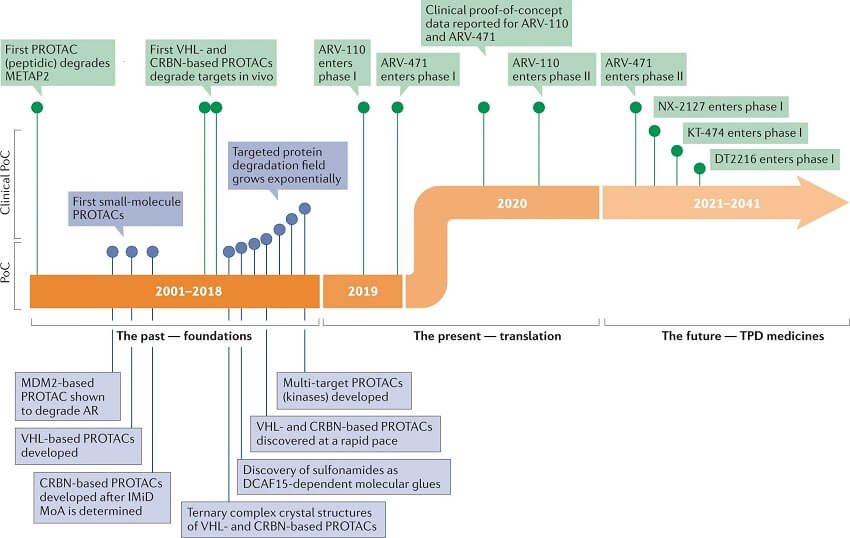 In 2008, the Crews team developed the first small molecule-based PROTAC that effectively degrades AR in cancer cells. This cell-permeable PROTAC contains Nutlin (an E3 ligase MDM2 inhibitor) and a non-steroidal AR ligand (SARM) and links the two through a PEG-based linker fragment.

Since 2013, companies such as Arvinas, C4 Therapeutics, and Kymera Therapeutics have been established to focus on the development of this technology, and pharmaceutical giants such as Merck, Genentech, Pfizer, Novartis, and Boehringer Ingelheim have also laid out their plans for this field. But until 2020, four questions are long overdue for answers.

In 2019, Arvinas' ARV-110 and ARV-471 were the first to enter clinical phase 1, and in 2020 the company published study data that provided clear and positive answers to all four of these questions and also successfully pushed the pipeline into phase 2 accordingly. 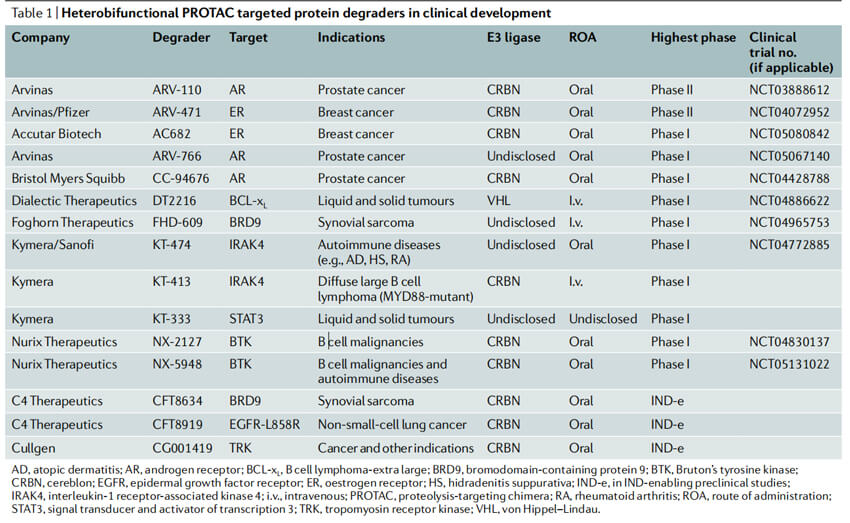 Androgen receptor (AR) activity is a major driver of prostate cancer, so the first line of treatment is "anti-androgen therapy" - lowering androgen levels or blocking the androgen receptor. However, "anti-androgen therapy" is ineffective in 15-25% of patients, who are left in a passive situation with no treatment after desmothering, and this group of patients was selected for the clinical trial of ARV-110, which was administered orally once daily. 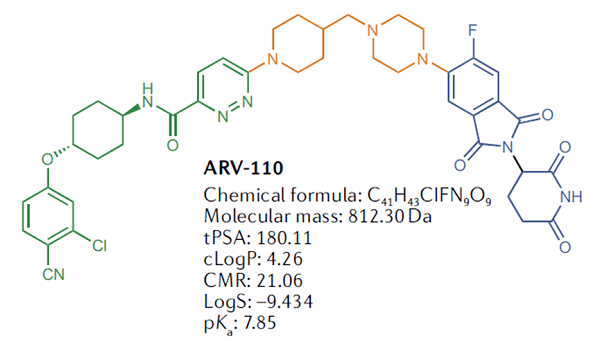 In February 2022, Arvinas released clinical phase 1 dose creep and clinical phase 2 interim data showing that a dose of 420 mg was determined to be safe and is being followed in the ongoing phase 2 clinic. ARV-110 is able to act on specific targets in vivo and has shown preliminary efficacy in treating tumors. 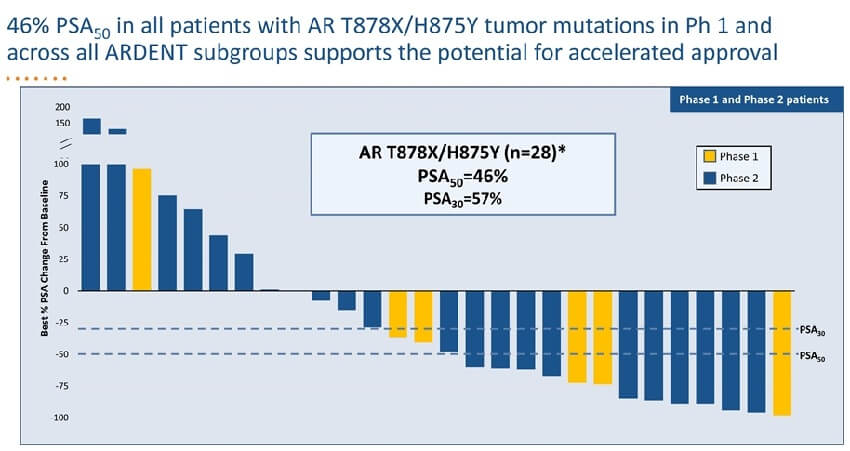 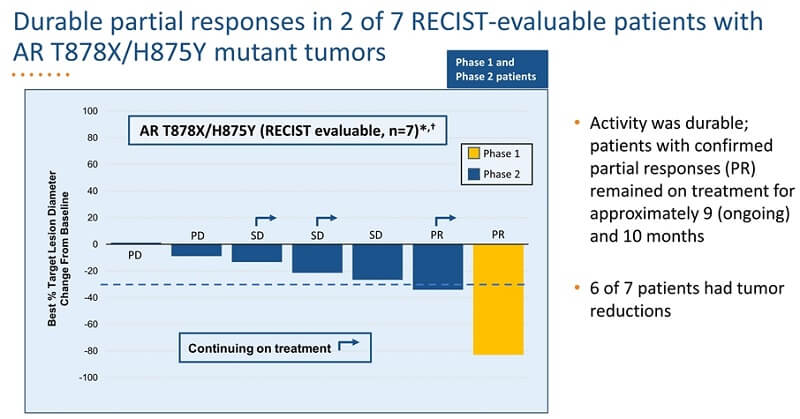 ARV-471 is an estrogen receptor (ER) PROTAC degrader co-developed by Arvinas and Pfizer for the treatment of ER+/HER2- breast cancer. 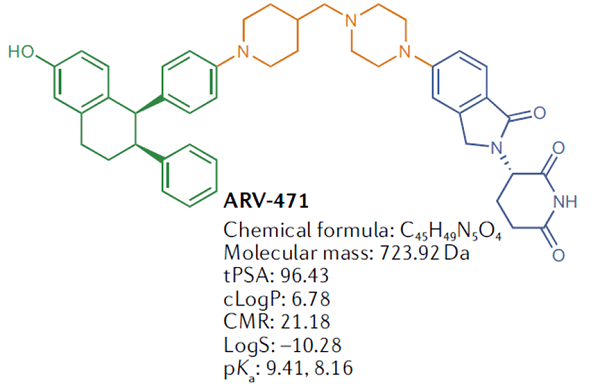 Based on clinical phase 1 results published by Arvinas on December 10, 2021, ARV-471 had a favorable safety profile, with no dose-limiting toxicity observed with a once-daily oral dose of 700 mg in a dose creep trial, provided that the patients had received multiple treatments prior to enrollment. 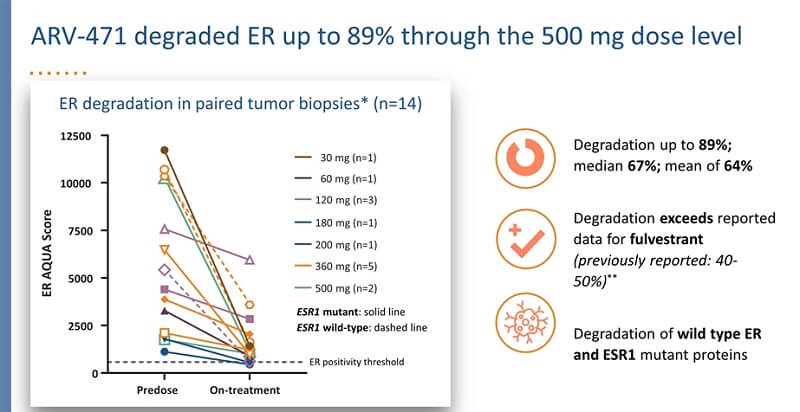 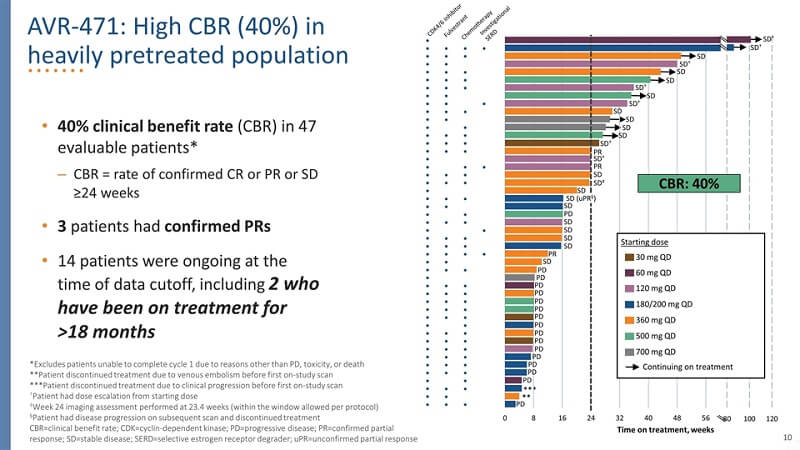 ARV-471 is currently in 2 concurrent trials, clinical phase 2 monotherapy for metastatic breast cancer and clinical phase 1b in combination with the CDK4/6 inhibitor palbociclib.

NX-2127 and NX-5948 from NurixTheraputics is a BTK degrader used to treat a variety of immune inflammatory conditions such as rheumatoid arthritis.

There are several marketed BTK drugs, however, the emergence of the C481S drug resistance mutation has diminished the effectiveness of first-generation BTK inhibitors. Yet, this presents a new opportunity for PROTAC therapy, which does not rely on long-term covalent binding of small molecules to BTK and is therefore not affected by mutations in the binding site on BTK. PROTAC only required relatively weaker non-covalent binding to BTK to recruit E3 proteases to modify and ultimately degrade BTK. Both of NurixTheraputics' BTK degraders are currently in clinical phase 1: NX-2127 for malignant hematomas and NX-5948 for hematomas and autoimmune diseases. 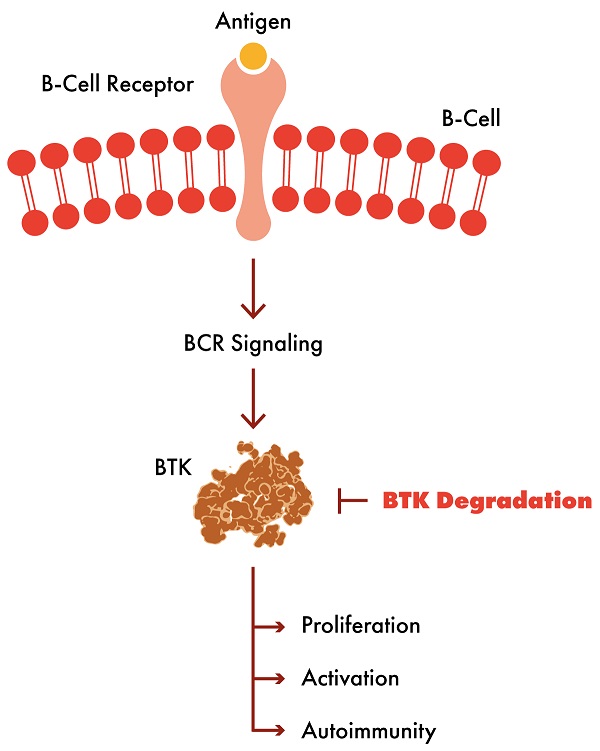 NX-2127 data released by Nurix in October 2021 showed that BTK levels in peripheral blood were significantly reduced in the first six patients enrolled from Day 1 and remained suppressed throughout the dosing period. BTK degradation levels exceeded 80% and 90% in the 100mg/200mg dose groups, respectively.

According to data from a preclinical study of NX-5948 presented by Nurix at the 2021 American Society of Hematology (ASH) annual meeting, NX-5948 significantly reduced BTK protein levels in TMD8 tumor cells and microglia in the brain.

KT-474 is an IRAK4 degrader. No drugs targeting IRAK4 are currently available worldwide, but studies demonstrating that IRAK4 plays a key role in inflammatory responses, B-cell lymphomas are well established and there are several traditional small molecule inhibitors in development, targeting autoimmune diseases.

IRAK4 mediates the IL-1R/TLR downstream signaling pathway and participates in immune monitoring through two pathways: on the one hand, IRAK4 has kinase activity and is able to phosphorylate the downstream proteins IRF5/7; on the other hand, IRAK4 acts as a scaffold structure responsible for the formation of the protein multimer myddosome complex.

Traditional small-molecule inhibitors can only block its kinase activity but not its scaffold structure, a characteristic that determines the inadequate inhibition of IRAK4 by small-molecule inhibitors. In contrast, PROTAC is able to completely degrade IRAK4, blocking both kinase activity and scaffold structure, which theoretically provides better inhibition. 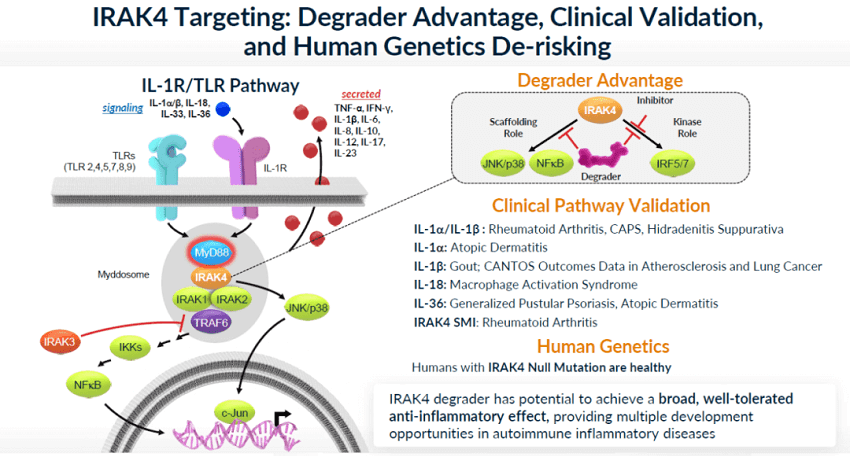 Results of the phase 1 trial showed that a single dose of KT-474 dose-dependently reduced IRAK4 levels in healthy volunteers, and was able to reduce IRAK levels in peripheral blood mononuclear cells by more than 95% at the highest 3 doses tested. 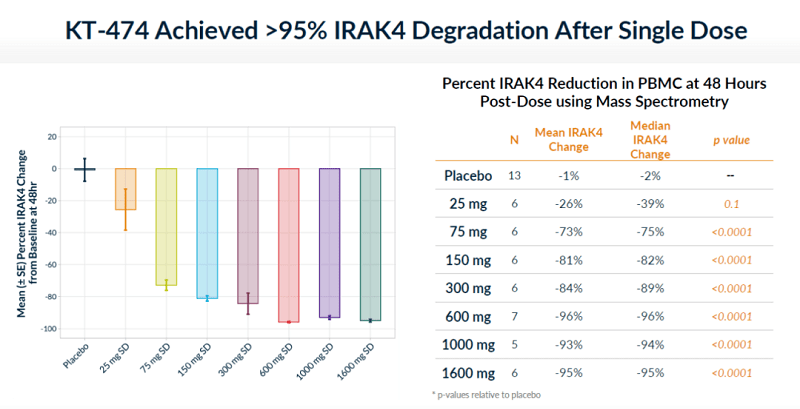 After receiving KT-474 for 24-48 hours, the highest two doses of KT-474 significantly reduced TLR receptor agonist-elicited levels of multiple pro-inflammatory cytokines by up to 97%. 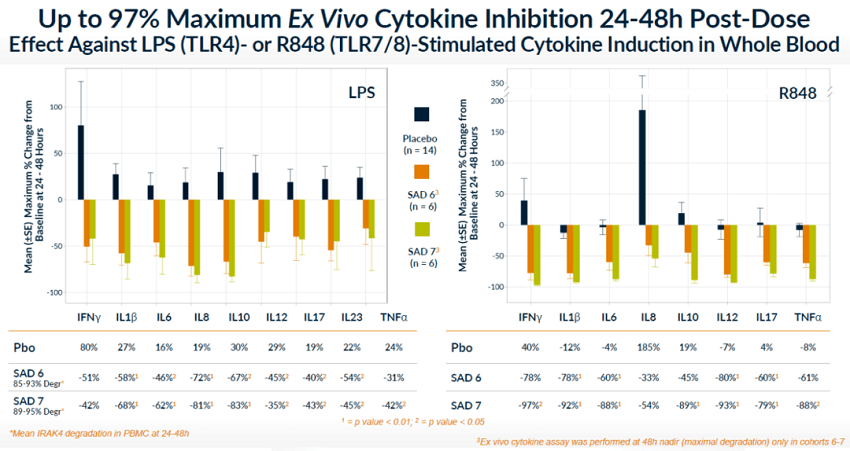 KT-474 demonstrated a good safety and tolerability profile, with the most common adverse events being mild or severe headache or nausea and no serious adverse events.

Most of the first PROTACs to enter the clinic, including ARV-110 and ARV-471, utilized E3 CRBN to degrade the target protein. However, Dialectic Therapeutics' BCL-XL degrader DT2216 employs VHL, which targets hematologic and multiple solid tumors, selectively induces degradation of BCL-XL (B-cell lymphoma-extra large) protein, and stimulates the initiation of the apoptotic program in cancer cells or makes cancer cells more sensitive to chemotherapy. It is currently in clinical phase 1. 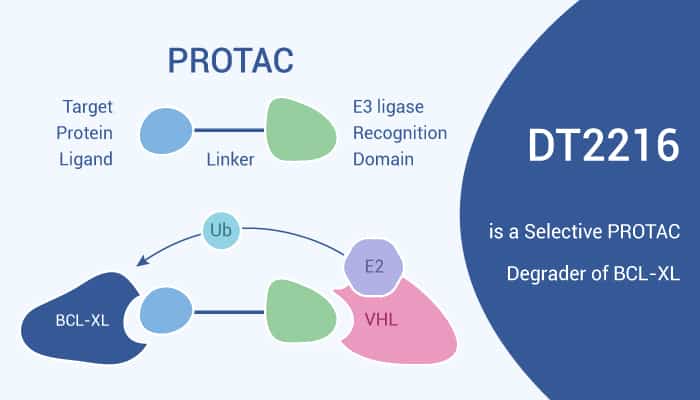 BCL-XL is a member of the BCL-2 family of proteins, which prevents apoptosis and not only promotes cancer progression, but also leads to drug resistance in cancer cells. Therefore, drug development targeting BCL-XL would greatly improve the efficacy of cancer therapy. In previous preclinical studies, DT2216 was able to selectively induce BCL-XL protein degradation, stimulating apoptosis or making cancer cells more sensitive to chemotherapy.

The targeting and dose limitations of common BCL-XL inhibitors kill platelets, leading to a reduction in platelet counts. This toxicity drawback limits the use of BCL-XL inhibitors as safe and effective anticancer agents. However, the data suggest that DT2216 is weakly toxic to platelets, thanks to E3 selection - VHL is in low abundance in platelets.

However, questions are also emerging, and it has been discovered that tumor cells may develop mutations that escape CRBN and VHL-mediated E3 degradation. Of course, as research goes further, new E3s will be discovered.

These heterobifunctional PROTACs in phase I and phase II clinical trials has been truly gratifying. We are excited about the discoveries in basic biology and chemistry that will further advance targeted protein degradation in the decades to come, and we believe this modality has the potential to offer patients new treatment options across diverse indications.

PEG linkers are the most common motifs incorporated into PROTAC linker structures. According to statistics, 54% of the reported PROTAC molecules used PEG as a linker. Biopharma PEG is dedicated to the R&D of PROTAC Linker, providing high purity PEG linkers with various reactive groups to continuously assist your project development.

Related Articles:
PROTACs VS. Traditional Small Molecule Inhibitors
PROTACs and Targeted Protein Degradation
Focus On PROTAC: Summary Of Targets From 2001 To 2019
Four Major Trends In The Development of PROTAC
Molecular Glues: A New Dawn of Small Molecule Drugs After PROTAC