Up to now, there are more than 400 antibody-drug conjugates (ADC) in the development stage (including 14 drugs that have been marketed), with more than 150 publicly disclosed targets covering solid tumors and hematological tumors. Among them, the most popular targets is HER2, followed by CLDN18.2, EGFR and TROP2. Here, let's briefly analyze EGFR-directed ADCs.

Epidermal growth factor receptor  (EGFR) belongs to the ERBB protein family, also known as ERBB1, which is the classical cell membrane surface tyrosine kinase receptor, and HER2 is also a member of this family.

The EGFR is comprised of an extracellular EGF-binding domain, a short transmembrane sequence, and a cytoplasmic region that incorporates a protein tyrosine kinase domain and a C-terminal phosphorylation domain. Upon ligand binding to EGFR, EGFR can exert its kinase activity to activate phosphorylation modifications on ligand tyrosine residues, which will further activate downstream signaling pathways to perform corresponding physiological functions. It can be said that EGFR is a signal transceiver of cells, which can receive growth signals and further amplify them to the following effector pathways, such as PI3K-AKT pathway, to regulate cell growth, proliferation, migration and other physiological processes. 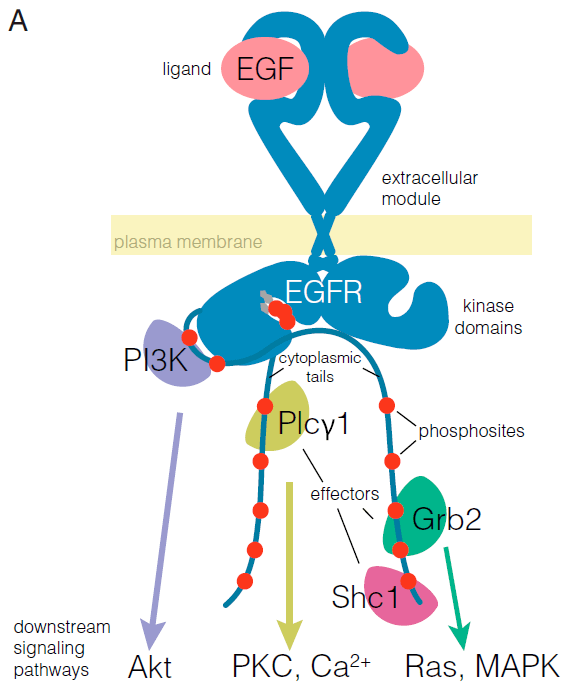 EGFR plays an important role in the cell cycle and is associated with cell growth, proliferation, and migration. Its coding gene is a proto-oncogene, which is not expressed or only limitedly expressed in the physiological state and is not oncogenic. Mutations in the gene encoding this receptor will result in the production of excess EGFR, which enhances cell signaling and predisposes to tumorigenesis. Excessive activation of EGFR is associated with key processes in tumor growth and grading, including proliferation, angiogenesis, infiltration, and metastasis. According to the American Society of Clinical Oncology (ASCO), EGFR mutations account for 30.6% of the total lung cancer population, far more than other cancers.

Currently, the major anti-EGFR treatment includes monoclonal antibodies (mAbs), and Tyrosine kinase inhibitors (TKIs). TKIs bind to the tyrosine kinase domain in the EGFR and stop the activity of the EGFR, while mAbs bind to the extracellular component of the EGFR and prevent EGF from binding to its own receptor, therefore preventing cell division. In recent years, the development of bispecific antibodies and ADCs has led to an increasing interest in this "old" target. 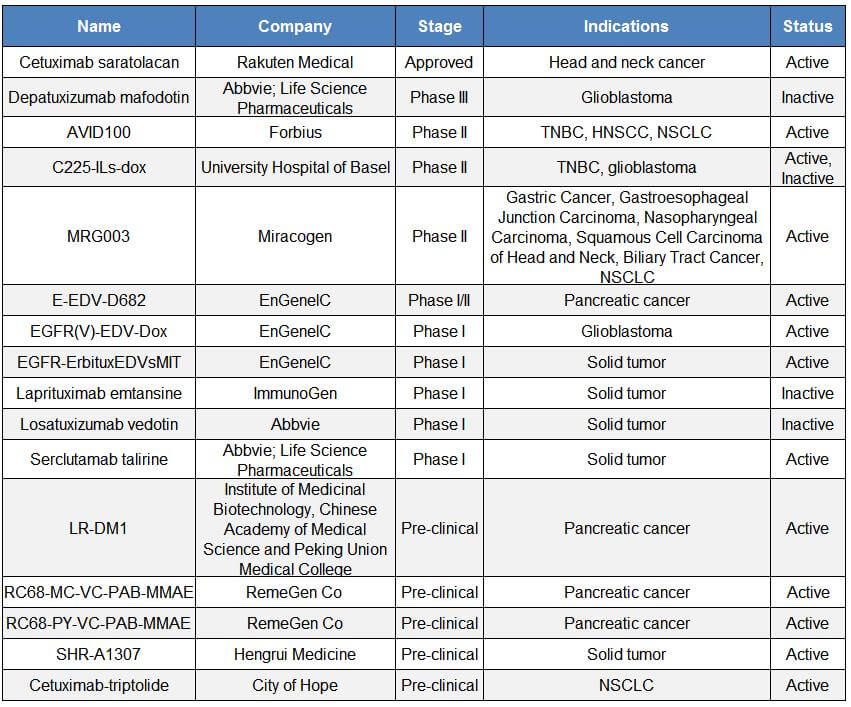 Depatuxizumab Mafodotin (ABT-414, Depatux-M) is composed of a EGFR-specific humanized antibody (ABT-806), a non-cleavable maleimidocaproyl (mc) linker and monomethyl auristatin F (MMAF), which inhibits microtubule assembling.

In May 2019, AbbVie discontinued the Phase III clinical INTELLANCE-1 study of depatuxizumab mafodotin (Depatux-M) for the treatment of patients with EGFR-amplified newly diagnosed glioblastoma. The phase 3 featured 639 patients with newly diagnosed GBM, whose tumours have epidermal growth factor receptor (EGFR) amplification. The randomized, placebo-controlled trial pitted Depatux-M against placebo when administered with concurrent radiation and temozolomide and temozolomide as an adjuvant therapy. The primary endpoint was overall survival, and the interim analysis was based on data from 639 patients. An Independent Data Monitoring Committee (IDMC) recommended the study be stopped due to lack of survival benefit for patients receiving Depatux-M compared with placebo.

AVID100 is a highly potent EGFR-targeted ADC designed to achieve enhanced antitumor effects without a corresponding increase of toxicity in skin or other normal EGFR-expressing tissues. In preclinical studies, AVID100 showed significant anticancer activity in EGFR overexpression tumor models resistant to marketed EGFR inhibitors and, more importantly, only minor skin toxicity was observed. It is estimated that approximately 20% of TNBC patients highly overexpress EGFR, and there are no approved targeted therapies for EGFR overexpressing TNBC. 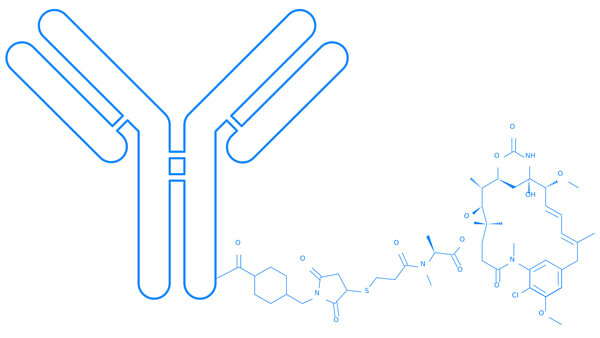 MRG003 is composed of a fully human EGFR-specific IgG1 antibody, a protease cleavable valine-citrulline (vc) linker and monomethyl auristatin E (MMAE). In vitro assays have shown that the antibody fraction of MRG003 promotes rapid endocytosis of MRG003 in tumor cells by virtue of its higher binding affinity to EGFR.

MMAE, a potent antitumor toxin with proven cell killing and bystander effects in a variety of tumor cells, effectively inhibits microtubulin polymerization, thereby interfering with the mitotic process and leading to tumor cell death.MRG003 has demonstrated potent antitumor activity in both preclinical and clinical studies.

MRG003 completed Phase Ib trials in March 2021 and has initiated Phase II clinical trials in China for a variety of EGFR-expressing cancers.

There is a growing interest in EGFR as an ADC target. And also, there are many challenges ahead. Biopharma PEG, as a professional PEG supplier, offers a variety of PEG linkers to facilitate antibody-drug conjugate (ADC) development projects. All PEG linkers are of >95% purity and they are the basic building blocks for a successful ADC.